Hitachi, Ltd. today announced newly developed technique for firewalls which can be applied to high-speed control systems used in fields such as power transmission and distribution systems and factory automation. This technique includes a unique logic circuit which implements a judgment algorithm in "software-less" manner and data invalidation method, which can judge and eliminate unauthorized communication data in about two microseconds. Enhancing security for control devices such as DCSs*1 and PLCs*2 operating with a control cycle time of 10 milliseconds or less, as well as monitoring terminals and control servers, has been difficult with existing firewalls designed for IT networks; however, the developed technique makes it possible regardless of device type or whether the installation is new or existing [see Figure 1]. It is thus expected to reduce loss costs such as damage to plant equipment caused by cyber attacks. From now onwards, Hitachi will practically verify these developed technology so that it contribute to improving the security of control systems. 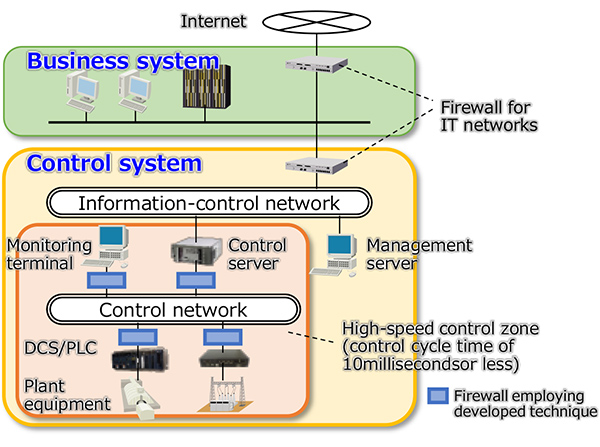 The following architecture and method have been developed for reducing the judgement time.

The result of implemention and evaluatiion of this technique on a FPGA*3 confirmed that the communication data can be judged in 2.12 to 2.2 microseconds through the firewall, which is sufficiently shorter than the control cycle time of general factory automation (1 to 10 milliseconds).

1. "Software-processing-less" architecture for judging communication data preventing it from staying in the firewall

2. Invalidation method of unauthorized communication data that has passed through the firewall

*1
Distributed Control System: A form of a control system configured by connecting multiple control devices via a network or the like.
*2
Programmable Logic Controller: A control device that can control external devices by using a program.
*3
Field Programmable Gate Array: An integrated circuit where the circuit configuration can be rewritten.
*4
Frame Check Sequence: The answer value for verification to make sure that the communication data was received correctly.