With many parts of Europe having experienced unprecedented high temperatures last year, further measures for achieving the Paris Agreement target of limiting global warming to 1.5°C were discussed at the 25th Session of the Conference of the Parties to the United Nations Framework Convention on Climate Change (COP25) held in December in Madrid, Spain. Japan, too, has continued to suffer damage from severe typhoons, reinforcing awareness of the urgent need to improve resilience. In the energy sector, meanwhile, questions are being asked about the form of energy systems as they continue to undergo irreversible changes, including renewables becoming a mainstream source of energy, energy networks becoming more distributed, and greater use of digital technology together with electrical and electrically driven equipment.

In anticipation of these changes, the University of Tokyo and Hitachi, with a shared vision for how industry and academia can build a better society, established Hitachi-UTokyo Laboratory as part of a new scheme for collaborative creation between these two sectors and embarked on a study of energy systems for Society 5.0. 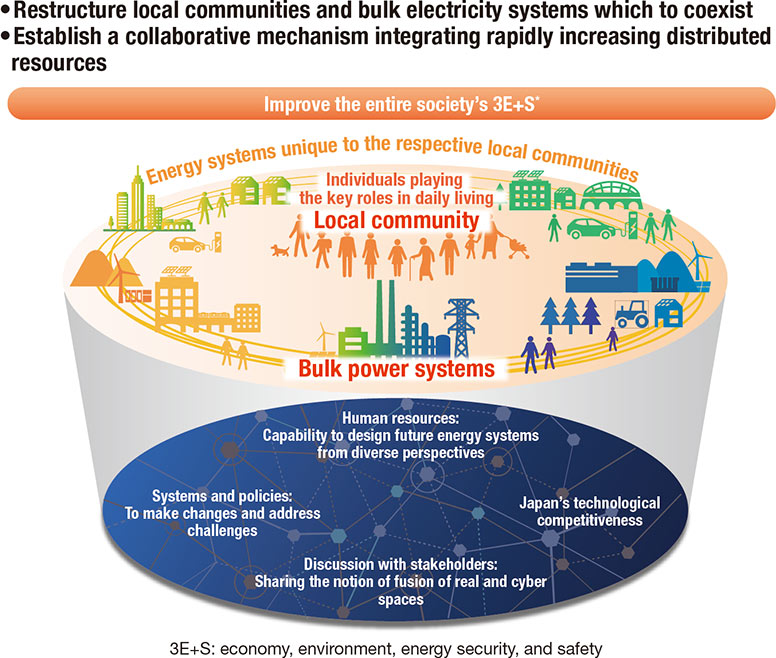 Individuals are the key players in the world of Society 5.0 and energy systems will be built to suit the particular characteristics of different communities. These communities will utilize people’s imagination to overcome various challenges, energy among them, and actively create new value. To this end, the operation of various different forms of infrastructure, including things like information and communication technology (ICT), vehicles, and logistics as well as electricity, gas, and water, will be coordinated along with the redevelopment of mechanisms for allocating energy in ways that are appropriate to the community. The aim is to deliver a diverse range of benefits such as CO2 emission reductions, local economic activity, convenient living, and resilience to disaster. This will involve the establishment of infrastructure and practices for distributing the value represented by energy not only in terms of quantity, but also of quality, such as the ability to balance supply and demand for renewable energy. Electrical grid systems will be rebuilt on the basis of coordination with communities, with policies and practices put in place across Japan’s entire power system that will deliver “economy, environment, energy security, and safety” (3E+S).

As a means of achieving this ideal, Hitachi-UTokyo Laboratory is undertaking the following studies.

Livening up Debate on Systemic Reform

Discussions on reforming the systems governing energy has been on the rise around Japan since the first announcement of results from the work of Hitachi-UTokyo Laboratory in April 2018. Last year, a number of groups were set up to discuss reform of the electric power system, including the Ministry of Economy, Trade and Industry’s Subcommittee for Sustainable Power Systems, with options for systemic reform being raised to enable the achievement of resiliency and the transformation of renewables into a mainstream source of electric power in pursuit of decarbonization. One key area of work is the reform of distribution arrangements to deliver both greater investment and efficiency gains in the electricity sector. Progress is also being made on establishing systems for the release and dissemination of data and on clarifying who pays for what. The Japan Business Federation (Keidanren) also published a policy document entitled, “Rebuilding Japan's Electricity System,” that identified the need for new policies for electricity in order to achieve Society 5.0.

This year, the Hitachi-UTokyo Laboratory plans to present a third report on the results of work to date. Whereas the second report(1) issued last year primarily looked at work on decarbonization in the electricity sector, the third report has a wider scope that adopts a long-term perspective on how coordination with manufacturing, distribution, and other industries outside the electricity sector can help achieve the Sustainable Development Goals (SDGs). The plan for the future is to intensify the release and dissemination of information on technological options in a quantitative and objective manner with a view to developing rules and practices that will circulate these new forms of value.

Amid rapid changes in society, discontinuous innovation that goes beyond business-as-usual in existing systems will be essential if energy systems are to resolve complex societal challenges and improve people’s quality of life (QoL). This calls for the main grid systems, regional communities, consumers, and suppliers to all cooperate on putting their wisdom to work on achieving innovation.