Convenient Cash Card Services in the Era of Mobiles and Smartphones

Convenient Cash Card Services in the Era of Mobiles and Smartphones

The number of services using IC cards is expanding steadily, including electronic money, credit cards, and the use of staff IDs for access control. The finance sector is no exception, and numerous banks issue IC cash cards and provide services that combine them with biometric authentication and other technologies. The term “mobile cash card service” refers to the storage of account numbers and other information kept on cash cards in an NFC-enabled smartphone so that it can be used in place of the card. A high level of security is maintained by keeping the cash card information in a secure area on the smartphone and using a secure API for interconnecting between the smartphone and bank systems. Users typically keep their smartphones with them, and these services enable their use for a variety of banking transactions. This article describes how Hitachi sees banking transactions being conducted in the future in terms of the convenience provided by using a smartphone as a mobile cash card. 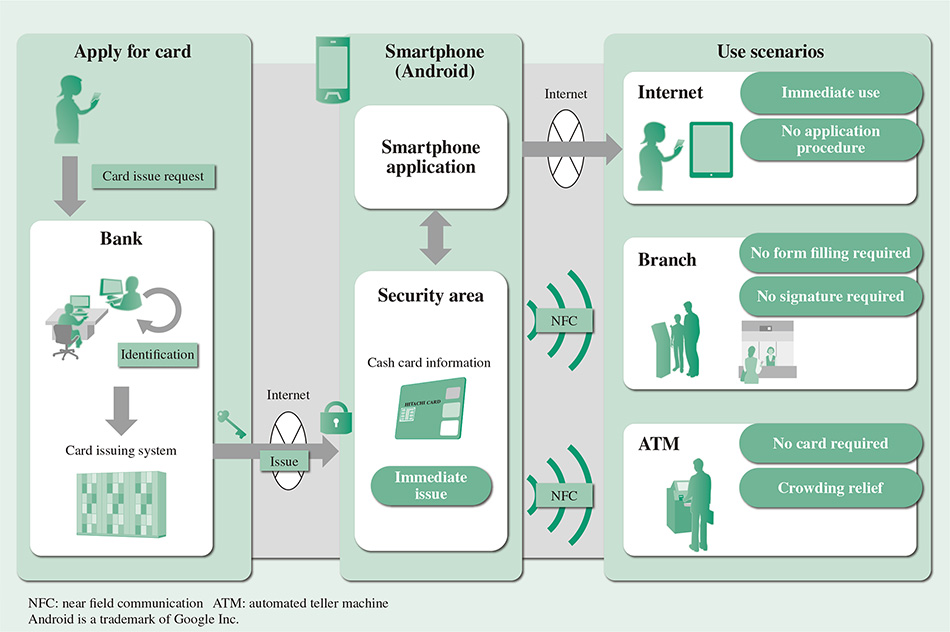 INTEGRATED circuit (IC) card services can be found in many areas of our daily lives, including the use of public transportation cards (electronic money) to pay for fares or vending machine purchases, and the use of staff identification (ID) cards for building access control. Similarly, the issuing of IC cards by banks for credit cards and cash cards enables them to provide financial services that customers can use with peace of mind. Hitachi has contributed to the realization of financial systems that combine encryption and authentication technologies to ensure a high level of security through its past development of IC card systems for banks.

Currently, the IC cards issued by banks are contact-based, meaning they require physical contact between the IC chip and the reader. In contrast, the use of contactless IC cards is growing in the transportation sector with Suica*1 and PASMO*2 cards, and in the public sector with the basic resident registration card and driver's license cards, all of which are able to transfer data simply by tapping the card on the reader. Meanwhile, commercial services that operate on near field communications (NFC) and use a smartphone in place of an IC card are starting to emerge against the backdrop of a rapid penetration of smartphones throughout society. From the point of view of offering greater convenience to customers, banks also require a different approach from that adopted in the past, including the development of new services that utilize smartphones. This article describes the mobile cash card service Hitachi is working on that is intended to achieve this.

Prior to the emergence of IC cash cards, the standard practice was to use cards that have a magnetic stripe. The vulnerabilities of these cards have been pointed out, including their ease of falsification and the potential for users to divulge their four-digit personal identification number (PIN).

In March 2001, the Japanese Bankers Association (JBA) formulated a standard inter-bank specification for cash cards that covered the use of IC cards, automated teller machines (ATMs), and other devices for cash card transactions and related activities, “JBA IC Cash Card Specifications.” The purpose of the standard was to improve user convenience, to expand business opportunities, and to enhance security. Losses from fraudulent withdrawals made using counterfeit magnetic stripe cash cards have prompted the ongoing adoption of IC cards, because these are difficult to counterfeit.

In the past, using a cash card at an ATM involved taking the card from the wallet and inserting it into the ATM, then putting the card back in the wallet after completing the transaction. Once it was put in a wallet, the card was of no further use until the next time it was inserted into an ATM. But imagine instead what might be possible if the cash card had its own input and communications capabilities.

Mobile cash cards store the account and other card information required for banking transactions in a secure area on an NFC-enabled smartphone so that it can be used in place of a conventional cash card. Moreover, some procedures, such as entering transaction instructions at an ATM or filling out forms at a branch, can be performed at any time or place with the mobile cash card.

THE CONVENIENCE OF MOBILE CASH CARDS

This service will enable bank users to make cardless transactions at banks using an NFC-enabled smartphone.

Fig. 2—Using a Mobile Cash Card with an ATM. 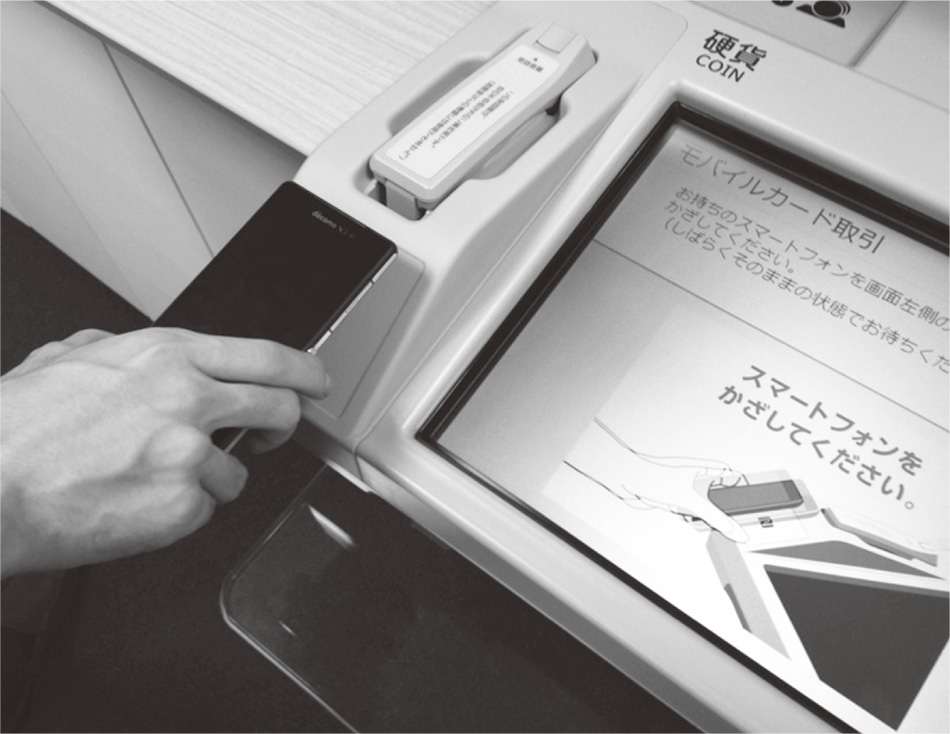 The ATM is reading the cash card information stored on the smartphone.

Mobile cash cards can replace inserting a cash card at an ATM and most operations on the ATM screen. Specifically, the ATM reads the cash card information when the customer taps the smartphone on the NFC reader installed in the ATM (see Fig. 2). In this case, if transaction instructions have already been loaded into the mobile cash card, the ATM can read these also, at the same time. Because tapping the smartphone on the NFC reader invokes reading of its data, even if the device is in sleep mode, there is no need to operate the smartphone while standing next to the ATM. After the data has been read, the customer provides identification using the authentication required for the transaction in the same way as they would when operating the ATM using a cash card, and the transaction is completed.

This is anticipated to improve convenience because it reduces the number of steps that the user must perform at the ATM and enables them to complete withdrawal or other banking transactions quickly. For banks, the technology can be expected to relieve crowding at ATMs.

At a bank branch, mobile cash cards can be used as an alternative to filling out the paper forms provided at the customer counter. If the information that is normally entered into forms for opening an account or exchanging currency is preloaded into the mobile cash card instead, the cash card information and transaction details can be read at the same time by tapping the smartphone on the NFC reader at the counter (see Fig. 3). It is no longer necessary to enter transaction details at the bank branch, the user can enter this information using their own smartphone at any time. After that, the user can visit the bank branch and complete the transaction.

For users, this eliminates the need to spend time filling out paper forms at the bank branch's customer counter, while for the bank, linking the data should reduce the amount of time spent on administrative procedures at the counter. This should shorten waiting times for users at the bank branch.

In the past, when it has not been possible to issue a cash card immediately to a customer who has opened an account at a branch, it has typically taken about a week for the cash card to be delivered by post. In contrast, a mobile cash card can be made available for use much more quickly because it can be provided immediately by performing the steps from opening the account to authorizing the smartphone for use as a mobile cash card all at once. In the future, it is anticipated that issuing of plastic cash cards will become unnecessary.

Transaction information that has been preloaded into the smartphone is being read at the counter. Transactions from opening an account to issuing a mobile cash card can be performed on the spot.

Balance inquiries and other bank transactions can be made via the Internet by using a mobile cash card for personal identification. Specifically, when preloading instructions for withdrawing cash into a smartphone using the ATM operations described above, the user can check their current balance to help decide how much money to withdraw.

In the case of transactions that do not involve cash, a mobile cash card can be used in the same way as Internet banking for things like transferring funds or giving notification of a change of address.

When incorporating cash card functions into a smartphone, maintaining security must be given the greatest consideration. By using encryption, authentication, and other technologies developed for IC card systems, Hitachi has succeeded in providing mobile cash cards with a high level of security equivalent to that of IC cards.

The secure area in the smartphone is located on the universal integrated circuit card (UICC) provided by the carrier, which includes anti-tamper functions, and the information stored on the UICC cannot be read by anyone except the issuer of the mobile cash card. This protects the cash card information from unauthorized applications and devices.

While mobile cash cards are known to improve user convenience in a variety of ways, a number of challenges remain with respect to their wider adoption.

The first challenge is how to serve users who have non-Android phones. Currently, third-party access to the NFC chip is restricted on smartphones in some cases. Such phones will become compatible with mobile cash cards in the future, when this restriction is lifted.

The second challenge involves how to link to carriers. Subscriber identity modules (SIMs) supplied by other than the three major carriers have been proliferating in Japan recently, and these companies have the potential to gain a significant market share in the future. In the years ahead, Hitachi plans to work on ways of providing mobile cash cards that do not depend on the carrier-supplied UICC [such as by using host card emulation (HCE)].

The third challenge is the popularization of NFC readers for installing in ATMs and the interoperability of this technology between banks. Just as magnetic stripe cash cards are still in use, it is anticipated that it will take some time for the number of ATMs that recognize mobile cash cards to increase and for interoperability to be achieved. In the meantime, it is necessary to continue providing users of mobile cash cards with an IC cash card that they can also use.

Hitachi intends to continue working on overcoming these challenges while keeping an eye on trends in the industry.

This article has described a vision of the future that will be brought by services that store the functions of banking cash cards in smartphones.

In addition to the use of NFC for banking transactions, as described in this article, other new cardless transaction services that can provide an alternative to cash cards are currently at the stage of being trialed by various banks, including the use of biometric information and QR Codes*3. These developments are indicative of a finance industry in which multiple innovations are starting to break out rapidly and in great numbers simultaneously. With progress also being made on supporting finance industry innovations in the areas of supervisory agencies and legislation, it is anticipated that the environment will continue to mature.

Hitachi intends to continue contributing to the realization of new financial services in its role as the best partner of banks.

*3
QR Code is a registered trademark of DENSO WAVE INCORPORATED in Japan and in other countries.