Railway systems have a smaller impact on the environment than other means of transportation such as automobiles and airplanes. Thanks to advances in induction motors and power devices (a core technology for power electronics), the performance, efficiency, miniaturization, and reliability of rolling stock traction systems have been enhanced. Hitachi, Ltd. has developed energy-efficient traction drive systems and traction systems through the use of compact inverters that use low-loss power devices based on a new material, SiC, as well as induction motors designed for lower harmonic losses, the development of PWM control techniques, and improved running profiles. Hitachi is taking advantage of these developments to meet the demand from railway operators for energy efficiency, while continuing to promote global expansion, and to supply railway systems that excel in safety, comfort, and environmental performance. 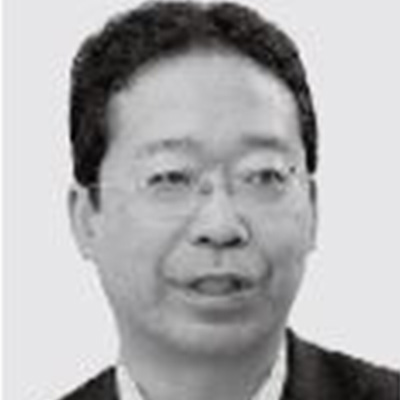 Process Designing Department, Mito Rail Systems Product Division, Railway Systems Business Unit, Hitachi, Ltd. He is currently engaged in the coordination of the development of power converters for railway vehicles. Dr. Ishikawa is a senior member of the Institute of Electrical Engineers of Japan (IEEJ). 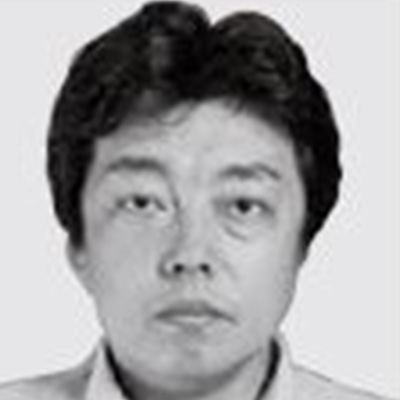 Rolling Stock Electrical Systems Design Department, Mito Rail Systems Product Division, Railway Systems Business Unit, Hitachi, Ltd. He is currently engaged in the coordination of the development and design of power converters for railway vehicles. Mr. Terasawa is a member of the IEEJ. Process Designing Department, Mito Rail Systems Product Division, Railway Systems Business Unit, Hitachi, Ltd. He is currently engaged in the development of the control systems of power converters for railway vehicles. Mr. Sakai is a member of the IEEJ. 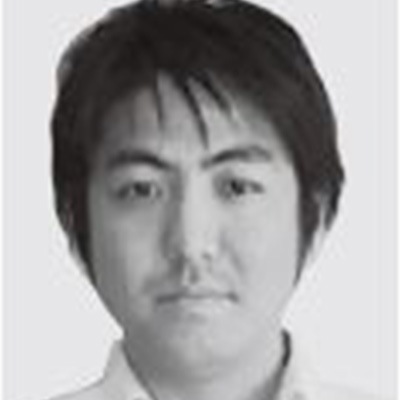 Motor Systems Research Department, Center for Technology Innovation – Controls, Research & Development Group, Hitachi, Ltd. He is currently engaged in the research and development of main electric motors for railway vehicles. Mr. Sugimoto is a member of the IEEJ. 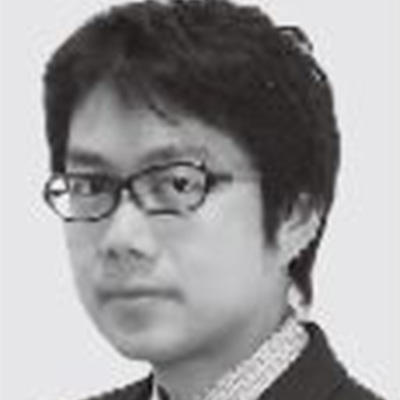 RISING international awareness of the environment in recent years has increased demand for improvements in energy efficiency, including reducing carbon dioxide (CO2) emissions to prevent global warming and using electric vehicles to minimize atmospheric pollution caused by the exhaust emissions of internal combustion engines. The role of railways, which are significantly more efficient than other forms of transportation such as automobiles and airplanes, is becoming more and more important in achieving these goals(1).

This article reports on miniaturization and energy-efficient technologies that address these challenges.

Changes in Power Devices and Features of SiC Devices

High-voltage IGBT modules are now commercially available in 3.3-kV, 4.5-kV, and 6.5-kV models(3). Advances have also been made in recent years in the development of low-loss power devices that use a new material, SiC. SiC has a higher breakdown electric field strength than Si, so diodes can be reduced to only one tenth the thickness of Si diodes. As a result, in theory, the resistance of diodes during conduction can be made more than two orders of magnitude smaller. This helps make power devices smaller and has the potential to enable smaller inverters with simpler cooling systems.

TABLE 1. Measures for Reducing Inverter Volume The inverter is made smaller by reducing the size of the SiC modules and cooling system, and by reducing the number of internal components. 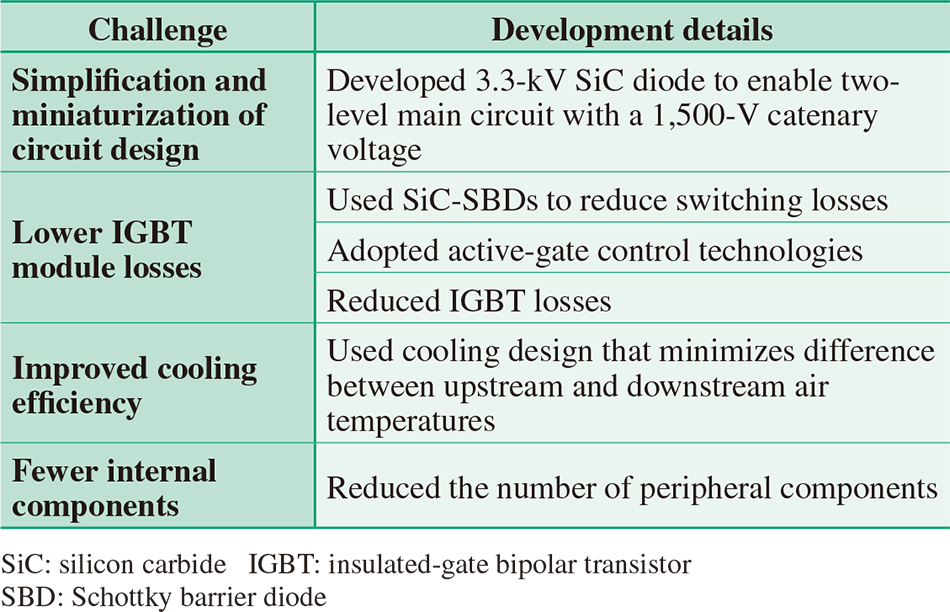 Hitachi led the world in developing a SiC Schottky barrier diode (SBD) for railway applications(4)–(6). Roughly 90% of the electrified sections of track in Japan operate with a catenary voltage of 1.5 kV, and this voltage is also common globally. With a catenary voltage of 1.5 kV, a two-level main circuit design can be achieved using 3.3-kV devices, resulting in a simpler configuration of the main circuit because only two devices are required per phase (compared to six for a three-level design).

Table 1 shows ways of reducing the volume of an inverter.

Together with the adoption of SiC-SBDs and the use of active-gate control technologies to reduce switching losses, improvements in IGBT performance have also reduced inverter losses by 35% (see Fig. 1)(7), (8).

By reducing their losses, the SiC modules have been made smaller. Fig. 2 shows a comparison between a SiC module and a conventional 3.3-kV/1,200-A IGBT module. The mounting footprint was reduced to about two-thirds, with the same output density.

Hitachi has also developed a cooling method that improves the cooling efficiency of power devices, and reduced the number of internal components to make its inverters 40% smaller and lighter (see Fig. 3).

Fig. 1—Comparison of Total Losses for IGBT and SiC Modules. 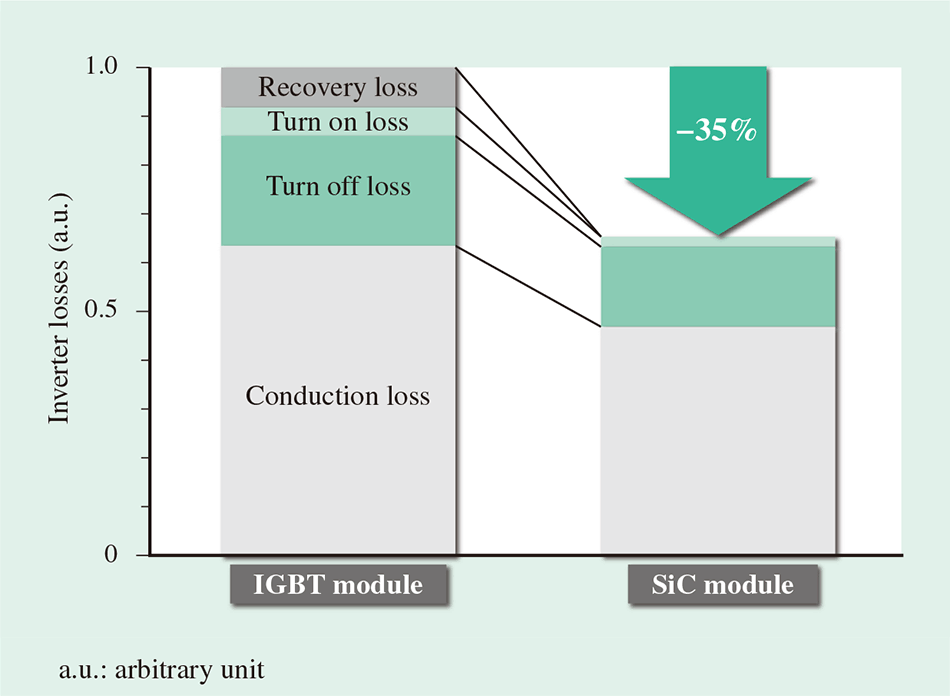 The adoption of SiC diodes, improvements in IGBT performance, and the adoption of active-gate control technologies reduces losses by 35%.

The mounting footprint is reduced to about two-thirds, with the same output density.

The new inverter is 40% smaller in terms of both weight and volume.

To provide high efficiency drive systems, Hitachi has reduced the energy consumption rate for railway vehicles by expanding the area outputting regeneration torque to minimize use of the pneumatic brakes. Hitachi has also focused on the high harmonic losses of induction motors to reduce power consumption by optimizing the induction motor design and PWM control techniques (see Fig. 4). 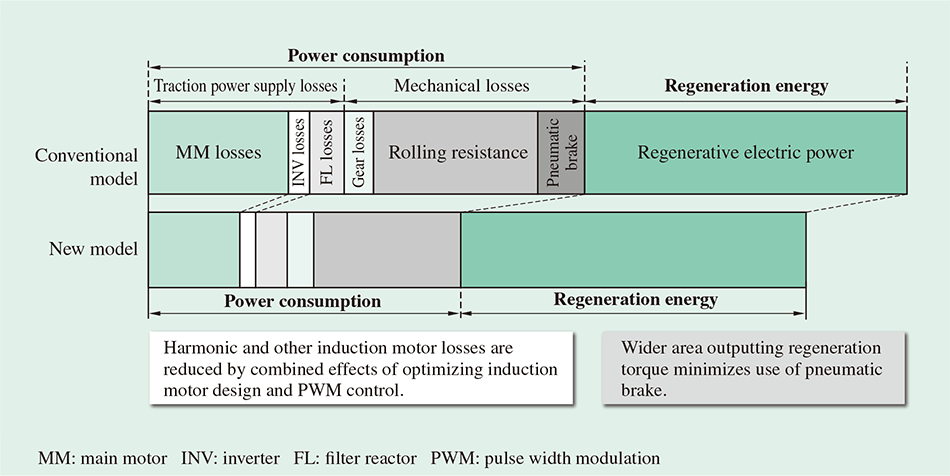 Induction motor losses are typically classified as primary copper loss, iron loss, mechanical losses, and stray load losses including harmonic losses. Primary copper loss and iron loss occur as the results of the fundamental (sine wave) component of the waveform. Mechanical loss occurs due to mechanical factors when the induction motor rotates. Harmonic losses include both losses due to the structure of the induction motor, and losses due to distortion of the PWM voltage waveform when driving the inverter.

Although past induction motors have adopted open designs to bring in cooling air from the outside, the use of a fully-enclosed design saves maintenance because it prevents dust from getting into the motor. Primary copper loss has also been reduced by optimizing the stator and rotor designs.

The next step was to reduce harmonic losses by optimizing PWM. Fig. 6 (a) and (b) show the relationships between output voltage and the inverter output fundamental wave frequency and PWM carrier frequency used for PWM control. The motor switches between three different newly developed PWM control techniques depending on the speed.

The harmonic losses in the new motor are roughly 50% less than the conventional motor. 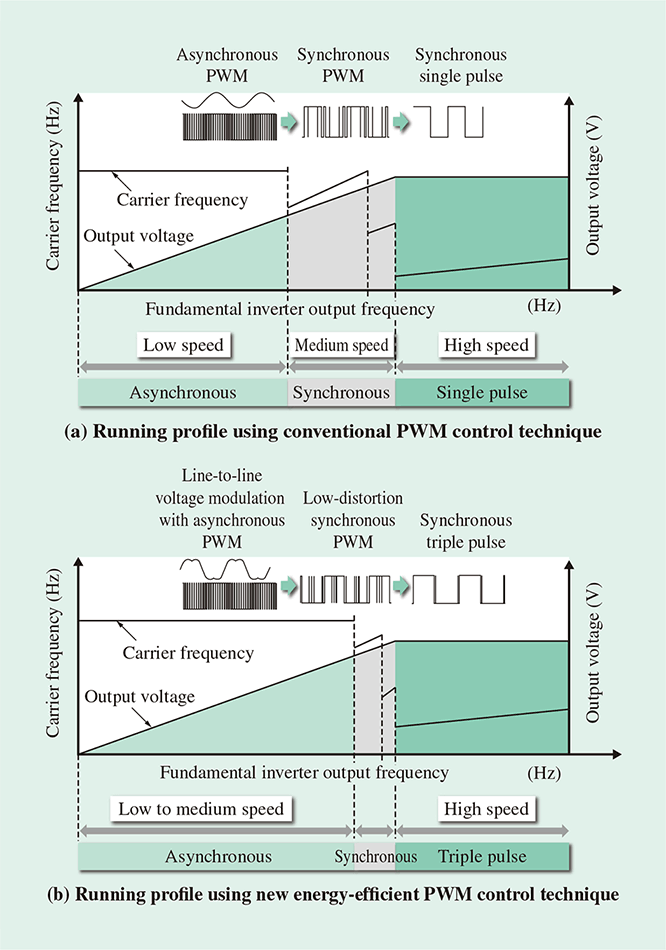 The new inverter reduces harmonic losses by switching between three different PWM control techniques depending on the speed. 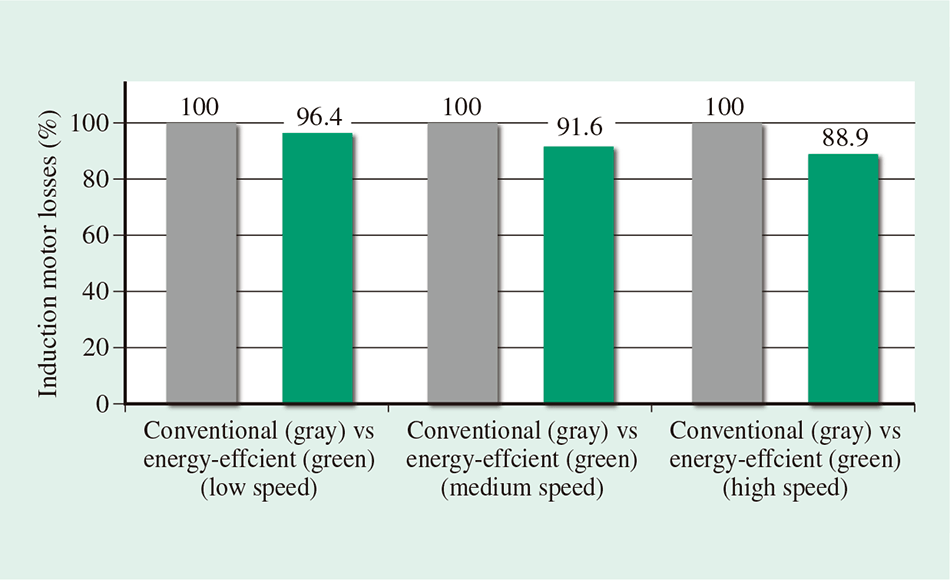 Fig. 8—Verification of Energy Efficiency on Suburban and Commuter Services. 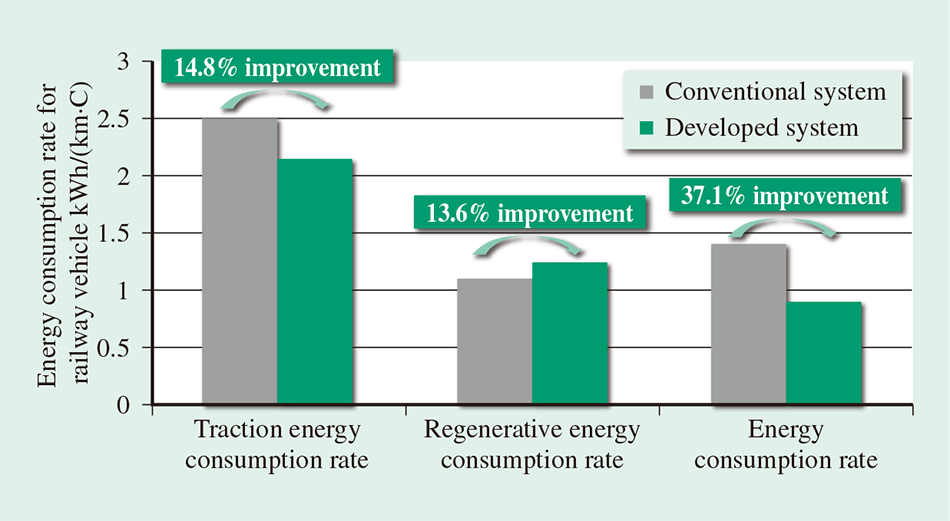 The energy consumption rate for a railway vehicle was approximately 40% lower than the conventional system.

The energy consumption rate for a railway vehicle achieved by using SiC modules, induction motors with lower harmonic losses, and PWM control, and by expanding the area outputting regeneration torque, was 37.1% lower relative to conventional systems when tested on existing rolling stock operating on suburban and commuter lines(11) (see Fig. 8). 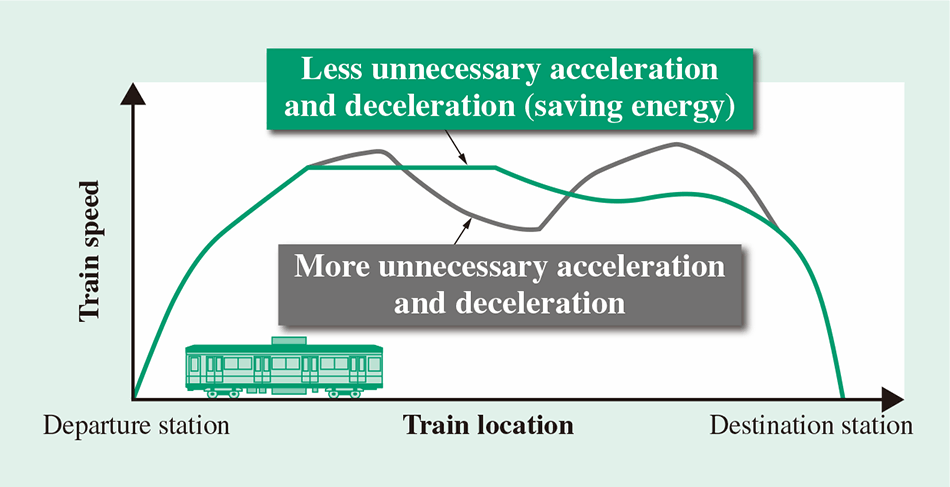 The operation of the train between stations (time spent powering, cruising, coasting, and braking) is determined in a way that reduces energy consumption while still arriving on time. 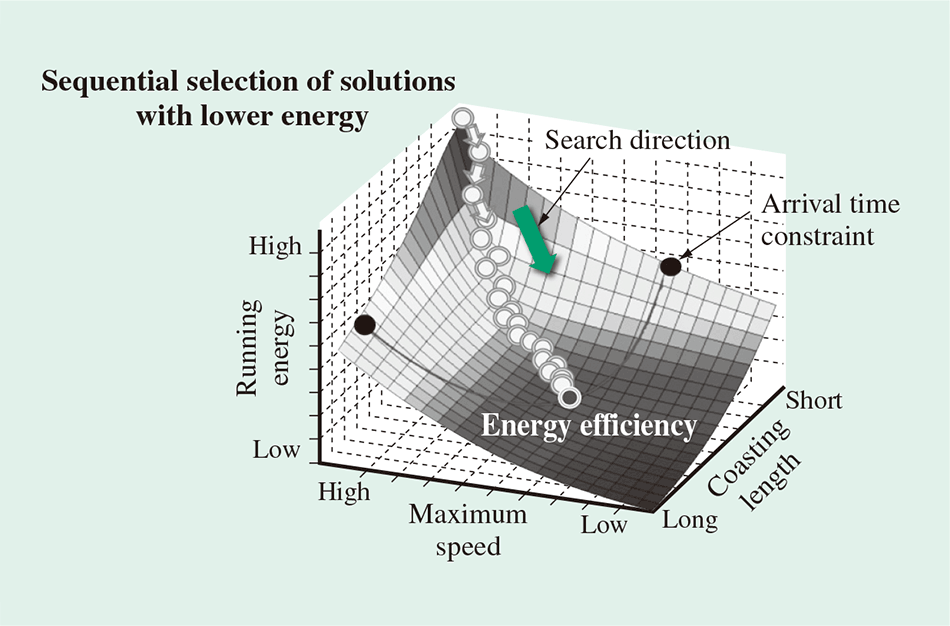 The algorithm obtains a running profile that uses less energy while still arriving on time by progressively decreasing the maximum speed and lengthening the time spent coasting.

The energy consumed to achieve the arrival time specified in a traffic plan can vary depending on the running profile of the train between stations, meaning the amount of time spent powering, cruising, coasting, and braking (see Fig. 9). Hitachi developed an algorithm for obtaining running profiles with low energy consumption so as to achieve energy-efficient operation control(12), (13).

In sections of track where the typical sequence involves powering, cruising, coasting, and then braking, energy consumption is reduced by lengthening the travel time (reducing the maximum speed and spending more time coasting). The developed algorithm takes advantage of this, starting with a top-speed running profile for the section of track and then progressively reducing the maximum speed and lengthening the coasting time by small increments to obtain a running profile that uses less energy but still arrives on time (see Fig. 10). The search process of the developed algorithm also includes a way to update a running profile so that gravitational energy can be used to accelerate the train (when traveling down a gradient). This feature means that using the running profiles obtained by the developed algorithm enables energy-efficient operation control according to the topography of each railway line.

Hitachi has developed compact energy-efficient traction drive systems by adopting individual advanced technologies, including SiC power devices and highly efficient induction motors, and combining these with new techniques that have been enhanced through the use of analytical techniques that it developed leveraging precise, sophisticated simulations.

Hitachi is meeting the demand from railway operators for energy efficiency, while continuing to promote global expansion, and to supply railway systems that excel in safety, comfort, and environmental performance.