To enable adaptation to new mutual through services between multiple Shinkansen train companies, the authors and their respective companies (hereafter, collectively, “we”) jointly developed two new functions for the onboard DS-ATC equipment used in Shinkansen rolling stock. One function divides the onboard DB (containing speed check patterns) into separate DBs managed independently by each train company, and the other function handles switching from one onboard DB to another while crossing company boundaries. Since the onboard DBs are an important safety element, we started by creating an organizational structure for building them, and approached development in a coordinated manner while listening to the opinions and requests of the client companies. We then implemented the new functions while operating the system and limiting changes in the existing DS-ATC system to only minor ones. Currently, the new system is running smoothly in the mutual through services between the Hokuriku Shinkansen and Hokkaido Shinkansen companies. 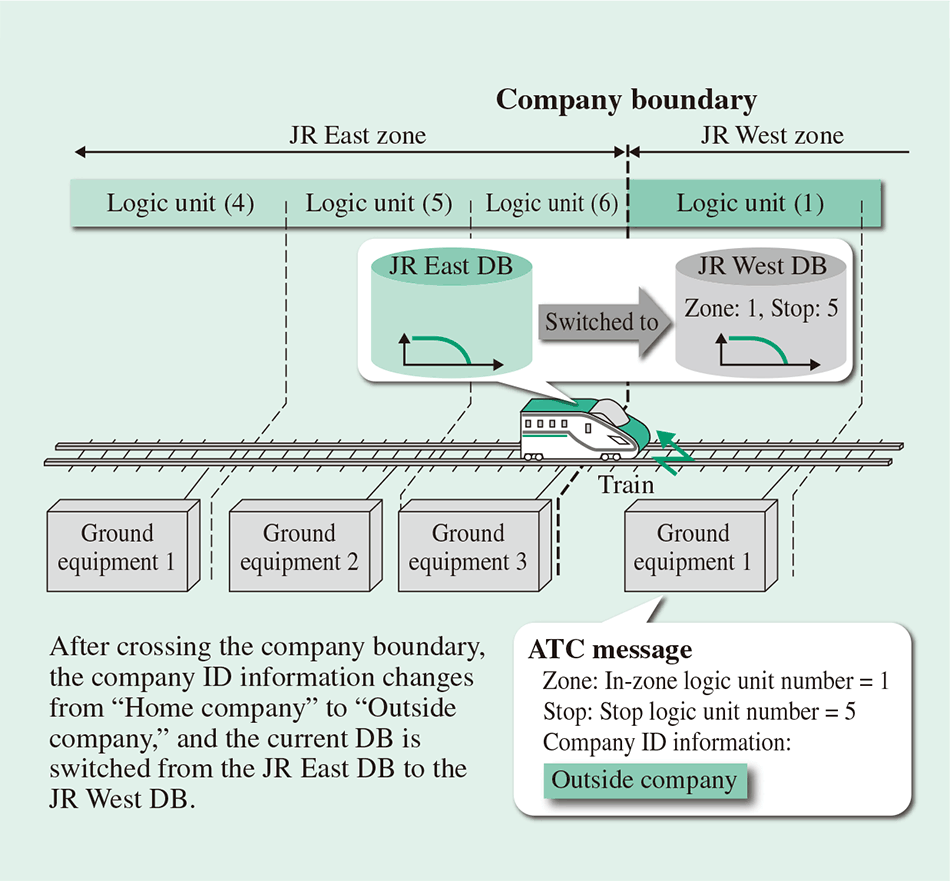 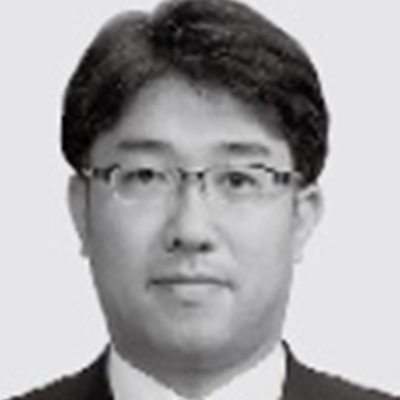 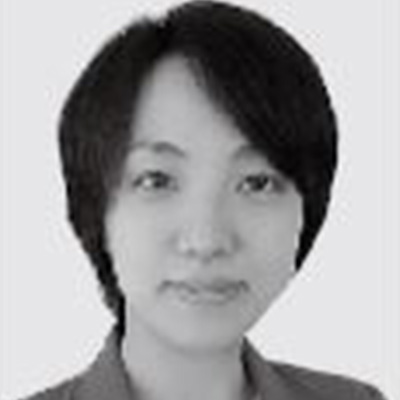 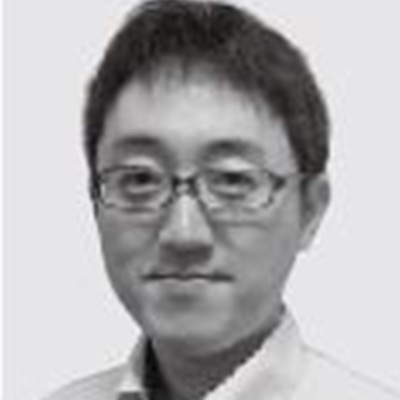 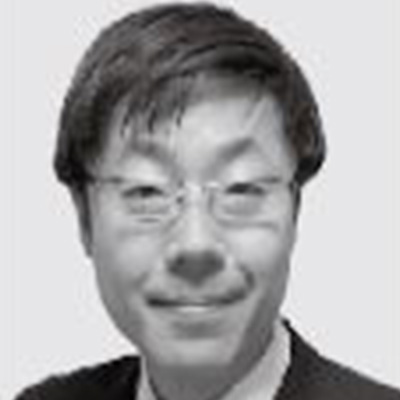 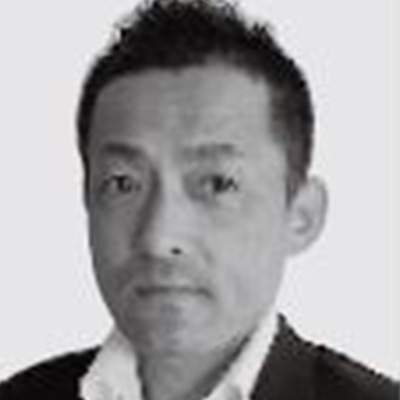 WE have completed new development that divides the onboard database (DB) used in the Shinkansen's Digital Communication & Control for Shinkansen-Automatic Train Control (DS-ATC) system into separate DBs that are managed independently by each train company. The aim of the development was to enable adaptation to new mutual through services provided by multiple Shinkansen train companies. These new services coincide with the opening of the Seibi Shinkansen lines (a set of five Shinkansen lines, one each in Hokkaido, Tohoku, and Hokuriku, and two in Kyushu). The providers of the new services are the East Japan Railway Company (JR East), the West Japan Railway Company (JR West), and the Hokkaido Railway Company (JR Hokkaido). The onboard DS-ATC system previously managed all lines using a single DB, but with the start of the new mutual through services, we decided to upgrade the system by dividing the DB mounted in the onboard DS-ATC equipment (hereafter, onboard equipment) into separate DBs managed independently by each train company. The upgrade was necessary because each railway operator needs to take responsibility for managing its own DB, since the DB contains important safety-related data. When switching from one DB to another at company boundaries, the operating conditions require that the switch is done while traveling between stations.

This article provides an overview of how we divided the onboard DS-ATC DB into separate DBs for independent management, and describes the process for controlling the switch between DBs at company boundaries.

OVERVIEW OF THE ONBOARD EQUIPMENT

Fig. 1—Configuration of DS-ATC Onboard Equipment. 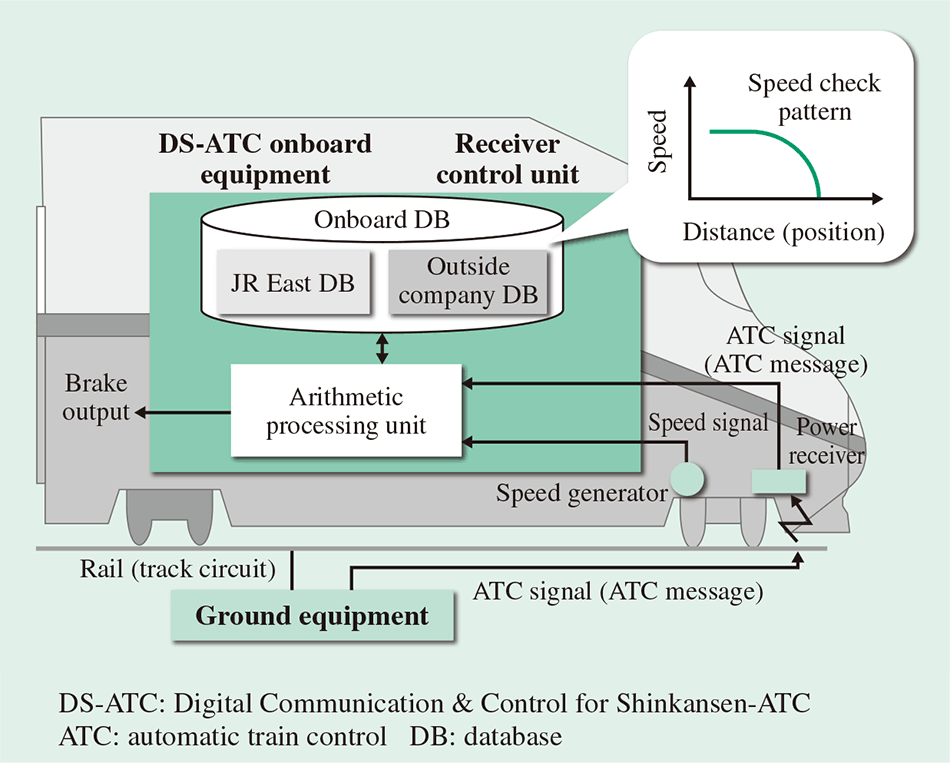 The receiver control unit forms the core of the onboard equipment. It contains the speed check patterns (DB) for all of the track circuits that could possibly become stop positions.

Speed check patterns for all of the track circuits that could possibly become stop positions are stored in the DB in advance. These speed check patterns account for factors such as the line's slopes and curves, speed limits when traveling through branch points, and the train's brake performance (see Fig. 1).

DEVELOPMENT OF ONBOARD DB SWITCHING FUNCTION

The aims of the development are shown below. 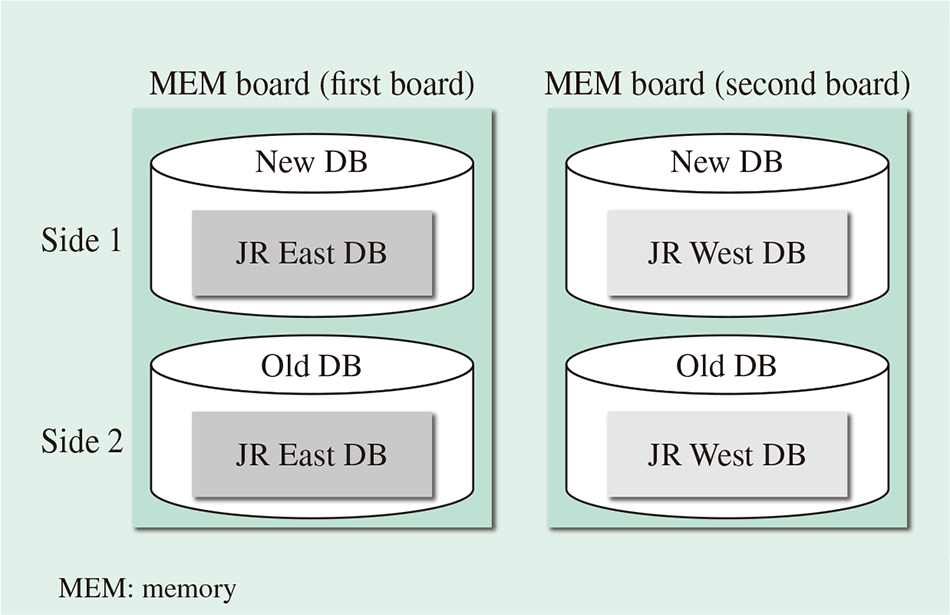 Both the JR East and JR West DBs were mounted. 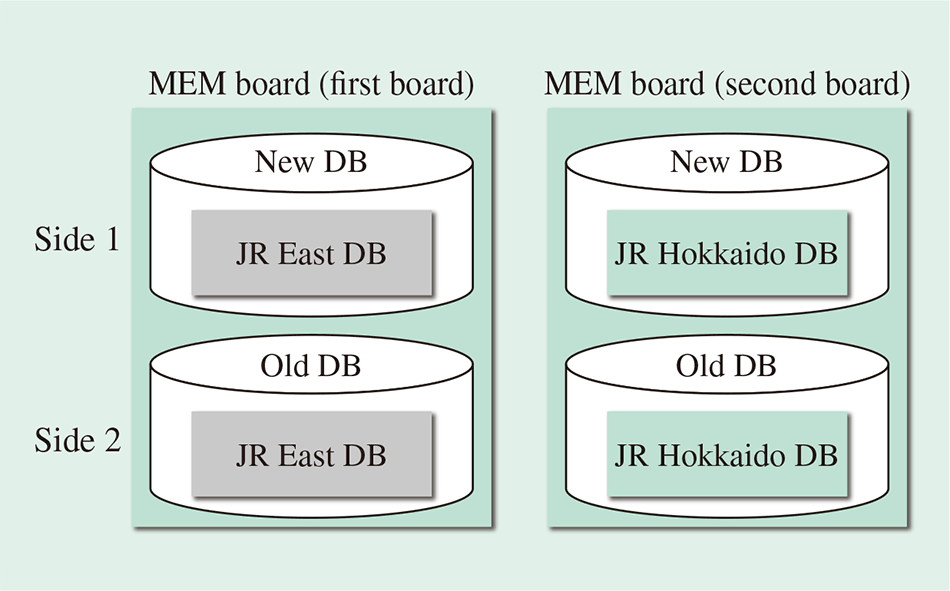 Both the JR East and JR Hokkaido DBs were mounted.

In the past, trains in the JR East jurisdiction were managed using a single DB, and the DB information for all of the Shinkansen rolling stock owned by JR East had to be modified when updating the DB. However, using this single-DB system after the start of mutual through services would have had a major impact. Updating the DB at a single location in the JR East jurisdiction would have required the DBs for all of the areas of other companies to be updated too, because the geographic version information (information used to link ground equipment and DBs) sent from ground equipment in ATC messages needs to be updated for all areas at the same time. To avoid this problem, we decided to divide the DB into separate DBs managed independently by each company, to prevent one company from affecting other companies when it updates its DB.

The new MEM boards were allocated to each company so that each onboard equipment system is equipped with two boards. The JR East DB was mounted on one board, and the JR West DB or JR Hokkaido DB was mounted on the other (see Fig. 2 and Fig. 3).

Adding company ID information has enabled multiple-operator service between companies, while keeping both ground equipment and onboard equipment modifications to a minimum.

Control Process for Switching Onboard DBs

An overview of the process used to control the switching of DBs at company boundaries is shown below. Through service from JR East to JR West is used as an example.

(1) When onboard equipment is started

(2) Before switching onboard DBs

When the train is in the JR East zone, the ATC messages it receives always contain “Home company” as the company ID information, and the onboard equipment continues to use the JR East DB (see Fig. 5).

(3) When switching onboard DBs

When the train enters the JR West zone (an outside company zone) from the JR East zone, an ATC message containing “Outside company” as the company ID information is received from the ground equipment. Since the company ID information has switched to “Outside company,” the onboard equipment switches the current onboard DB from the JR East DB to the JR West DB, and uses this DB to search for the speed check pattern that matches the in-zone logic unit number and stop logic unit number in the ATC message (see Fig. 6).

To prevent accidental DB switches at locations other than company boundaries, the DBs contain preregistered information specifying the track circuits at which switching DBs is permitted. This information enables the onboard equipment to accurately determine whether switching DBs is permitted on the current track circuit. The onboard equipment is designed to discard the ATC message (and not switch DBs) if the message contains different company ID information even though the train has not crossed a company boundary.

Fig. 4—Control Process when Onboard Equipment is Started. The speed check pattern matching the ATC message is retrieved from the DB and used for control. The pre-switch DB is used until just before a company boundary is crossed.

The current DB is switched to the other DB after an ATC message is received from the other side of the company boundary.

Since the area in the JR East jurisdiction was previously managed by a single DB, updating the geographic version in ATC messages for all areas at once required updates to the DBs of all Shinkansen rolling stock (including trains that did not provide multi-operator service to locations updated in the DB). The divided DB management approach we developed was used to divide the previous single jurisdiction into four zones (Northern Tohoku, Southern Tohoku, Joetsu, and Hokuriku), which enabled the switching of DBs at zone boundaries. Since the company ID information in ATC messages is set to “Home company” (JR East) in all areas in the JR East jurisdiction, enabling switching of DBs at zone boundaries required the geographic version information in ATC messages to be set individually by zone in the ground equipment instead of being set for all areas at once.

This change has eliminated the need to update the DBs of trains that do not provide multiple-operator service to locations updated in the DB when updating DBs in the JR East jurisdiction, which greatly reduces the DB update workload.

We mounted the developed product in a test train, and subjected it to testing on regular service routes. Since the test pre-dated service into outside company zones, it was done at the boundaries of the four zones into which the JR East region has been divided. A total of 48 DB switches were performed over 6 days at zone boundaries between Morioka station and Kitakami station on the Tohoku Shinkansen line. We obtained good results, confirming that the DB switching operations could be done as specified. Because the process of switching DBs at zone boundaries is equivalent to switching DBs at company boundaries, the results indicate that it will be possible to perform these operations normally at company boundaries also. The image shows a DB switch taking place as the train travels across a company boundary between the JR East and JR West zones. 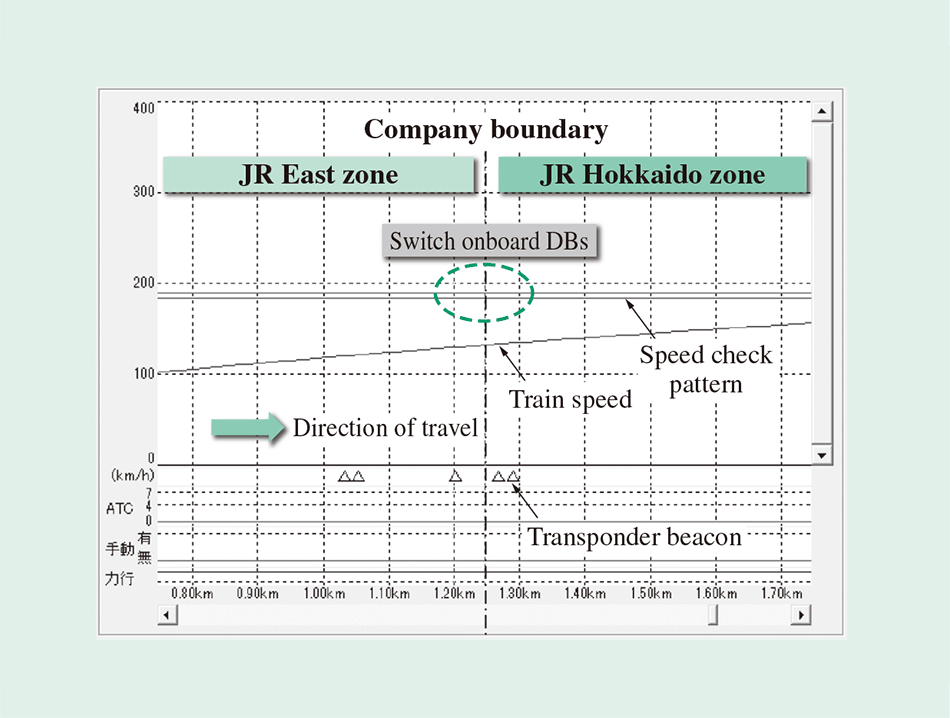 The image shows a DB switch taking place as the train travels across a company boundary between the JR East and JR Hokkaido zones.

The opening of the Kanazawa route on the Hokuriku Shinkansen line in March 2015 marked the start of through service from the JR East zone to the JR West zone, and the start of the DB switching control process we developed. Through service to the JR Hokkaido zone started in March 2016 with the opening of the Hokkaido Shinkansen line's route to Shin-Hakodate-Hokuto station, and operation has been successful to date (see Fig. 7 and Fig. 8).

To adapt to the new mutual through services provided by multiple Shinkansen train companies, we completed new development that divided the existing single DB into separate DBs managed independently by each company.

This work required overcoming challenges such as a shortage of memory capacity in the existing MEM boards, and the lack of ATC message information to differentiate between the home company and outside companies. Ultimately, we needed to construct both new hardware and a new system, including new MEM boards, and also a way of adding company ID information to ATC messages for both onboard and ground equipment. This work ensured that the DBs of outside companies are not affected when the home company DB is updated, and that the number of trains affected by DB updates is kept to a minimum.

It is also worth noting that we were able to implement the new functions while operating the system and limited changes in the existing DS-ATC system to only minor ones.