Identifying when and where railway congestion occurs is useful for both transportation operators and the passengers who use their services. By applying big data analysis to IoT data and conventional infrastructure system information provided to transportation operators, Hitachi wants to help improve transportation services by making it possible to visualize flows of people on scales ranging from single stations to citywide transportation networks. By creating synergy from the fusion of existing systems and people flow technologies, for example, by coordinating people flow technologies with passenger guidance assistance designed to ensure safety in station buildings, or with timetable optimization designed to eliminate congestion, Hitachi will continue to provide unprecedented new value, playing a part in social innovation. 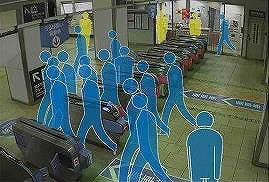 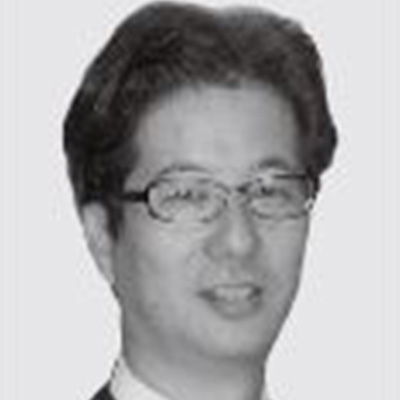 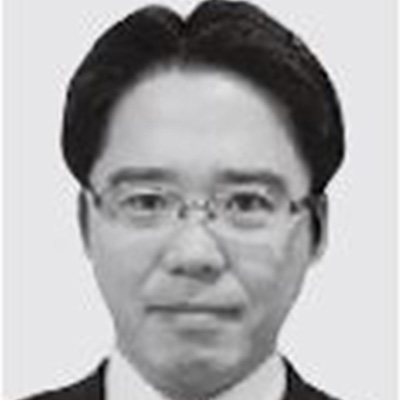 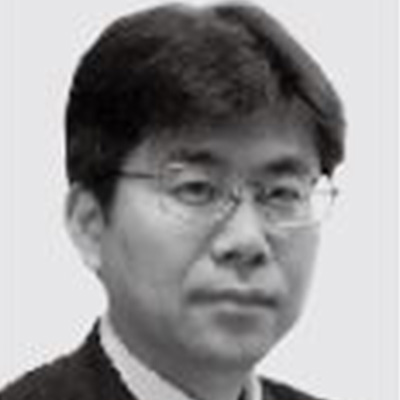 Customer Co-creation Project, Global Center for Social Innovation – Tokyo, Research & Development Group, Hitachi, Ltd. He is currently engaged in the collaborative creation of services and solutions with railway and urban customers. Mr. Nukaga is a member of the Japanese Society for Artificial Intelligence (JSAI), the Information Processing Society of Japan (IPSJ), the Institute of Electronics, Information and Communication Engineers (IEICE), and the Acoustical Society of Japan (ASJ). 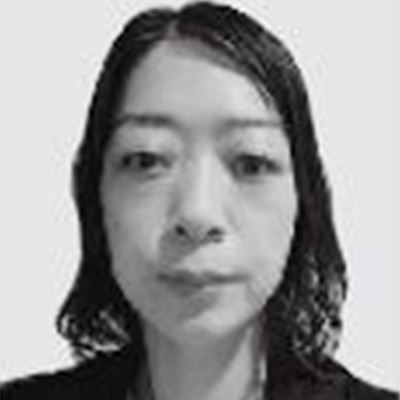 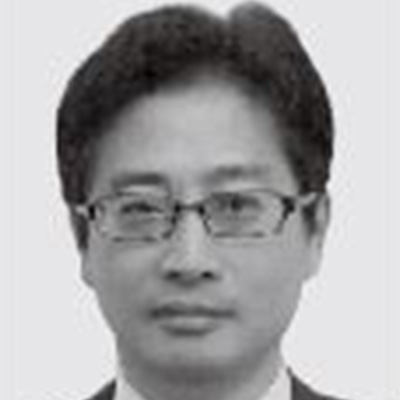 CONGESTION in trains and stations during rush hours and when incidents occur on lines is an unavoidable challenge for passengers when using railways. If a train is too crowded to board, sometimes if passengers wait for the next train they find it is less crowded. Incidents such as heavy snow that cause line delays or suspended service can result in highly congested stations where even the platforms are inaccessible. Railway operators have taken various measures to combat congestion, but it is not an easy problem to solve. Restricting access to a station and various other measures are needed to ensure passenger safety, particularly when congestion affects the scheduled service of trains or when a station is overcrowded.

To address these challenges, Hitachi has closely studied the flows of people that create congestion, looking for ways of attaining comfortable passenger movement and safe railway operation. Past studies of passenger flows have been conducted that relied on rules of thumb or field studies of human movements from visual data or the like. But the proficient use of recently developed Internet of Things (IoT) technology, big data analysis, and other advanced technologies has now made it possible to visually represent previously invisible flows of people in a quantitative manner.

The Hitachi Group has delivered a variety of public infrastructure systems for use in urban development and rail systems, with a track record that includes transport management systems and integrated circuit (IC) card management systems. At the same time, Hitachi is also highly familiar with the operational technology (OT) used to control these systems, and with OT data.

Moreover, providing information technology (IT) such as Lumada has also given Hitachi experience with information systems designed for use with big data and IoT technology.

People flow technologies are designed to contribute to railway operators and to urban development, and are one of Hitachi's social innovations that provide new value by bringing together its areas of expertise in IT and railway-related OT.

Hitachi's people flow technologies apply analysis, forecasting, and simulation techniques to train management system information, automatic ticket gate information, surveillance camera images, and other big data from existing railway infrastructure. By analyzing this data from a variety of perspectives, these technologies can visually represent states ranging from congestion levels in trains to flows of people walking in station buildings, contributing to the transportation industry and to society at large (see Fig. 1). 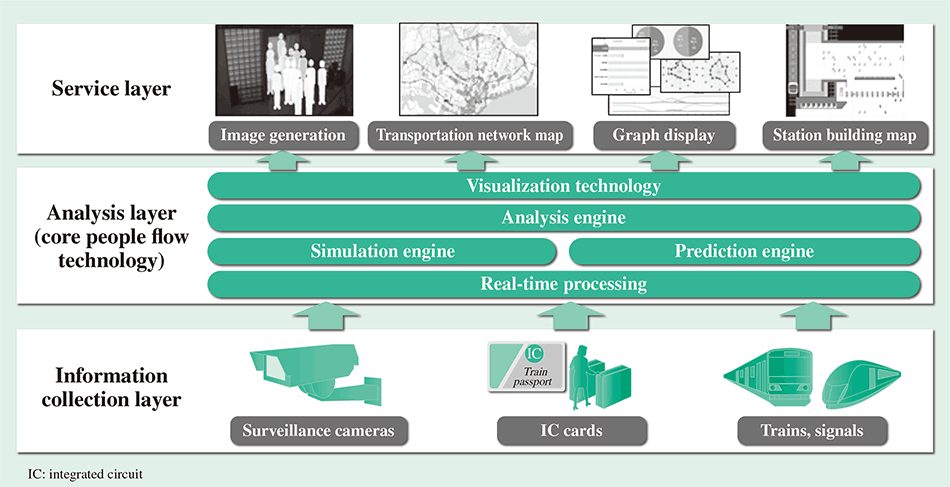 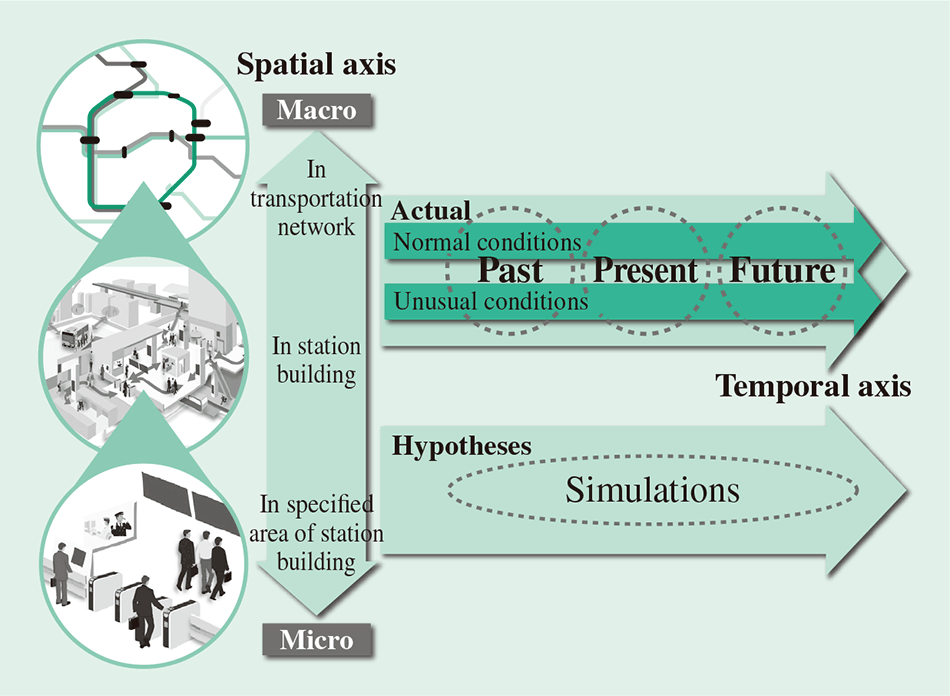 On the spatial axis, the scope is classified according to the scale of the area to be visually represented. It ranges from people flows in specified areas of station buildings, to people flows in entire station buildings, and to citywide transportation networks. On the temporal axis, the scope encompasses past, present, and future, and can include virtual simulations.

The perspective and scope of the information visually represented and provided by people flow technologies vary according to the data gathered and the end users that the information is intended for (see Fig. 2).

The scope covered is classified according to the size of the area to be analyzed and visually represented. On the spatial axis, the scope ranges from people flows in specified areas captured by surveillance cameras, to people flows in entire station buildings, or even on citywide transportation networks. On the temporal axis, separate technologies are used to visually represent the states of people flows in the past, present, and future, while simulations can be created based on virtual settings that impose various hypothetical “what if” scenarios. 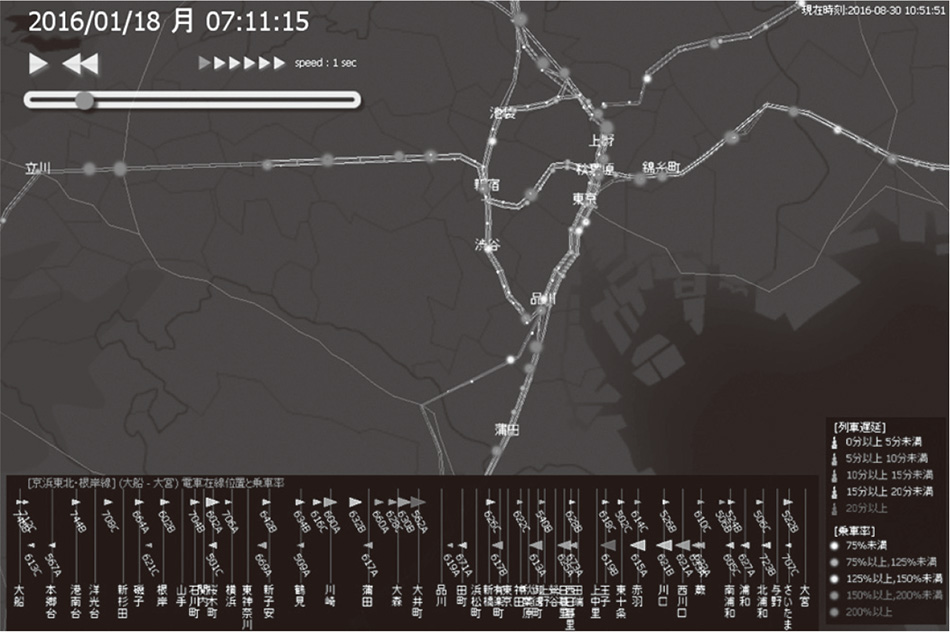 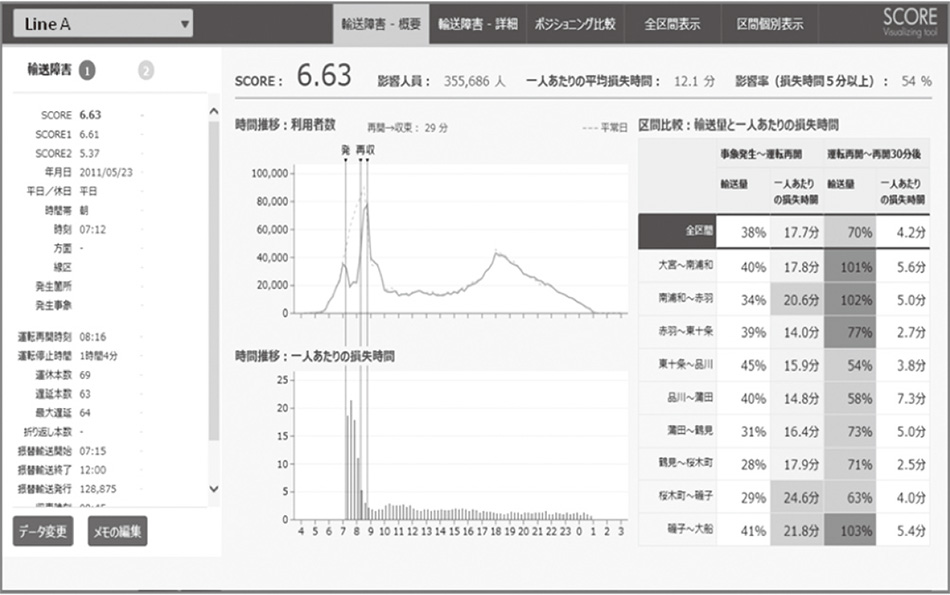 The system quantitatively expresses the effect of transportation problems on passengers.

These systems help improve the quality of transport services by aggregating and analyzing passenger movement data, and site data from trains and stations.

The system aggregates and combines train position information and passenger number information for conventional lines in the greater Tokyo area, and visually represents the results on a map.

By providing screens showing these maps to the dispatchers who control train services, the system helps them identify conditions during service disruptions, adjust train headway, and make other decisions for regulating rail services (see Fig. 3).

The system is designed to quantitatively assess the effects of transport problems on passengers by developing an index called SCORE that indicates the total amount of time lost by passengers.

SCORE analysis results are effective, not only for identifying the scale of transport problems, but also for providing feedback on the effects of service regulation measures such as shuttle services (see Fig. 4). 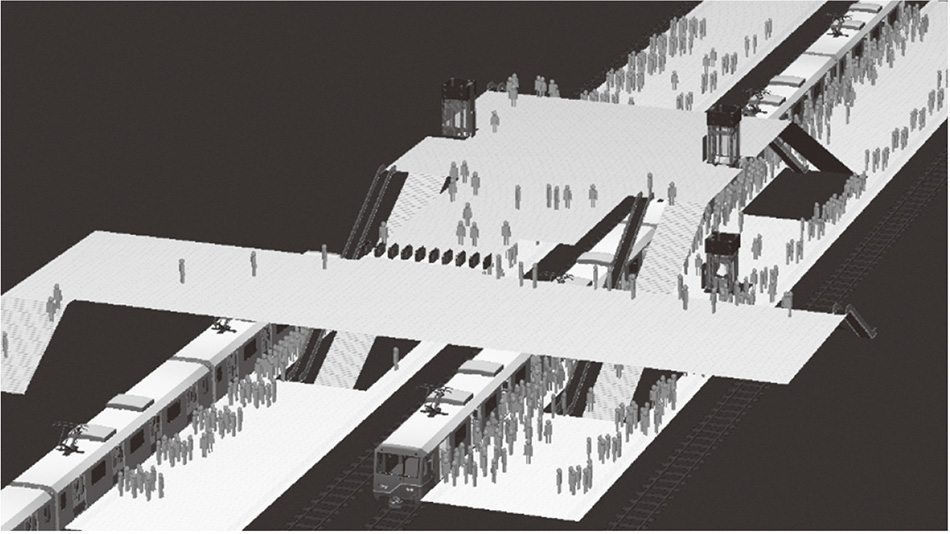 The system simulates congestion levels around ticket gates using links to information such as train arrivals.

The system provides an overview of passenger movements throughout the station building by simulating routes of passenger movement from the numbers of passengers passing through train doors and ticket gates obtained from sources such as railway system information and sensors. Based on this information, it is possible to create passenger guidance plans when planning new stations or renovating existing stations. The information can also be presented to station staff almost in real time to help them decide whether to impose access restrictions or similar measures when the station building is congested, and to assist in making decisions in areas such as station building facility control and station staff allocations. When used with predictive technology, it can predict congestion tens of minutes in advance, enabling staff allocation and proper responses before dangerous situations develop.

The service displays icons overlapping the positions of people in an image to provide intuitive station congestion information while respecting privacy.

A variety of sensors can be used to detect people flows, but if surveillance cameras installed as existing infrastructure can be used, then they are an attractive choice for railway operators because their initial investment is less. However, since the information in surveillance camera images can sometimes identify individuals, the issues of personal information protection and privacy must be solved before cameras can be used as sensors for people flow detection.

*
Eki-Shi-Vision is a registered trademark of the Tokyu Corporation.

A function that provides displays of station congestion information to users of Tokyu Dentetsu's mobile application made its official debut in October 2016. Tokyo Dentetsu plans to expand the function's coverage to all stations with the exception of a few lines.

Instead of displaying the raw camera images, Eki-Shi-Vision detects the positions and movement directions of people in the images, overlaps directional icons, and composites them onto the background image to intuitively show the level of congestion. The information delivered by this technology excludes all of the privacy-related elements of the people shown, such as features and identifying markers (see Fig. 6).

Eki-Shi-Vision lets users know their local station's congestion level from their smartphone at home, so is helpful on days when snow or other problems disrupt train service, or when high station congestion results in access restrictions. The application helps users decide how best to respond to adverse conditions, such as by changing their travel route or waiting at home. It also helps the railway operator reduce station congestion. 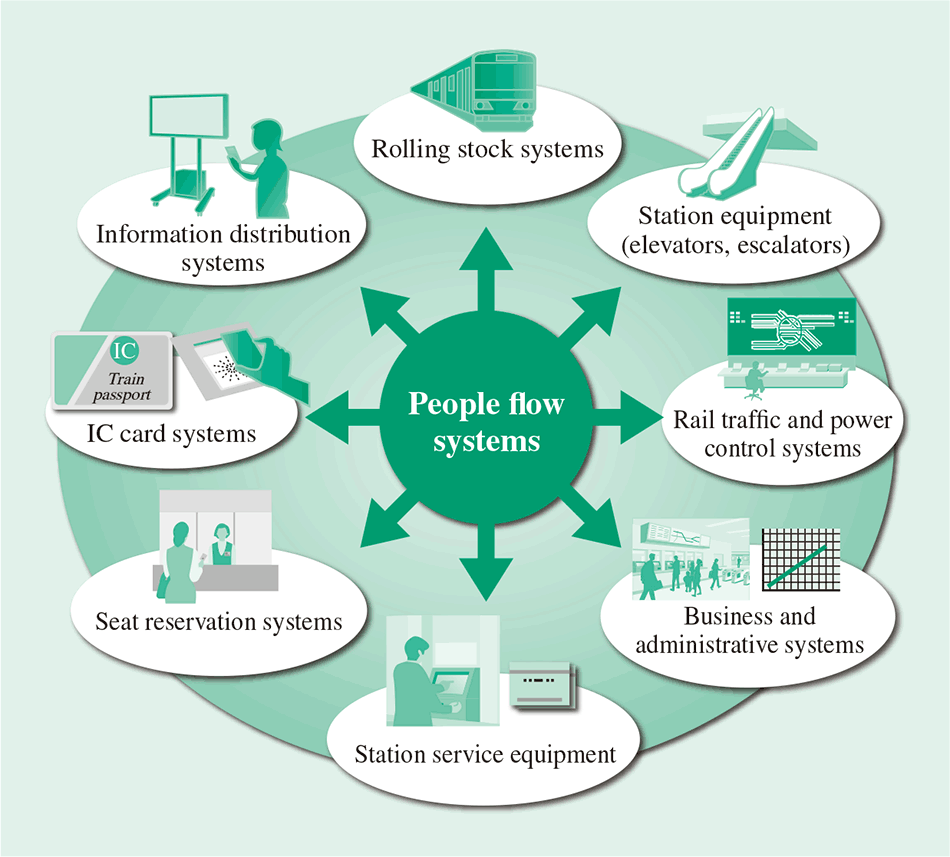 People flow systems will be coordinated and integrated with various existing systems to create synergy and provide new customer value.

People flow technologies are still undergoing development and will require improvements in analysis precision along with other upgrades and refinements in the future. Hitachi is aiming to coordinate the technologies with various existing systems, to boost added value and create new customer value through synergy.

By developing technologies that visually represent people flows in transportation networks, station buildings, and camera images, Hitachi has accumulated experience in developing people flow technologies up to now to suit a variety of needs and scopes of coverage. In the future, Hitachi plans to work on further integrating these separate technologies to provide users with customizable visual representations of people flows that are flexible in scale and scope.

Hitachi is also looking to draw on the strengths of the Hitachi Group by re-examining the properties of the data that can be gathered from the transport systems Hitachi has currently delivered, the new assessment indices that can be calculated from combinations of this data, and the new customer value that is created from these indices.

While the term people flow technologies is still not widely known, Hitachi envisions these technologies becoming vital platforms for various systems used by transportation operators, and in areas such as urban planning and public transport infrastructure. Hitachi plans to continue its work on developing these technologies in the years ahead.