THE movement of people in buildings is becoming more complex as buildings become taller and equipped with larger numbers of floors. This can result in congestion in the elevator lobby and make the elevators less punctual, thus exacerbating the problem of long waiting times for users.

This has led to strong demand from overseas markets for destination floor reservation systems in which more efficient elevator operation is achieved by having users specify their destination floor prior to entering the elevator. Orders for such systems are also increasing in Japan.

Hitachi is embarking on the second stage of implementing the core concept of Hitachi elevators by releasing a group control elevator in the Japanese market with a new destination floor reservation system* that proactively anticipates unconscious human behavior and aims to fulfill subconscious user expectations for “smooth movement” and “comfortable utilization.” This system is based on elevators already being marketed overseas that use group control together with the destination floor reservation system(1), and features additional enhancements to its algorithm and user interface for dealing with periods of heavy use (see Fig. 1).

This article describes the destination floor reservation system, which features improved performance during periods of heavy use and proactively anticipates unconscious human behavior in keeping with the core concept of Hitachi elevators.

*
Based on a study of actual operation, efficient group management control is achieved by taking account of the destination floors requested by users. The process can be compared to the biological phenomenon whereby bees collect honey efficiently by taking note of flower locations.

Issues to be Considered for Operation Control

One way to improve service performance during peak times (such as when workers arrive in the morning or go out for lunch) is to group passengers based on their destinations, thereby decreasing the number of times the elevator has to stop. In buildings with multiple tenants, for example, the different starting times of different workplaces means that user destination floors will change significantly depending on the time of day. Users, those traveling to high-demand floors and those traveling to other floors, typically get on the first available elevator that arrives at the lobby. Therefore users traveling to a particular floor are spread across different elevator cars. This results in the degradation of service performance because it requires all of these cars to stop at that floor (see Fig. 2). Fig. 3 shows an example of congestion during the morning rush at a multi-tenant building. As indicated in the figure, floor demand during peak times, such as when workers arrive in the morning, tends to follow a pattern. By using a learning function to identify this pattern, it is possible to shorten the round-trip time for elevator cars serving these high demand floors(2). 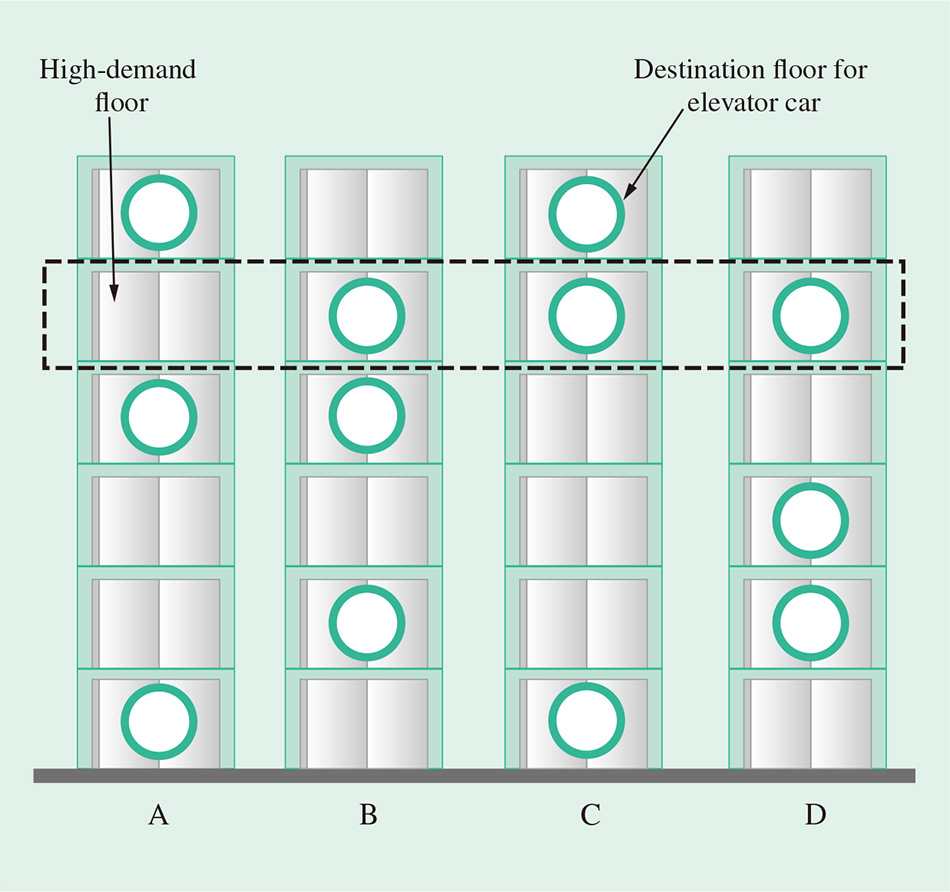 Poor service performance results when a large number of elevator cars stop at the same floor. 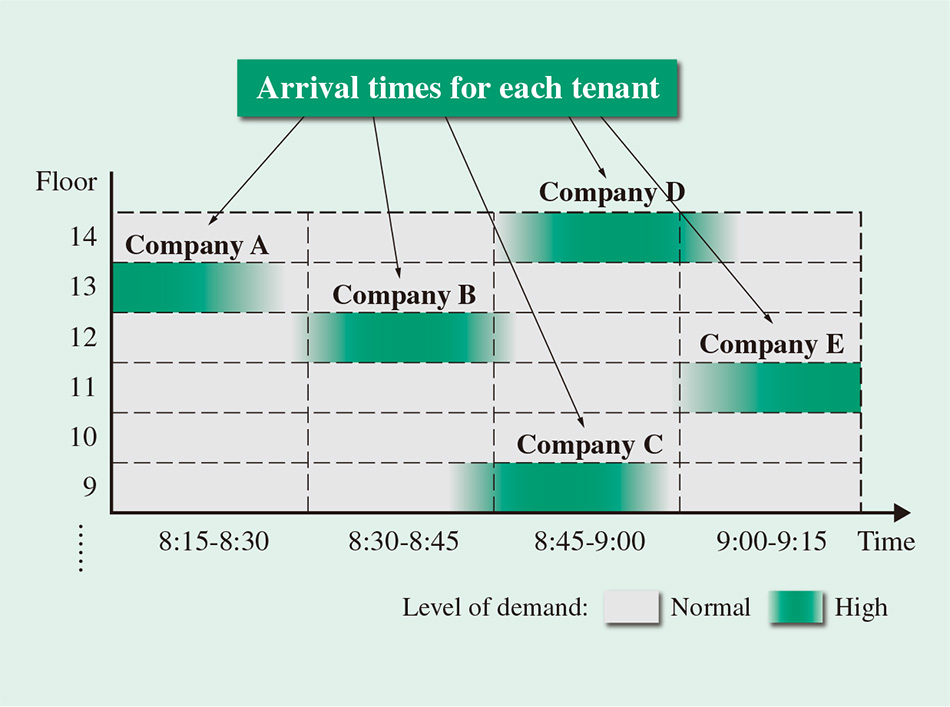 Different floors are in high demand at different times of the day.

Fig. 4 shows an overview of operation control. As shown in the figure, the learning function gathers and analyzes the elevator usage data, which changes from time to time, and classifies the data with similar features into to various human flow patterns. The system then matches the current real-time data with the most similar data that has been classified, and applies statistical analysis to generate predictions. These predictions indicate which floors will have high demand, and does so more quickly than using the realtime data on its own. Having identified these floors, the system then reduces the number of floors served by those elevator cars serving high-demand floors. This improves service performance, especially during peak times, because it results in shorter round-trip times for elevator cars that serve a small number of high-demand floors (see Fig. 4).

Fig. 4—How Service is Improved during Peak Times.

The system improves service performance because it results in shorter round-trip times for elevator cars. 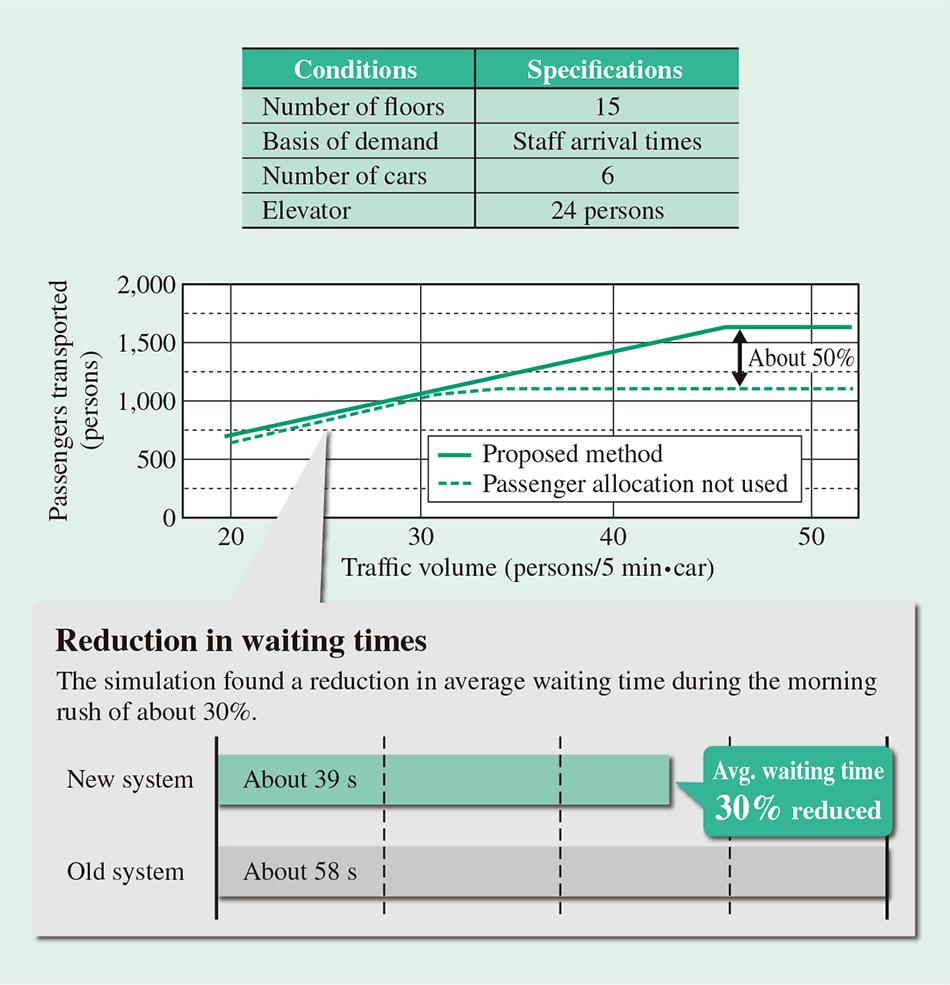 Congestion is reduced by assigning particular elevator cars to particular destination floors. The benefits in practice will vary depending on actual usage.

An evaluation based on a simulation of the movement of people during the morning rush was conducted to determine how much the new control method improves service during peak times (see Fig. 5). The horizontal axis in the graph represents the rate at which people are transported in each simulation and the vertical axis represents the total number of people transported. The results indicate an improvement of up to 50% in transportation capacity and a reduction of about 30% in waiting time when using the new method compared to the old method in which passenger allocation is not used. This demonstrates the benefit of taking floor demand into account in elevator control.

The system facilitates the smooth flow of people by having users specify their destination floors using a device provided for this purpose in the elevator lobby and immediately indicating to users which elevator car they should use. During those peak times when there is high demand for all floors (such as lunch time), route prediction is improved by making use of destination floor information in ways that draw on know-how from past experience, and with priority being given to the assignment of elevator cars to floors with high demand (long waiting times). In this way, the system can also deal with the complex flows of people that occur at peak times such as lunch time.

To prevent it from becoming a cause of congestion itself, the device used to specify the destination floor is designed to be simple and intuitive to use.

To facilitate installation so that more buildings can reap the benefits of shorter elevator waiting times, the device was made slim enough to fit in the space available. Similarly, to facilitate the wider adoption of group control elevators with destination reservation systems, it was also made large enough to accommodate the liquid crystal display (LCD) touch panel and the various sensors (which vary depending on the requirements), and adaptable enough to satisfy the varying needs of different countries.

Design for Ease of Use

Since this device is intended for a public space, it must be able to be used by a variety of people, including the elderly, children, and wheelchair users. Therefore, the design incorporated the following two characteristics (see Fig. 6).

Design for Simplicity of Operation

The following two measures were adopted for the screen to facilitate installation in buildings with different layouts and designs (see Fig. 7).

Hitachi offers two models for installation in elevator lobbies: (a) A wall-mounted model and (b) A standalone model (see Fig. 8). Both of these are available with two choices of screen: (c) A 10.6-inch LCD touch-panel display, and (d) A 5.7-inch LCD with separate keypad input. The choice of mounting and input type can be made based on the building layout and design.

Fig. 6—Design for Ease of Use. 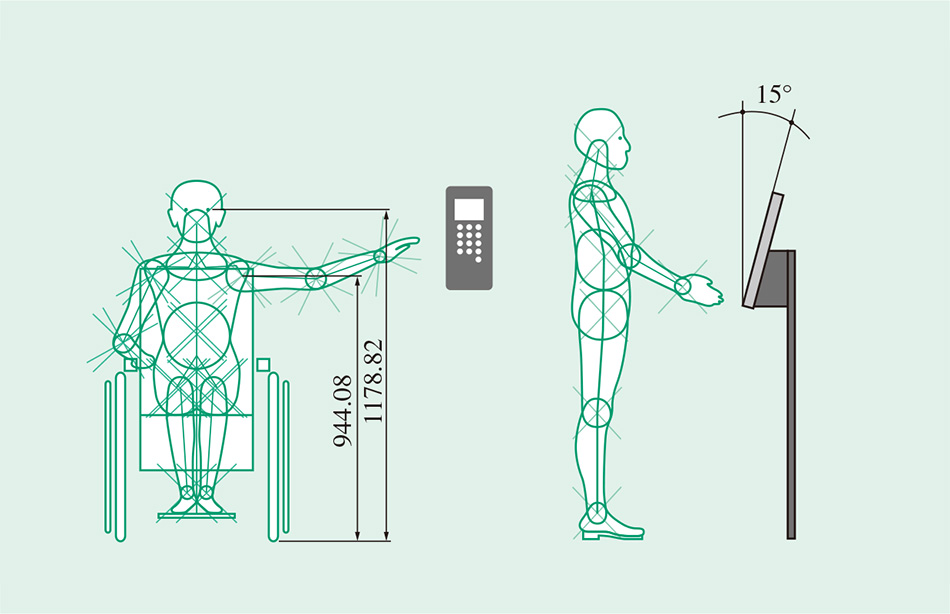 The height and angle were chosen to be suitable for all users.

Fig. 7—Design for Simplicity of Operation. 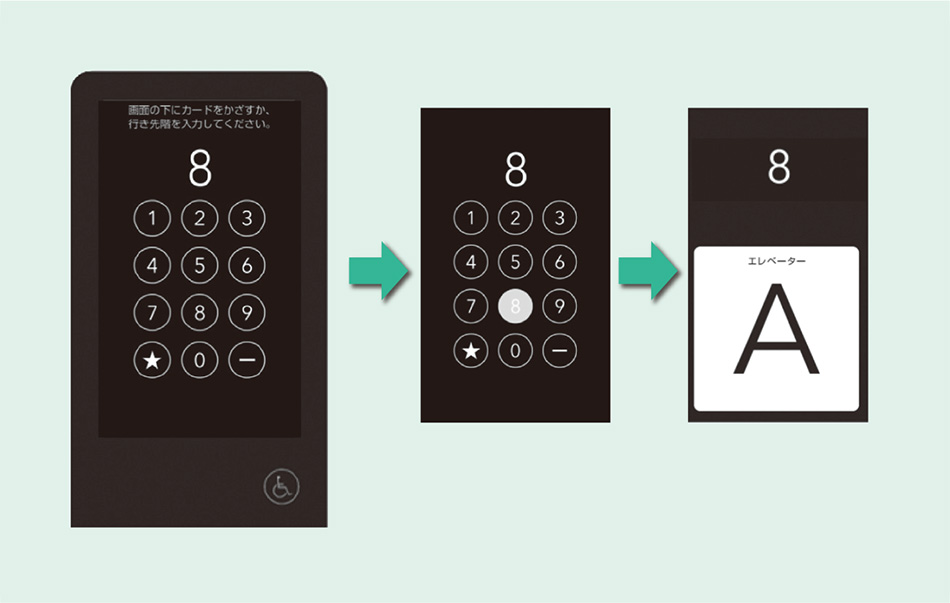 A simple design suitable for use by the public was adopted that combines universality and ease-of-understanding. 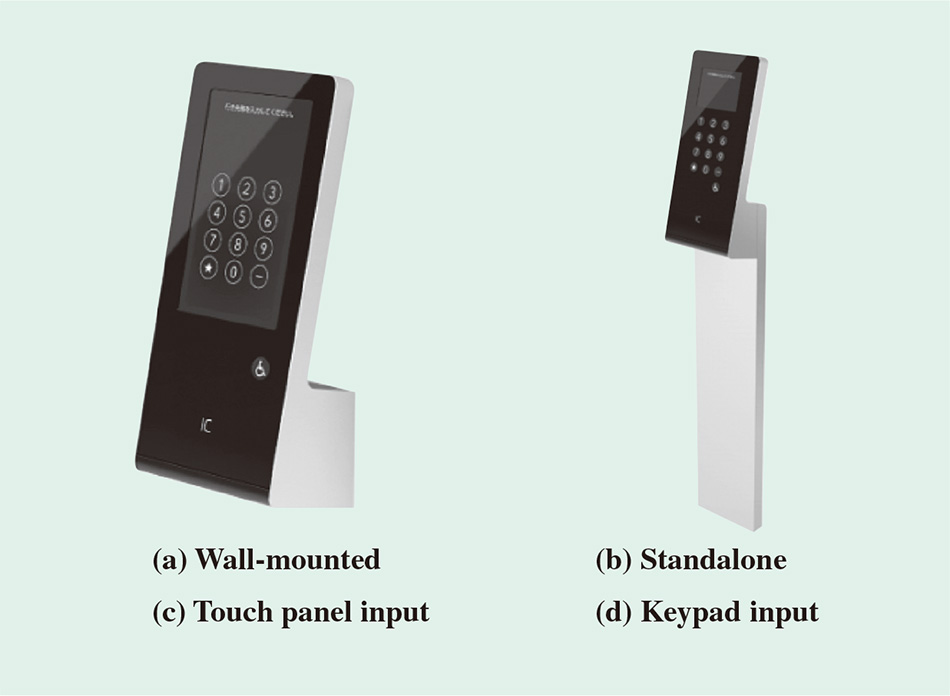 A choice of designs and input methods is available to suit the requirements of the building.

This article has described the algorithm used to reduce congestion during peak times and the improved user interface of Hitachi's group control elevators that feature a destination floor reservation system.

The system, which was recently commercialized, achieves high capacity by combining Hitachi's predictive destination route control with a device designed for ease-of-use and simplicity through which users specify their destination floor. Group control elevators equipped with these features reduce waiting times during peak periods and facilitate the free flow of people.

In the future, Hitachi intends to continue developing techniques for elevator operation management that consider both the vertical and horizontal movements of people through buildings, and to supply group control elevators with destination floor reservation systems that enable building users to routinely move around freely and comfortably.