Responding to Widespread Disasters in Japan

Responding to Widespread Disasters in Japan

The vertical mobility infrastructure provided by elevators plays such a crucial role in modern urban life that a widespread interruption of elevator service may significantly impact the normal functioning of a modern city. More efficient systematic support and recovery work is needed to respond to the extensive number of simultaneous elevator shutdowns caused by major earthquakes and other widespread disasters. Drawing on its experience as an elevator manufacturer, Hitachi has created measures designed to minimize equipment damage, to prevent accidents such as trapped users, and to ensure safe and comfortable elevator service in the event of an earthquake. Hitachi is also working on improving response systems to enable rapid recovery efforts if by any chance elevators shut down. 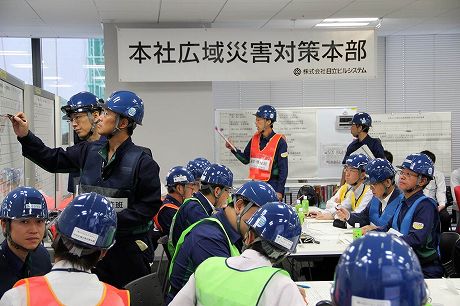 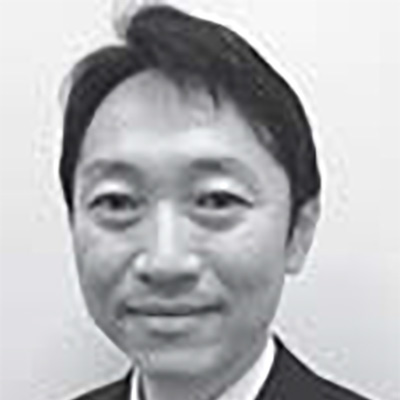 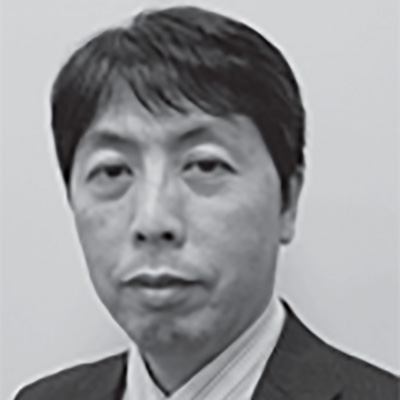 A business continuity plan (BCP) is an action plan created to enable a company, government agency, or other organization to continue its mission-critical business and promptly resume other business in the event of a large-scale disaster or accident. BCPs can minimize damage and the impact on service users by specifying the priority level of each operation beforehand, and setting forth response measures such as providing backup systems and allocating recovery workers.

To prepare for widespread disasters and emergencies such as major earthquakes and widespread power failures, Hitachi, Ltd.'s Building Systems Business Unit is working on improving both the tangible and intangible aspects of BCPs to enable rapid response. It is creating preventive measures designed to minimize damage, and instituting response systems and emergency action plans for use when damage is sustained. This article looks at the elevator-related work being done in this area, and how BCPs are also being improved for other building facilities.

In July 2005, an earthquake struck northwestern Chiba prefecture and strong tremors peaking at a seismic intensity level 5-upper on the Japan Meteorological Agency (JMA) scale were observed in and around Tokyo. About 64,000 Hitachi and competitor elevators were disabled for an extended period by earthquake emergency operation, resulting in 78 incidents of trapped users (some for considerable lengths of time)(1). The earthquake made elevators a focus of attention, underscoring their importance as vertical mobility infrastructure.

Establishment of a Widespread Disaster Prevention Office (Open Since 2008)

In 2006, the promotion of elevator earthquake readiness measures became the subject of a national government report/proposal and new legislation. Around the same time, the Tokyo Metropolitan Government designated the Japan Elevator Association (Kanto branch) as a Designated Local Public Corporation under the Disaster Countermeasures Basic Act. This increased level of elevator industry corporate social responsibility led Hitachi to see a need for ongoing and organization-driven work on elevator disaster readiness. Hitachi responded by creating the Widespread Disaster Prevention Office in 2008 to provide a dedicated organization for disaster readiness instead of the project-based approach used previously.

The photo shows Hitachi employees wearing vests labeled with their roles as they take part in training that simulates actual disaster conditions.

Every year throughout Japan, Hitachi provides periodic training designed to verify the effectiveness of rapid recovery and response systems for elevators and other building facilities in the event of a widespread disaster (see Fig. 1).

The primary areas covered by the training are: 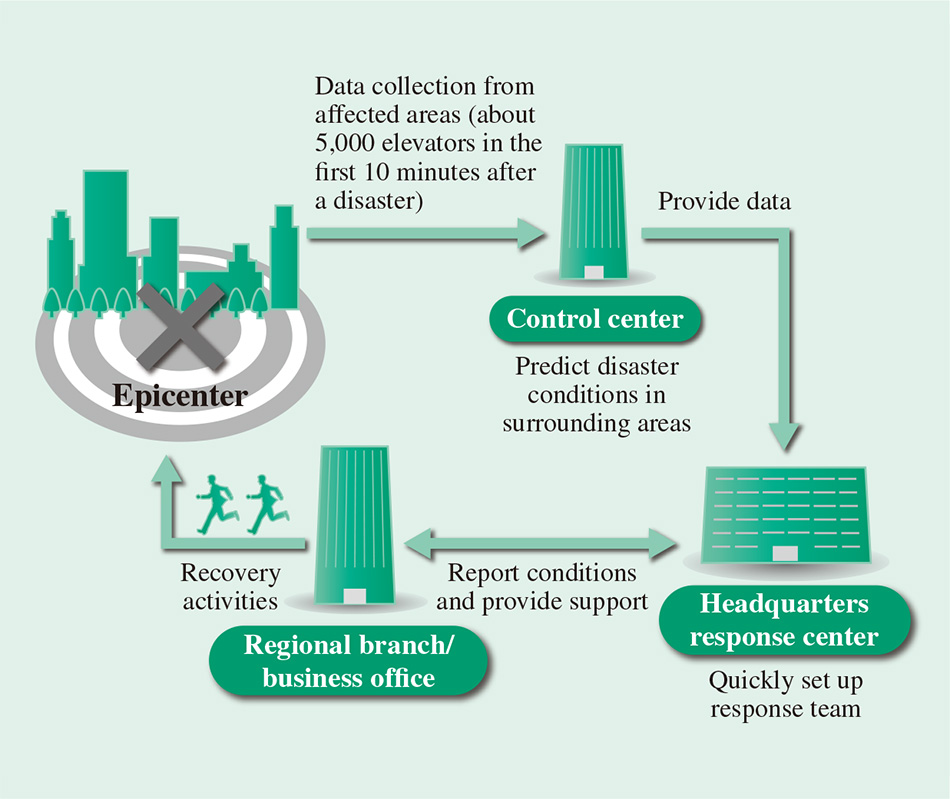 This system enables sharing of damage and recovery information among the control centers, headquarters response center, and regional branches and business offices.

To respond better to disasters, Hitachi has created a system that uses its in-house information network to centrally manage information such as staff allocation instructions and recovery conditions during the period between disaster occurrence and recovery completion (see Fig. 2)(2).

1. Identification of damage conditions
Using information such as data sent from elevators to control centers, Hitachi's widespread disaster recovery support system can identify information for individual buildings such as elevator service statuses or the existence of trapped users. In the first ten minutes after a disaster occurs, the system automatically identifies the statuses of about 5,000 elevators, rapidly pinpointing elevators that have shut down and enabling them to be prioritized for recovery measures from hospitals or public facilities.
2. Prediction of the scale of damage
Using elevator shutdown data from immediately after an earthquake, the system uses a proprietary analytical method to automatically predict the scale of the damage to each affected area. The prediction information is distributed by email to enable proper allocation of specialist technicians during the initial response phase, and other steps needed to quickly assemble a response team.

1. Expansion of means of communication
Hitachi has made efforts to expand the available means of communication by adopting technology such as MCA radio equipment* that is not subject to communications regulations during disasters, phones given priority during disasters, and satellite mobile phones.
2. Safety checks of all employees
A safety check system sends employees at least three training emails per year and checks the responses.
3. Disaster response action cards
All employees carry disaster response action cards that provide guidelines for how to act during a disaster, and specify each employee's role.
4. Other measures

Hitachi has two control centers (one in eastern Japan and one in western Japan) that perform functions such as remotely monitoring and controlling elevators and other building facilities nationwide, distributing information to business locations, and identifying maintenance situations. In the event of a widespread disaster, the centers have a backup system that enables the functions of the affected center to be rapidly taken over by the other center.

Establishment of Business Continuity System for Disasters in the Tokyo Area

Hitachi has created a support system that can draw on any of its 350 nationwide service networks as required by the disaster conditions. In the event of a disaster in the Tokyo area, recovery support is provided rapidly by unaffected branches (see Fig. 3).

On September 1, 2016 (Disaster Prevention Day in Japan), widespread disaster recovery response training was held simultaneously throughout Hitachi to simulate the conditions of an earthquake that has occurred directly under Tokyo that prevents a response center from being created at the company headquarters (in Tokyo's Chiyoda ward). The training verified the company's response when creating an alternative response center at the Kansai Branch (in Osaka's Kita ward).

Fig. 3—Support System during a Disaster in the Tokyo Area.

Support personnel are recruited from three locations (Omiya, Kashiwa, and Tachikawa) and dispatched to each business office in the Tokyo area.

The Mito Works (in Ibaraki prefecture) is an elevator production location that was damaged by the Great East Japan Earthquake of March 2011, and was forced to temporarily halt production. The list of items requiring responses was diverse, including damage to critical infrastructure, damage to buildings and production facilities, disruption of transportation routes, and affected suppliers.

To enable rapid resumption of production activities, Hitachi responded by reviewing the procedures for restoring disaster-struck buildings and other initial response areas in the BCP, while systematically working on improving building earthquake resistance and expanding facilities. Hitachi also created a production system designed to restore production activities as quickly as possible and to support the secured site through activities such as creating a system for contacting and assisting suppliers, and studying alternative transportation routes.

Changes in Earthquake Resistance Standards Due to Past Earthquakes

These standards were soon accompanied by a new design and installation guide for elevators created as standards in 1981. These guidelines covered areas such as the five items shown in Fig. 4 (see “1981 guidelines”). Requirements included maintaining functionality after earthquakes of intensity level 5-lower, and installing earthquake control operation devices.

The 1995 Great Hanshin-Awaji Earthquake resulted in many cases of elevator damage from fallen weight blocks, toppled or broken devices and snagged ropes, so earthquake resistance improvements targeting these issues were added in 1998 (see “1998 guidelines” in Fig. 4). In response to the 2005 Northwestern Chiba earthquake, the Council for Infrastructure Development created guidelines in 2009 promoting earthquake readiness measures. The guidelines called for installation of equipment such as devices for earthquake control operation (such as P-wave control operation), and specified methods for rescuing trapped elevator users and reducing user disruption after earthquakes (see “2009 guidelines” in Fig. 4). The Tohoku Earthquake of March 11, 2011 (the Great East Japan Earthquake) was the largest earthquake ever recorded in the Japanese archipelago. It had a JMA intensity level of 7 (magnitude 9.0), and resulted in 15,889 deaths and 2,598 missing persons. There were 8,921 damaged elevators (2.43% of the total) and 1,598 damaged escalators (3.9%) over a widespread area, but the damage to equipment conforming to the 2009 guidelines was relatively light (1.13% for elevators and 2.0% for escalators)(3). The earthquake resulted in the review of laws affecting the safeguarding of human life and led to amended guidelines in 2014 (see “2014 guidelines” in Fig. 4)(4).

Fig. 4—Changes in Earthquake Resistance Standards Due to Past Earthquakes. 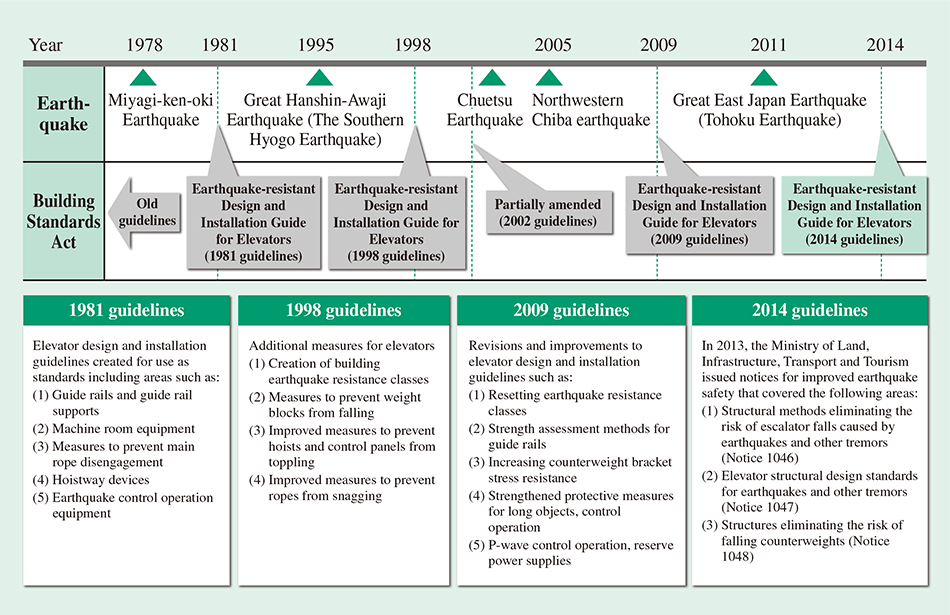 Earthquake resistance standards are reviewed after every major earthquake.

Long-period seismic ground motion is a slow type of vibration that travels long distances without attenuation, and is undetectable by conventional P-wave (preliminary tremor) and S-wave (principal shock) earthquake detectors when acceleration is low. 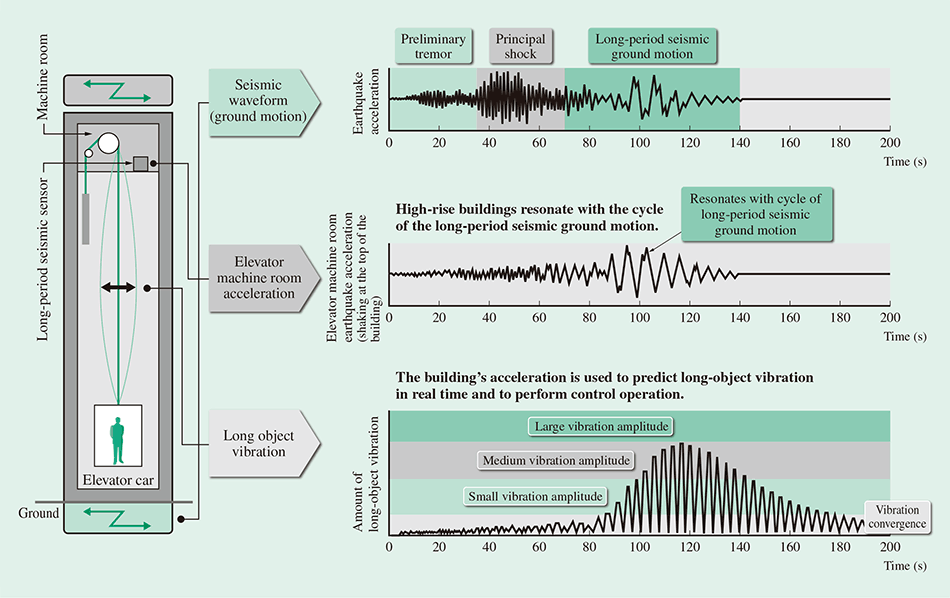 If resonation causes the elevator rope to shake, the elevator is stopped at a safe floor to prevent equipment failure caused by snagged ropes when service is resumed.

The figure shows how automatic landing devices are triggered when no power is supplied by the building’s generator, which prevents users from being trapped in elevators during power failures. 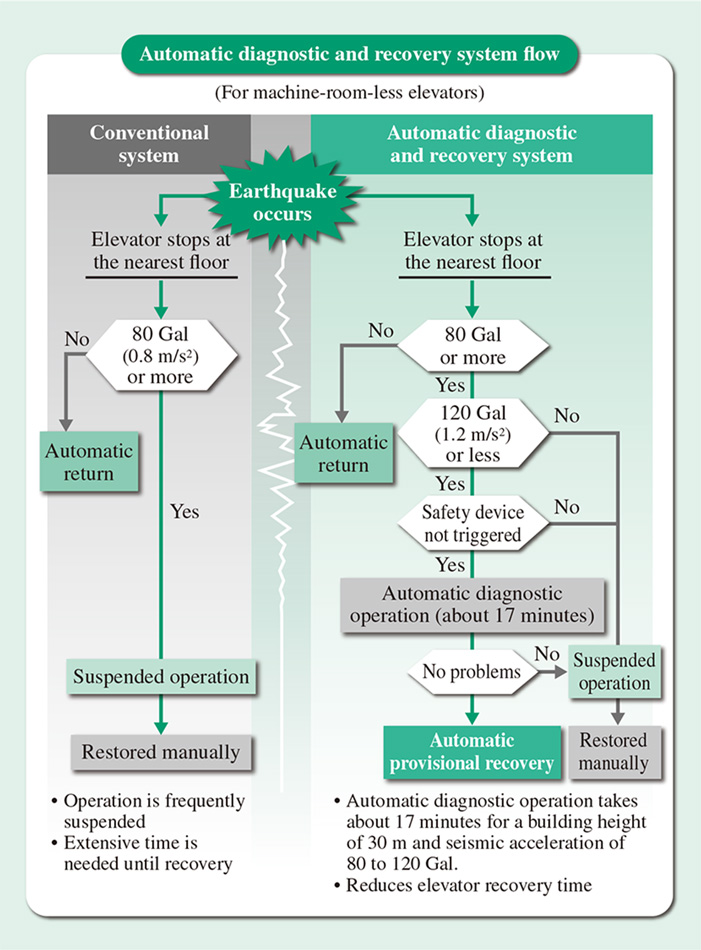 The flowchart shows how Hitachi’s automatic diagnostic and recovery system operates in comparison to a conventional system. The system prevents extended suspension of elevator operation by automatically putting suspended elevators into a diagnostic operation mode to provisionally restore them without waiting for inspection by a maintenance engineer.

At 9:26 pm on April 14, 2016, an earthquake with a peak intensity level of 7 struck Kumamoto prefecture, shutting down about 15,000 Hitachi and competitor elevators, and damaging over 1,000 of them. Thirty minutes later, Hitachi had set up disaster response centers at the company headquarters and a Kyushu Branch, and had started collecting information and assisting affected areas. The entire company came together as one Hitachi to provide assistance for about a month starting from the early morning of the following day, as a way of improving its disaster relief capabilities. The relief work included dispatching over 400 staff members from unaffected areas. The ability to provide this kind of support was made possible by the earthquake response activities of Hitachi's elevator and escalator business presented in this article, and was a result of the tireless, round-the-clock, single-minded dedication of each employee to the relief activities.

To enable reliable responses to disasters that can strike unexpectedly and under widely varying conditions, Hitachi will continue working on innovating technology (and improving quality) to further improve safety and security, and continue holding periodic training to promote disaster awareness and readiness.