Hitachi has released a series of “vacuum compartment” large capacity refrigerators that can preserve the taste of food in the chilled compartment, the vegetable compartment, and the freezer compartment through the use of three unique technologies to keep food fresh*. The main features are as follows.

1. Vacuum-chilled compartment
The chilled compartment maintains the temperature at approx. -1°C, keeping meat and fish from freezing. Furthermore, the vacuum structure of the compartment reduces oxygen, suppressing oxidation, and the use of a new platinum catalyst, which increases the generation of carbon dioxide, inhibits enzyme activity on the surface of food, thus preserving the taste of food.
2. Vegetable compartment
By adopting a new platinum catalyst, the vegetable compartment uses the effect of carbon dioxide to store vegetables in a sleep-like state. The compartment also keeps moisture in, helping to prevent drying, thus ensuring vegetables retain their freshness and nutrients.
3. Quick-freezing aluminum tray
The spacious, thin case at the top layer of the bottom of the freezer compartment uses a new quick-freezing function to maintain the taste of meat and fish and the nutrients of vegetables. The case is fitted with a large aluminum tray to create ample space to store food without stacking and it is also equipped with temperature sensor that detects when warm food is stored, enabling the food to be frozen quickly.

*
Effectiveness varies depending on operating conditions and the type, state and volume of the food stored. 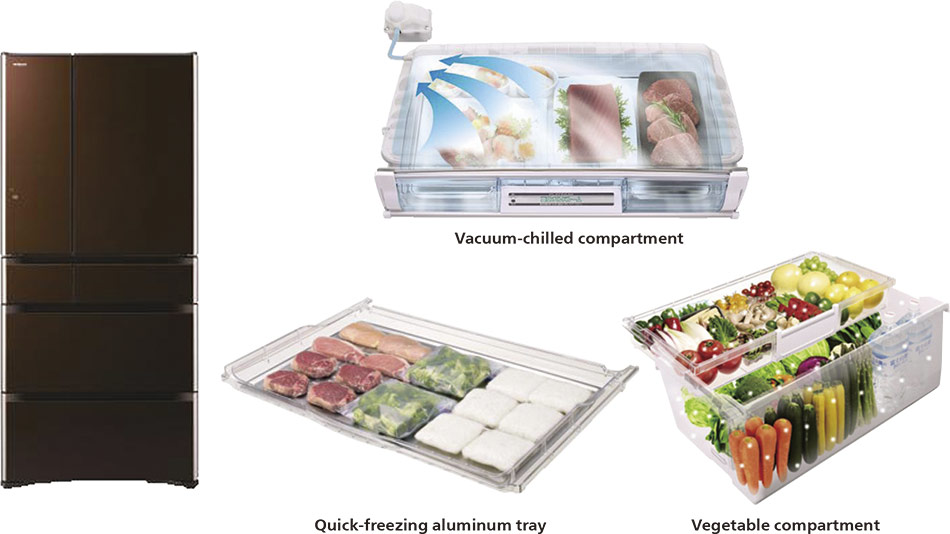 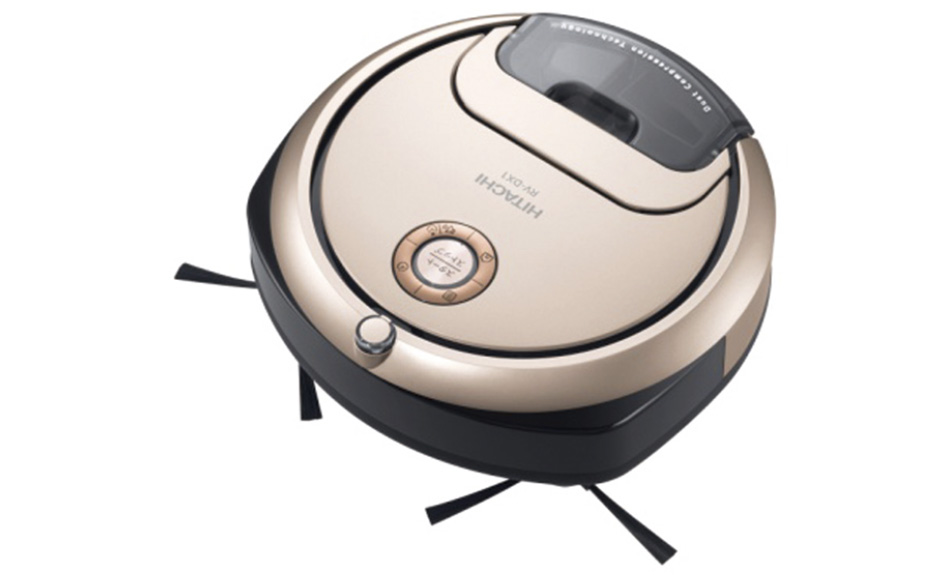 Hitachi has released the robot cleaner RV-DX1 which, with a small body, can clean hard-to-reach areas around the home such as tight gaps and underneath low furniture. The main features are as follows. 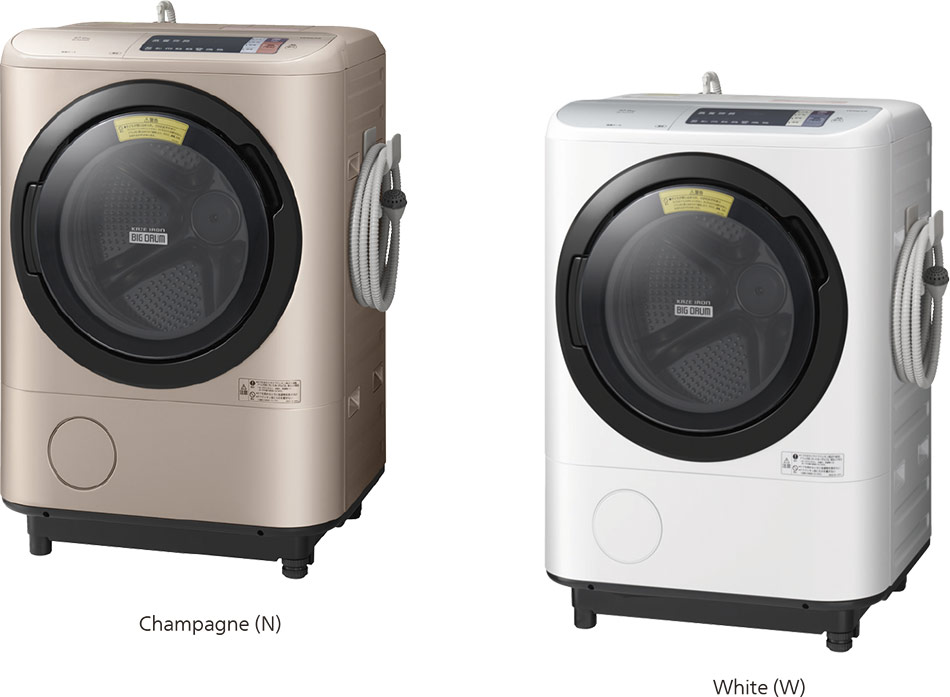 *1
Among front loading washer-dryer machines for domestic use available in Japan as of December 2016 according to the study undertaken by Hitachi Appliances, Inc.
*2
Wind speed next to the air outlet, calculated from the area of the air outlet and the airflow. 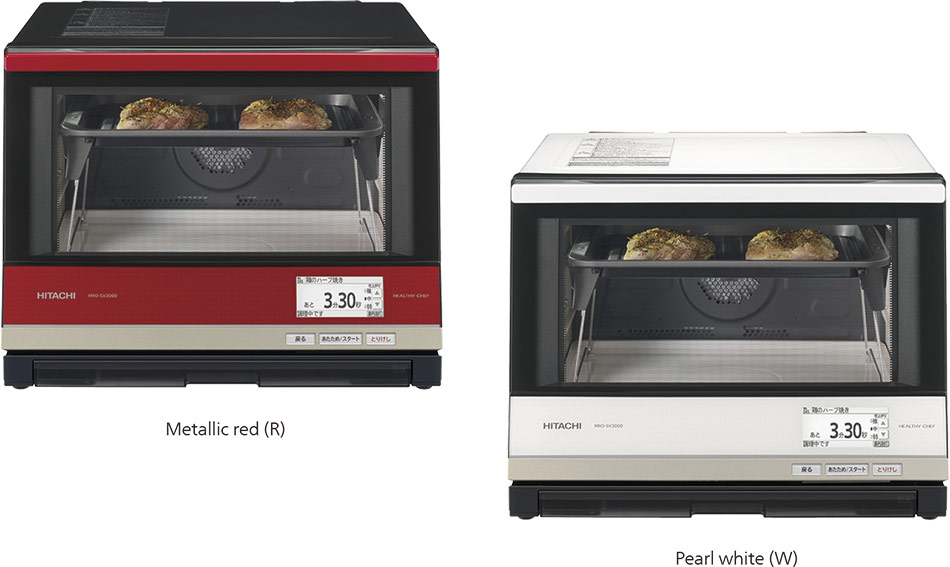 Hitachi has released the health conscious superheated steam oven MRO-SV3000, equipped with Hitachi’s unique double scanning system*1 that measures both the food temperature and weight (including the dish). It also features an automatic cooking program function for bringing out the taste of meat and fish*2. The product also has an automatic cooking function for retaining vitamin C*3, which is easily destroyed by heat and because of this function, the machine can evenly thaw*4 frozen food such as minced meat, thinly sliced meat and sashimi, and can also heat food such as rice or noodle to the optimum temperature*5 with or without plastic wrap.

In addition, automatic cooking function of the MRO-SV3000 also covers a wide range of recipes, including local dishes from all over Japan.

The bright interior is lit with light-emitting diode (LED) and has a bright-colored silicon coating to make it easier to see food simmering or browning during cooking and to facilitate cleaning by making it easier to see and remove any grime.

*1
Three weight sensors and center infrared scanner.
*2
29 automatic cooking recipes with high inosinic acid and glutamic acid levels. When compared to meat and fish cooked using the heating control technology featured in the MRO-RY300 released in FY2015 and earlier models, and when compared based on the amount of flavor components of meat and fish cooked without using seasoning according to the study undertaken by Hitachi Appliances, Inc. Effective­ness varies depending on the ingredients used and other conditions. Taste perception also differs depending on factors such as seasoning, temperature, and preferences.
*3
Compared to MRO-RY3000 released in FY2015 according to the study undertaken by Hitachi Appliances, Inc. 13 automatic cooking recipes. Loss of vitamin C varies depending on the conditions and the type of vegetables.
*4
Cooking results may vary depending on the factors such as the shape of the food, interior temperature, and dish.
*5
The average temperature of the food at the end of the cooking time specified for each automatic cooking recipe. This may differ from the temperature setting, depending on the drink or food being heated up. 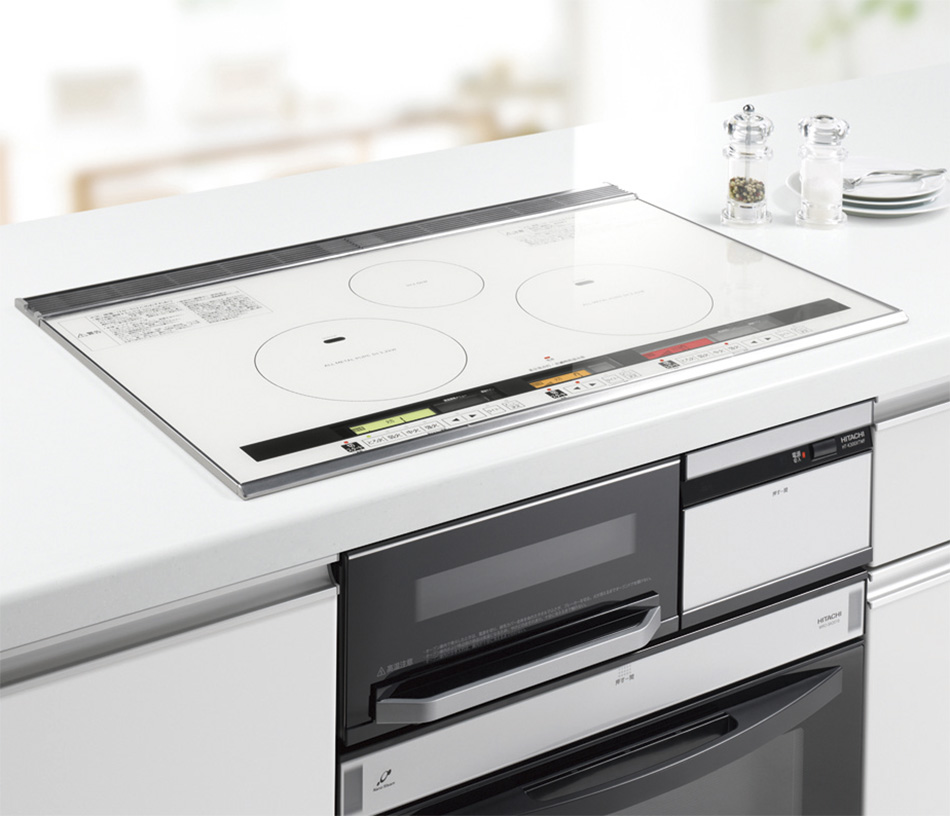 Hitachi has released the three-zone induction hob HT-K300XTWF (W) that comes with two special dishes, namely, a ridged-surface grill dish and a flat-surface oven dish *1 to make it easy to cook a variety of delicious dishes. 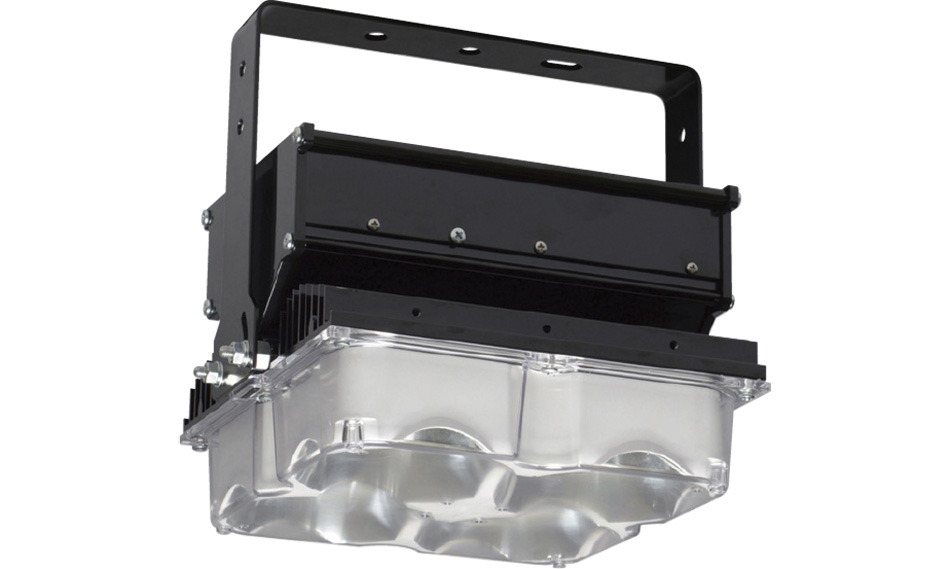 Hitachi has released 27 models of LED high-bay luminaire for commercial lighting that offer high energy saving performance and have a compact, lightweight design.

*1
Comparison between the new products and 16 previous models in the same class such as MTE2203NN-J14B (height 362 mm, maximum width 404 mm, weight 5.3 to 6.5 kg) according to the study undertaken by Hitachi Appliances, Inc.
*2
The light source lifetime is the design life of the LED module calculated based on a thermal design determined for each LED and may vary depending on the conditions and method of use.