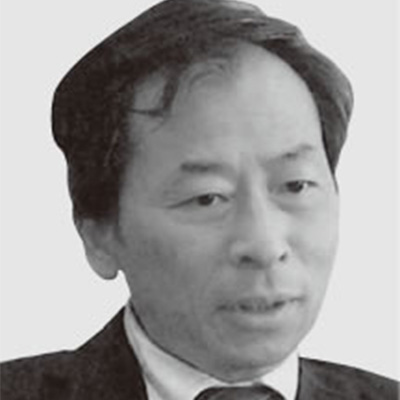 R&D Center, Hitachi Industrial Equipment Systems Co., Ltd. Current work and research: Research and development of materials and processes related to the environment and energy conservation. Society memberships: The Chemical Society of Japan, the Japan Society of Mechanical Engineers, the Japan Society of Applied Electromagnetics and Mechanics, and the Engineering Academy of Japan.

These devices and machines are key products that support a wide range of business sectors, including the manufacturing sector and the natural resource and energy sector.

Motors, inverters, and controllers, as part of drive systems and power electronics products that achieve efficient energy utilization, are saving energy in manufacturing and rail transportation. Also, pumps, fans, blowers, air compressors, and other equipment are supporting social and industrial infrastructure, providing a highly stable and reliable supply of air, water, gas, and other fluids to power plants and water and sewage plants. Furthermore, devices that receive, transform, and distribute power are contributing to the stable supply of electric power, which is the core of social infrastructure.

Increasing the efficiency of these devices and machines and reducing their size and weight will contribute to the realization of a low-carbon society. The articles that follow discuss the development of stationary high-efficiency transformers, the improvement of technology for reducing the environmental load of rotary machines and increasing their reliability, new energy-efficient air compressors, and industrial Internet of Things (IoT) devices and business expansions.

Figure 1 shows a breakdown of greenhouse gas emissions and electricity consumption in Japan as of 2005 when the Kyoto Protocol of the United Nations Framework Convention on Climate Change took effect. The figure implies that to cut greenhouse gas emissions, taking relevant measures in the industrial and transportation sectors would be effective, and that reducing the power consumption of motors is urgently needed. Many motors are used in various areas, including in industry, cities, and home appliances. A 1% increase in their efficiency is estimated to be equivalent to eliminating a 1-MW power plant.

As Figure 2 shows, since its founding, Hitachi has reexamined the rotor, frame, and electrical insulation materials used in its 5-hp (3.7-kW) motors and the manufacturing process; reduced the size and weight of the motors; and increased their efficiency. Size and weight reductions contribute not only to resource conservation but also to increased transportation efficiency. The weight has been reduced from about 140 kg initially to 1/50th of that value. Since its founding, Hitachi has constantly reduced the size and weight of its 5-hp motors. The size and weight reductions contribute to not only resource conservation, but also increased transportation efficiency.

3. Further Increases in Efficiency through Innovations in Materials

The efficiency of industrial motors is standardized by the International Electrotechnical Commission and is described in the International Energy Efficiency Code (IE). Taking advantage of the characteristics of iron-based amorphous alloy, Hitachi Industrial Equipment Systems Co., Ltd. developed IE5 class motors, which are currently considered the most efficient.

Amorphous alloy is a general term for amorphous metal without a crystalline structure. For the development of IE5 class motors, Hitachi used an iron-based amorphous alloy that mainly consists of iron and was discovered in the 1960s. This alloy has been investigated since the 1970s for possible applications. As Figure 3 illustrates, the alloy's high magnetic permeability makes it possible to manufacture a highly efficient iron core and achieve a high magnetic flux density without using neodymium magnets, which require the use of rare metals such as neodymium and dysprosium. Also, the alloy is characterized by low core loss and thus is an excellent soft magnetic material.

However, iron-based amorphous alloy is in the form of thin ribbon (several tens of micrometers thick) and is vitreous with a Vickers hardness value of 900 HV or higher. Therefore, the alloy is hard, brittle, and difficult to handle. Hitachi Industrial Equipment Systems started in 1991 to produce transformers that took advantage of the characteristics of iron-based amorphous alloy and has applied relevant know-how to the manufacturing of iron cores whose shapes are highly complex (see Figure 4). 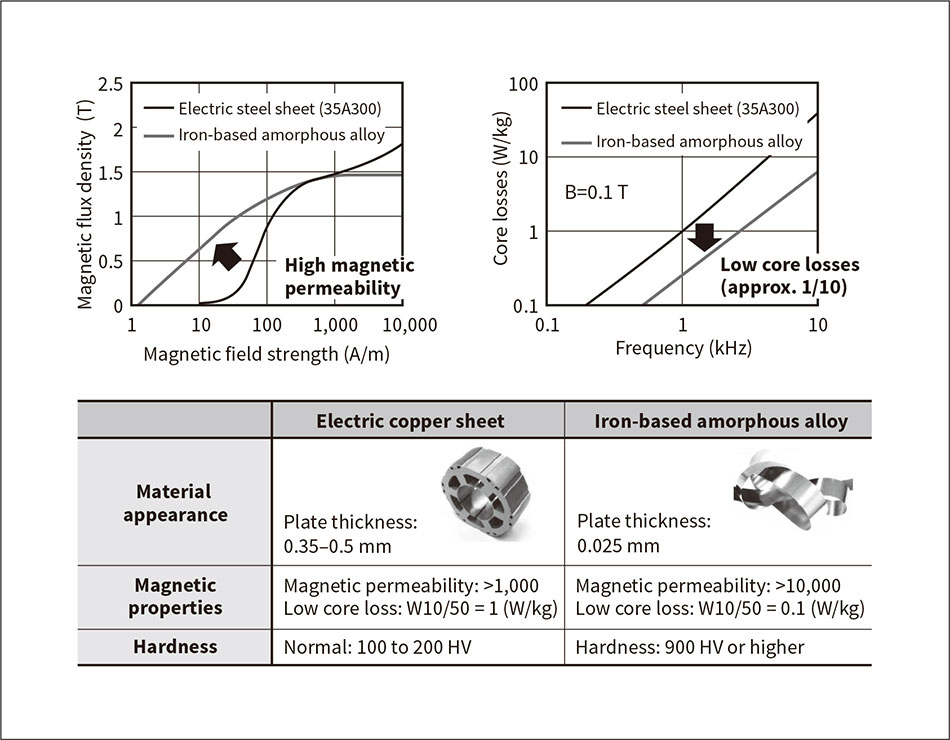 Iron-based amorphous alloy is characterized by high magnetic permeability and low core loss. However, because the plate thickness is low and the material is hard and brittle, it is difficult to handle the alloy. 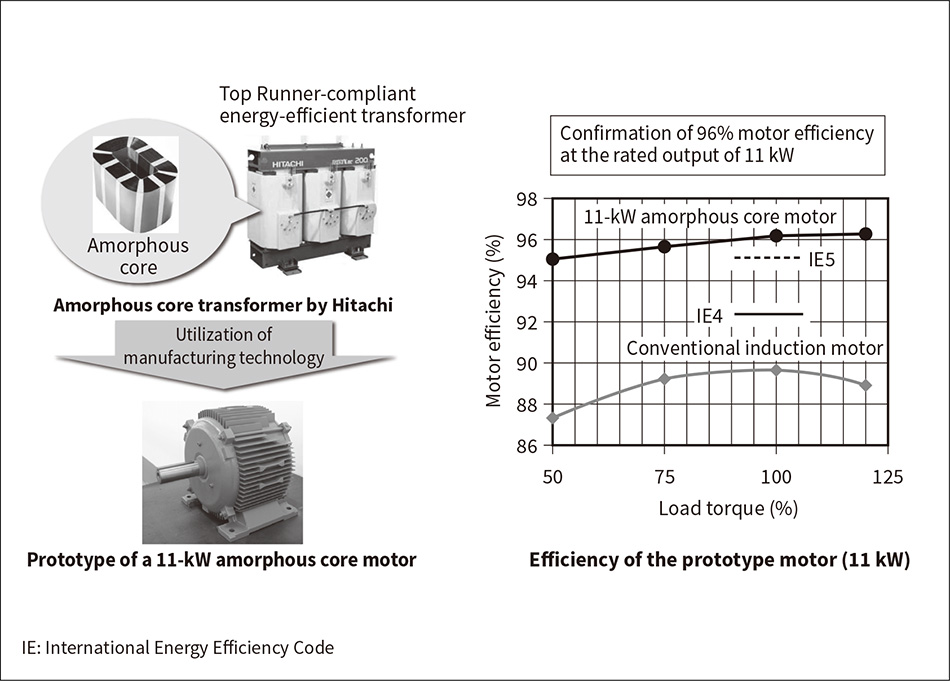 Taking advantage of the manufacturing technology used for amorphous core transformers, which began to be produced in 1991, Hitachi Industrial Equipment Systems Co., Ltd. created a prototype of a motor that utilized iron-based amorphous alloy. The prototype motor had an efficiency of 96% at a rated output of 11 kW.

4. Industrial Products and the IoT

Figure 5 — Industrial Products and the IoT 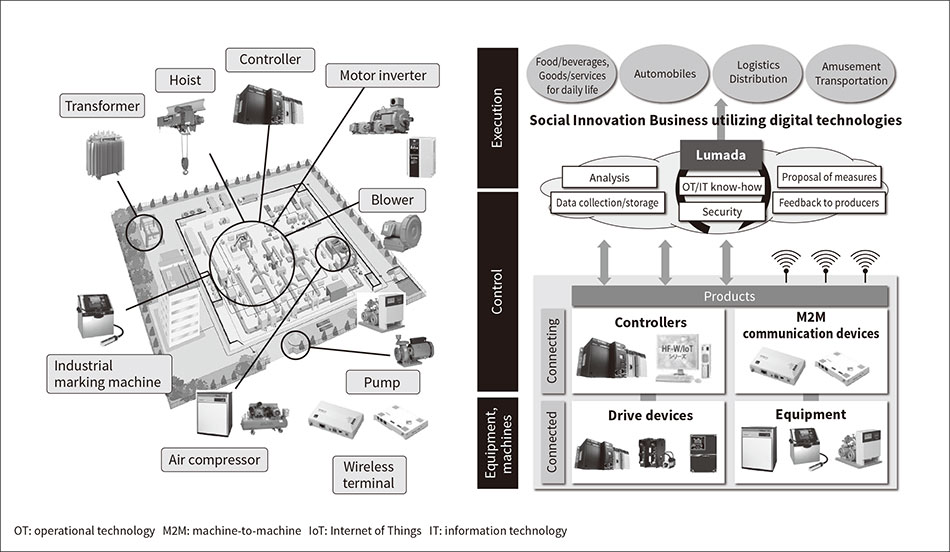 Hitachi will not only continue to develop products that contribute to the environment and energy conservation, but also accurately identify changes in the market where progress in the IoT is being made and will contribute to social innovations while utilizing Lumada and responding to the needs for connected and connecting devices and machines.