Creating Innovation through the Digitalization of Ekimachi Spaces

Creating Innovation through the Digitalization of Ekimachi Spaces

The collaborative creation of services in urban fields such as stations and city spaces (collectively, “ekimachi”) is being undertaken to help achieve a super smart society. Along with improving convenience for users, stations and cities also need to enhance their own value and the operational efficiency of the business operators they host. Combining safety, security, and convenience in stations and city spaces is a particularly important challenge. Hitachi is confronting this social and industrial challenge, and is working to create innovation to overcome it through collaborative creation with customers. This article presents examples of how the behaviors and activities of station and city users are being digitalized and tied in with services. 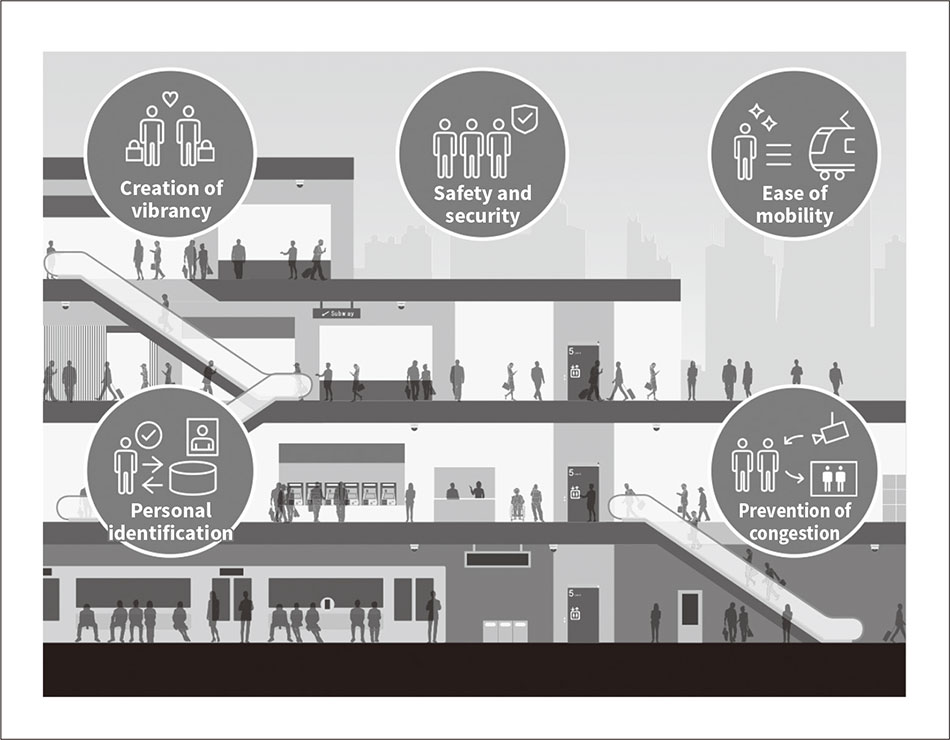 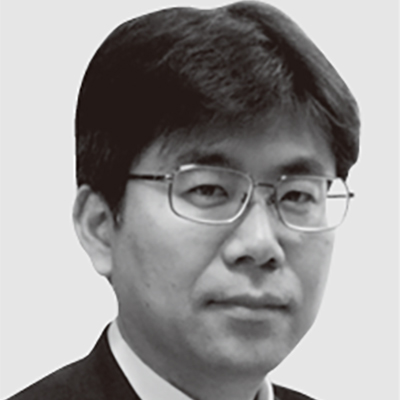 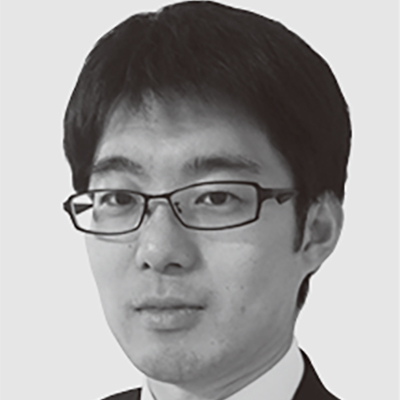 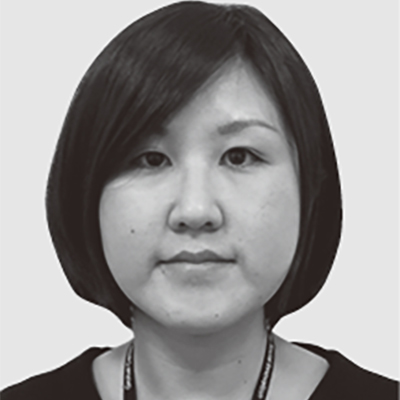 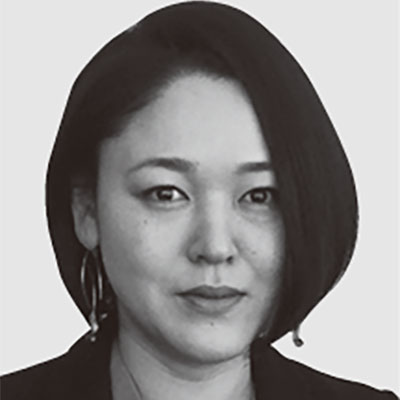 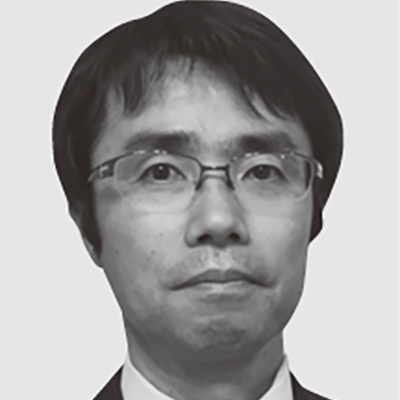 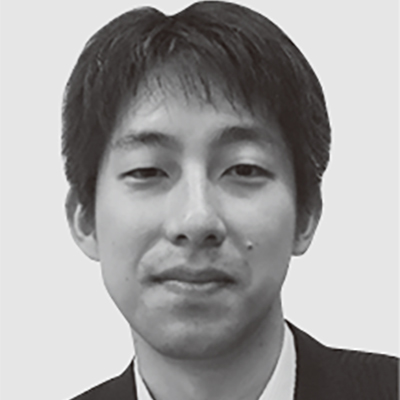 Given the increased movement of people around the world associated with globalization and the concentration of populations in cities due to urbanization, a need has arisen in society for the construction of urban spaces that create vibrancy while still allowing people to feel secure, and for the provision of efficient ways of getting around. Combining safety, security, and comfort is a major challenge for the realization of a “super smart society.”

Called “ekimachi” in Japanese, these stations and cities are becoming public spaces where a wide range of people come together, including not only local residents, but also office workers, customers visiting the shopping centers located inside the station complexes, and tourists from overseas. There is a need for new ideas that can ensure the safety and security of such ekimachi while at the same time enhancing convenience and creating vibrancy by attracting more users. Hitachi is engaging in collaborative creation with customers to create and implement solution ideas with the aim of fostering innovation in these ekimachi.

2. Scope of Innovation Created through Digitalization

Understanding when and where congestion will occur in public transportation and city districts is beneficial, not only to transportation service providers, but also to the passengers who use this transportation. If users can be identified, it will become possible to provide people who find mobility difficult with suitable ways to get around, and to implement services for watching over people. Similarly, if people carrying dangerous goods or engaging in dangerous behavior can be identified preemptively, it will also help prevent crime and other incidents. Accordingly, the ability of systems that use digital technology to capture and analyze the movement and behavior of people in an ekimachi opens up the potential for creating a wide variety of valuable services. On the other hand, recording behavior and other information about these people in digital form also gives rise to privacy concerns. This means it is essential that adequate consideration be given to privacy protection when utilizing digital data about people.

Figure 1 shows the services Hitachi is aiming to develop. These are useful in helping to prevent congestion by using people flow analysis technologies to digitize and visualize the movements and behaviors of individuals and groups. Furthermore, the use of finger vein authentication technology to verify people's identity, or image recognition to extract human attributes opens up the potential for creating services that contribute to safety and security, and other new services such as hands-free payments.

The following section describes examples of these services and technologies.

Along with services that prevent congestion and help maintain the safety and security of users, there is also the potential to create new services such as hands-free payment.

3.1 Warning of Congestion in Station Buildings Prior to Arrival: The Eki-Shi-Vision* Service of Tokyu Corporation

The congestion in station buildings, trains, and elsewhere during rush hour or as a result of delays is an ongoing challenge faced by the users of public transportation, especially railways. Railway stations sometimes become so overcrowded that it is impossible to even get to the platforms. This can happen as a result of events taking place nearby or natural events such as heavy snow or sudden rainstorms. For example, the disruption of transportation services after the Great East Japan Earthquake on March 11, 2011, caused commuters concerned about having difficulty returning home to rush to railway stations causing severe congestion in the station buildings. Similarly, the suspension of services or operating restrictions on various railway lines caused by a heavy snowfall in the Kanto region on January 18, 2016, resulted in some stations becoming so overcrowded that they had to restrict admission into station buildings.

Events like these create stressful working conditions for station staff as railway operators need simultaneously to keep passengers safe and to provide them with appropriate information. Although railway operators have adopted various measures for dealing with congestion during emergencies, the challenge is not easily solved.

Recognizing this challenge, a study was undertaken of how to prevent congestion in station buildings by helping people make their own decisions about what to do, such as giving them an understanding of congestion conditions in a station before they arrive so that they can defer going to the station. Specifically, the idea was to utilize the surveillance cameras that are being installed to keep passengers and property safe by delivering a visual indication of the congestion conditions in a station building to the station users in real time. However, a major challenge to this was the protection of privacy.

In response to that challenge, a method was proposed of utilizing people flow analysis technologies that can recognize the positions of people, and their speed and direction of movement, from movement information acquired from surveillance camera video. The people identified by this would then be replaced with avatars that were superimposed over the background photo [see Figure 2 (b) and (c)]. The method also devised a means of representing people in a different color depending on their state of motion. This idea was made possible by using Hitachi's image recognition technology, which can recognize whether a person is moving or not and capture that state as digital data. This idea made it possible to obscure both people's appearance and the color of their clothing, which meant that the congestion conditions could be conveyed without compromising the protection of privacy. It was further improved to express more dynamism by changing the display based on the direction in which people were moving, using avatars that also indicated the direction of movement (see Figure 3). This made it possible to convey a better representation of the congestion conditions by being closer to the real video.

Currently, it is possible to view the congestion conditions at approximately 60 different stations in real time by selecting them from the Eki-Shi-Vision service menu in the Tokyu Line smartphone app.

*
Eki-Shi-Vision is a trademark of the Tokyu Corporation.

Figure 2—Sequence of Ideas for Visualizing Congestion in Station Buildings 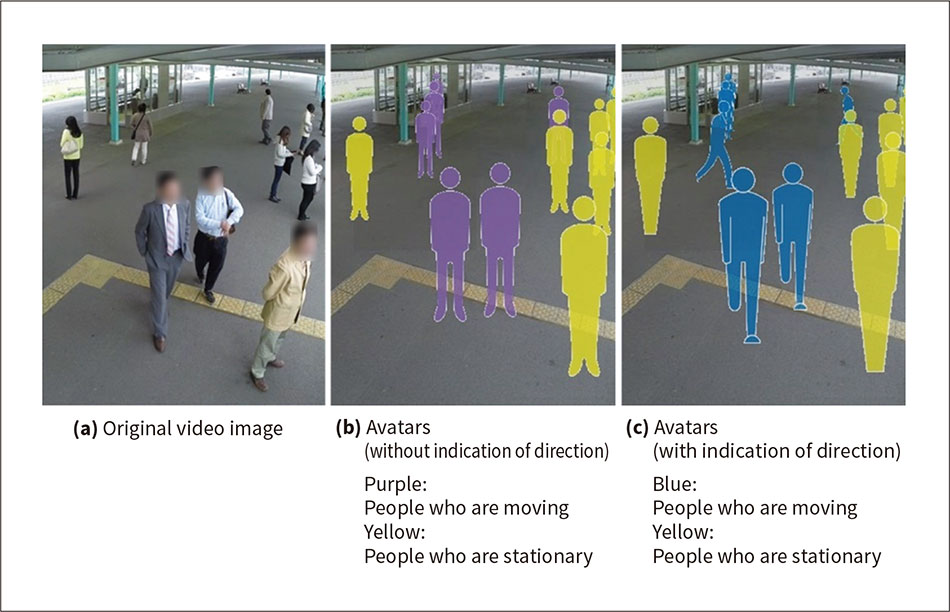 As the color and direction of the avatars provide an indication of whether people are stationary or moving and which direction they are going, even when large numbers of people are detected, it is clear at a glance whether the congestion is of the normal sort that happens during rush hours or whether it has built up due to an abnormal event.

There is rising demand for solutions that ensure security by verifying people's identity at the entrance of buildings that are visited by large numbers of people or large stadiums that host sporting events. The use of ticket gate-type systems at the entrances of buildings and the entry gates of stadiums is common. This is because these gate systems serve as appropriate and natural interfaces for controlling access to the interior of an area. Unfortunately, because current personal authentication technologies take a certain amount of time, using them as is can result in long lines at the gates. The potential for congestion at entry gates to lead to secondary accidents due to being knocked down and so forth means that there is a need to combine identity verification with high throughput. It was against this background that Hitachi embarked on the development of a walkthrough entry gate that utilizes biometric authentication.

While finger vein authentication features high accuracy, past implementations have required people to place their finger on a scanner, which made it difficult to use for walkthrough applications that work like ticket gates. In response, Hitachi combined a ranging camera for determining hand location and shape with a near-infrared camera for capturing finger vein images to reliably read the finger veins of a moving hand at high speed. This system was then installed in a gate [see Figure 4 (a)]. Hitachi also produced a design for the hand panel that naturally causes people passing through to wave their hand over it, thereby enabling contactless authentication that works without the person having to touch the unit's authentication panel [see Figure 4 (b)].

These design improvements succeeded in maximizing the user experience and leading to innovations in entry gate styles. Benefits include both the same high throughput as a ticket gate and the elimination of the need to touch anything (contactless authentication).

Photo (a) shows the prototype, and the photos in (b) show the design of the gate developed based on a study of shapes that would encourage users not to touch the panel (contactless authentication). The design shown in (b) naturally induces people to wave their hand over the panel.

A survey by the Ministry of Health, Labour and Welfare found that the effective job openings-toapplicants ratio for jobs in security, including security guards, has reached approximately five. This means there is a labor shortage throughout the entire industry. Given these circumstances, in addition to obtaining enough people to staff large events such as sporting events, there is a need for security solutions that use information and communication technology for efficiently deploying a limited number of people.

In response, Hitachi is investigating a solution that enables efficient security at large events and other venues by applying technologies that use artificial intelligence (AI) to identify people or objects in the video from surveillance cameras. The ability of this solution to detect incidents in real time by having AIs learn the appearance of people and objects that are of interest to security, and to issue alerts together with video information to a monitoring center has been demonstrated (see Figure 5). This technology can be expected to enable efficient action to be taken when providing security at major events and other such venues. This system provides real-time identification and tracking of people by using AI for video analysis. As individuals are identified based on a combination of more than 100 characteristics, it can track their movements over a wide range of video images. The photos shown here were taken at a railway station with the cooperation of volunteers.

Hitachi is working with customers on initiatives for verifying value, with the aim of delivering innovations that combine safety, security, and comfort in ekimachi areas. The outcomes of this research have included an information delivery service that prevents the spread of confusion at stations by helping people make their own decisions, and a high-throughput entry control system that prevents lines from forming at entry gates. The information delivery service works by delivering a visual indication of the congestion conditions in a station building to smartphones in a format that has been processed to protect privacy. The entry control system features gates with built-in biometric authentication that can verify people's identity instantaneously.

Through these initiatives, Hitachi is helping to achieve a super smart society that combines convenience with safety.