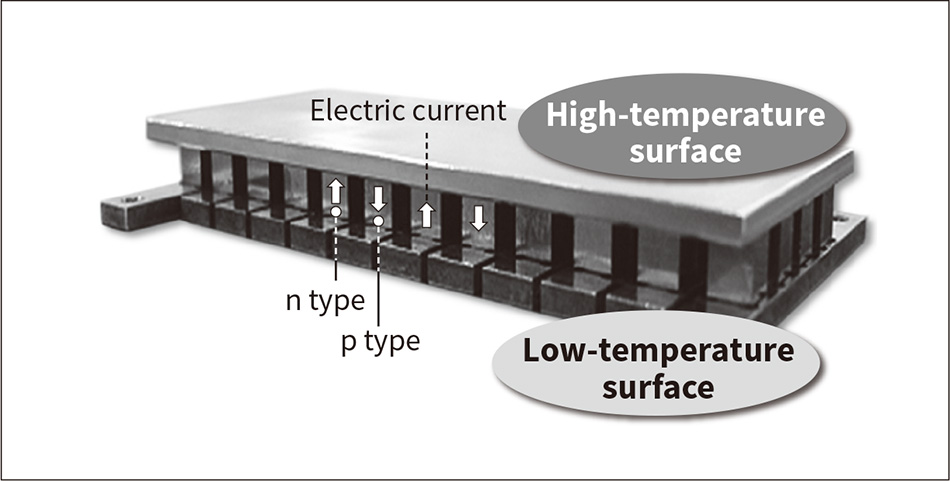 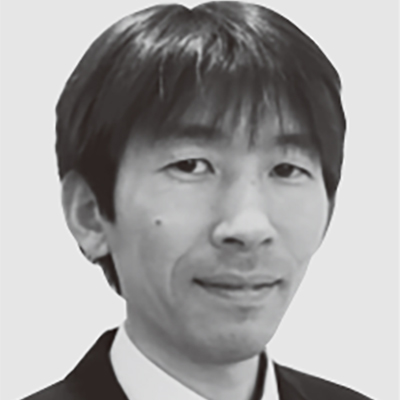 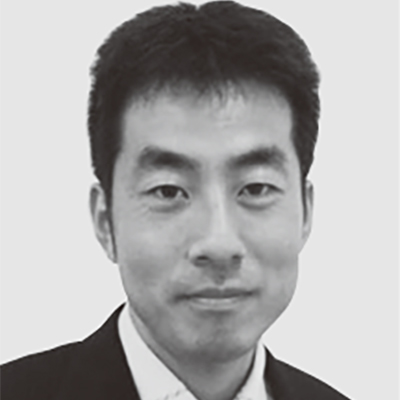 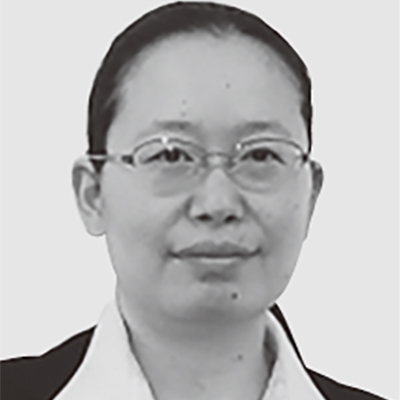 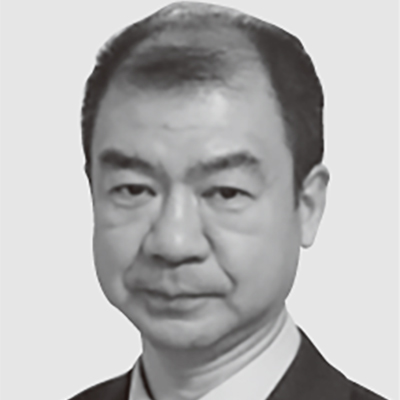 With the trend toward improving energy efficiency and conserving the Earth's resources and environment picking up pace around the world, there is a need to use energy more efficiently and to exploit unutilized thermal energy, as well as to develop energy technologies with low carbon dioxide (CO2) emissions to help prevent global warming. Hitachi is developing innovative energy conversion materials that facilitate work on such green innovation.

The module is constructed with p-type and n-type thermoelectric materials that are connected in series via electrodes, and generates voltage in the direction opposite to the direction of the temperature difference between its upper and lower surfaces.

Thermoelectric conversion is a method of generating electric power by the direct conversion of thermal energy into electrical energy using the Seebeck effect, which generates power from the temperature difference across a thermoelectric semiconductor. Prompted by the problems associated with rising energy consumption, including the scarcity of fossil fuels and global warming caused by CO2, there has been interest in recent years in thermoelectric modules that can recover industrial or automotive waste heat (from low temperatures below 200°C to high temperatures of around 500°C) that has gone unused up until now.

Made of p-type and n-type thermoelectric materials connected in series via electrodes, a thermoelectric module generates electric power in response to the temperature difference between its upper and lower surfaces (see Figure 1). Here, the conversion efficiency of the thermoelectric module is determined by the dimensionless figure of merit ZT (Z = S2/ρκ, where S = Seebeck coefficient, ρ = resistivity, κ = thermal conductivity, and T = temperature) of the elements that are used. For example, being able to achieve a value of ZT = 1 to 2 can improve engine fuel efficiency by 1% to 5%, so there is a need to develop materials with a high ZT.

3.1 Application of a Thermoelectric Module to Gas Cogeneration

This section describes power generation in terms of applying a thermoelectric module to a cogeneration system.

A cogeneration system uses fuel such as gas and supplies electric power from the engine and hot water generated from the engine waste heat. However, in many use cases, low-temperature water below 80°C is discarded without being utilized fully. In response, Hitachi tested the conversion of unutilized hot water (below 80°C), generated by cogeneration, into high demand electric power.

Figure 3 shows the dependency that the thermoelectric module voltage has, as measured using the designed flow paths, on the hot water and cold water temperature difference ΔT. Higher output voltage was obtained by applying flow paths that have an internal fin structure in comparison with conventional flow paths that do not have such a structure, and an output equivalent to a maximum of 600 W/m2 at a temperature difference of ΔT = 53.5°C was confirmed. To achieve further output increases, Hitachi is developing new high-performance thermoelectric materials that are both low cost and non-toxic. 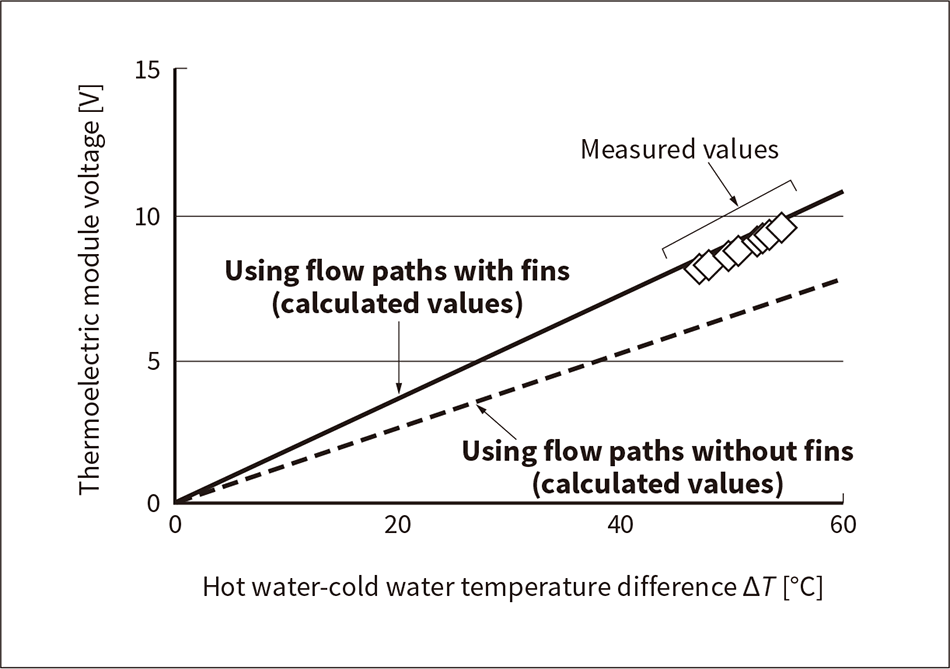 The output of the thermoelectric module is increased by using flow paths with fins. A maximum output of 600 W/m2 is obtained at a temperature difference of ΔT = 53.5°C. 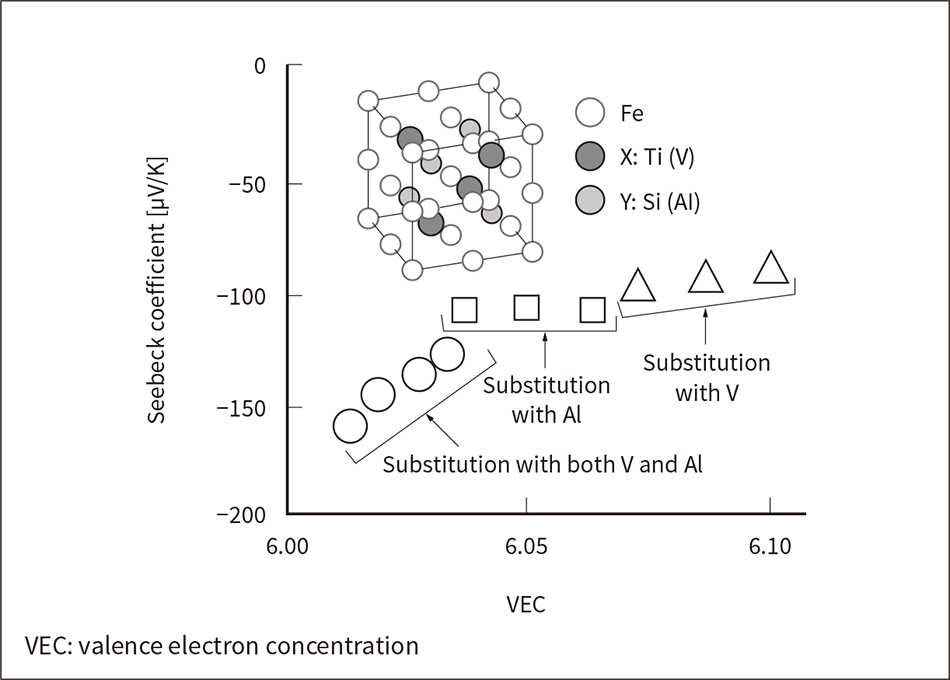 The Seebeck coefficient is increased by substituting V for Ti and Al for Si.

The iron-based full Heusler alloy, written as Fe2XY (Fe: iron), gains its thermoelectric performance from its crystal structure, in which each element is ordered based on a body-centered cubic lattice. In this material system, the valence electron concentration (VEC), derived by dividing the sum of the valence electrons of the structural elements by the number of atoms inside the unit crystal lattice, is modified by substitution of other elements and adjusted so that the VEC is approximately 6. This increases the Seebeck coefficient, which is the elemental physical property value of ZT(2). From the approximately 100 element types that Hitachi identified through previous first-principles calculations, it identified Fe2TiSi, with titanium (Ti) used for X and silicon (Si) used for Y, as a candidate component with a high Seebeck coefficient(3).

In the future, Hitachi will proceed with developing bulk materials that can be mounted in thermoelectric modules.

This section describes the bulk synthesis of silicide materials(5), which are noted for their low cost and low environmental impact, and the search for new composite silicides that have performance exceeding conventional silicides, for the purpose of application in thermoelectric modules designed for medium to high temperatures.

Previously, Hitachi has produced nanocomposite material thin films, consisting of higher manganese silicide (MnSi1.7) and Si, that demonstrate low thermal conductivity, below the 1 W/Km required for achieving ZT = 2(6). In this research, Hitachi tested the use of nanocomposite bulk synthesis as the form for mounting in thermoelectric modules.

First, manganese (Mn) and Si were pulverized together with a precursor powder into a powdered alloy using the mechanical alloying (MA) method. Then, the alloy was sintered using the spark plasma sintering (SPS) method. Figure 5 (a) shows the results of crystal structure identification using powder X-ray diffraction after MA processing and SPS processing. For both powders, strong MnSi1.7 diffraction peaks (●) and Si diffraction peaks (▲) were observed, and there was no heterogeneity. Also, Figure 5 (b) shows the results of microstructure observation by transmission electron microscopy (TEM) of the bulk sample after SPS processing. From the image, it can be seen that the nanostructure is formed from grains that range in size from 50 nm to 200 nm. In addition, in the same figure, from inset images (A) and (B), which show an enlarged TEM image and an electron diffraction image, it can be seen that the grains have crystallized. These results demonstrate that the synthesis of a nanocomposite bulk consisting of MnSi1.7 and Si is possible.

Figure 5—X-ray Diffraction (a) and Electron Microscope Image (b) of MnSi1.7/Si Composite Material 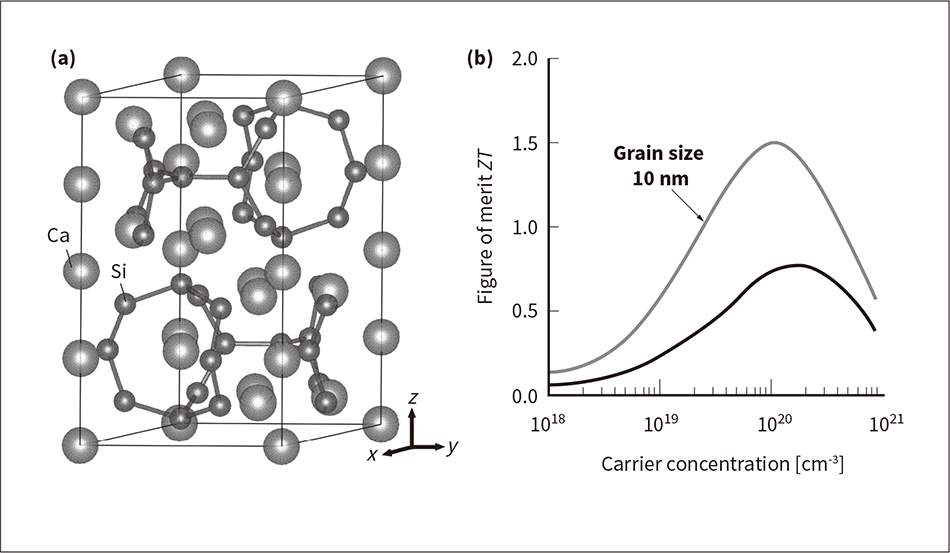 Figure 6 (a) shows the crystal structure of Ca3Si4, which has a crystal structure where Si forms complex bonds. Therefore, it is expected that propagation will be restricted within the phonon crystal lattice, which is the thermal conduction medium, reducing lattice thermal conductivity. Because highly complex computations are required for this calculation, the K computer was used, and showed that actual lattice thermal conductivity could be reduced to 1 W/Km or less(7). Furthermore, Figure 6 (b) shows the results of an evaluation of the dependency of carrier concentration on the ZT of Ca3Si4 that was calculated from the electrical conductivity and Seebeck coefficient using the Boltzmann transport equation. It was found that ZT = 1 could be achieved by setting the carrier concentration to approximately 1020/cm-3. Also, by refining the grain size to 10 nm and reducing thermal conductivity by increasing phonon scattering at grain boundaries, ZT could be increased to 1.5.

This article has described an example of applying thermoelectric modules that convert unutilized thermal energy into electric power to the low-temperature wastewater from gas cogeneration, an iron-based full Heusler alloy, and silicide-based thermoelectric materials that have been developed with the aim of increasing the efficiency and reducing the costs of thermoelectric modules.

In the future, Hitachi will continue aiming to achieve a green innovation society by making further performance improvements in thermoelectric modules and thermoelectric materials.

Some results in this article were obtained in work commissioned by the New Energy and Industrial Technology Development Organization (NEDO).