Water Environment Solutions Based on Advanced Technology and Comprehensive Capabilities

The water industry is facing increasingly difficult circumstances, including falling revenues due to lower demand for water, aging infrastructure, and the retirement of experienced technical staff. Hitachi is trying to develop regional coordination technologies for reducing the operating costs and capital investment of water utilities and technologies for consolidation and downsizing of the water supply infrastructure. 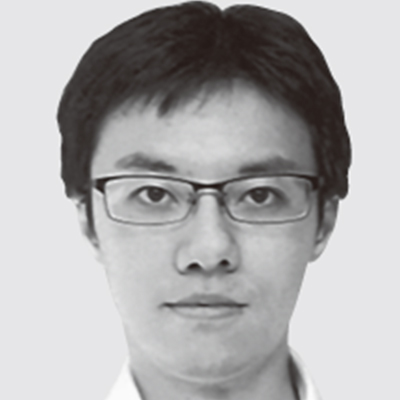 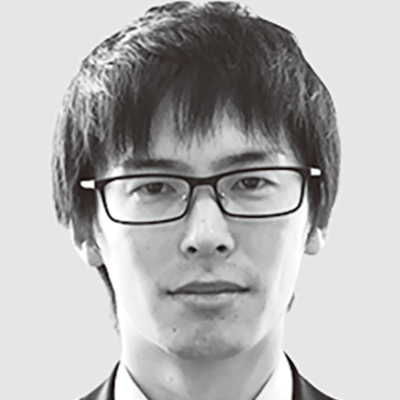 The water industry is facing increasingly difficult circumstances, including falling revenues due to lower demand for water, aging infrastructure, and the retirement of experienced technical staff. These circumstances are making it essential to improve water supply technologies and to put water utilities on a sounder business footing, and studies are being conducted into ways of dealing with these challenges(1).

Potential core policies include: (1) greater regional coordination to deliver economies of scale while also ensuring responsiveness in the face of disasters, and (2) collaboration between the public and private sectors to encourage the use of technologies, know-how, and personnel from the private sector through initiatives such as public–private partnerships (PPPs), private finance initiatives (PFIs), and concessions. In particular, greater regional coordination has the potential to resolve difficulties with staff recruitment and other management challenges faced by small and medium-sized water utilities that find it difficult to strengthen their business model on their own. This regional coordination can take on a variety of different forms, encompassing not only mergers as in the past, but also centralization of operations or management and the sharing of infrastructure.

The cabinet decided to revise Japan's Waterworks Act in March 2017 to facilitate these measures. This included the following policies(2).

(1) Regional governments are to take the lead in pursuing regional coordination while the central government establishes the core comprehensive policies and provides technical and financial support.
(2) PPPs will be encouraged by introducing mechanisms whereby private operators can be granted a right to operate public infrastructure while the regional government agency retains ownership.

With a focus on regional coordination in particular, this article describes technologies for using system-wide optimization to reduce the operating costs and capital investment of water utilities. With regard to cutting operating costs, an example of management centralization is used to describe technologies for operating water services that allow regional coordination with the aim of cutting the cost of electric power use. This involves both horizontal integration (coordination between a number of utilities that distribute water to end users) and vertical integration (coordination between source water suppliers and utilities that distribute water to end users). With regard to reducing capital investment, the article describes consolidation technology for the effective sharing of infrastructure, and downsizing technology that anticipates future declines in water demand.

Greater cuts in peak demand for electric power can be achieved when a number of utilities coordinate the operation of their water networks in response to demand response requests.

One form of regional coordination is the centralization of management referred to above. Along with economies of scale, this centralization should also cut costs through improved operational efficiency.

This section presents an example of how electricity costs were effectively reduced by the regional coordination of water operations in response to the problems posed by electricity demand response (DR). DR is a way of ensuring the security of electric power supply. Water utilities receive instructions from the power company (or an electricity aggregator) specifying how much to reduce their power consumption and for how long. The water utilities, in turn, earn incentive payments in return for cutting their power demand to help maintain a reliable supply of electric power.

Figure 1 shows an example involving the reallocation of water between a number of utilities, that is, regional coordination, in the case where source water suppliers provide water to distribution utilities. When the volume of water being reallocated is comparatively large, careful adjustment of this volume (which affects multiple utilities) can deliver greater DR benefits (greater reduction in peak demand for electric power).

Using the volume of water being reallocated as a boundary condition, the system looks for the optimal solution across the different utilities and calculates the total reduction in peak demand during the DR time period. It then either increases or decreases the volume of water being reallocated (depending on which action will obtain a better solution) and repeats the calculation so as to achieve effective system-wide optimization, meaning the solution that delivers the largest reduction in power consumption.

The example calculation in Figure 1 shows the results of simulating a water network in which four cities are linked by interconnecting pipes. The simulation shows that, in this case, the total reduction in peak demand for electric power during the DR time period when the utilities in the four cities coordinate their operations is roughly double the reduction when they operate independently. This allows them to reduce the cost of electric power because they are able to earn higher incentive payments.

The core objective of consolidation is to reduce the cost of upgrading and maintaining water supply infrastructure and to improve its efficiency of operation by combining facilities. There are two main technical challenges with consolidation. The first is to determine the location and capacity of the water treatment plants, service reservoirs, and pumping stations. The purpose is to maintain treatment and storage capacity while preventing unbalanced or low water pressure, taking account of the long-term downward trend in water demand. The second challenge is to minimize the amount of piping that has to be laid to connect the consolidated infrastructure together. Consolidation changes the location of infrastructure and the loads to which it is subjected, and this may require upgrades involving laying new piping and duplicating pipelines. To keep expenditures on new construction to a minimum, this is only done when necessary.

To deal with these challenges and to help achieve effective consolidation, Hitachi is working on the research and development of a support tool for developing consolidation plans that incorporates a geographic information system (GIS), hydraulic analysis, and optimization functions (see Figure 2). The support tool first uses GIS to produce a consolidation plan. Its flexible manual drawing capability allows it to produce a plan that incorporates the characteristics of the city and the know-how of the designer. Next, hydraulic analysis is used to evaluate the hydraulic and water quality aspects, such as water pressures, residual chlorine concentrations, and service reservoir capacities. The consolidation plan is finalized by making changes as needed to the service reservoir or pumping station capacities, or to the location of new pipelines. The costs of the consolidation plan (the cost of new construction, upgrades, and power) are also determined. Once the location of infrastructure has been finalized in the consolidation plan, it is run through a function for infrastructure optimization that calculates the pipe diameters and pump discharge pressures needed to minimize the initial investment, power, and other costs. The process is then repeated until the final plan is obtained.

The benefits of using this technology to consolidate water supplies were evaluated using simulated data from a particular utility. Although the data were from only a single utility, there was a set of problems similar to the consolidation of a number of utilities, because its infrastructure was scattered over a wide area with considerable scope for consolidation and because potential efficiency gains could be realized from restructuring on the basis of lower demand. As the region had a large number of small service reservoirs and pumping stations that served a population of around 100,000 people, it was facing the prospect of having to spend more on upgrades. Another challenge was complex operation due to supplying a single distribution area from a number of water treatment plants and service reservoirs. A consolidation plan for this water transmission and distribution system was devised that would minimize upgrade costs while also reorganizing the water supply area to clarify how the load is spread across several water treatment plants.

Figure 3 shows the infrastructure layout before and after consolidation and the cost-benefit achieved by integration. The consolidation process involved increasing service reservoir capacity while also taking small service reservoirs and pumping stations out of service, and confirming that this did not cause any problems for hydraulics or water quality. This reduced upgrade costs over the long term. On the other hand, it resulted in a small increase in new capital investment and power costs. Nevertheless, the consolidation process delivered a reduction of approximately 6% in total lifecycle costs. 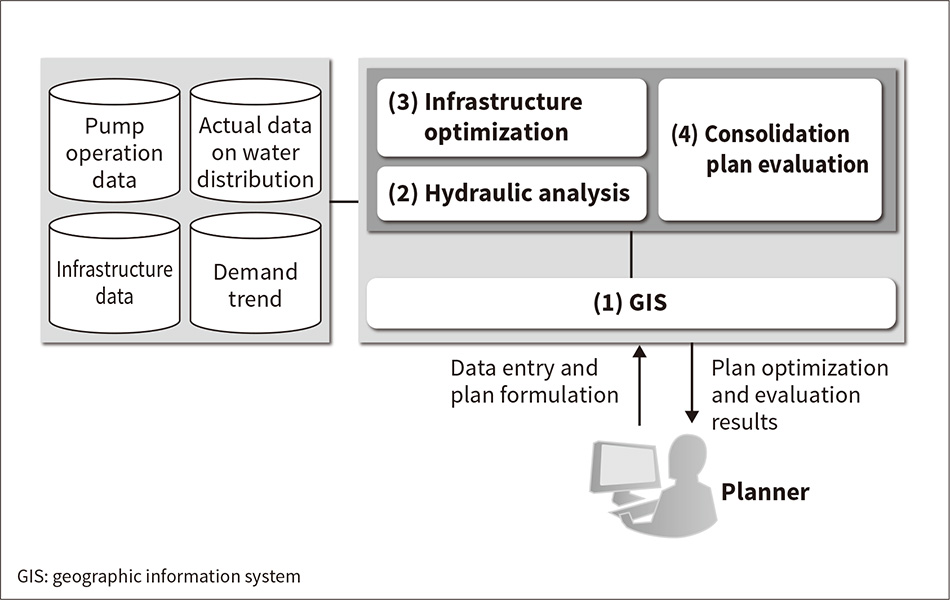 This support uses GIS and functions for hydraulic analysis, evaluation of consolidation plans, and infrastructure optimization, in turn, to help formulate the optimal consolidation plan that minimizes the sum of capital investment and operating costs without compromising hydraulic and water quality requirements. 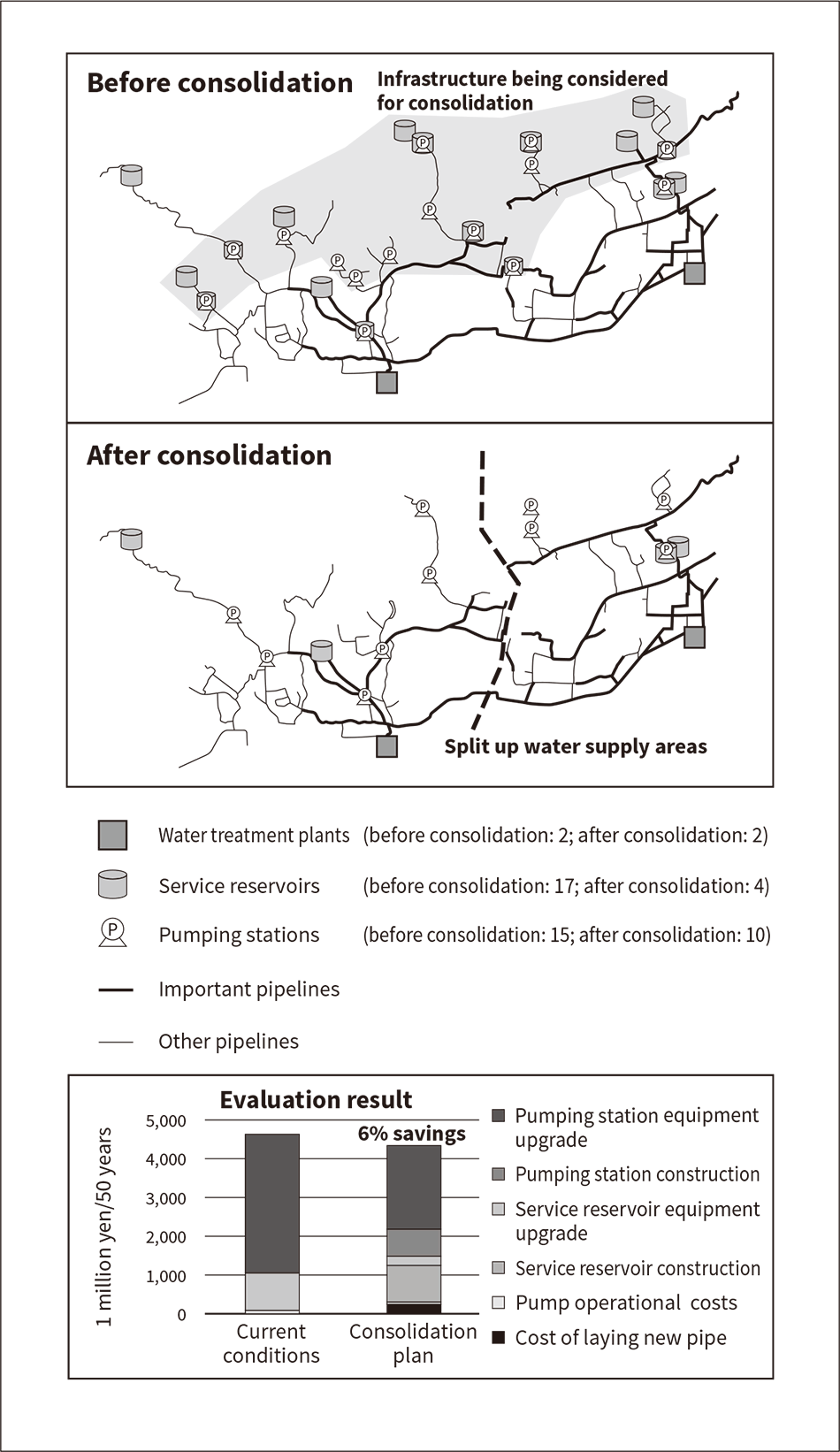 A consolidation plan was devised to reduce upgrade costs over the long term while also highlighting which infrastructure serves as a hub.

This section describes technology for downsizing pipelines in anticipation of falling demand. This technology can be used alongside the consolidation technology described above.

When demand for water is falling, the challenge with pipeline downsizing is to determine the pipe diameters and the timing of upgrades (or upgrade order) that minimize lifecycle costs without compromising hydraulic and water quality requirements. It is likely that the timing of upgrades will be determined by the utility's own practices or upgrade policy. Accordingly, this section assumes that the utility will follow its own practices for such making decisions, and instead describes the use of mathematical optimization to calculate the best pipe diameters.

The mathematical optimization problem for determining the best pipe diameters is defined as determining the pipe diameters, pump capacities, and other parameters that satisfy the hydraulic and water quality requirements and minimize lifecycle costs (the sum of capital investment and operating costs) on the basis of forecast demand and the timing of pipe upgrades.

Figure 4 shows an overview of how the downsizing technology uses mathematical optimization. A hydraulic analysis is performed using the assigned pipe diameters to calculate water pressure and quality. Along with confirming that these satisfy the requirements, this information is also used to calculate the lifecycle costs associated with laying pipe and operating pumps. This process is used to perform an optimization calculation that finds the pipe diameters that minimize lifecycle costs while still satisfying the requirements. Next, a sensitivity analysis is performed to determine whether the hydraulic and water quality requirements are still satisfied for different variations in future water demand. The final results are the optimal pipe diameters that satisfy the requirements at minimal cost. 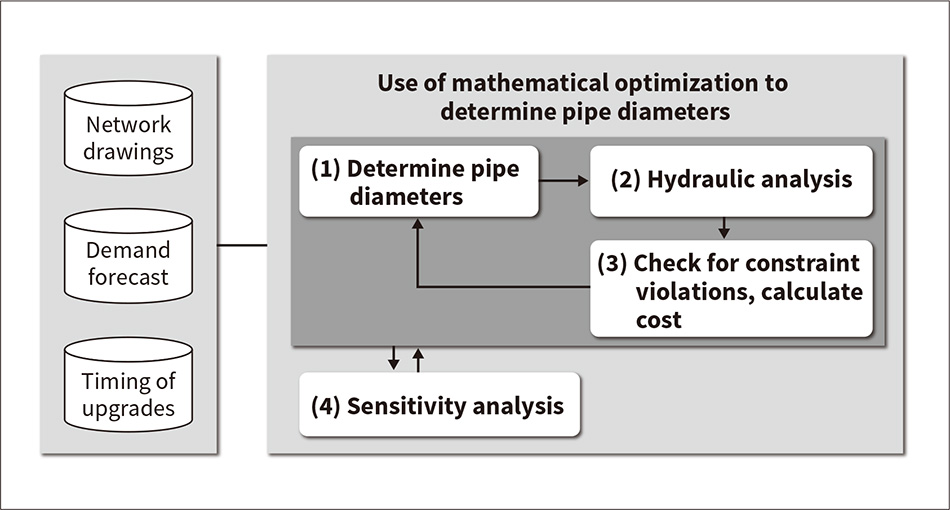 This downsizing technology uses hydraulic analysis and optimization based on network drawings and future demand to determine optimal pipe diameters while also performing a sensitivity analysis.

The downsizing technology was applied to the hypothetical water distribution network shown on the left in Figure 5. The network has a demand of approximately 6,000 m3/day and approximately 50 km of pipes. It is anticipated that demand will be 60% of the current level after a certain number of years. The right side of Figure 5 shows the layout of the reconfigured network. A considerable amount of downsizing has been achieved, with 200-mm and 150-mm pipes used for most of the important pipelines throughout the network, and 100-mm pipes elsewhere. The ability of the network to satisfy the hydraulic and water quality requirements was also demonstrated. It was shown that this will deliver a reduction of approximately 6% in lifecycle costs compared to keeping the existing pipe diameters, even if the predicted demand for water is varied by around ±10% from the forecast. This article has described technologies for regional operation, consolidation, and downsizing that can help put the water utilities on a sounder business footing through regional coordination and system-wide optimization of the water supply.

With the intention of helping customers add value, the technologies described in this article take the form of a digital solution for the water industry that is supplied together with the Internet of Things platform Lumada for solution development and easy customization.