Amid strong demand from mining companies to improve productivity, Hitachi Construction Machinery Co., Ltd. has developed an autonomous driving system for dump trucks that is able to operate continuously even in the difficult communication environments that prevail at mine sites, increasing the number of trucks able to be controlled by utilizing a permission control technique from the railway industry. This article describes the features of the system, its development process, and the progress of prototype trials at a test site in Australia. 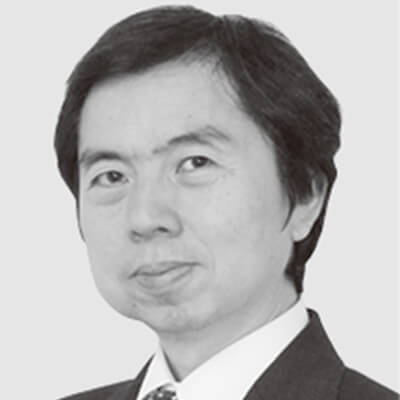 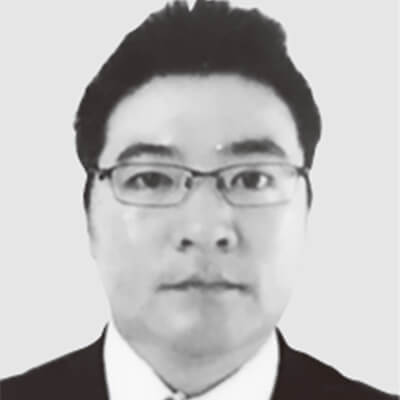 Commodity prices have remained low over the last few years in response to the ongoing economic downturn, leaving the mining industry facing an end to the era in which profits could be dug out of the ground, shifting instead to a time in which they must innovate to survive. Employee safety is also a challenge given that mines are inherently dangerous workplaces. This environment is requiring mining companies to improve efficiency and be rigorous about cutting production costs, including improvements to efficiency made by optimizing all aspects of their mine operations, not excluding improvements to mine safety, and further reductions in operating costs achieved through innovation. Autonomous haulage systems (AHSs) for the autonomous operation of dump trucks has attracted attention as one way to achieve these rationalizations.

Dump trucks are the largest use of labor at opencast mines. As shown in Figure 1, an AHS eliminates the need for a driver in these dump trucks, which are used for the hauling and dumping of ore and earth under the supervisory control of a central control system. Driverless dump trucks not only reduce labor costs, they also have the potential to provide economic benefits in the form of longer operating time (by eliminating the time spent on work breaks and shift changeover), and lower fuel consumption and longer machine life (by using machine control to drive the trucks in an efficient and appropriate manner). Use of machine control should also improve safety by reducing human error in the driving of dump trucks. There is also the potential to make overall mine operation more efficient by coordinating management of the hauling process with the production management system.

Driverless dump trucks use GNSS and sensors for autonomous driving. The central control system uses wireless communications with the dump trucks to perform operational management and traffic control for the entire vehicle. Excavators, bulldozers, graders, and other auxiliary machinery driven by human beings are also present at the mine site and need to coordinate operation with the driverless dump trucks.

Overview and Features of Hitachi’s AHS

To obtain benefit from AHS, it is desirable that it be used for as many dump trucks as possible because of the economies of scale that come into play at large mines with a large number of dump trucks. Unfortunately, the number of trucks able to be controlled is limited by the wireless communications capacity between the central control system and dump trucks. The constraints imposed by this volume of communications are particularly severe if control is based on obtaining the position of each truck in real time. In response, Hitachi Construction Machinery Co., Ltd. has adopted a permission control technique from the railway industry to minimize communications with the central control system and thereby enable control of a greater number of trucks.

On the other hand, because of the considerable investment and risk involved in switching an entire site from drivers to AHS all at once, what is needed is a way to perform this switch progressively. To achieve this, Hitachi Construction Machinery offers a system that can be retrofitted, providing a simple upgrade for converting driver-operated dump trucks to autonomous operation. This means that dump trucks purchased on the basis that they will be operated by drivers can in the future be converted to AHS at the customer site. The following sections provide details of the technology that underpins these features.

Figure 2 - Use of Permission Control to Manage Vehicle Movements 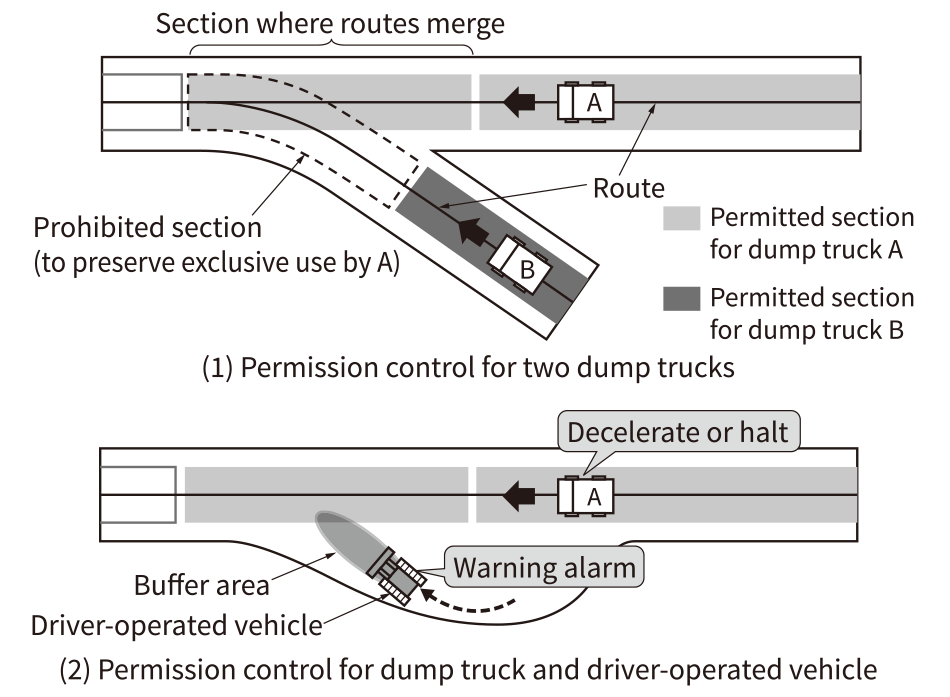 Vehicles are prevented from getting in each other's way by controlling their movements such that they have exclusive use of their permitted section.

Permission control prevents dump trucks getting in each other's way by dividing the route to be used by the trucks into sections and only permitting one truck at a time to drive on each section. Dump trucks are able to drive through their current permitted section without needing to communicate with the central control system. On approaching the end of the section, the truck sends a request for permission to enter the next section to the central control system, and, if permission is granted, continues on its way. In the example in Figure 2 (1), dump truck A already has permission to drive through the section where the routes merge. Accordingly, permission is not granted to dump truck B, thereby preventing their coming together.

This management by permitted sections is not used for vehicles operated by a driver because of the difficulty of specifying a predetermined route for such vehicles. Instead, the drivers are provided with guidance to warn them against entering sections for which a driverless dump truck has permission. Specifically, driver-operated and driverless vehicles are prevented from getting in each other's way both by using a terminal in driver-operated vehicles to display which sections have already been allocated to driverless dump trucks, and also by responding to situations in which the area in front of a driver-operated vehicle (buffer area) overlaps a section assigned to a driverless dump truck, as shown in Figure 2 (2), by displaying a warning and by having the central control system issue an instruction to slow or stop the dump truck.

The table lists estimates of how many vehicles can be controlled under given communication conditions. The calculation assumes a ratio of 1:2.5 between dump trucks and driver-operated vehicles.

Because permission control does not require the dump truck position to be obtained with high frequency, it reduces the communication overhead associated with sending position information to the central control system. Table 1 shows an estimate of how many vehicles can be controlled under given communication conditions using permission control and using a control technique based on vehicle position that requires frequent updates of position information. In this example, permission control can support approximately 1.7 times more vehicles than a control technique based on vehicle position.

The EH-3 series of mining dump trucks from Hitachi Construction Machinery feature vehicle stability control as well as alternating-current (AC) drive control with a high level of driving and handling performance(1). Because this maintains vehicle stability on slippery road surfaces or during sudden starts or decelerations, AHS conversion can be performed simply by installing an AHS add-on unit with an interface made up only of accelerator and steering inputs, thereby converting the dump truck from driver-operated to autonomous driving (see Figure 3). 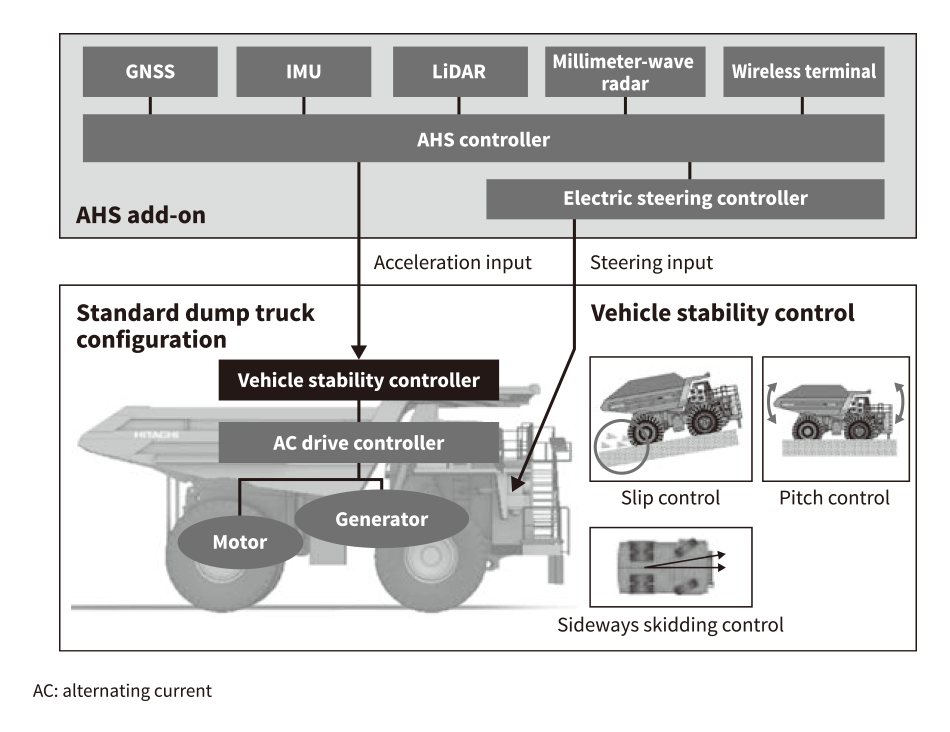 A driver-operated dump truck can be converted to autonomous driving simply by using the vehicle stability control provided by an onboard controller for this purpose.

Use of Hybrid Simulator in Development and Testing

While the development and testing of AHS technology requires a way to replicate the operations of loading, hauling, and dumping using dump trucks, it is not practical to set up a test environment with the 100 or so vehicles that would be found at a large mining operation. Instead Hitachi has performed development and testing using a hybrid simulator it set up as shown in Figure 4. 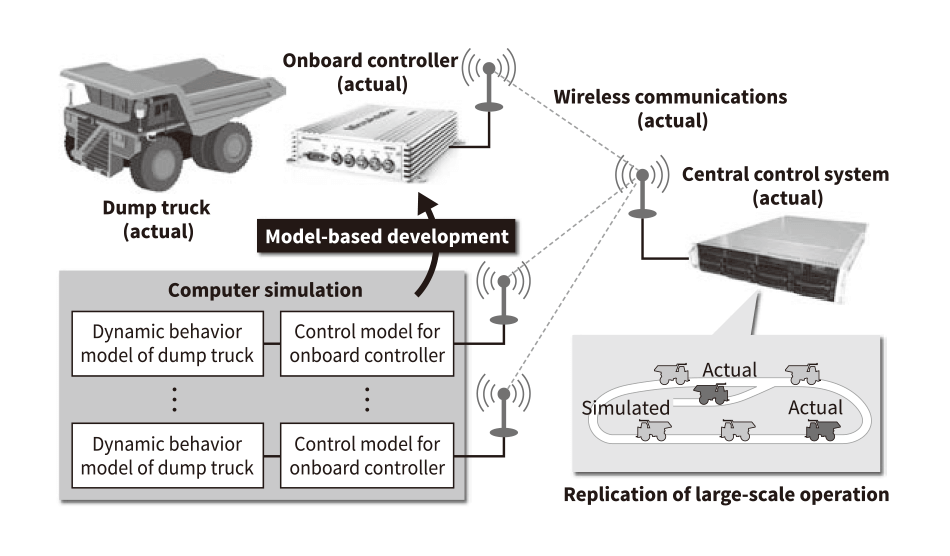 The simulator can replicate large-scale operations using a combination of actual and simulated virtual dump trucks.

The hybrid simulator uses an actual traffic control server and wireless communications units for passing commands from traffic control to the dump trucks, together with a mix of actual vehicles and simulators for the dump truck part of the simulation. The control logic in the onboard controller is produced using a model-based development method whereby the control model is developed on the simulator and then ported to the controller directly.

Hitachi has established a test site in collaboration with Stanwell Corporation Limited, an Australian power company, at the company's Meandu coal mine located approximately 100km inland from Brisbane in eastern Australia. The test site has one loading area and three dumping areas. The dumping areas accommodate over-edge dumping, paddock dumping, and crusher dumping setup (see Figure 5). A hybrid simulator like that described above was then configured at the test site using a central control system, dump truck simulator, and three actual dump trucks. The dump trucks were EH5000AC-3 models upgraded for autonomous driving and a EX3500 excavator was used for loading earth.

The test site has already been used to demonstrate the ability to perform the sequence of mine site operations associated with loading, hauling, and dumping, including testing the permission control function using a number of actual and virtual dump trucks together with dump truck path tracking, spotting, and dumping functions, and a function for specifying where excavator loading is to be performed and automatically generating the route to get there (see Figure 6). 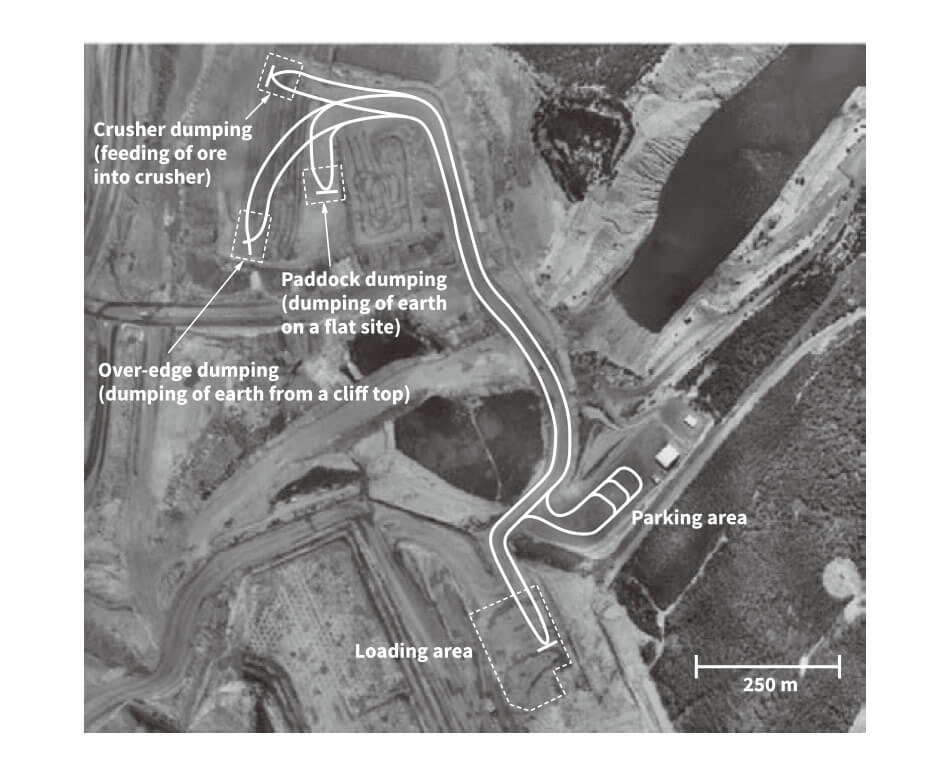 The test site has one loading and three dumping areas for replicating the sequence of mine site operations associated with loading, hauling, and dumping. 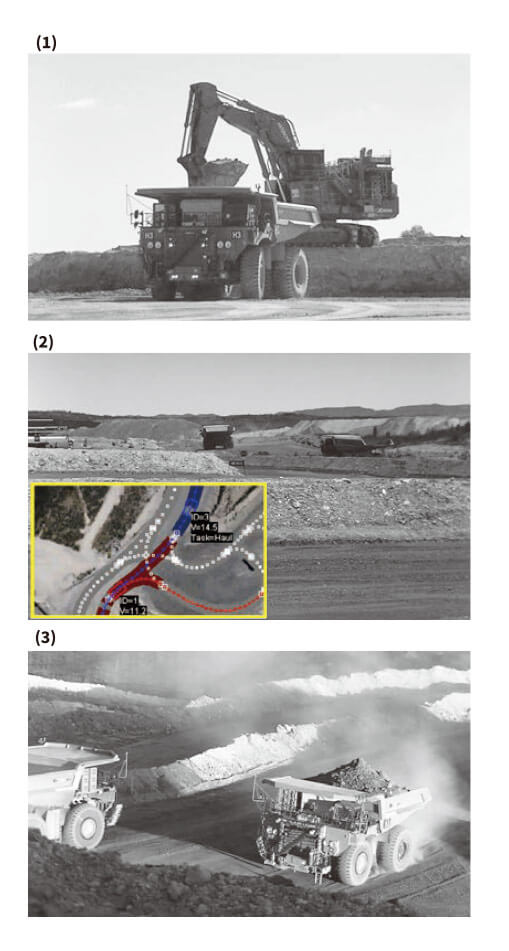 The development of the AHS described in this article is conducted through the cooperative work of three centers, including Hitachi Construction Machinery Australia Pty., Ltd., which is responsible for running the test site, and Wenco International Mining Systems Ltd. in Canada, which is responsible in particular for the fleet management parts of the central control system(2), (3). Meanwhile, the development of specific technologies utilizes technologies from Hitachi, Ltd. and other Hitachi Group companies. In the future, owing to the total range of Hitachi's capabilities, Hitachi Construction Machinery intends to draw on its comprehensive capabilities to develop its customer solutions business based around AHS.