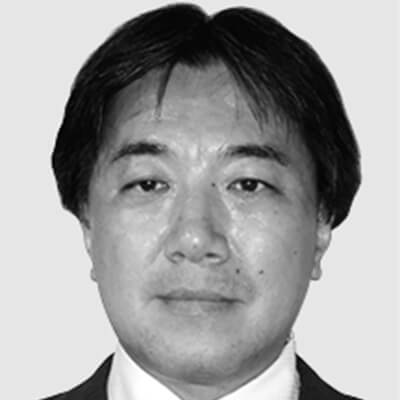 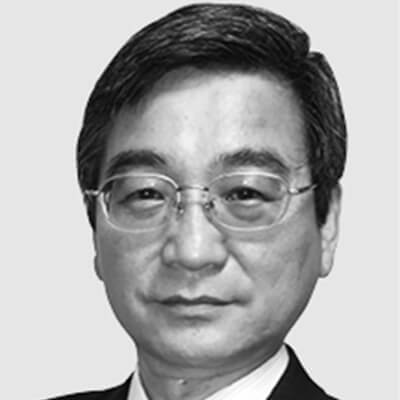 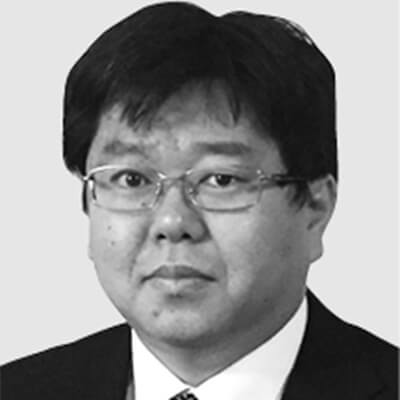 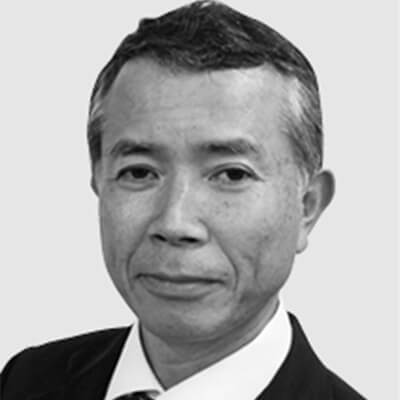 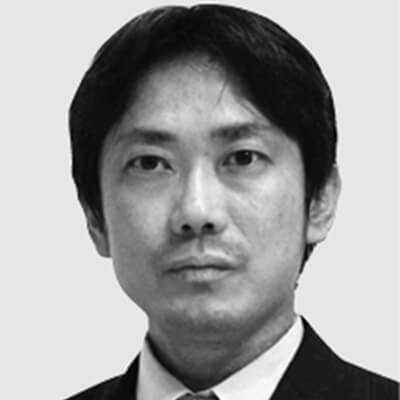 Vehicles, industrial infrastructure, and electronics are the three mainstay product fields of Hitachi Metals, Ltd. Vehicles are the main focus, accounting for about 50% of sales. Traditionally, the major products in this area have been metal components and various cast components for internal combustion engines, such as piston rings, continuously variable transmissions (CVTs), and belts. However, the company also develops metal part products for the core components of electric powertrains such as motors, inverters, and batteries, and is developing products for next-generation vehicles such as hybrid electric vehicles (HEVs) and electric vehicles (EVs), which are expected to grow in popularity.

This article looks at some specific examples of the work Hitachi Metals is doing on materials technologies. Its neodymium-iron-boron (Nd-Fe-B) magnets can be produced with low quantities of the rare-earth element, dysprosium, to reduce resource risks. Its rectangular enameled wires consist of a high-performance pure copper conductor covered with a heat-resistant material that has a low dielectric constant. These wires are designed to improve motor reliability, reduce size, and increase efficiency. Its clad materials for lithium-ion rechargeable batteries are designed for next-generation high-capacity batteries, and combine high strength with low electrical resistivity.

Nd-Fe-B magnets are attracting interest as models that enable smaller and more efficient motors. They are in widespread use for applications such as HEVs/EVs, electric power steering, factory automation, and energy-saving appliances. As demand for Nd-Fe-B magnets is expected to grow, reducing the resource risks for the rare-earth elements they require is the most pressing issue. For applications exposed to high-temperature environments, heavy rare-earth elements with high supply risk (mainly dysprosium) are used to ensure heat resistance, so producers are very keen to find ways of reducing the quantities used.

Hitachi Metals has succeeded in greatly reducing the quantity of dysprosium used in Nd-Fe-B magnets by studying the grain boundary phase that significantly affects the improvement of coercivity, exploring previously unstudied composition regions and additional chemical elements, and adapting the manufacturing conditions, etc. Magnets using our low-dysprosium technology were released as the NEOMAX Low Dy Series in April 2014 (models NMX-46F to 37F). A high-performance grade was released in 2015 also (models NMX-S49F to S38F). These models have the same residual magnetic flux density (Br) and coercivity (HcJ) as the conventional NEOMAX Standard Series, while enabling a reduction in dysprosium of about 2 percentage points by mass (hereinafter, mass%). For example, dysprosium-free model S49F can provide the same characteristics as the conventional high-performance grade model, S49CH, containing about 2 mass% dysprosium. By succeeding in refining its low-dysprosium technology in 2017, Hitachi Metals has expanded its lineup with the release of the NEOMAX F Series, including a dysprosium-free model (S49FH) with characteristics exceeding the previous highest performer (see Figure 1 and Figure 2).

The company plans to continue expanding its lineup of high-performance magnets that use smaller quantities of heavy rare-earth elements.

Shown here are the room-temperature demagnetization curves for models S49F to S38F in the NEOMAX F Series (Low Dy Series) of high-performance magnets. This diagram shows the characteristics of standard models 46F to 37F and high-performance models S49F to S38F. S49FH was developed in April 2017 to upgrade the coercivity of model S49F.

High-voltage inverter control is needed to make HEV and EV drive motors smaller and more efficient. When controlling the inverter, surge voltage is generated by the reflection of the drive signal in the rising and falling parts of the control voltage waveform. When the surge voltage is less than the partial discharge inception voltage (PDIV), no partial discharge occurs in the enameled wire used in the motor coil and insulation is not broken. But when voltage exceeding the PDIV is applied between wires, a partial discharge may occur and lead to insulation destruction (see Figure 3). Creating thicker films with lower dielectric constants while increasing PDIV is effective for suppressing partial discharges.

Drive motor enameled wire may be bent after elongation and used in high-temperature environments, creating demand for a type with higher reliability, workability, and heat resistance than the polyamideimide wire used in ordinary motors in the past.

Hitachi Metals has responded to this need by developing a heat-resistant material with a low dielectric constant, and given it a low dielectric constant with a novel chemical structure to reduce polarity. The company has released high-PDIV rectangular enameled wires covered in this material that it has started to provide for use in HEV/EV drive motors (see Figure 4). 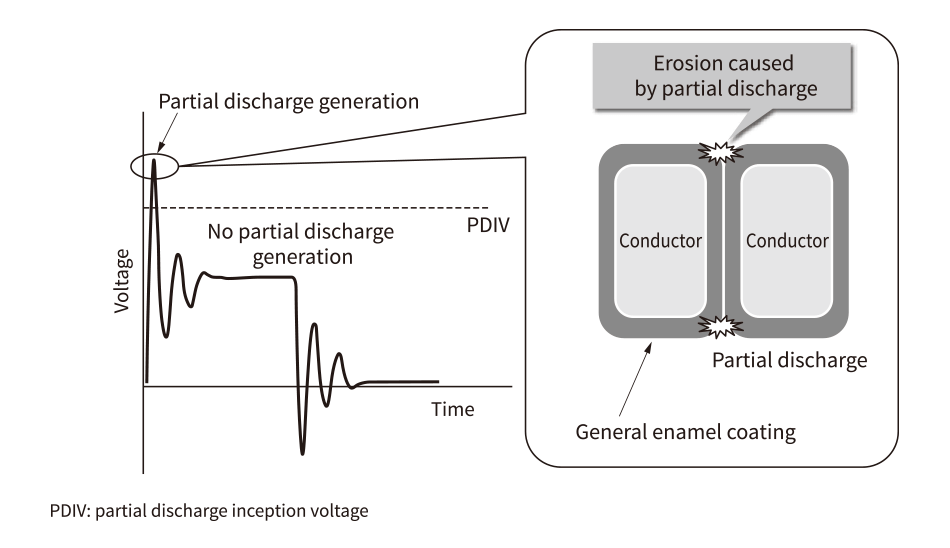 When a voltage exceeding the PDIV is applied between enameled wires during inverter control, a partial discharge is generated that erodes the film and leads to break down. 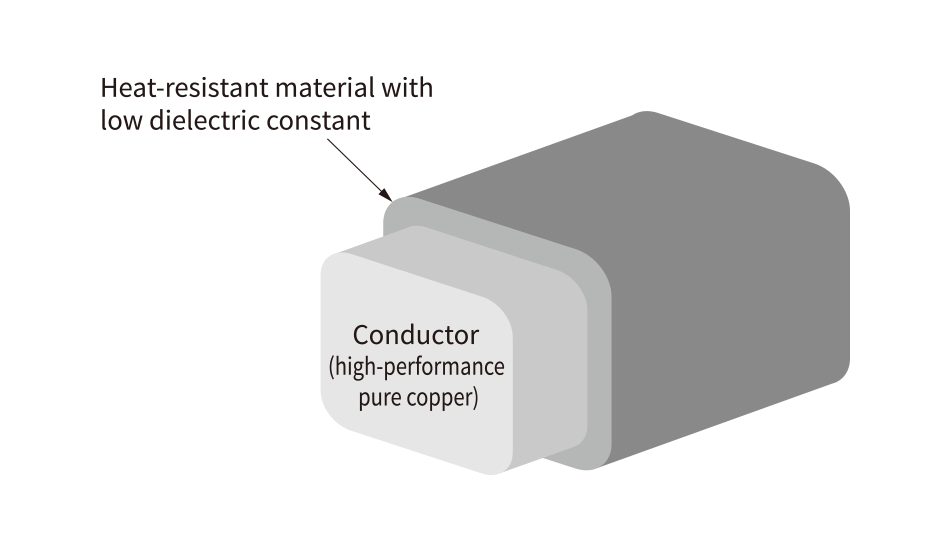 The structure consists of a rectangular conductor surrounded by a heat-resistant covering with a low dielectric constant. The conductors are made mainly of copper components such as high-performance pure copper.

The use of high-performance pure copper material in the wire conductors should provide outstanding flexibility and stable tungsten inert gas (TIG) weldability. High-performance pure copper is a material made by adding a trace amount of titanium to molten electrolytic copper to capture the sulfur and oxygen impurities in the copper and increase the purity of the copper base metal. Continuous casting and rolling machines with low energy consumption and outstanding productivity enable manufacturing consistency down to the finished copper wire.

Capturing of impurities first occurs in the molten copper. Titanium is then added to the deoxygenated molten copper, and reacts with oxygen and sulfur to form trace amounts of compounds (see Figure 5). The result is then cast and hot-rolled to precipitate out the sulfur still remaining in the copper and increase the purity of the copper base metal.

These interactions give high-performance pure copper characteristics resembling high-purity copper (6N). It has conductivity of at least 101% of the International Annealed Copper Standard (IACS), and its half-softening temperature (a softening characteristic indicator) of 130°C rivals that of high-purity copper (6N). It also has outstanding TIG weldability and does not cause hydrogen embrittlement.

A wide range of applications in product areas such as HEV/EV motor windings and cable products is expected. The oxygen and sulfur impurities in the copper are trapped as compounds by adding titanium, increasing the purity of the copper base metal. 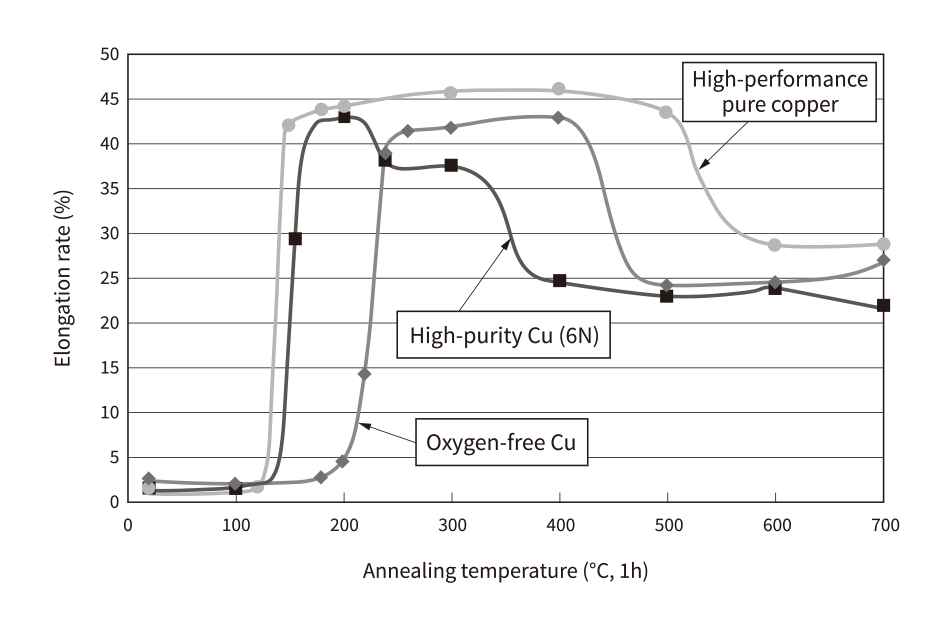 Shown here are elongation rates after annealing for one hour at different temperatures. High-performance pure copper provides greater elongation than other copper materials at a wide range of annealing temperatures.

Table 1 shows example product characteristics. The film used in this product has a lower dielectric constant than polyamideimide wire, enabling a 13% increase in PDIV. The film thickness has also been increased (previously difficult for enameled wire), increasing PDIV by 1,450 Vp (46%) for a film thickness of 100 μm (Hitachi Metals figures).

Flexibility has been greatly improved over polyamideimide wire, with no film cracks even under 1d bending conditions (a winding diameter equal to the wire diameter) during edgewise bend testing after 30% elongation. This flexibility improvement provides resistance to harsh processing and helps enable smaller motors.

The wires are highly heat-resistant, with a high temperature index (240°C) and high cut-through temperature (at least 500°C). After thermal degradation in a 240°C atmosphere, the break down voltage exhibited a high retention rate after 1,000 hours of heating, demonstrating outstanding heat resistance (see Figure 7).

These products are high-PDIV rectangular enameled wires containing a rectangular conductor that takes up a high space factor of coil and helps improve performance. They are covered with a heat-resistant material that has a low dielectric constant. They help improve motor reliability and should help make smaller and more efficient motors possible. After thermal degradation of high-PDIV rectangular enameled wire in a 240°C atmosphere, the break down voltage remained high after 1,000 hours of heating, having high thermal resistance.

With regard to the aim of giving liquid-electrolyte lithium-ion batteries high-capacity in the next generation, researchers are actively studying ways of replacing the graphite conventionally used in the negative-electrode active material of these batteries with high-capacity silicon materials. All-solid-state batteries that use solid electrolytes are also being developed as a way to enable more compact battery packages and higher capacities. Hitachi Metals Neomaterial, Ltd. has developed current-collecting clad foils for both types of high-capacity batteries, and is now evaluating their performance in the market.

One of the foils is a current-collecting clad foil designed for the silicon negative electrodes of liquid-electrolyte lithium-ion batteries. Silicon negative electrodes expand and contract greatly in volume when charging and discharging, and impose high stress on the current-collecting foil. Stronger current-collecting foils with lower electrical resistivity than the conventional type are therefore needed. Figure 8 shows the development concept and material composition of the clad material that have been developed to meet this need. The material has a three-layer clad configuration. The core material is a nickel-niobium (Ni-Nb) alloy with high strength and outstanding rolling workability, while the surface layer material is pure copper with low electrical resistivity, enabling a combination of target characteristics.

Figure 9 and Figure 10 show the effect of adding niobium (an effective strengthening element) to nickel, and characteristics of clad material using this Ni-Nb alloy as the core material. The rolling reduction of each material is 80% in these results. They show that the target values can be achieved by adding about 5% niobium. Table 2 shows the characteristics of the clad material developed in comparison to a conventional current-collecting foil. As shown, the new foil is stronger than the conventional foil while reducing electrical resistivity to below the target value. The foil's performance when used in batteries is being evaluated currently by a public research facility and battery manufacturer. The foil has demonstrated favorable characteristics.

To create a current-collecting clad foil for use in all-solid-state batteries, Hitachi Metals Neomaterial has also developed a two-layer clad foil (aluminum-copper) that can support bipolar electrode structures, and is now evaluating it in batteries.

Figure 9 - Effect of Nb on Ni Tensile Strength: Characteristic after Cladding with Cu. 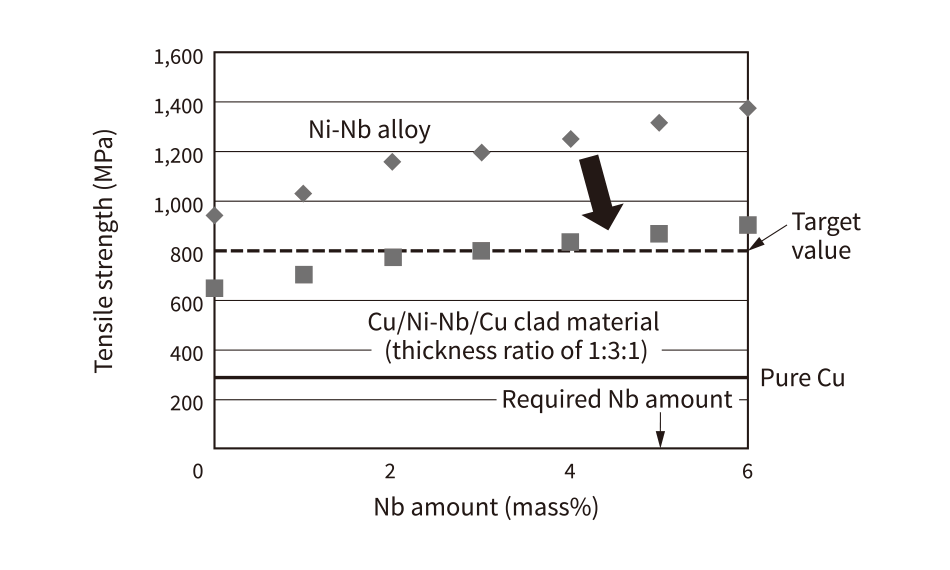 The nickel-niobium alloy required the addition of at least 4% niobium to achieve the target tensile strength after cladding.

Figure 10 - Effect of Nb on Ni Electrical Resistivity: Characteristic after Cladding with Cu. 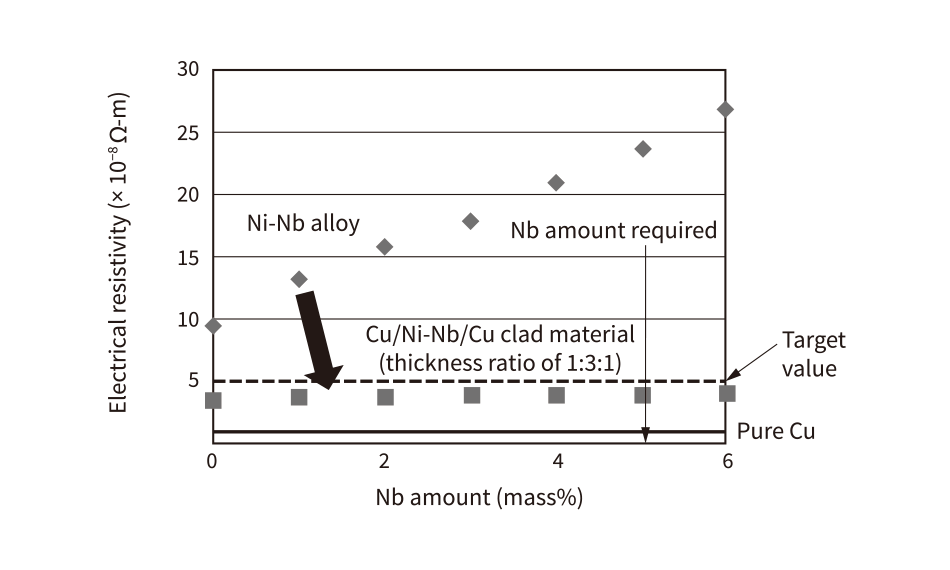 Cladding with pure Cu was required to achieve the target electrical resistivity.

To present some of the products being created by Hitachi Metals for electric vehicles, this article has examined the company's work on developing magnets, windings, and battery materials.

The growth of electric vehicles is expected to continue gaining momentum in the coming years, and requires the development of new materials to further enhance performance. Meeting environmental demands will require more than just a switch to electric vehicles. Developing new materials and parts to improve internal combustion engine efficiency and reduce vehicle weight will also be crucial. Together with the rest of the Hitachi Group, Hitachi Metals will continue working on next-generation material technologies designed to help protect the global environment.