1. The Architecture of IoT Platform Lumada

The rise of information technology (IT) has led to a high level of interest in the Internet of Things (IoT) because of its ability to utilize information collected from various devices connected to networks. Companies can use IoT systems to combine information they have with various types of information newly obtained from devices, expanding the possibilities of business transformation. This is why business entrepreneurs are focusing on the IoT.

IoT systems require connectivity with a variety of devices, but many different types of communication protocols are used depending on the device; unifying them into one specific protocol is difficult. Connecting devices with these diverse communication protocols is thus becoming an issue. Companies that are adopting the IoT have to proceed by trial and error to find out how the IoT can trigger innovation for their business, giving rise to the need to create prototypes in short periods of time and at low cost. IoT systems also often handle information that is a source of competitive strength for a company, and many companies are reluctant to allow data on these production systems to be taken outside the company.

Hitachi provides the Lumada IoT platform with a set of common functions for rapid and effective development of IoT systems. It classifies the common functions that are essential for the IoT into five function groups called Edge, Core, Analytics, Studio, and Foundry (see Figure 1.1).

“Edge” refers to a group of functions that relay device data to IT systems. This is normally implemented near the devices in the form of a IoT gateway. It also includes data processing (data filtering and analysis) on the IoT gateway.

“Analytics” refers to a group of functions used for analyzing collected data. In addition to analysis functions including artificial intelligence (AI), it contains functions that generate data sets suitable for analysis by combining information from devices and various types of IT systems.

“Studio” refers to a group of functions relating to user interfaces for end users and developers, such as application dashboards and application development environments.

Lumada provides common functions based on the two concepts of “composable” and “portable.”

“Composable” means the ability to configure IoT systems that combine functions suited to customer needs. An example on the OT data collection platform (which collects data from devices) would be the ability to use PTC Inc.'s* ThingWorx* and Axeda*, or the MQTT protocol in addition to communications systems supported by the Hitachi, in order to widen the range of connectible devices. For other function groups also, components can be selected as needed from several options (see Figure 1.2).

“Portable” means that the system can be built on the cloud or on-premise. Hitachi provides Lumada on-premises to accommodate the need for on-premises operation of IoT systems developed in the cloud during the proof of concept (PoC) phase.

And, in order to meet the needs of users for agile implementation of IoT systems during PoC, Hitachi provides a Node-RED-based application development environment as one of the Studio functions. This function allows program development by connecting function blocks using a graphical user interface (see Figure 1.3).

In this way, Hitachi can co-create IoT systems that inspire business innovation by easily combining various functions supplied as IoT platform Lumada through trial and error together with customers.

1.1. The architecture of Lumada 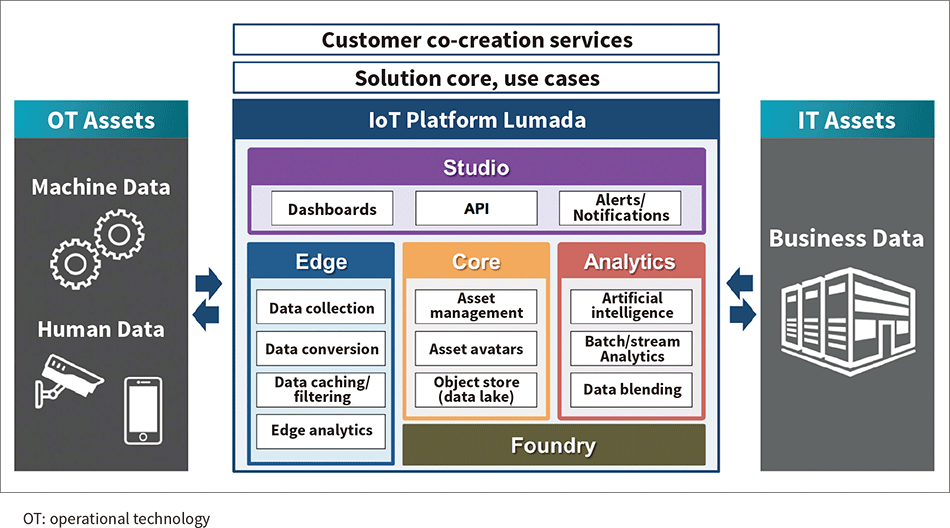 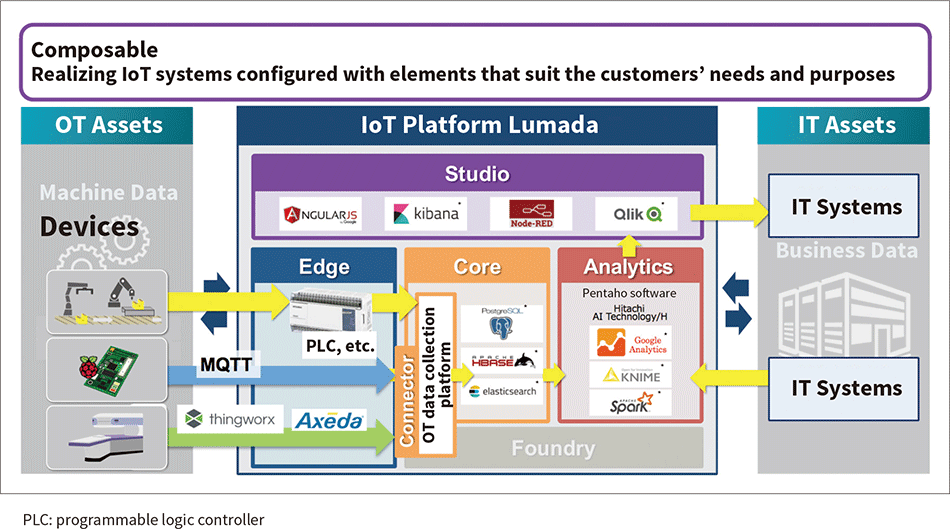 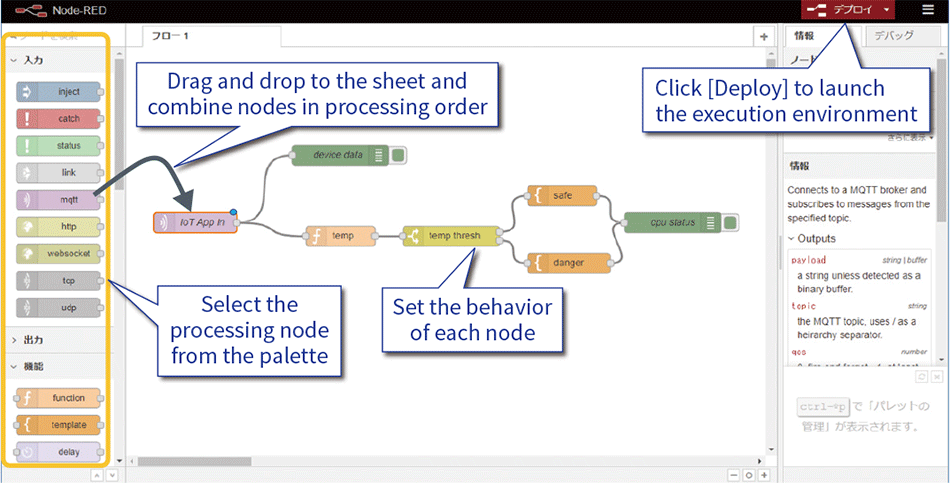 In IoT system developing, creating new value through repeated hypothesis testing requires a different approach than traditional system development where development only starts once the requirements are clearly delineated. There are several challenges that need to be faced when using the IoT, such as the vast amount of time required to process the big data it generates, handling new types of data after introduction of the system, and tracking the data increase.

Given this situation, in September 2017, Hitachi added a common IoT framework as a new function in its distributed processing-based application execution control platform, the Hitachi Application Framework/Event Driven Computing (HAF/EDC). This framework can predefine the data processing models commonly required in the IoT in terms of storage, analysis, and reference processes, to effectively process data in accordance with those standard procedures. Systems can be designed and developed in a short space of time with highly effective hypothesis testing, helping to create high-added-value services utilizing the customer's IoT. 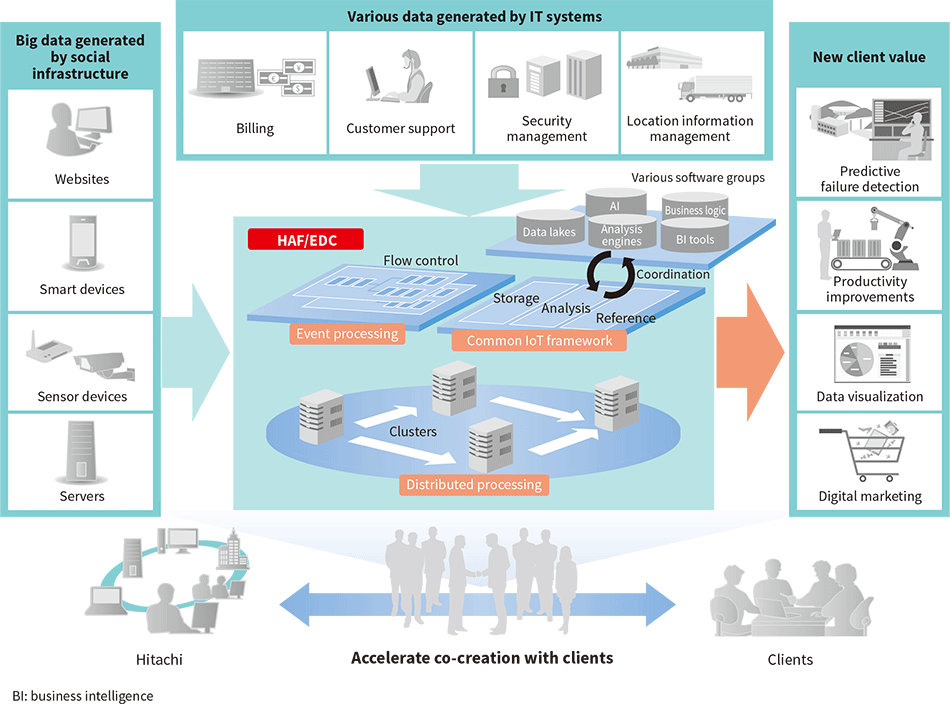 The Edge and Core functions in Lumada's architecture are handled by an OT data visualization platform.

This platform collects data from various field assets and normalizes data for real-time visualization and analysis. It is a publish/subscribe message distribution platform that is based on the open Lumada concept. It has a loose-coupled architecture and includes a variety of open source software (OSS).

This platform is provided as a solution for the manufacturing industry and aims to expand its applications further, to plants, urban, logistic, healthcare, and so on. 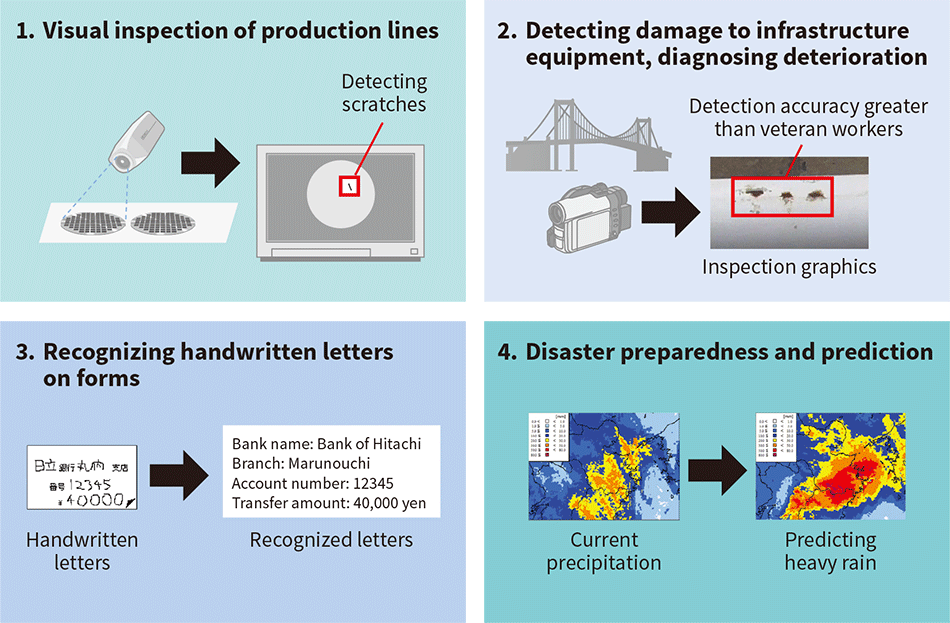 Behind the rapid advance and spread of AI lies the research and practical implementation of deep learning. Hitachi has already built up a track record of incorporating deep learning in various analytical technologies, but there is increasing demand for a wider scope of recognition and automation.

Deep learning is expected to improve productivity by replacing simple work performed by hand and achieving recognition rates higher than humans can, and to be applied to fields that up to now were difficult to model. Yet the black box of deep learning still faces challenges like guaranteeing the results of judgments and the difficulty of explaining how it works. Hitachi is working to overcome these challenges, to develop deep learning technology that will be easier to use and more reliable. 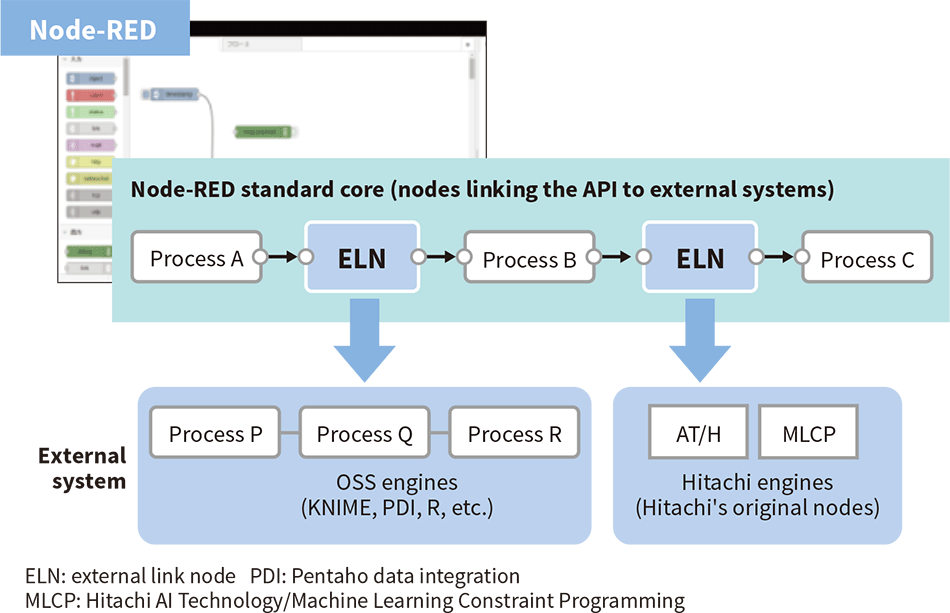 This process of combination requires trial and error between the customer and Hitachi.

In Lumada, the Studio function group acts as the control tower. It assembles the overall processing using the Edge and Analytics function groups to provide a development/execution environment that renders value (data) visible. To make this possible, Hitachi extended the GUI-based OSS, Node-RED, used to build applications without coding was extended in Studio, and enhanced the application programming interface (API) functions for linking to external systems and services and the team development functions.

The entire Hitachi Group is working to expand its original nodes and reusable solutions to help rapidly provide value.

These days, companies are expected to generate new, previously unrealizable value by transforming their business and operations using digital technologies and digitalized information. Platforms that can rapidly develop applications through repeated trial and error in a short period of time are essential to achieve this.

*1
A software development method coined by combining the words “Development” and “Operations.” DevOps entails a close link between development and operation in developing new functions required by operations.
*2
See the list of “Trademarks.”.

The workplace environment is rapidly becoming more complex for many reasons: the rapidly changing business environment, advancements in robotics and AI technology, diversifying types of employment, different views on the company and work, and greater awareness of work-style innovations to limit long working hours. Managers and administrators not only need to maintain and expand business performance, but also need to consider how to improve employee motivation and satisfaction. Yet differences in organizational attributes and effective methods for managing different staff members make it difficult to manage teams as they should be managed.

Hitachi's organizational-reform solution service uses wearable sensors to measure and visualize the behavioral data of employees. It also calculates an organizational happiness index, a marker of the level of activity of an organization, to determine the status of the workplace. Hitachi AI Technology/H analyzes these workplace data along with data on business operations, to propose measures for improving the activity level of each individual organization. This helps to raise organizational performance and to promote workplaces where employees work actively and with enjoyment.

7. Outline of the organizational-reform solution service

In recent years, the declining labor population is becoming an issue. The lack of experts is a particularly serious problem. AI and other new technologies are expected to help with skills-transfer and to improve work efficiency.

Hitachi's plan optimization service systematizes the planning work that previously only well-experienced experts could do. This reduces the burden of planning work and minimizes the operational continuity risk and knowledge transfer risk, while also accelerating and enhancing the quality of planning work.

The main features of this service are as follows.

Hitachi will continue digitalizing the knowledge of experts by combining these key features. 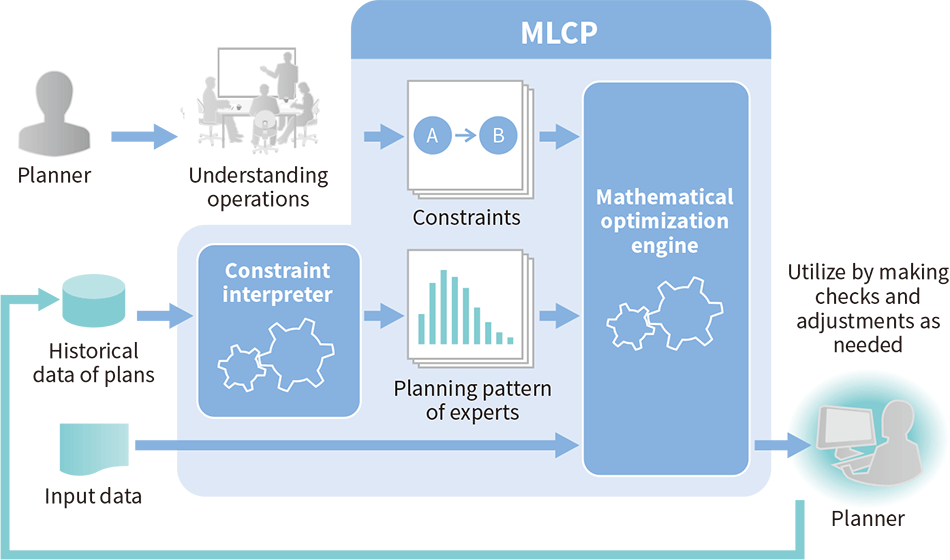 The Lumada Competency Center (CC) is a service that provides a system verification environment to speed up prototyping and hypothesis testing for data utilization. This accelerates business based on collaborative creation between the customers and the Hitachi Group.

The service began as a cloud-based collaborative creation environment for digital solutions on October 25, 2016.

By providing Pentaho, a big data analytics program at the core of Hitachi's Lumada IoT platform, the DevOps PoC environment provisioning service supporting agile development*, as well as consulting and other services using Hitachi AI Technology/H, Hitachi is supporting the rapid launch of the system environments required for PoC after establishing hypotheses.

In addition to this, Hitachi showcases via demonstrations in the cloud environment cutting-edge examples achieved in many business fields by the group and its customers inside and outside the company, supporting the collaborative creation of digital solutions with customers.

*
In software engineering, a group of lightweight development techniques for rapid and adaptive software development.