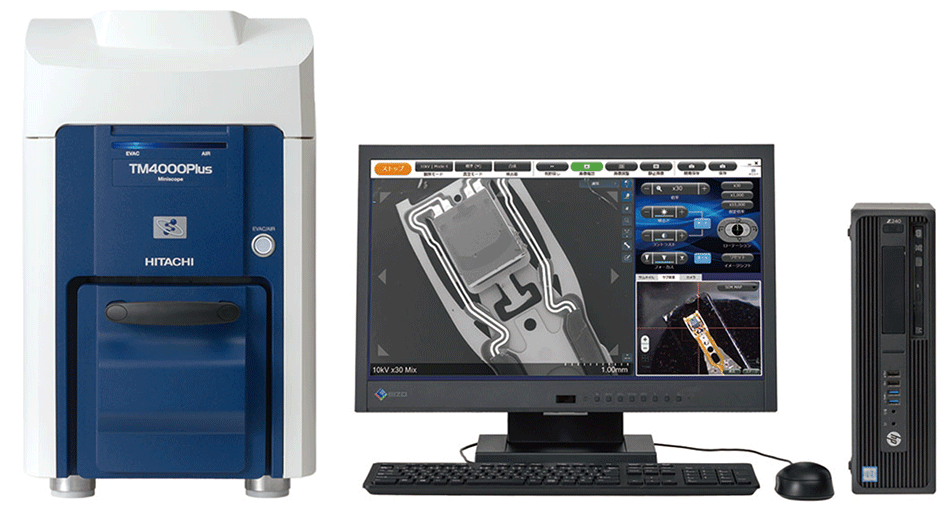 The tabletop microscope known as Miniscope is a scanning electron microscope (SEM), an instrument used in various fields including materials science and life science, that has been miniaturized to a size that can fit on a tabletop. Its widespread use is not only limited to research labs, but also extends to factory sites for managing production processes and quality control. The expanding user base and diversification of applications have generated a requirement to make the microscope easy to use with high throughput by any user. The latest models, the TM4000 and TM4000 Plus, streamline and simplify the entire process from sample observation to elemental analysis and analytical report generation. Utilizing an optical camera installed inside the sample chamber can capture samples during the vacuum pumping process to allow easy searching of an area of interest. Both models provide a reports creation function which makes reports from the captured SEM images in Microsoft* Word*, Excel*, or PowerPoint* format. The size and weight are still less than previous models even when the optional optical camera and motor drive are installed, allowing them to be used in even more locations and applications. 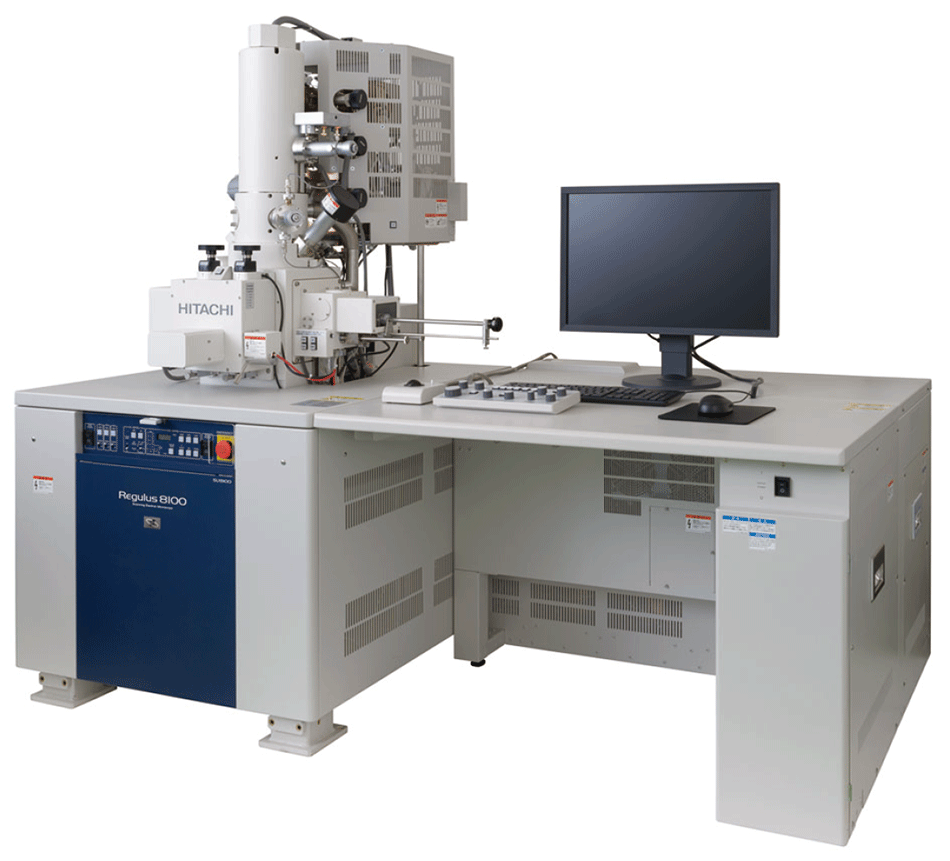 SEMs are used to observe material structures in a diverse range of fields, including nanotechnology, semiconductors and electronics, biology, and materials science. In recent years, state of the art science and technology around the world has been supported by advances in research into graphene and other new carbon materials expected to be applied to next-generation electronic devices, as well as polymeric materials and composite materials. SEMs used in the observation and evaluation of these materials must have low-accelerating-voltage imaging and high-sensitivity elemental-analysis capabilities for ultra-surface analysis as well as ultra-high-resolution imaging capability. Moreover, SEMs must be able to consistently and reliably perform these functions. With optimized electron optical systems, the new Regulus series has increased resolution performance to 0.9 nm in the Regulus8220/8230/8240 models and 1.1 nm in the Regulus8100 model—an improvement of roughly 20% in resolution at 1 kV landing voltage compared with previous models. The Regulus series employs a novel cold-field-emission (CFE) gun optimized for high-resolution imaging at low accelerating voltages. This CFE gun makes it possible to observe high-resolution images of up to 2 million times* compared with 1 million times in previous models. User-support functions have also been enhanced so that the advanced performance of the series can be fully leveraged, including functions to assist the operation of the signal detection system for analyzing various types of materials, as well as device-maintenance functions.

*
In comparison with the previous SU8200 Series and SU8010 (research by Hitachi High-Technologies Corporation). 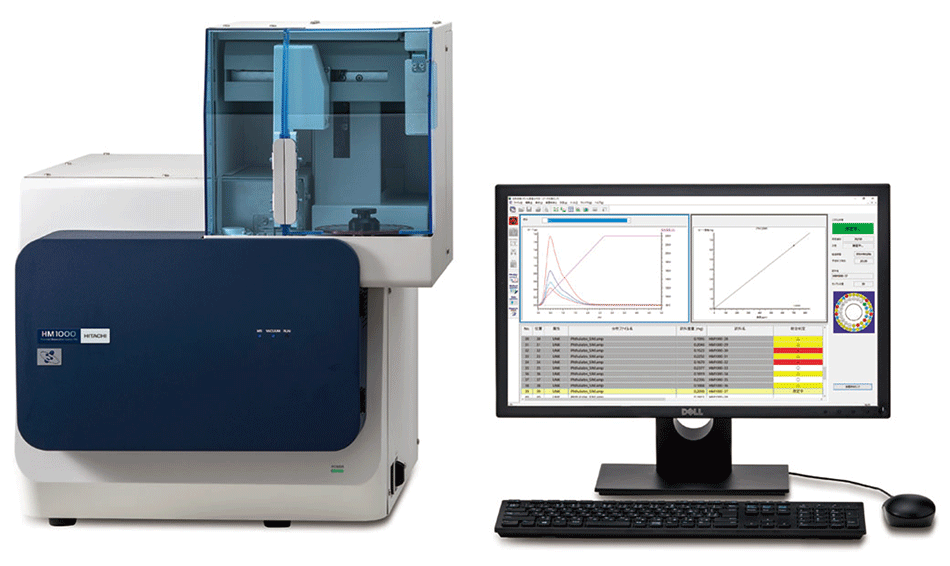 Due to revision of the European Union (EU)'s Restriction of Hazardous Substances (RoHS) Directive, after July 2019 four types of phthalate esters will be added to the restricted substances. The HM1000 thermal desorption mass spectrometer is specially designed as an instrument for screening phthalate esters.

Phthalate esters are widely used as a plasticizer in polyvinyl chloride products (e.g. wire sheaths, electrical insulation tape, and packaging films) due to its ability to give flexibility to plastics and rubber. To deal with the revision of the RoHS directive, manufacturers of electric and electronic components are starting to take measures to screen for phthalate esters contained in products and parts. But conventional screening methods have many drawbacks, including length of preprocessing time, the need for large quantities of solvents and expensive helium gas, and complicated instrument maintenance.

The HM1000 is comprised of a sample heating unit to gasify phthalate esters within samples, an ionizing unit to ionize the gasified phthalate esters, and a mass spectrometer to analyze the ionized constituent elements. By simply cutting a small sample (approximately 0.2 milligrams) and placing it in the sample pan, users can measure the amount of phthalate esters in ten minutes per sample. The auto-sampler can handle up to 50 samples consecutively (taking about 8 hours to do so), with dedicated software to automate detection, quantification, and confirmation of the presence or absence of phthalate esters from sample substances, facilitating a more efficient screening process at lower cost. 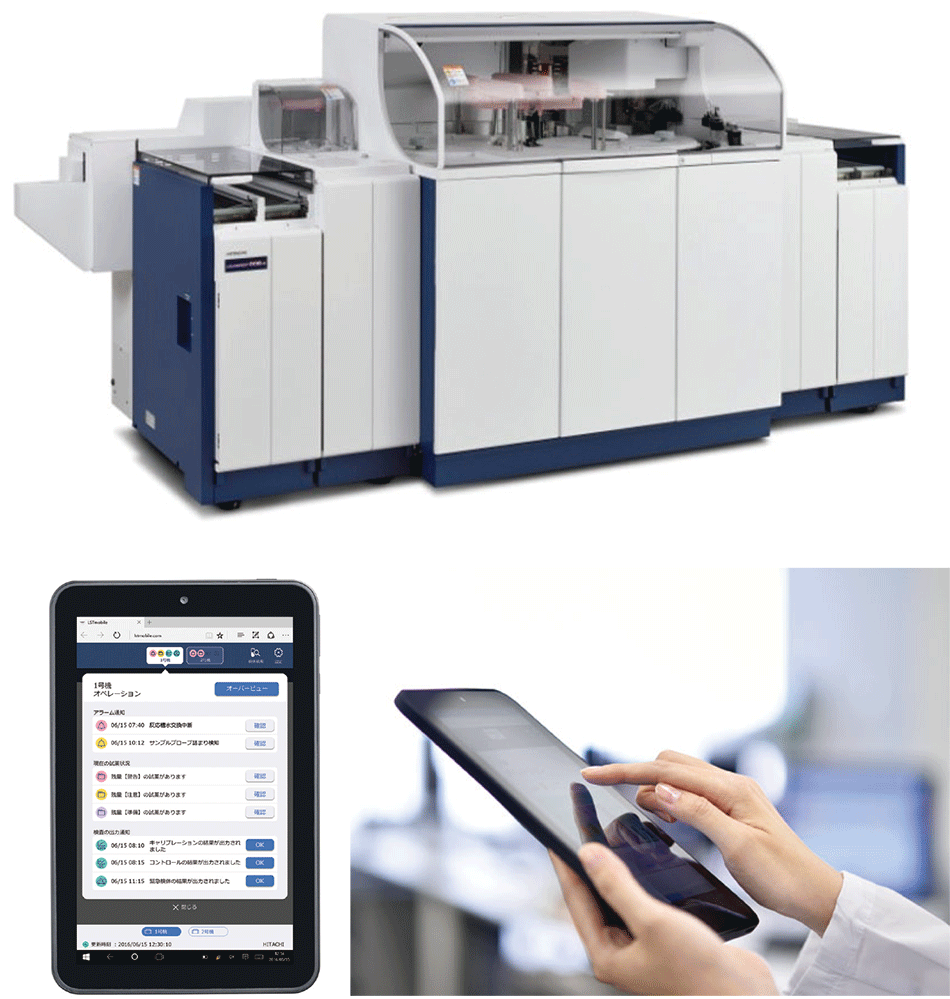 The conspicuous advances in clinical laboratory testing due to the sophistication of medical technology have led to a large number of tests being undertaken every day at hospitals and other medical institutions. Given this background, there is a strong need not only to speed up throughput and minimize reaction solution volume, but also to reduce the burden on operators via more efficient operation.

The LABOSPECT 008α, as the successor to the LABOSPECT 008, maintains the 008's key features, including a dedicated reagent / twin pipetting system and ultrasonic stirrer, while reducing the minimum reaction solution volume and revamping the design of the operation screen.

The LABOSPECT Mobile was also developed as a support system aimed at transforming the testing workflow. This support system makes it possible to confirm the testing status and any alarms for each instrument via mobile devices even if the user is in a distant location. By decreasing the number of times an operator has to access the instrument and streamlining worker movements, this model further increases work efficiency by reducing the burden on operators and making better use of time.