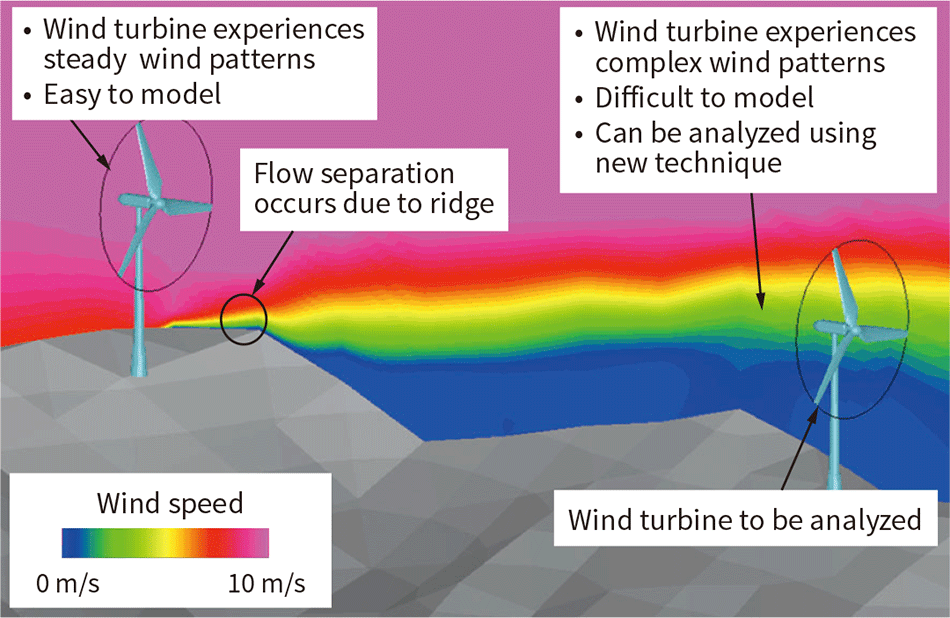 The installation of wind turbines for electric power generation is picking up pace in Europe, America, and Japan. In the case of Japan, the turbines are being installed in mountainous regions. Hitachi has commercialized downwind turbines that are suited to such locations and have blades on the downwind side of the tower.

There is a need, when installing wind turbines, to estimate their power output and make damage assessments. Past practice has been to do this using wind models that are based on flat terrain like that in Europe. It is difficult using these models to replicate the changes in wind conditions that occur in complex terrain, especially for mountainous regions like those found in Japan, with the problem being that parameters like power output and damage levels are different for each turbine. Accordingly, Hitachi has been working on wind turbine analysis software that uses blade element momentum theory to calculate wind loads and power outputs for the results of wind condition analysis that provide information on wind speeds and turbulence. This means that power outputs and damage calculations can be performed that take account of the changes in wind conditions due to the terrain. Compared to previous methods, this method incorporates the influence of terrain, giving higher power output. In the case of damage assessment, this method also makes it possible to evaluate changes in load that could not be considered by previous methods.

In the future, Hitachi plans to use this technique for engineering purposes when installing wind turbines. 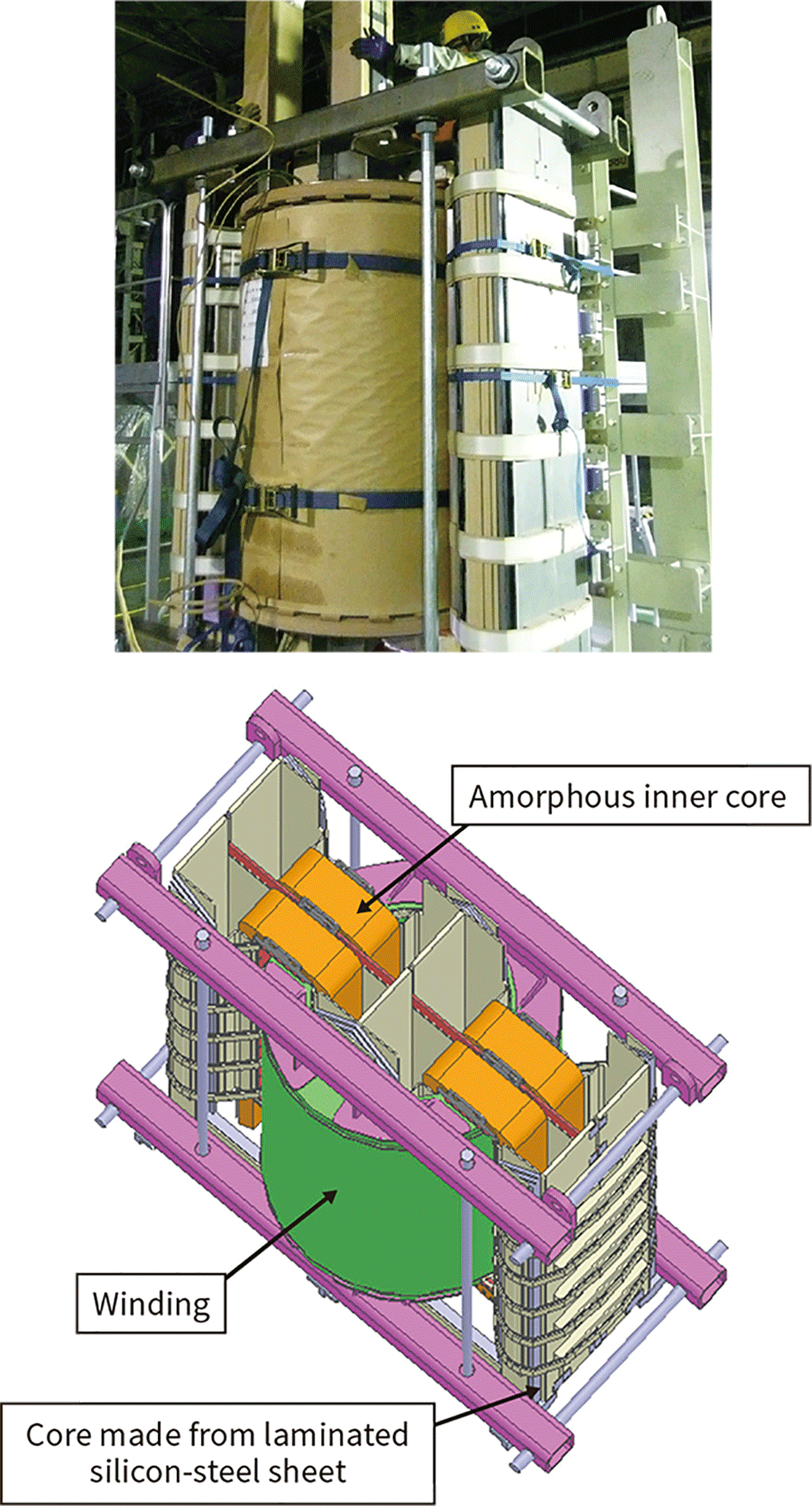 Amid rising demand for energy efficiency, Hitachi has commercialized amorphous transformers to provide highly efficient equipment for distribution-class electrical systems. A key feature of these transformers is that losses in the core (iron losses) are lower than those for transformers made from silicon-steel sheet.

To encourage the adoption of these transformers more widely in the general private-sector market, and as part of a Ministry of the Environment technology development and demonstration project encouraging stronger measures for reducing carbon dioxide (CO2) emissions, Hitachi has developed a large-capacity amorphous transformer with a capacity significantly higher than the 4 MVA that was previously the maximum. One of the challenges for increasing capacity was preventing increased iron loss. The increased iron loss was derived from the higher stresses caused by the increased weight of the larger core. Hitachi succeeded in keeping these stresses to a minimum by developing a split-core design in which the upper part of the core is suspended from a number of beams. This succeeded in increasing capacity without increasing iron loss, with the iron loss being 50% less than for a silicon-steel sheet transformer. As iron loss occurs continuously while a transformer is live, the new transformer is expected to provide significant energy savings.

In the future, Hitachi plans to achieve higher capacities and voltages and to market the transformers internationally.

Hitachi has developed a technology that analyzes operational data collected from mechanical systems using the Internet of Things (IoT) and uses the results for reliability design and for operations and maintenance.

The technology can improve reliability design by using operational data to determine things like a product's operating conditions, loads, and structural reliability. Furthermore, by using fault risk (the probability of a fault multiplied by its cost) as an indicator, reliability comparisons can be performed on the basis of cost. In this way, the technology can improve the reliability of the entire mechanical system, throughout its entire product lifecycle from design to operation and maintenance.

Hitachi operates an analytics platform that uses the IoT for the online collection of operational data from wind power generation systems and analyzes their fault risks. The intention is to continue using the analytics platform to make ongoing improvements in system reliability and to maximize customer revenues.

3. Overview of the online analytics platform 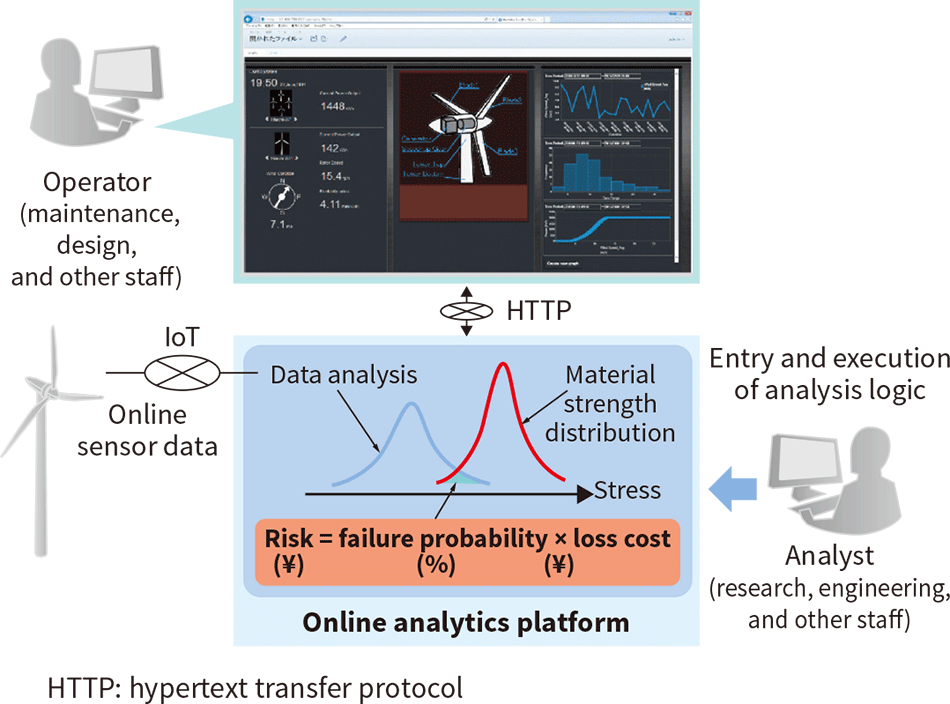 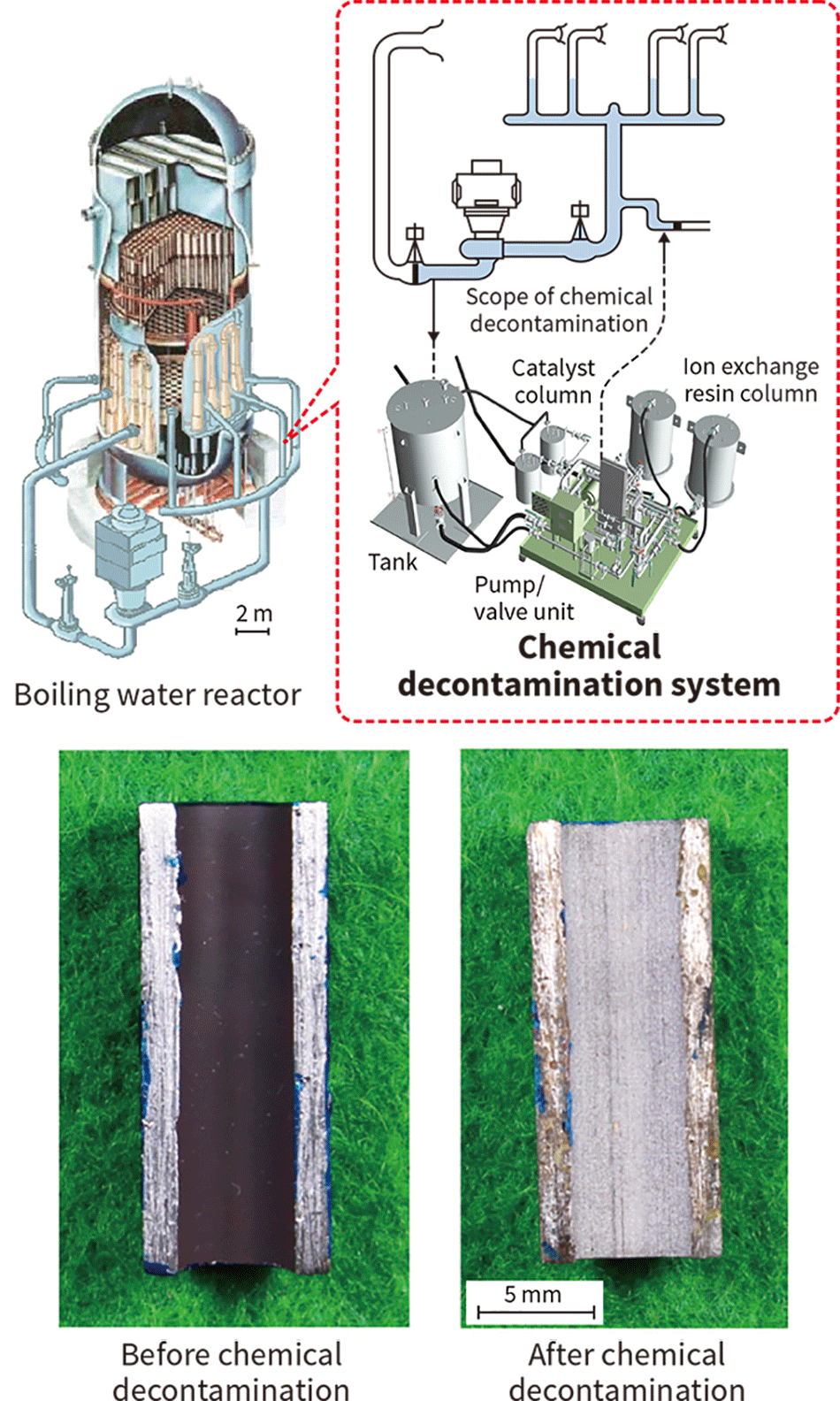 Decommissioning nuclear power plants that are no longer used for generating power involves the dismantling and removal of the radioactive material created during plant operation while keeping it under appropriate management. To reduce worker radiation exposure during decommissioning, Hitachi has developed a chemical decontamination technique that reduces the amount of waste left after decontamination by dissolving radioactive material that adheres to structures and piping in the reactor to remove it.

The technique can be used to dissolve radioactive material with high efficiency by choosing the right organic acid to suit the material from which the parts to be decontaminated are made. While the organic acid used for decontamination itself becomes a form of radioactive waste, using a catalyst to break the organic acid down into carbon dioxide, nitrogen, and water can reduces the volume of waste by a factor of more than 10 compared to the volume without this decomposition.

Hitachi intends to use the chemical decontamination technique to reduce worker exposure to radiation and support safe decommissioning.

Low-temperature waste heat under 100°C from factories and power stations goes underutilized due to the limited suitable uses for it. In the case of absorption chillers that use waste heat for cooling, the lower limit for the outlet temperature from the heat source is around 75°C, making it difficult to find uses for waste heat at temperatures lower than this.

In part of the research and development project, Thermal Management Materials and Technology Research Association (TherMAT), commissioned by the New Energy and Industrial Technology Development Organization (NEDO), Hitachi has developed a single-effect double-lift absorption chiller that can recover waste heat from water at a temperature as low as 51°C and use it for cooling. The chiller combines a newly developed double-lift cycle that can utilize low-temperature waste heat with a conventional single-effect absorption refrigeration cycle. This roughly doubles the temperature difference for heat recovery from the past maximum of around 20°C to a maximum of 44°C, thereby approximately doubling the amount of cooling obtained from a given flow of hot water.

The technology has potential future applications using low-temperature waste heat from industry or unused heat from district hot water networks in the summer, and will be incorporated into a new absorption chiller made by Johnson Controls–Hitachi Air Conditioning.