Business Improvement through Use of Digital Dialogue Services

Business Improvement through Use of Digital Dialogue Services

Dialogue AI, meaning the use of AI for interactive speech interfaces, has attracted interest along with the rise of smartphones and smart speakers in consumer markets and corporate initiatives such as chatbot and speech recognition services. The aim of dialogue AI is to create new services and improve business processes by converting human speech into digital form. This article looks at the practical business application of dialogue AI in finance institutions, describing the technologies and features that future dialogue AIs will required by considering the difficulties faced with existing chatbots and the approaches being adopted to overcome them. 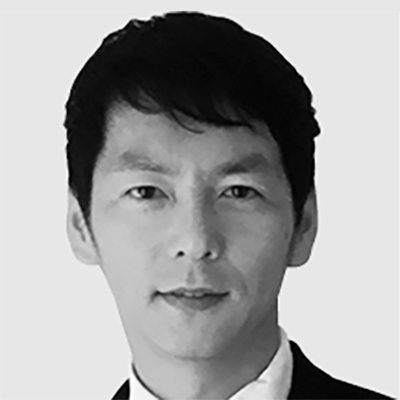 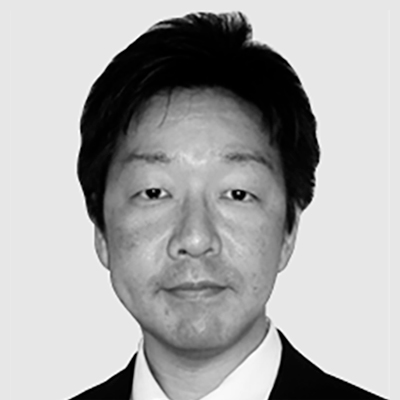 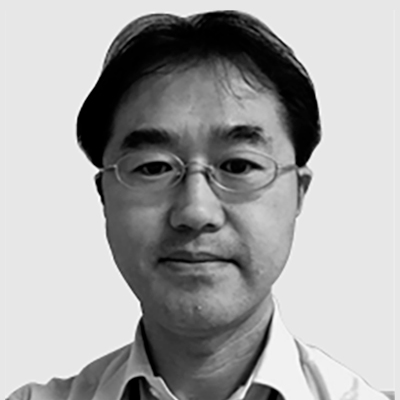 Breakthroughs over recent years in areas such as deep learning and improvements in computer performance have raised expectations for the corporate use of artificial intelligence (AI), with the subject featuring in newspapers and magazines. One use of this technology is dialogue AI, which combines speech processing (the conversion of analogue speech data into digital text) with language processing (the interpretation of what the text means) (see Figure 1).

Dialogue AI provides a way to improve business efficiency through its use in new types of interface, such as machines that accept verbal commands or frequently-asked-question (FAQ) chatbots that answer questions in place of people. Accordingly, it is seen as a way of solving problems facing society in Japan, a nation that is dealing with a shrinking workforce due to its aging population and low birthrate.

This article describes the challenges that arise when dialogue AI is utilized in a financial institution and considers how to go about overcoming them.

Speech processing and language processing are used to convert user speech into digital data in a form that a system is able to process.

Devices that use dialogue as an interface in applications such as smart speakers, chatbots, communication robots, and voice-operated assistants have become increasingly familiar in recent years, with rising market expectations for this type of interface.

The use of dialogue AI as an interface is seen as having the potential to improve convenience for financial institution customers. Past practice when requesting a service from a financial institution, such as withdrawing money from a bank account, has typically involved filling out a form or using the screens on an automated teller machine (ATM), tasks that the customer is required to understand and complete by themselves. This can be difficult for people who are unfamiliar with such procedures.

The new interfaces are expected to make things easier for customers by using a dialogue AI to assist with the procedure. In other words, the machine is able to converse with the customer to determine what it is they want to do, and then execute the desired procedure for them. The potential benefits include saving the customer from having to find the appropriate form or screen themselves (see Figure 2).

There has been a major shift over recent years in how things are done, moving away from form filling and toward more interactive methods. This change has involved a progressive move from handwriting to mechanical data entry to speech, a shift toward user-centric interfaces that eliminate the difficulties that users have in understanding what is required and in supplying information.

These technologies can be put to a wide variety of uses, such as a dialogue AI chatbot that responds to inquiries or the use of speech processing on its own to take the minutes of meetings. Table 1 lists examples of services already on the market that use chatbots or speech recognition. These are used across a wide range of activities at financial institutions, from front end to back end processes, with the technology seen as being able to deliver benefits that include not only a reduction in workloads but also assistance with making quantitative and qualitative improvements in service. 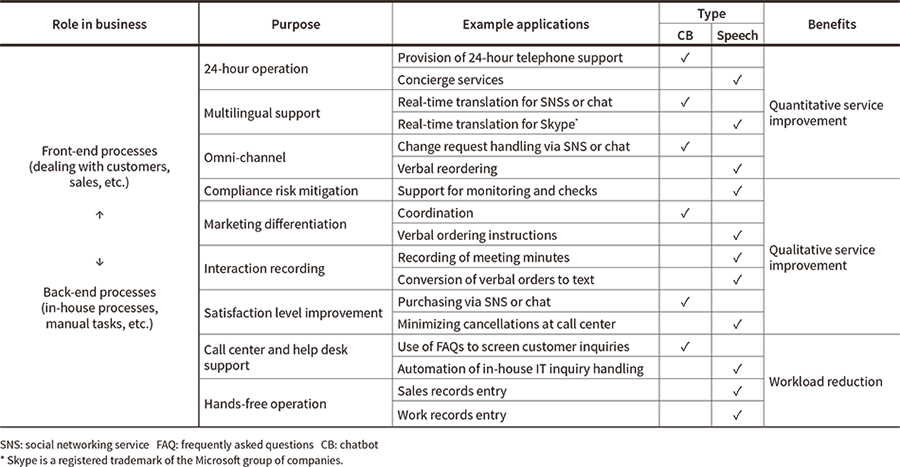 Business services based on chatbots or speech recognition are appearing in diverse applications, with this use expected to grow in the future.

One example of a dialogue system already in widespread use is the chatbot. The challenges in this case include poor reply accuracy and the considerable effort required for maintenance. Examples of speech recognition applications include its use for voice-activated appliances and to record the minutes of meetings. The challenges here include the need for the microphone to be located close to the person speaking to achieve acceptable accuracy and that each person has to have their own microphone.

Past dialogue systems (developed by Hitachi) have operated on the table-lookup principle whereby a single answer is provided for each user inquiry. This works by calculating the similarity between the actual text of the question from the user and the list of pre-defined questions stored in the table. If a match with high similarity is found, the system outputs the response associated with that question (see Figure 3).

Unfortunately, because the same question can be expressed in many different ways, a problem with the old system was an inability to find the pre-defined question that matches the actual question asked. In response, drawing on the idea that the forms in which people express themselves can be broadly categorized into seven patterns, Hitachi assessed the probability of the old system correctly identifying questions expressed in each form (see Table 2). The accuracy of the system for each pattern was determined using a data set made up of manually generated questions expressed in each of these forms for 195 FAQ entries (7 patterns × 195 entries) (see Figure 4).

The results indicated that accuracy was especially low (39 to 44%) for patterns 6 and 7 where expected information (such as the activity being performed, device name, screen name, and so on) was omitted from the question.

This type of chatbot looks up the answer to each question in a table. Natural language processing can also be incorporated to narrow down the intended meaning of the question.

Hitachi has enumerated the alternative forms of speech (patterns) that people tend to use when asking about something that has happened. As patterns 6 and 7 in particular cover a wide variety of different cases, a long reply has to be generated to indicate that it is a correct answer. Unfortunately, longer replies take more effort for the user to read and this can result in their failing to understand.

The graph shows the accuracy achieved using Hitachi’s Natural Language Understanding (NLU) engine. The system is able to return the correct answer for most variations of phrase ordering or particle usage as occur in patterns 1 and 4. While the accuracy for patterns 3 and 5 was lower in cases when the words used were not registered in the system, the correct answer was returned once these words were added. The results also show that accuracy falls dramatically for patterns 6 and 7 in those cases when the questions were asked in different ways or when necessary information was missing.

The system answers the question once the required information has been obtained and only one matching question remains. A form of machine learning called conditional random fields was used to obtain information from the user. When the reply accuracy was assessed again to determine the efficacy of this technique, it succeeded in reducing the proportion of dialogue failures for patterns 6 and 7 by about 20%.

The user will not necessarily ask the question in a way that provides all of the information needed to identify the answer, as is the case with patterns 6 and 7 in Figure 4. In such cases, the dialogue bot identifies the correct answer by first determining what information is missing and then prompting the user to provide it.

One of the issues with chatbots is the high cost of maintenance. Use of current chatbots to respond to user inquiries requires the collation of a wide variety of different question forms. The problem with this is the difficulty of producing a comprehensive list at the first attempt.

What happens instead is that a human must review the dialogue logs once the system is in operation and add question forms that were not previously included.

In response, Hitachi has adopted “growth dialogue” (sentence form extrapolation) systems that minimize maintenance costs by generating omitted forms automatically (see Figure 6). When Hitachi conducted simulations using operator logs from one of its call centers to assess the operational cost savings provided by this method, it achieved a reduction of 60% in the cost of adding each additional question form. 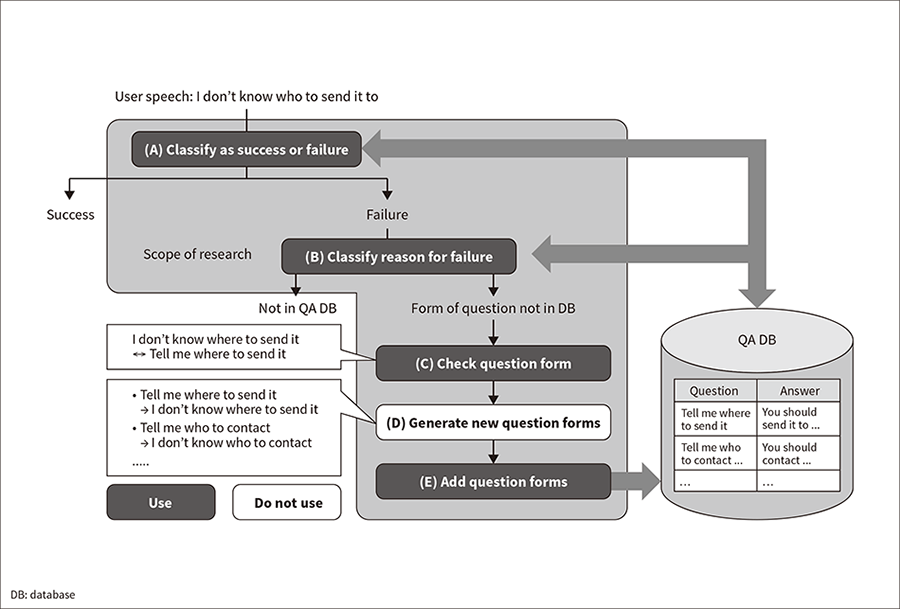 Incorporating the system-led dialogue and growth dialogue techniques into an existing chatbot succeeded in improving response accuracy while also cutting operating costs, two of the problems faced by chatbots. However, because these changes mean there is no longer a one-to-one correspondence between questions and answers, obtaining the correct answer requires a means of selecting the appropriate form of interaction to use for the question.

Another requirement, meanwhile, is a way to deal with users who want to query any terminology that they do not understand while the dialogue is still in progress.

To satisfy these, Hitachi devised a dialogue system that is able to switch responses to suit the user by incorporating a dialogue task switching function (see Figure 7). 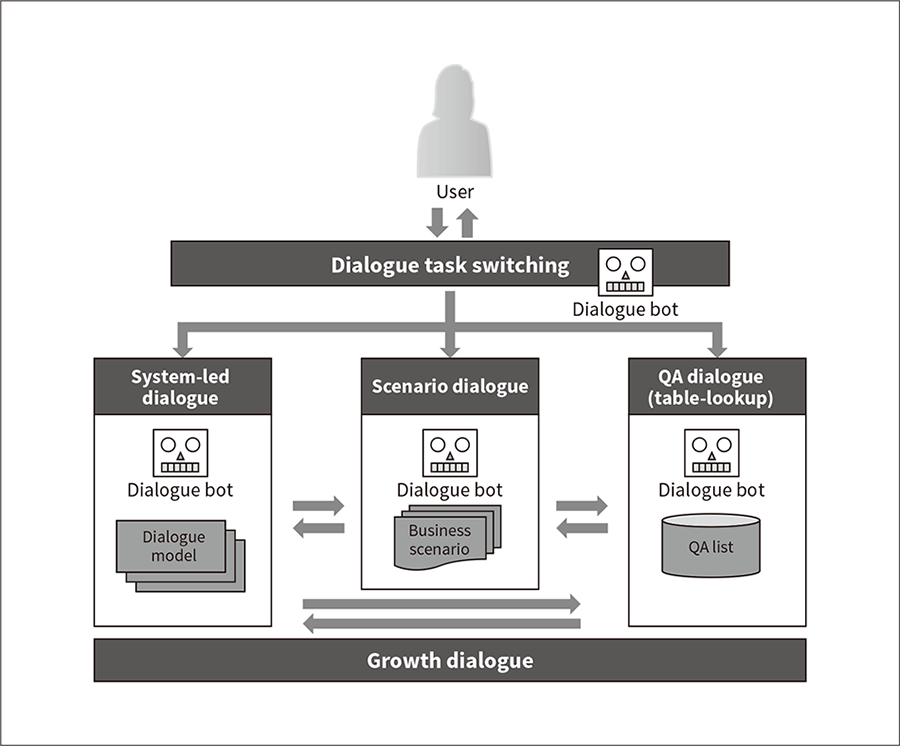 Influenced by factors such as working practice reforms and the arrival of smart speakers on the market, people feel comfortable about using speech recognition in routine meetings or when engaging with customers at a retail store, resulting in growing demand for workload reduction and the use of accumulated dialogue records. However, because speech recognition accuracy falls away the further the microphone is from the speaker’s mouth, most applications are found at call centers, where audio is captured by a telephone, or at large conferences where gooseneck microphones, for example, are used to provide each speaker with a high-quality microphone of their own.

For a variety of reasons, there are situations in business where it is desirable to record dialogues as text without those involved necessarily being aware of the microphones. Accordingly, Hitachi has looked at using technology that is able to convert the speech of a number of people at a venue into text using only a single microphone (see Figure 8).

As Hitachi’s proprietary sound source separation technique can use a microphone array to identify different voices based on the direction from which they are speaking, it is possible to separate the speech from a number of different people and convert it to text using a single microphone array.

This means it is possible to record dialogues without those involved being aware of the microphone, extending the scope of possible applications to include situations such as company meetings or talking to a customer at a shop counter (see Figure 9). There is also scope for using the technology to improve service by analyzing the collected data for such purposes as identifying customer preferences or performing compliance checks on the sales pitches used. 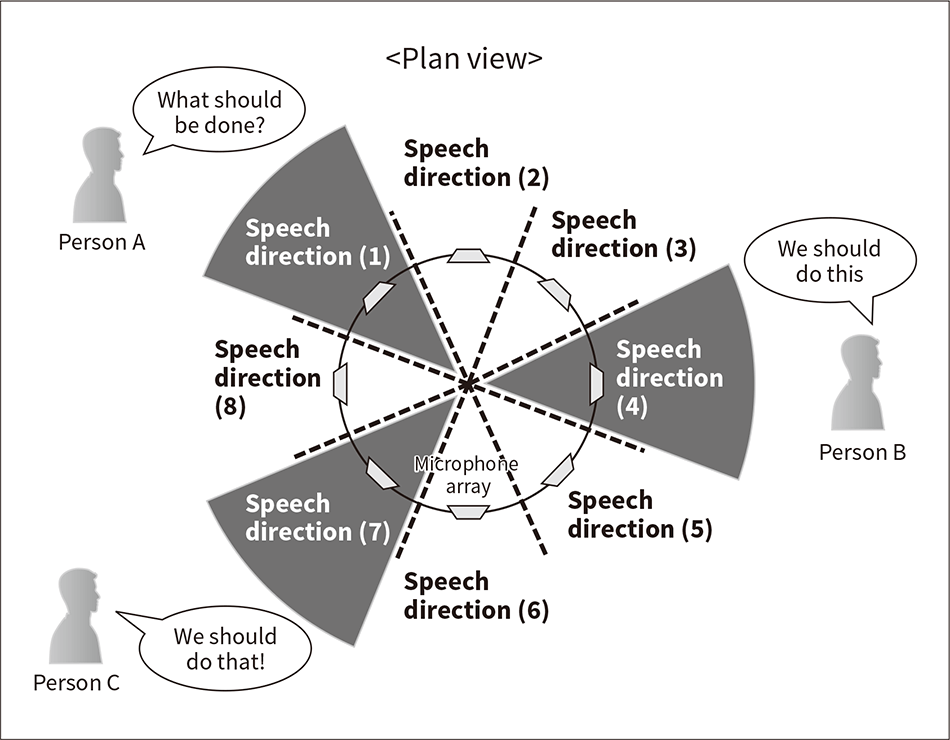 The ability to convert speech to text based on the direction from which the speech is received by a single microphone means that the person speaking can be identified in the text conversion process. 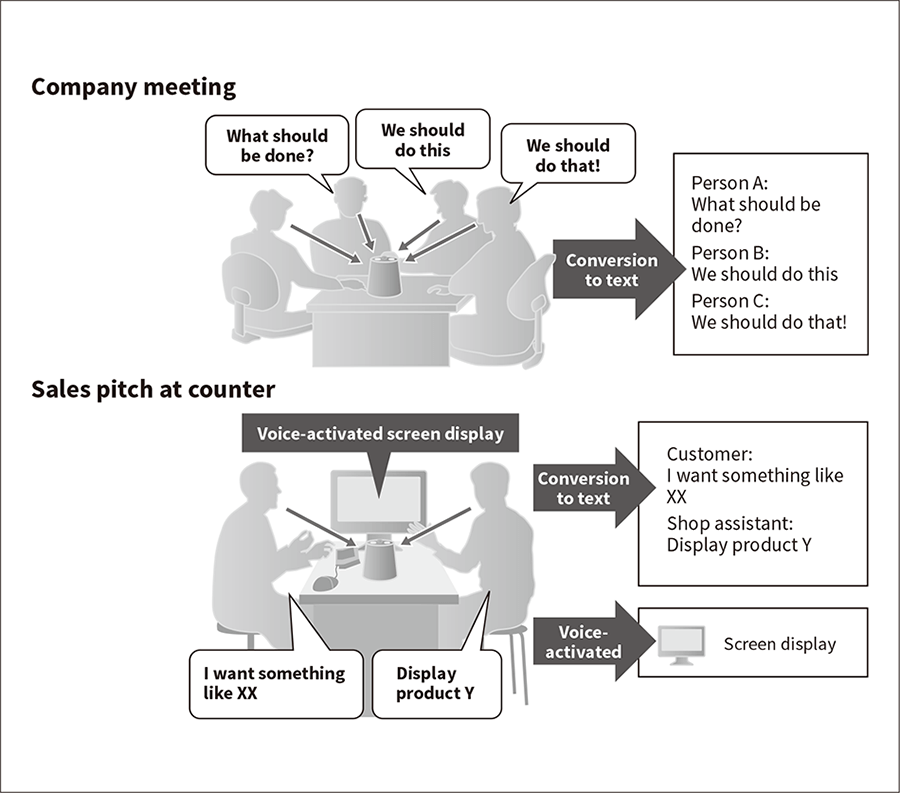 This article has looked at the use of dialogue AI and speech recognition to improve business efficiency.

Dialogue AI has the potential to extend beyond its role as a simple user interface and find uses in various different forms and different business situations. Hitachi intends to continue with this work and contribute to business innovation by customers through digital dialogue.