The lifecycle management of IT systems is a never-ending task, with one of the key challenges of IT departments being to keep up with other global corporations by staying up to date with technical developments in the IT sector and by providing staff with a reliable environment that can be used securely and with confidence. Hitachi Group’s Information system platforms have been expanded over time by the IT departments of different business divisions and group companies in accordance with their respective workplace requirements. Along with generic enhancements such as improving security and establishing disaster preparedness measures, the requirement now is also for functions that can provide a platform for work style reform, including the use of smart devices to access mail, scheduling, and other services from outside the office. Against this background, Hitachi has been progressively making efficiency improvements by centralizing its IT platforms and all aspects of their planning and operation. This article provides a history and overview of the IT platforms that support the work style reform that Hitachi has been working on for many years, describing them from the perspectives of IT administrators and users. 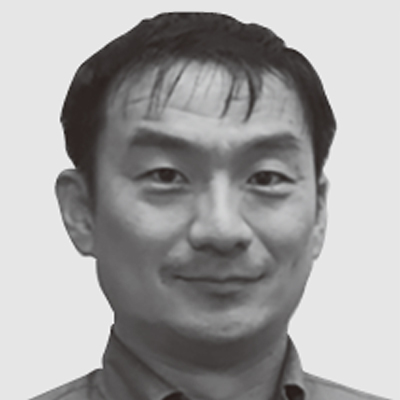 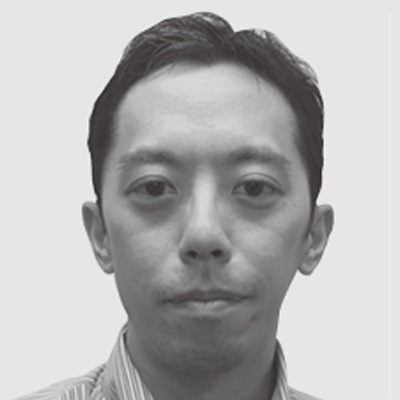 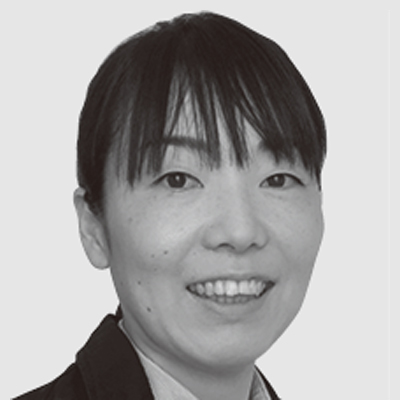 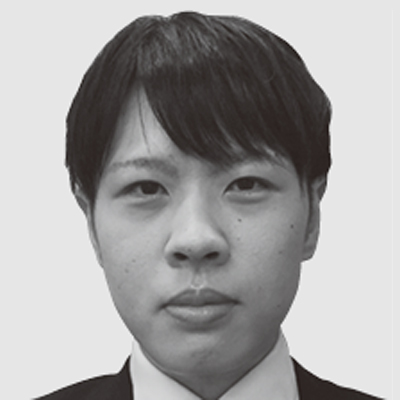 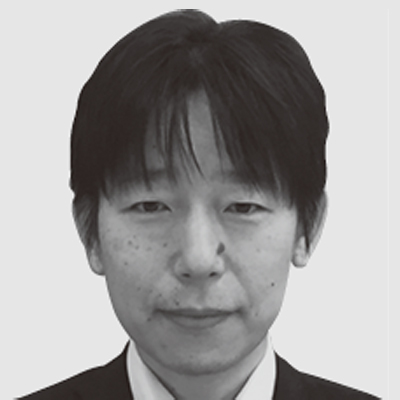 Hitachi Group (hereinafter “Hitachi”) is working to “eliminate time and location constraints on working practices” as a means of growing in the global market. Initiatives include simpler and more flexible procedures for working from home or satellite offices, providing smartphones and other tools in ways that suit working practices, granting approval for use of IT tools from home while on childcare or nursing leave, and expanding the network of satellite offices.

This article describes how IT is used at Hitachi to support work style reform.

2. Expansion of IT Systems along with Work Style Reform

Hitachi started using thin clients in 2002, and, in 2005, began establishing model offices that utilize IT as part of work style reform in Japan together with practices such as paperless documentation and free-addressing. A web-based teleconferencing system was introduced in 2009 that allows users to attend meetings from their desks rather than using a meeting room. Along with tablet computers featuring enhanced security functions (smart devices), the integration of collaboration tools was introduced in 2014 with the aim of engaging in global work style reforms. These include a virtual desktop as well as providing access to mail, scheduling, and other services from outside the office, and continue to be used at sites around the world.

As it proceeds with work style reform, Hitachi has adopted the latest IT and expanded its IT systems in ways that are not constrained by time and location (see Figure 1).

Together with establishing the facilities for teleworking, offices, and other workplaces, other important considerations when implementing IT platforms to support work style reform include hardware-related initiatives such as support for the latest devices and the provision of global networking and security management systems, and extending the software infrastructure to encompass more efficient working practices and business process visualization.

Furthermore, along with providing an environment that offers close support for users in the form of helpdesk and on-site support systems, it is also essential that governance practices be established involving the formulation of operational rules and guidelines.

Along with strengthening security and authentication, Hitachi is also taking active steps to adopt advanced technology through the use of trials with the aim of providing IT platforms of higher quality and designed for convenience.

3. Wider Use of Telework Infrastructure and Strengthening of Security Management

Hitachi provides staff with devices that suit the nature of their work (such as the type of work and working conditions). Examples include the approximately 200,000 Windows*1 7 PCs installed independently by group companies, 110,000 thin clients that emphasize security and virtual desktop environments, 5,000 global collaboration personal computers (GPCs) (a hybrid PC that combines thin clients with a conventional fat-client PC to maintain security without compromising convenience), and 70,000 smart devices that staff can use in between times (see Figure 2).

Along with the installation of security patches and use of anti-virus software, these also utilize encrypted communications and two-factor authentication for remote access via the Internet and are equipped with communication control functions that block access to dangerous sites to ensure that work from home or other forms of telework can be performed securely. Functions such as hard disk encryption and remote wiping are also essential for dealing with the possibility of a device being lost. Hitachi has also established its own management platform for smart devices that provides centralized management of devices that operate using different network providers. Along with identifying and managing devices loaned by companies, this also manages applications and the version of the operating system (OS) they are running.

*1
Windows is either a registered trademark or trademark of Microsoft Corporation in the United States and/or other countries.

Figure 2—Endpoint Devices and Appropriate Security Measures for Such Devices 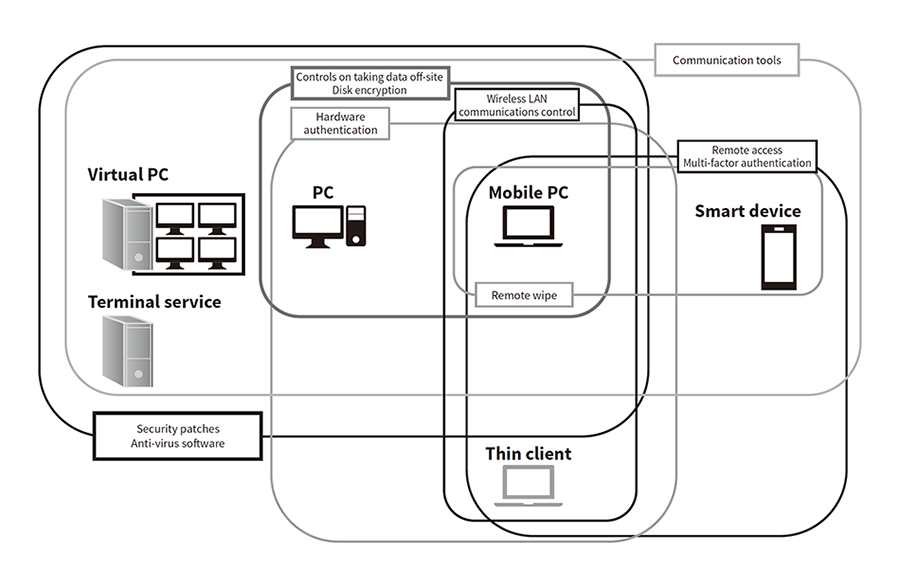 A variety of different sorts of clients are provided to suit the different ways in which staff use them.

4. Implementation of Virtual Desktop Environment that Improves Convenience and Efficiency

Virtual desktops can be broadly divided into those that use server-based computing (SBC) and those that function as virtual PCs (with a fixed allocation). Hitachi uses the cost-efficient SBC method as the default, with virtual PCs being provided for work that has specific requirements in terms of applications or resources. With such a large number of business divisions and group companies, Hitachi administers more than 60 configurations for SBC alone (see Figure 3).

Hitachi has made ongoing enhancements over a decade and a half or so of operation as it strives to improve convenience and make operation more efficient. Some examples are listed below.

(1) Faster logon and logoff
Logon time is a factor in user convenience and satisfaction. Through a series of enhancements that have included reducing profile sizes, periodic deletion of unneeded files, use of solid-state drives, and improvements to the logon and logoff scripts, the logon process has been made about three times faster than when SBC was first introduced.
(2) Self-reset function
A function was developed to allow virtual PC users to perform a reset or reboot for themselves if an OS crash or session freeze occurs, something that in the past they had to ask the service desk to do for them. This was well received by users and led to a drastic reduction in the number of service desk calls.
(3) Maintenance-free user operation
Precisely scheduled maintenance jobs are run overnight by the data center, covering the updating of middleware and standard applications, scanning for viruses, periodic reboots, deletion of unneeded files, and license checking. This avoids any need for users to do their own maintenance.
(4) Close to 100% on-time delivery
As around 6,000 applications to add, modify, or remove accounts are processed each month, tasks such as preparing the virtual desktops and linking them to user information are performed automatically by collating these applications in a database and running as them as jobs. This has improved user satisfaction by reducing human error, shortening lead times, and providing hardware on time.
(5) Continual disaster readiness
The system has been equipped with an emergency capability whereby, if one data center is damaged, its users can continue their work using a different data center. As this is a contingency, it only supports simultaneous connections for up to 30% of the users affected by the incident, providing an SBC environment with limited access to mail, browser, and Microsoft*2 Office*2 applications. As it would defeat the purpose if users did not know how to use the business continuity plan (BCP) environment when an incident actually occurred, they can access it at any time to familiarize themselves with it through routine use.

*2
Microsoft and Microsoft Office are either registered trademarks or trademarks of Microsoft Corporation in the United States and/or other countries. Virtual desktop systems are installed at Hitachi’s robust data centers where they are monitored 24 hours a day, 365 days a year. Staff can choose an appropriate device and virtual desktop that allows them to work securely and with confidence regardless of time or place.

Past practice was for the on-site IT departments at Hitachi’s various business divisions and group companies to independently handle everything from the procurement of client devices to their installation (kitting and distribution) and administration (asset management, device inventory management, maintenance, and disposal). However, this approach raises the following problems.

To resolve these problems, Hitachi established its PC Integration as a Service Center in 2017 to consolidate administration across the entire client device lifecycle. This succeeded in reducing the number of unused devices held across different sites by 1,600 while also cutting IT overhead through the consolidation of device installation and administration work. It also improved IT governance though the adoption of security controls and integrated asset management (see Figure 4).

As consolidation has its issues, the following measures were adopted with consideration given for the balance between user convenience and cost. 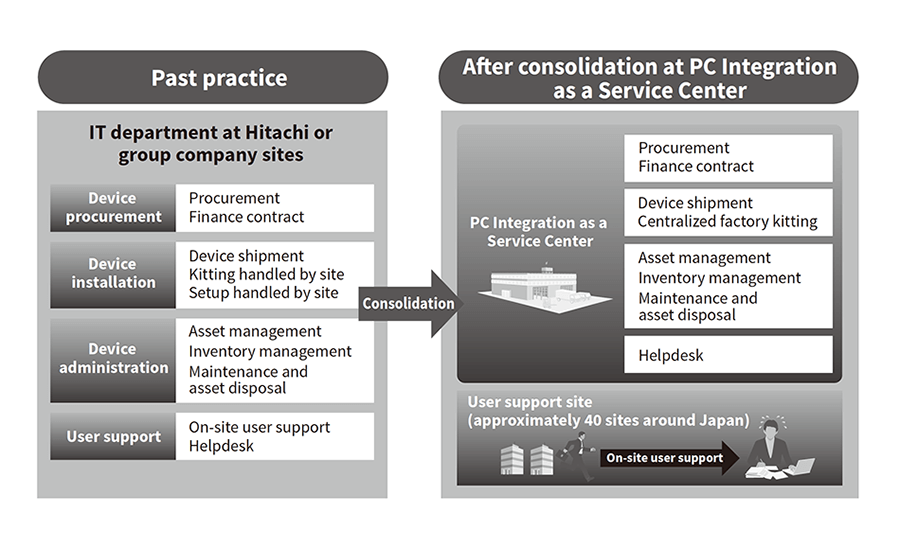 Device administration, which each site previously handled for itself, has been consolidated at the PC Integration as a Service Center where it operates continuously and efficiently.

6. Providing a Network Environment and Banning Participation in Meetings while Walking Around

Hitachi has installed remote access (RA) at its global sites to enable users to telework when working from customer premises, at home, or when away on business. To ensure cybersecurity, the standard features of this RA facility include an intrusion prevention system (IPS), intrusion detection system (IDS), firewall, remote access gateway, and two-factor authentication. The roll-out to date covers RA for PCs, RA for smart devices, and RA for mail and collaboration, and provides a continuous trouble-free teleworking environment to between 8,000 and 15,000 connected users at a time.

Hitachi is also installing wireless local area networks (LANs) at offices so that staff can carry their PCs around and use them when meeting other people. In undertaking this work, Hitachi distinguishes between wireless LANs, which prioritize convenience, and wired LANs, which offer higher network quality. Wireless LANs are subject to interference by external signals. This is typically more of an issue in older buildings, and it is important to produce signal strength maps and use them when designing where to install wireless LAN access points. As people may also bring devices such as mobile wireless routers on-site, the wireless LAN is being installed using the 5-GHz band rather than the 2.5-GHz band commonly used by these devices to minimize interference.

Meanwhile, in parallel with the expanding scope of the IT system, governance measures also need to be put in place. Although networking capabilities have been provided that make it easy to work and interact with people while on the move, regardless of time or place, Hitachi has banned staff from participating in meetings while walking around for reasons of workplace safety.

Along with putting the equipment needed for teleworking in place, including providing staff with headsets and installing microphones, speakers, projectors, and monitors in meeting rooms and other meeting spaces, guides and rules are being produced on how to go about telework. Hitachi is also implementing measures aimed at encouraging greater use of telework, which includes working from home or satellite offices. These measures include running departmental telework competitions and publishing rankings on how much telework is being used.

Hitachi has been working for many years to establish and operate IT platforms that support work style reform. By using the knowledge it has built up from past experience to make its solutions and services of greater value to customers, Hitachi intends not only to support the implementation of IT systems, but also to assist with their mastery (support mastery of tools).