The adoption of CBTC systems that use radio communications for train control has been encouraged by railway systems around the world in recent years, enabling more efficient operation than conventional signalling systems as well as significant maintenance savings and reductions in the amount of equipment needed. Hitachi has received an order from the SDC in Singapore to upgrade the signalling system for the Sentosa Monorail to CBTC, to supply additional rolling stock, and to install a voice radio communication system. This article provides an overview of the CBTC system and describes the work leading up to its installation. 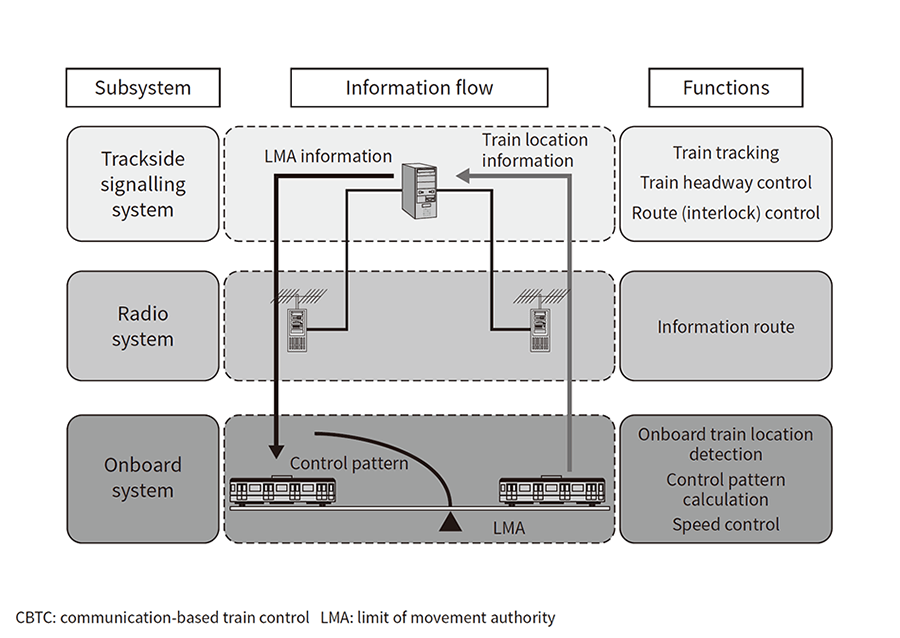 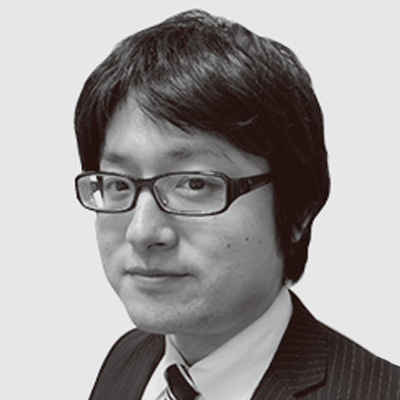 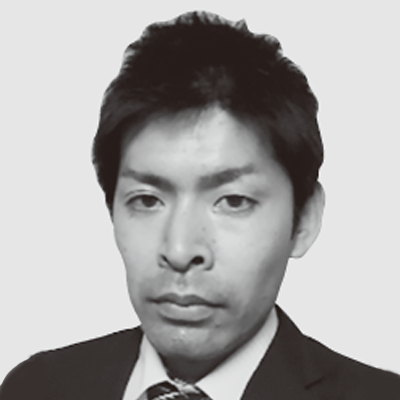 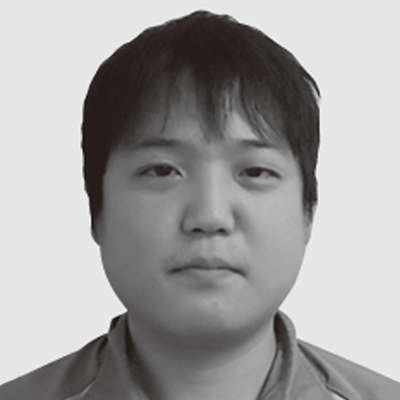 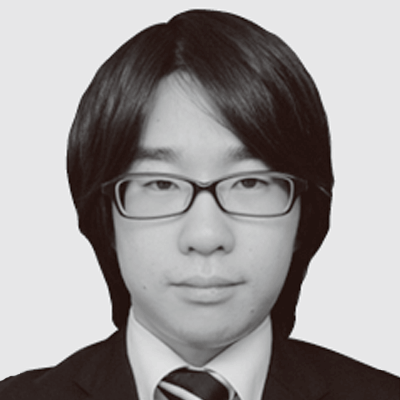 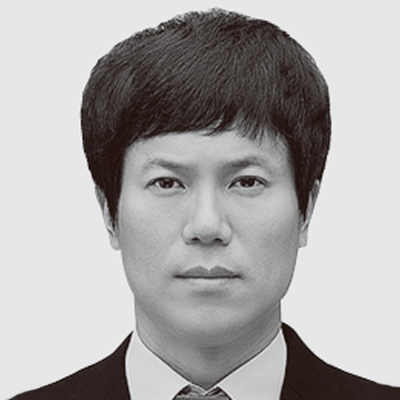 Communication-based train control (CBTC) is a signalling system that uses communication between onboard and trackside equipment for train operation and control. CBTC has been widely adopted in recent years on monorails, commuter trains, metros, and other urban railway services. In October 2014, Hitachi, Ltd. won an order for a CBTC system and additional trainset from the Sentosa Development Corporation (SDC) in Singapore. This article provides an overview of the Sentosa Express and describes the features of Hitachi's CBTC system.

The Sentosa Express is a monorail operated by SDC that runs from the Singapore mainland south to Sentosa Island (four stations and a total route of 2.1 km). Hitachi won a full turnkey contract to deliver the rolling stock, signalling system, electrical distribution system, traffic management system, points, and other key equipment and systems for the monorail in 2007. Issues subsequently arose, however, with crowded cars and stations due to the growth in passenger numbers following the opening of new developments in 2010 that included a casino and Universal Studios Singapore*. With the Singaporean government expressing a strong desire to see matters improve, Hitachi set about resolving the problems by upgrading the signalling system to increase capacity. Hitachi installed a CBTC system to replace the previous signalling system and supplied an additional (CBTC-compatible) trainset and a voice radio communication system for communications between passengers and the operation control center (OCC).

(1) Signalling systems
The new CBTC system uses driverless automatic train operation (ATO). Under ATO control, the train departs, accelerates, runs, decelerates, and brakes in accordance with a set “diagram” (schedule), and the system also handles station stopping points, train door opening and closing, and cab switchover.
(2) Onboard systems
As the project required continued operation using the previous system during the changeover to the new system, all existing onboard systems remained in use. This required the new CBTC system to use the same interfaces as the previous onboard systems.
(3) Voice radio communication system
For emergencies, the previous system included a facility whereby passengers could use the emergency communication equipment provided in each passenger car to talk to the driver in the cab. In the case of the new CBTC system, however, because it is driverless, a voice radio communication system was installed to allow passengers to talk to staff at the control center. Furthermore, the installation used the same interfaces as the previous radio system to enable reuse of the frequencies and the antennas, cables, and other equipment from the existing wireless data communication system.

3. Features of a CBTC System

3.1 Standards Compliance and Other Features

The previous signalling system was based on the use of fixed blocks, an approach that has long been used on existing railways. The fixed-block method only permits one train at a time between stations, such that a train cannot depart its station until the preceding train has departed the next station down the line. The distance of these track blocks imposes a bottleneck on operations, preventing trains from running more closely together and limiting how much the headway (gap between trains) can be reduced.

In contrast, a CBTC system is defined in the IEEE 1474 international standard with location determination that is independent from track circuits, that uses bidirectional train-to-trackside data communications to ensure safety, and that has continuous train-to-trackside communications. The new CBTC system is based on the use of moving blocks, with train location determination and operational control being performed using a wireless system.

The diagram shows the flow of information during train control by the CBTC system.

Figure 2 shows the architecture of the CBTC system. The onboard automatic train control (ATC) equipment uses information from the transponder receiver and tacho-generator to calculate its own location and transmits this via its mobile station (MS) to the trackside. The CTBC logical unit receives this train location via the antennas installed on the track, the base stations (BSs), the base station controller (BSC) in the equipment room, and the CTBC's local-area network (LAN). The unit uses the received information to generate train control information that is sent back to the onboard ATC equipment via the same route. The train then operates in accordance with this information. 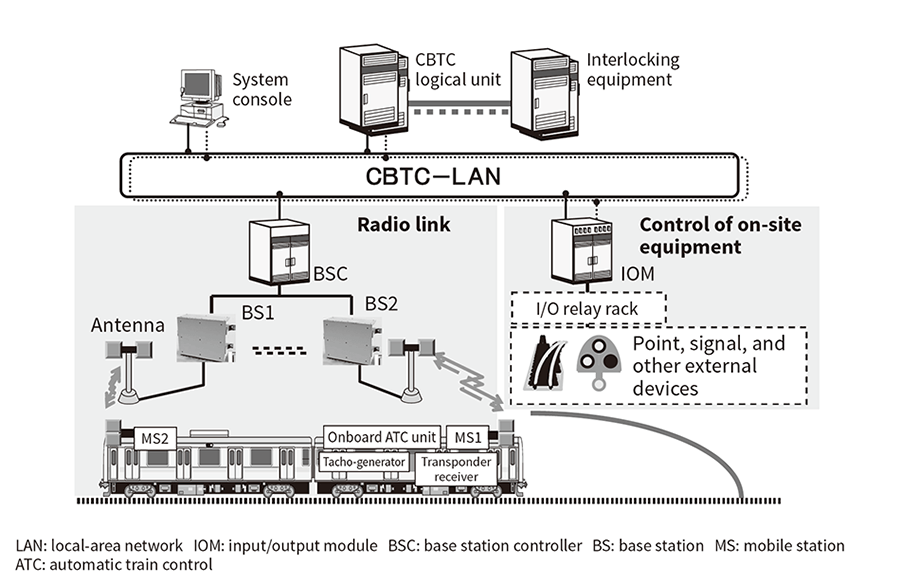 The diagram shows the architecture of the CBTC system.

3.3 Details of the Signalling System

In the CBTC system, each train first adjusts its location using the cumulative distance traveled and transponder information. Taking into account its own distance traveled, speed, and direction, each train uses the CBTC wireless link to send its location to the trackside signalling system in real-time. This train location information indicates the distance from a transponder on the trackside.

This makes it possible to keep the distance between trains as short as the circumstances allow, increasing the service capacity by shortening operating schedules and increasing the number of trains that can run at the same time.

3.4 Features of the CBTC Wireless System

(1) Orthogonal frequency-division multiplexing (OFDM)
This avoids interference by transmitting data over multiple carrier frequencies.
(2) Frequency hopping and time diversity
This works by changing the frequency used for each time interval and sending the same data multiple times.
(3) Site diversity
The trackside antennas are located in such a way that trackside-to-train communications can continue to function even if one of the trackside or train wireless systems has a fault.
(4) Zone-based frequency allocation
This increases the number of non-overlapping channel combinations by reducing the bandwidth of each channel compared to a conventional WLAN to make more channels available.

The diagram shows the WLAN and how CBTC uses the different radio channels.

The construction of further attractions and other facilities is planned for Sentosa Island. Plans also include extensions to provide access to these new facilities and the number of monorail passengers is expected to grow.

Although the switch from a fixed- to a moving-block system that has accompanied the installation of the new CBTC system has allowed an increase in the number of trains that can operate at the same time, the most important factor influencing capacity is the track layout at the terminal stations. As both terminal stations currently have a single-track layout, the subsequent train is unable to enter the station until after the preceding train has departed and line switching is completed. As the scope for signalling system enhancements to further increase capacity has been exhausted, further improvement will be difficult unless a multi-track layout is adopted. Hitachi intends to work towards being able to offer ways of further increasing capacity should the SDC decide to extend the monorail or make other changes.

The Sentosa Express was the first railway line for which Hitachi has supplied a full package that combines a CBTC trackside signalling system, onboard system, and wireless system. In the future, Hitachi intends to draw on the experience gained from this project to deploy its CBTC system in other overseas markets.