Hitachi has a history of involvement in the development of measurement technologies and equipment starting with electron microscopes dating back to its early years, as well as liquid chromatography and chemical analysis. Along with sharing challenges with customers and other partners and developing new instruments using collaborative creation through a process of open innovation, Hitachi has also, in recent years, been working on utilizing the data collected by measurement instruments against a background of advances in information technology. In this article, Toshiyuki Ikeda, Representative Executive Officer, Senior Vice President and Executive Officer, and Chief Technology Officer of Hitachi High-Technologies Corporation explains where Hitachi hopes to go with its measurement technologies, which are playing a role in overcoming societal challenges in a wide range of fields, including advanced medical practices, drug development, healthcare, environmental measurement, and the development of innovative new materials. 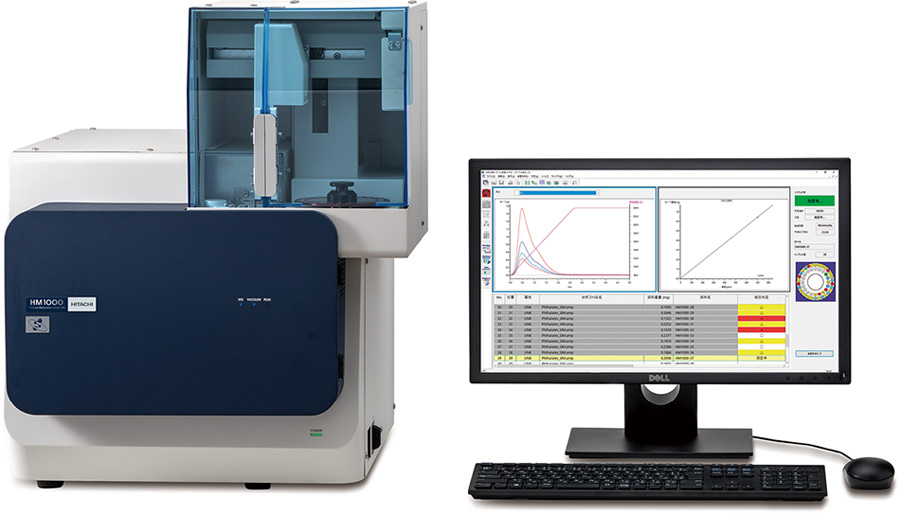 Remarkable Outcomes Brought about by Microscopy and Microanalysis

Measurement technologies have been essential stepping stones to scientific advances such as the discovery of viruses and the analysis of deoxyribonucleic acid (DNA). Having been provided back to society, these achievements have made major contributions to the progress of industry in areas like research and development (R&D) and quality management. Measurement technologies also play a vital role in innovation and in overcoming societal challenges, including global environmental problems, keeping people healthy, ensuring safe food and water, and developing new forms of energy.

Whether it be in the field of medicine or semiconductor manufacturing, the important factor for measurement instruments is that they deliver reliable and consistent results regardless of who is using them. Meanwhile, the demand from across different fields is for the ability to measure smaller features and quantities. In the case of semiconductors, the requirement is for precision processing at the nano scale, whereas in blood analysis it is for the ability to perform detailed analyses of constituents present in even smaller quantities.

Given the expectation of continuous improvements in performance, ensuring that measurement instruments deliver reliable and consistent results is not easy. To achieve this, Hitachi has sought, over many years, to develop easy-to-use instruments that are suitable for their intended purpose while also enhancing the performance of the technologies used.

Hitachi's past advances in measurement technologies have been primarily based on electron beams and spectrometry. As electron beams have a very short wavelength, using an electron microscope to direct an electron beam at a sample can provide images with much higher resolution than viewing a sample under visible light using an optical microscope. Hitachi has had an ongoing involvement in the development of electron microscopes that extends from the 1940s to the present day, and has made major contributions to advances in science that benefit people in a very wide range of applications, including physics, chemistry, medicine, and engineering.

Measurement instruments based on spectrometry, in contrast, perform their measurements using ultraviolet and visible light. Using spectrometry, liquid chromatographs are able to separate and detect the constituents of a liquid containing many different substances, and are utilized in a variety of applications that include pharmaceutical manufacturing processes and the analysis of what is contained in food. Similarly, biochemical analyzers that use spectrometry to perform biochemical and immunological assays of blood are vital clinical instruments that help keep people healthy.

Yet another type of instrument based on spectrometry is the DNA sequencer. Through their improvements in efficiency and speed, Hitachi's DNA sequencers are recognized for their contribution to significantly shortening the time taken for the Human Genome Project (1990 to April 2003) to decode the human genome. Used extensively in fields like biology and medicine, Hitachi's DNA sequencers currently have an 80% share of the global market.

The aim for the future is to extend the vacuum and electromagnetic field control technologies developed through work on electron beam control to larger charged particles (ions). In particular, this technology will lead to wider applications for mass spectrometry. In the case of DNA sequencers, information has been acquired by dealing collectively with molecules that have been amplified in number using methods such as polymerase chain reaction (PCR). Likewise, biochemistry and immunoassay analyzers have been based on the idea of blood samples being a “homogeneous solution” indicative of the condition of the body as a whole. In practice, however, different cells within the body have different functions and characteristics. The challenge for the future, then, is how to make the shift toward single-molecule measurements that look at these cells and molecules individually. Achieving this will require the ability to work with even smaller quantities and to operate at even higher sensitivities. It is anticipated that data processing techniques, such as those for extracting items of interest from among a large number of other potential candidates, will also be called on to utilize methods based on artificial intelligence (AI). 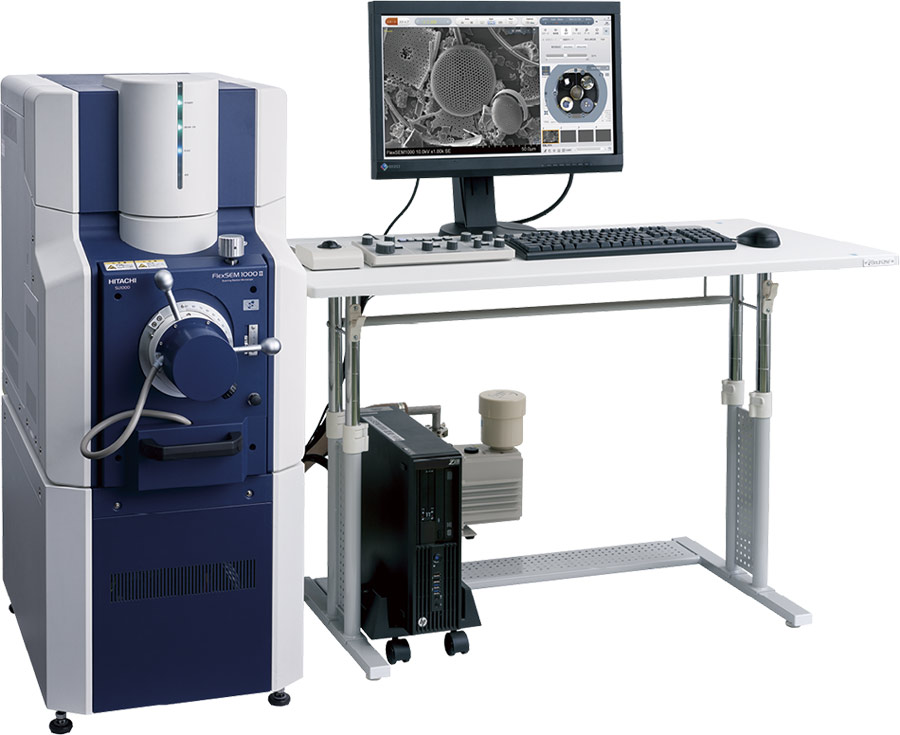 It could be said that one of the main reasons why Hitachi's products have come to be used around the world in such a wide variety of applications is their robustness. Essential to achieving robustness are dependable skills to ensure that equipment is built soundly with high quality and reliability in both product development and manufacturing.

The reason why the DNA sequencers described above were able to play such a role in decoding the human genome, for example, was entirely due to the development of a breakthrough machine that increased the number of capillaries that could be read simultaneously from eight to 96. This enabled capillaries to be read by scanning them with a laser, and aligning them correctly so as to be able to shoot through them all simultaneously. As with the CD-SEM, semiconductor manufacturers around the world have put their trust in these instruments due to Hitachi's manufacturing expertise in building calibration systems that enable accurate dimensional measurements at the nano scale.

This manufacturing expertise in turn is made possible by the presence of engineers and technicians whose skills can be relied upon. Hitachi sends young engineers to compete each year at the National Skills Competition for manufacturing and service skills where they have achieved good results on a number of challenges. This presence of large numbers of skilled engineers is a major factor in Hitachi's ability to achieve reliable manufacturing.

In seeking to satisfy the need to measure even smaller things and in smaller quantities, Hitachi's measurement technologies have advanced in two broad directions. As explained above, these are the pursuit of high performance combined with the reliability to consistently produce the same data, and the development of instruments like small and low-cost benchtop electron microscopes that are easy enough for anyone to operate.

While electron microscopy and spectrometry are typically general-purpose technologies, the instruments are also difficult to use without specialized expertise. This has led Hitachi High-Technologies Group to adopt a policy of developing products that are easy for anyone to use by producing advanced dedicated instruments designed for specific fields.

One such example is a thermal desorption mass spectrometer (a screening system for phthalates). Phthalates (esters of phthalic acid) are chemicals added to plastic to make it more flexible and are widely used in things like insulation for wires, electrical insulating tape, and wrapping film. However, four phthalates will become restricted substances from July 2019 under the European Union Restriction of Hazardous Substances (RoHS) directive, creating an urgent need for ways of measuring these chemicals. Hitachi High-Technologies has modified how its mass spectrometer works to shorten the measurement time by one-third compared with the old method.

Meanwhile, demand has arisen in recent years for the blood analyzers used in clinical applications to reliably measure substances present in extremely small quantities, such as hormones and tumor markers. The high-speed, high-sensitivity flow cell immunology analyzer developed in response to this need performs continuous high-speed measurements to prevent sample contamination while passing the sample through a very small flow cell (1 mm or less).

The instrument won the 64th Annual Okochi Memorial Technology Prize in March 2018 in recognition for how it improves the quality of medical care and contributes to people's healthcare by providing doctors and patients with rapid and accurate test results.

Application Development through Collaborative Creation with a Wide Range of Partners Hitachi has benefited in the past from a high level of technical skills in hardware. What will be needed to complement this expertise in future measurement technologies will be applications that allow the instruments to be used as required in different fields. To achieve this, Hitachi is currently engaged in a variety of initiatives that involve collaborative creation with customers and other partners to gain a broader and deeper understanding of practical requirements that can inform the development of measurement instruments.

Hitachi has a strong partnership with Roche, a Swiss pharmaceutical company, going back over 40 years, during which it has supplied Hitachi with reagents. This has also helped achieve the best combination of biochemistry/immunohematology clinical analyzers and reagents.

The screening system for phthalates described above arose out of a combination of technologies from Hitachi High-Tech Science Corporation (part of the Hitachi High-Technologies Group) and the industrial measurement systems business of Oxford Instruments plc group acquired in 2017. Having become difficult for individual companies to develop groundbreaking technologies like this on their own in recent years, this technology can be thought of as being developed through a process of collaborative creation in which multiple companies openly discussed their requirements, concerns, and other matters.

For the CD-SEM, while seeking to determine the requirements of advanced technologies and the challenges facing instrument users, Hitachi has been working on the joint development of instruments that will help overcome these challenges, including supplying instruments to the Interuniversity Micro-electronics Centre (imec) in the Kingdom of Belgium since 2005.

Another important requirement for measurement technologies in the future will be the use of the data that each instrument generates. In the case of blood testing, there have been cases when accepted conclusions have been overturned by analyzing different data values together, even including results that were previously considered to be within the accepted range. Testing for semiconductor impurities should also be able to perform detection more efficiently by using AI. This will require that the different sorts of data generated by different types of measurement instruments be collated in the cloud, and Hitachi's role will be to establish the means to do this.

In advance of this, Hitachi High-Technologies has developed its ExTOPE Internet of Things (IoT) service portal for the instruments it supplies. This web portal collects, collates, and manages measurement data and data on instrument operation in the cloud, and can also be used for things like customer data sharing and analysis.

By maintaining strong protection for data that needs to be kept confidential together with cloud-based links for data that is openly available for widespread use, and by using AI and other analysis techniques to uncover new value, Hitachi hopes to continue making major contributions to overcoming the challenges facing society in the future. 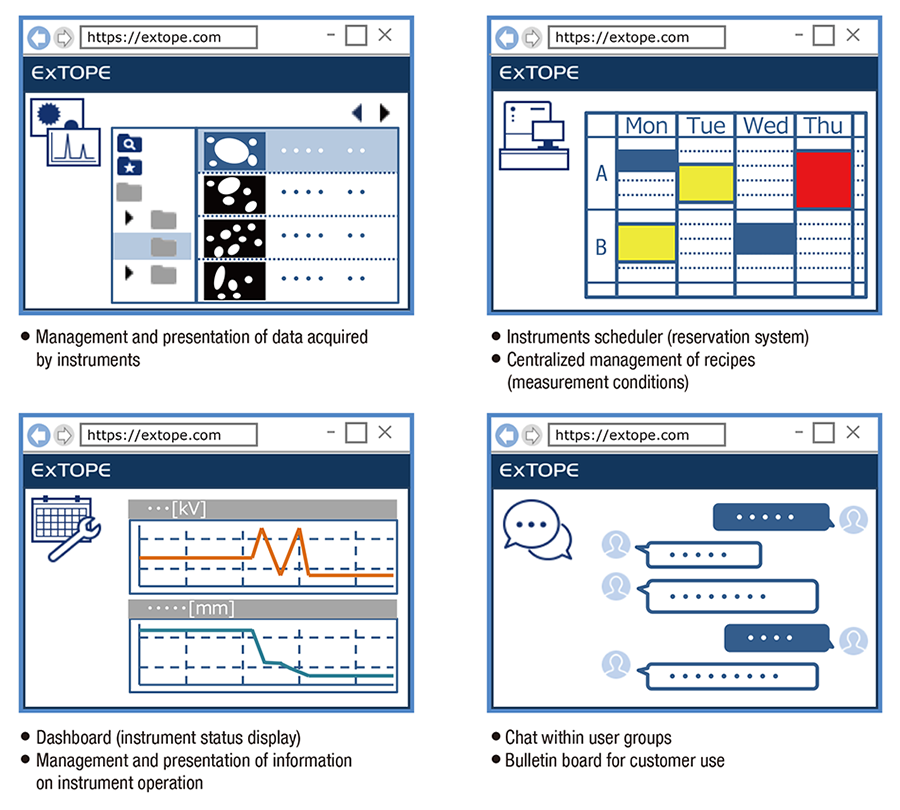