1. Photo of cross-section of camera coaxial cable for production machinery in factory automation 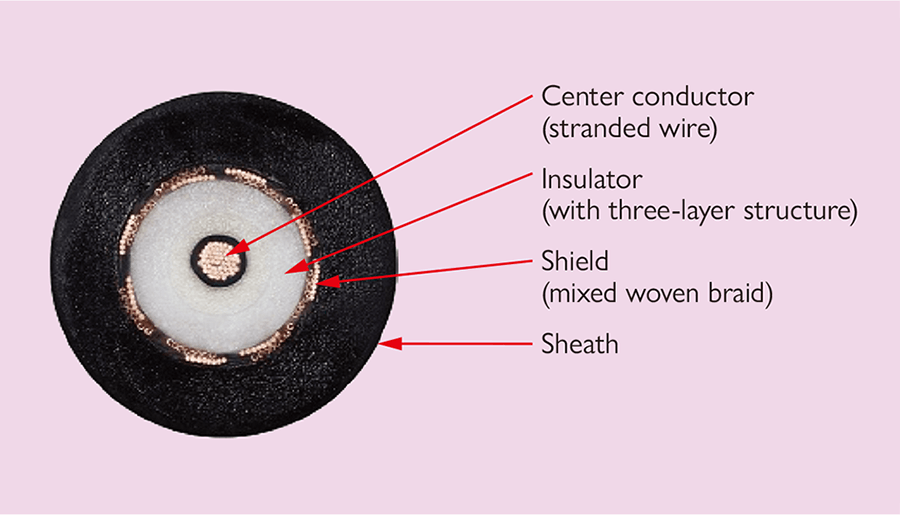 Japan's labor shortages and soaring labor costs are creating a growing market for human cooperating robots and compact articulated robots, generating an urgent need for the development of cables that can provide enough bending and twisting resistance to be mounted in the moving parts of these robots.

Hitachi Metals, Ltd. has achieved the high bending and twisting resistance needed by using a structure that lets conductors move easily in a flexible way. The structure contains an extrusion-molded three-layer insulator. The insulator's first and third layers have a solid structure, and its second layer has a foamed structure. To prevent line breaks caused by strands rubbing against each other, the shield is made of a mixed woven braid composed of copper foil thread and alloy wire. It attains high bending and twisting resistance, withstanding bending over 100,000 times in a 19 mm radius (three times the outer diameter) and twisting over 600,000 times over a 500 mm length. Its attenuation characteristic is 13.9 dB/30 m at 625 MHz. The developed structure can be applied to many different sizes and configurations, and can satisfy comprehensive characteristics along with its electrical noise resistance. 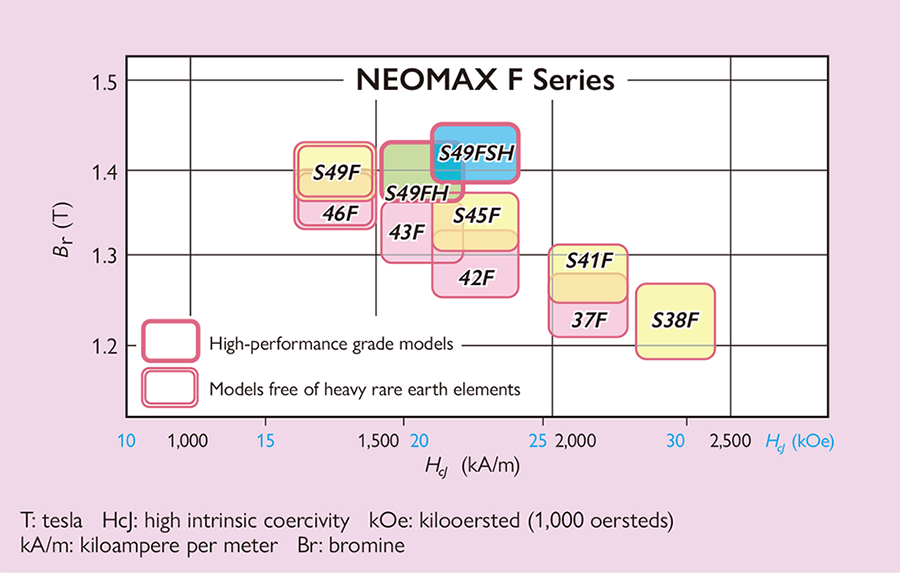 Sintered neodymium-iron-boron magnets are commonly used in energy-saving environmental products for their outstanding magnetic characteristics. But since heavy rare earth elements (such as dysprosium and terbium) are effective at improving coercivity, magnets made of these elements are used for withstanding high temperatures. These elements are currently soaring in price due in part to the environmental regulations they are subject to. Their high price and the risks of procuring them have created an urgent need to cut back on their use.

To address this issue, Hitachi Metals has studied the grain boundary phase between main phase particles that significantly affects coercivity improvement. The company has managed to reduce the quantity of heavy rare earth elements used by exploring composition regions and additional elements, and rationalizing factors such as manufacturing conditions. The 2014 release of the NMX-46F Series and the 2015 release of the NMX-S49F high-performance grade models have enabled a dysprosium reduction of about 2% by mass (2 mass%) while maintaining the same characteristics as Hitachi's previously released NEOMAX Standard Series.

NMX-S49FH and NMX-S49FSH were developed by adding improvements to the new technology in 2018. These models exceed the characteristics of previous high-performance models.

As shown by its demagnetization curve (omitted here), S49FSH has the same coercivity as S45F (containing 3 mass% dysprosium) while greatly reducing the amount of heavy rare earth elements used. It also provides a high residual magnetic flux density (Br) characteristic and is promising for applications such as drive motors for electric vehicles (an area expected to experience growing demand in the coming years). When designing and developing hot-forged products made of superalloys used for applications such as aircraft engines, finite element method-based forging simulations are used to improve design quality and speed development by reducing the number of prototyping processes. To create forging simulations with high precision, accurate material characteristic data must be entered in the simulator beforehand for the superalloy to be forged. A particularly important characteristic is the flow stress—the stress needed to plastically deform the material. The flow stress is calculated by performing a compression test and calculating the value from the deformation amounts and measured load values. But it is difficult to obtain accurate flow stress values from normal compression tests due to a number of confounding effects on the load values—heat transfer from the specimen to the test grip, the frictional force generated between the specimen and test grip, and the compressive heating generated in the specimen. Hitachi has addressed this issue by creating a method of experimentally removing the effects of heat transfer and frictional force using uniform compression testing, and a method of analytically removing the effect of compressive heating using isothermal cross-section processing. 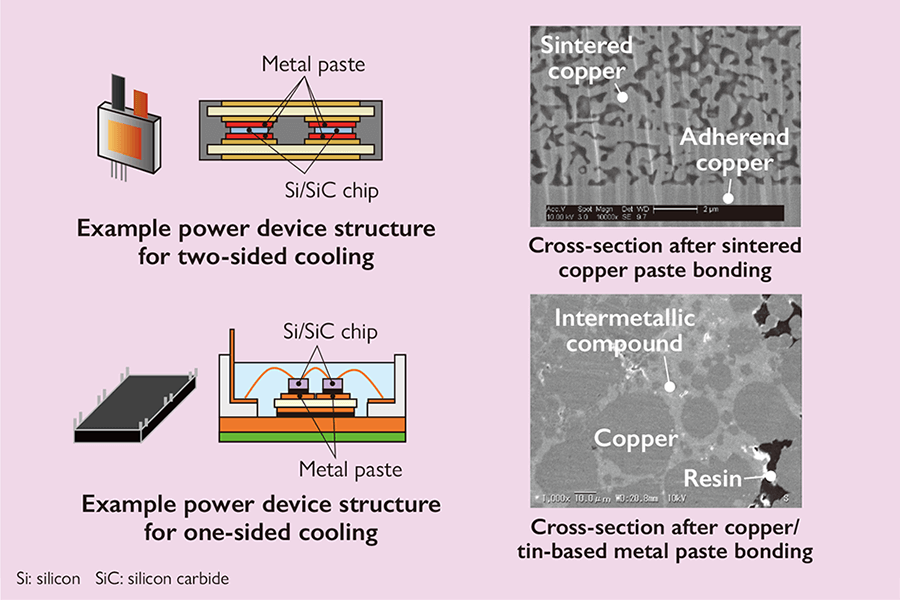 Demand for power control devices for motor control in electric vehicles and hybrid electric vehicles is rapidly increasing. Their operating temperatures show an upward trend obtaining higher efficiency. High heat resistance bonding paste materials that support operating over 200°C are also being developed. Hitachi Chemical Company, Ltd. has developed two new kinds of pastes. One is sintered copper paste having thermal conductivity of 180 W/(m•K) that is prepared through stably sintering copper particles. The other one is copper/tin-based metal paste that can bond compounds without remelting below 400°C in the same process as solder. It is expected that the use of these products offers a promising approach for downsizing and reducing the prices of power devices. Their use would also allow the operation of power control devices at even higher temperatures for SiC semiconductors, which are becoming increasingly common.

Hitachi Chemical Company has developed a nanoceria slurry for use in chemical mechanical polishing (CMP) with low scratch performance. It has started to be used in 5-nm generation devices with cutting-edge logic.

When performing ceria-based silicon dioxide polishing, cerium-oxygen-silicon bonds are first formed at local high temperatures and pressures when ceria particles are pressed into the substrate by the polishing pad, and the cerium valences change from 4 to 3. Next, mechanical action causes the silicon atoms to separate from the substrate. The increase in cerium 3 valences found by XPS measurement has shown that just immersing the silicon dioxide substrate in the slurry results in the formation of cerium-oxygen-silicon bonds because of the highly reactive nanoceria abrasive particles. The speed of the first-stage reactions in this type of polishing is the reason that nanoceria exhibits high polishing speed.

Hitachi will continue to expand the application of nanoceria slurry to cutting-edge devices and explicate the mechanism for silicon atom separation. 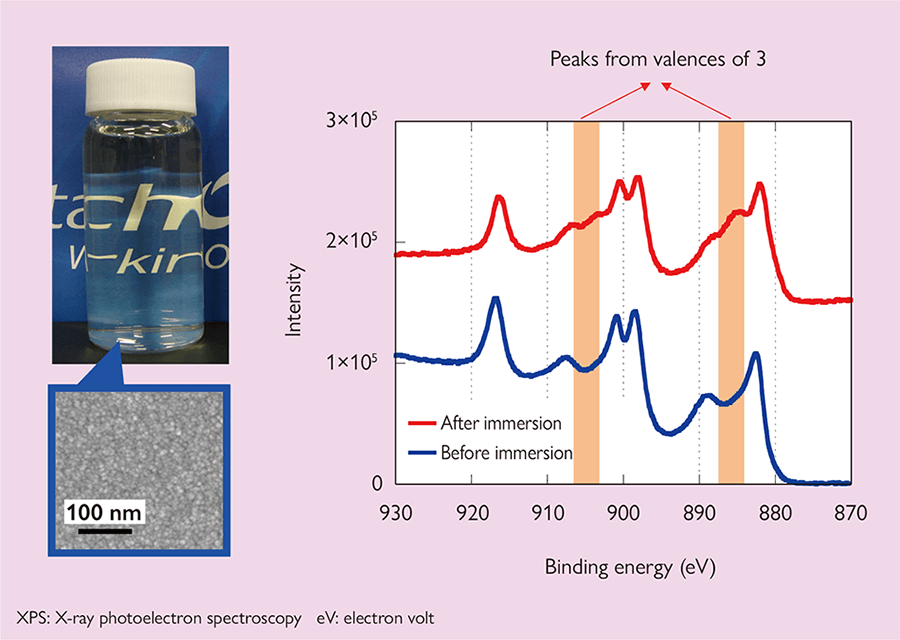