Resource Recycling in Japan and How Hitachi is Keeping Pace

Resource Recycling in Japan and How Hitachi is Keeping Pace

Worldwide GDP growth is resulting in an ever-expanding extraction of materials, creating serious concerns over energy and natural resource shortages or depletion. Hitachi is responding by working on concrete groupwide efforts designed to achieve a sustainable society. It has created an Environmental Vision, and set forth long-term environmental goals in its Hitachi Environmental Innovation 2050 plan.

This section focuses on the resource recycling work being done as part of these efforts. It presents examples of how Hitachi is remanufacturing construction machinery parts and automotive electrical parts, as well as collecting and recycling home appliances and information and telecommunications electronics. 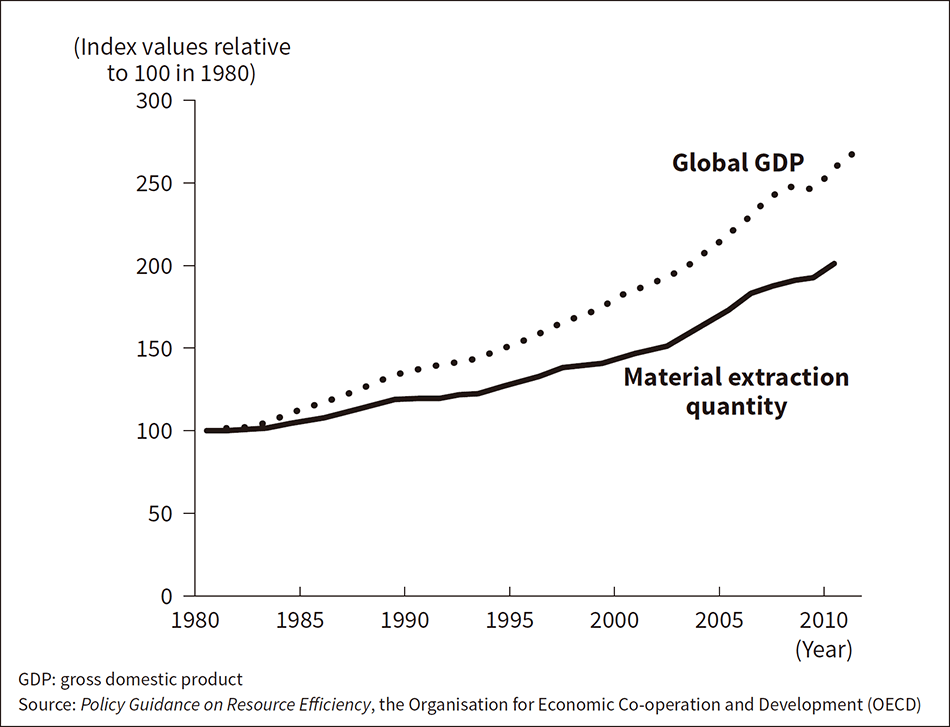 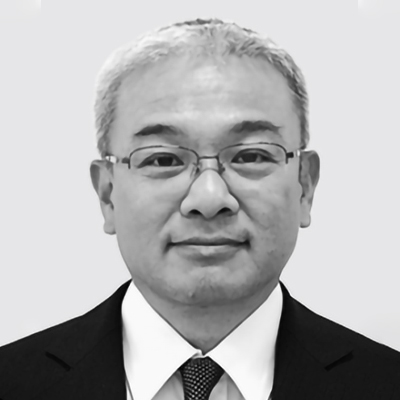 Figure 1 — Progress of Decoupling between Material Consumption and Economic Activities

The growth in consumption of the world’s material resources is slowing relative to GDP growth.

Creating a highly resource-efficient economy is a vital requirement for reducing environmental impact and sustaining economic growth. As shown in Figure 1, global materials extraction has grown along with global gross domestic product (GDP) since 1980. While the graph indicates that materials extraction growth has not kept pace with GDP growth, the future does not look bright given that the current global population of 7.7 billion is expected to grow to 9.8 billion and per-capita income to roughly triple by 2050. Statistics show that the annual per-capita consumption of materials by the Organisation for Economic Co-operation and Development (OECD) member countries is 60% higher than the world average. Given these statistics, the prospect of worldwide production and consumption approaching OECD levels in the years ahead creates concern about the resulting rise in demand for energy and natural resources.

Hitachi has responded to these issues by creating an Environmental Vision that includes three goals: (1) a low-carbon society, (2) a resource-efficient society, and (3) a harmonized society with nature. This article takes a close look at how Hitachi is working on resource recycling to attain the second of these goals. The section below presents statistical data illustrating the state of resource recycling in Japan. It is followed by a discussion of the major areas that Hitachi is working on.

The 2030 Agenda for Sustainable Development adopted by the United Nations in 2015 is centered around a set of Sustainable Development Goals (SDGs). The inclusion of Goal 12 (Responsible Consumption and Production) in the SDGs indicates that effective use of resources is a common worldwide issue. Work on the ‘3Rs’ (reduce, reuse, recycle) is a key requirement for making progress on solutions to this issue.

Japan began working seriously on resource recycling in 1991 when the Act on the Promotion of Utilization of Recyclable Resources went into effect. The basic approach to the 3Rs was later set forth by the Basic Act on Establishing a Sound Material-Cycle Society in 2001. As shown in Figure 2, these laws more than quadrupled the recycling rate—from 4.5% in FY1989, to 20.3% in FY2016. As shown in Figure 3, the resource recycling rate has consistently risen nearly every year since FY1990. An improvement of 40 to 50% from the roughly 10% level of FY2000 is being targeted, with a goal of about 17% for FY2020. Among overall resource recycling, Figure 4 shows the recycling rate for just home appliances among manufacturers and other supply chain participants over the past several years. The FY2017 recycling rates for the major home appliances all exceeded the recycling standards set forth in the Act on Recycling of Specified Kinds of Home Appliances (‘Home Appliance Recycling Law’). The numbers are as follows: 92% for air conditioners, 73% for cathode-ray tube (CRT) televisions, 88% for liquid crystal display (LCD) and plasma televisions, 80% for refrigerators/freezers, and 90% for clothes washers/driers. These statistics indicate that work on the 3Rs has progressed steadily over the past few decades in Japan. 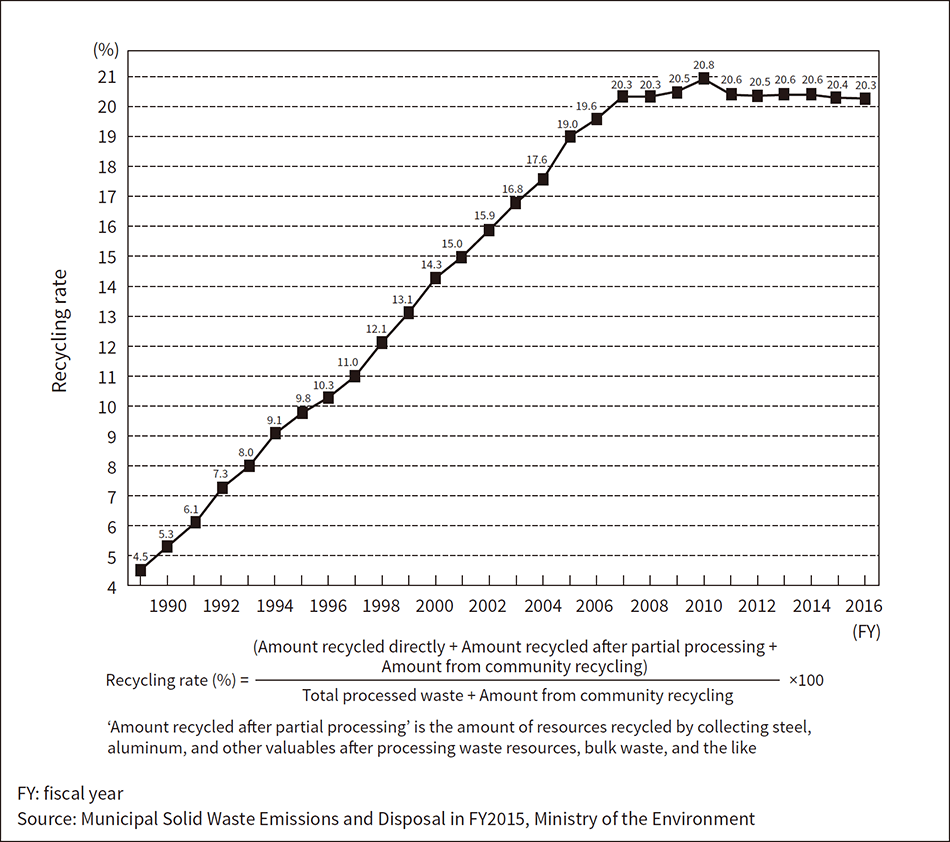 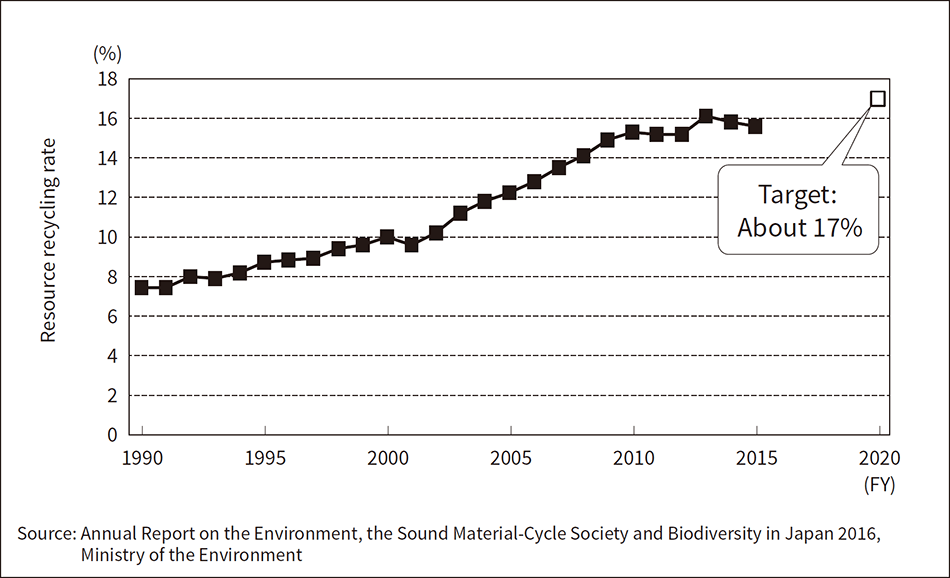 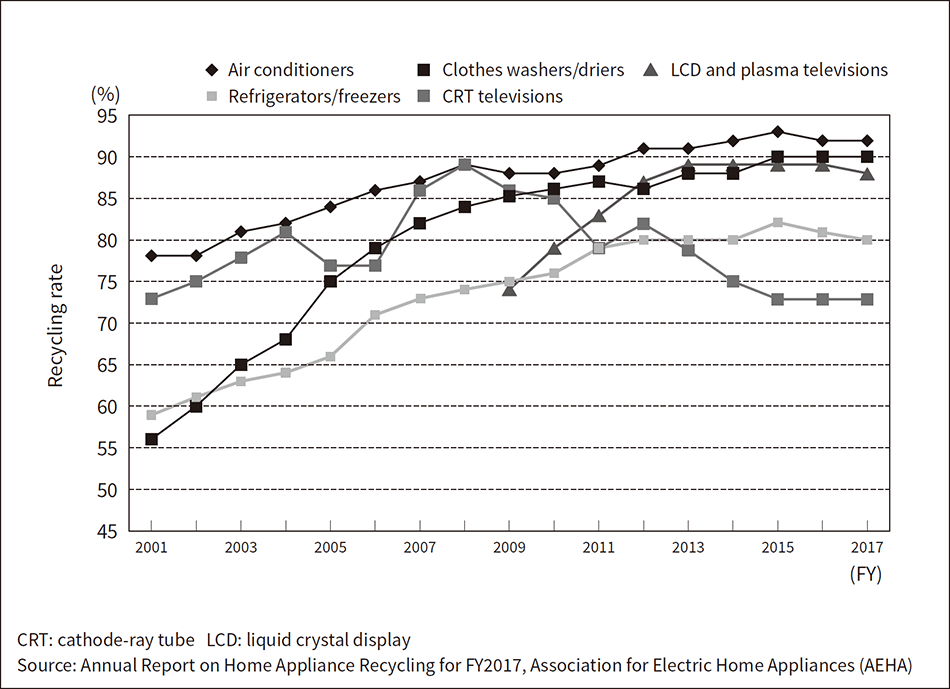 Along with the 3Rs mentioned above, Hitachi is also working on refurbishing and remanufacturing—areas it views as important activities for helping create a circular economy. Refurbishment is the process of servicing used products to restore them to a ‘like new’ state, while remanufacturing is the process of making used products the same as new through disassembly, cleaning, parts replacement, and the like.

This section presents some specific examples of Hitachi’s work on resource recycling, looking mainly at work on the 3Rs, refurbishment, and remanufacturing. More in-depth discussions of each example can be found in the articles in this issue.

Hitachi Construction Machinery Co., Ltd. collects used components from construction machinery and replaces some of their internal parts to remanufacture them as components with the same quality and performance as new components. This business area helps increase client satisfaction by rapidly repairing failed parts and reducing repair costs. By reusing used parts, it also greatly reduces industrial waste and helps reduce environmental impact. These benefits received official recognition in 2018, when the company won the Award of the Director-General of the Industrial Science and Technology Policy and Environment Bureau at the Awards for Resources Recirculation Technologies and Systems given by the Resource Recycling Promotion Center of the Japan Environmental Management Association for Industry. It also won the 3Rs Promotion Council President’s Prize category of the 3Rs (Reduce, Reuse, and Recycle) Awards given by the 3Rs Promotion Council.

Hitachi Automotive Systems, Ltd. collects alternators and starters (automotive electrical parts) from automobile dealers and repair shops, and rebuilds them to restore the same appearance and functionality as genuine parts in pristine condition. This business area involves a large mix of parts that are each handled in small quantities, so the work must be done manually. It is handled by cross-trained workers with advanced skills. The company’s rebuilding work received official recognition for its contribution to the high-quality reuse of automotive electrical parts over the past 25 years when it won the Award of the Director-General of the Industrial Science and Technology Policy and Environment Bureau at the 2016 Awards for Resources Recirculation Technologies and Systems given by the Resource Recycling Promotion Center.

Hitachi is working on creating a scheme for recycling plastics from used home appliances within the group. This work has included activities such as devising special techniques for creating a supply chain for high-quality plastic recyclables, and reviewing product design and manufacturing operations. These efforts have enabled more use of recycled polypropylene materials in Hitachi refrigerators. By FY2018, the recycled polypropylene content of Hitachi refrigerators had risen from about 20% to about 50%. The company plans to continue these activities to make further improvements in the rate of recyclables used.

Hitachi recycles information and telecommunications electronics such as hard disk drives. The drives are first decommissioned to prevent information leakage, then rare-earth metals (such as neodymium) are extracted from them for resource recycling. Figure 5 shows a recycling plant (left) and disassembled hard disk drive parts (right). The work done by Hitachi Industrial Equipment Nakajo Engineering (Nakajo EG) in this area has been officially recognized by the Waste Reduction Recycling Sectional Meeting of Niigata Environment Meeting, who awarded it their 2017 Niigata Prefecture Excellence Recycling Establishment Commendation. Nakajo EG also shared an award with Tokyo Eco Recycle Co., Ltd. when the companies jointly won the Ministry of Economy, Trade and Industry (METI) Minister’s Prize category of the 2018 3Rs (Reduce, Reuse, and Recycle) Awards given by the 3Rs Promotion Council.

These stark statistics show that the world’s limited resources have to be recycled if the planet’s population is to enjoy lifestyles of abundance in a sustainable manner. Resource recycling can only succeed with help from producers, consumers, and all the other stakeholders involved with it. Through efforts such as the examples presented in this article, Hitachi will continue to honor its responsibilities as a resource recycling stakeholder.