Work on Resource Recycling in Hitachi

Malfunctions or failures in construction machinery take considerable time to restore since the problem parts need to be removed at the site, transported to the service shop, and then disassembled and repaired. While replacing problem parts with new parts results in high repair costs, and the old parts end up as industrial waste. Remanufactured parts provide a way to solve these issues. The same quality and performance as new parts can be achieved by removing the used parts from the machinery and taking them to a remanufacturing plant for replacement of the inner parts that need replacing. This approach enables machinery to be rapidly restored, lowers repair costs, and reduces industrial waste. Parts remanufacturing is an area that Hitachi plans to refine in the years ahead as a way to further reduce environmental impact, boost profitability, and pursue a more globally oriented approach to business. 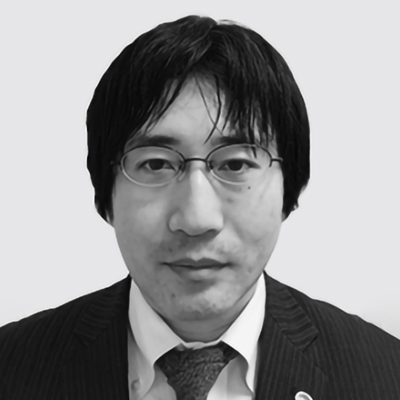 Construction machinery is currently in widespread operation under harsh conditions around the world, and is crucial equipment for applications such as urban development and resource development. Construction equipment that fails and stops working can shut down an entire site, so being able to rapidly restore machinery under any circumstances is a key requirement for construction machinery manufacturers who want to improve customer satisfaction.

The standard approach to restoring machinery is to remove the broken large components (such as engines, hydraulic cylinders, and motors), have them repaired at a service shop, and then transport them back to the machinery again for reattachment. The process from identifying the broken items to obtaining the parts needed for repair is time-consuming, making it difficult to restore machinery rapidly. The alternative approach of replacing the broken large components with new ones can greatly reduce machinery restoration time. But since new parts are generally expensive, this approach is not favored by customers looking for low-cost repair, and the replaced parts end up as industrial waste.

Remanufactured parts are sold to customers at prices that are 60 to 70% of new parts prices, reducing repair costs, and replacing large, broken components on-site greatly reduces machinery restoration time, so they play an important role in improving customer satisfaction. Re-using broken parts also greatly reduces the quantity of industrial waste and has been recognized for its ability to help reduce environmental impact. For example, in 2018, Hitachi Construction Machinery Co., Ltd. won the Award of the Director-General of the Industrial Science and Technology Policy and Environment Bureau at the Awards for Resources Recirculation Technologies and Systems. Also that year, it won the 3Rs (Reduce, Reuse, and Recycle) Promotion Council President’s Prize category of the 3Rs Awards.

Used parts are collected and subjected to processes such as disassembly and inspection before being reworked into parts with the same performance as new parts. 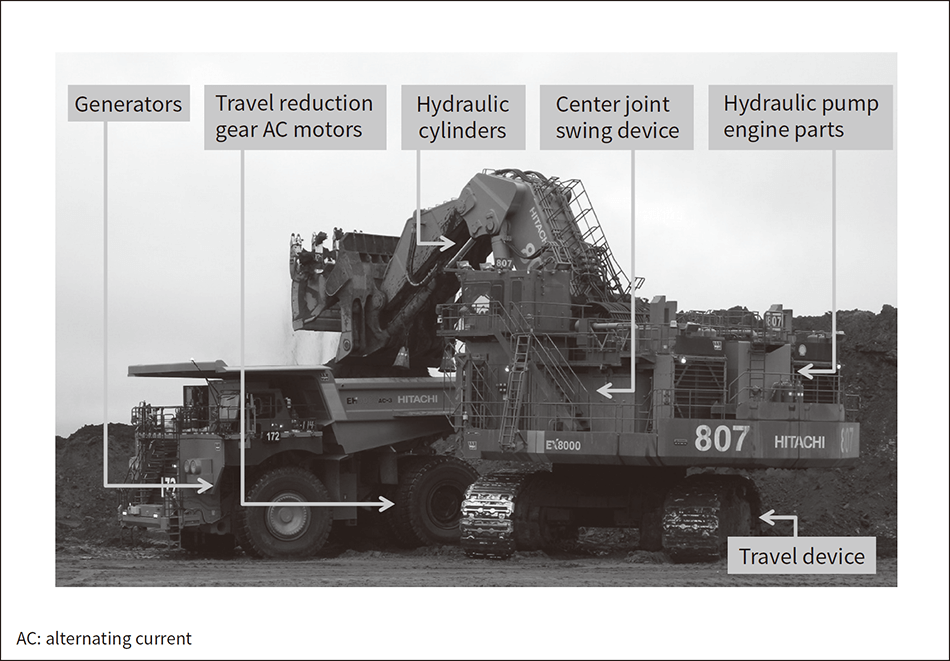 Listed here are the major construction machinery components that are supplied as remanufactured parts.

Ultra-large excavators and dump trucks have parts that are each very large and very heavy. Dump truck travel reduction gears are the heaviest items handled as remanufactured parts, weighing 12 metric tons. This weight is equivalent to the weight of 12 or 13 standard vehicles of the Japanese kei car category (light automobiles). Remanufacturing such large components provides major benefits for saving resources and reducing waste. The Hitachi Construction Machinery Group also has a large portfolio of other technologies for reusing parts without discarding them, greatly reducing the volume of scrap. Overall, the group’s remanufacturing business reduces waste by about 2,900 metric tons per year(1).

Remanufacturing has so far not been actively pursued in countries and regions without manufacturing plants. One reason is that after selling remanufactured parts in these areas, the cost of collecting used parts from other countries causes unavoidable price increases from expenses such as transport costs and tariffs. The idea that reusable parts must be returned has also not taken root among customers in these areas.

As a first step to overcoming these obstacles and enabling a worldwide supply of remanufactured parts, Hitachi Construction Machinery has teamed up with a logistics company with a global presence to work on creating a system for collecting used parts in other countries. For example, it started the following system for use when Japanese-made remanufactured parts are supplied to the European market: The used parts to be collected are collected from each agency and the part quantities are managed by Hitachi Construction Machinery Group’s European headquarters. The parts are then transferred to the logistics company and are returned to Japan in shipping containers en masse to reduce transport costs. The Group’s remanufacturing work in southeast Asia is being done on an outsourced basis. Here, it has signed an agreement with a logistics company to collect used parts from countries where remanufactured parts have been sold, and return them to remanufacturing plants.

Customers demand remanufactured parts that are low-cost and offer the same performance as new parts. To meet this demand, the same parts must be continually used and remanufactured repeatedly to lower manufacturing costs. But, continually using the same part repeatedly creates a dilemma since it increases the risk of the part becoming damaged during use from stresses such as metal fatigue, making it increasingly difficult to maintain the same performance quality provided by a new part. Hitachi Construction Machinery is working on a two-fold approach to solving this issue. One way is by developing processing and repair technologies. The other is by improving the accuracy of reuse assessments.

Parts used for extended periods can develop wear and small cracks. Since reusing parts in that condition leads to the risk of machinery failures, there are many parts that have to unavoidably be scrapped for even small amounts of wear or cracking. Developing processing and repair technologies to enable the reuse of these parts has been a major challenge. The company is currently working on developing these technologies in line with a development roadmap. It has succeeded in increasing the number of reusable part types, lowering the manufacturing cost at remanufacturing plants worldwide, and creating remanufactured parts with the same functionality as new parts (see Figure 3). Some of the new technologies are still being developed or are being verified on actual equipment, so the company will continue aiming to perfect these areas to improve its processing and repair technologies.

There are some part types that have a gradually increasing risk of metal fatigue and other types of damage after extended use even when no changes such as wear or cracks are visible. Gear parts are one example. The risk of failure cannot be assessed from the appearance of parts like these, and there are no criteria for enabling a clear-cut assessment of their reusability. These types of parts have so far always been scrapped to ensure the quality of remanufactured parts. In response to this challenge, Hitachi Construction Machinery is currently working with research organizations such as the National Institute of Advanced Industrial Science and Technology (AIST) to develop technologies enabling highly reliably life prediction and reusability assessments. This work is being done by non-destructively examining structural changes and identifying changes in mechanical properties such as hardness and residual stress.

These research and development efforts will be key in reducing industrial waste and helping create a circular economy. Their completion is eagerly awaited.

Hitachi Construction Machinery Co., Ltd. has devised ways of enabling longer safe use of the same part by investigating failure frequency and cost-effectiveness to set a priority order.

The years ahead should see increasing efforts to create a circular economy on a global scale, as demonstrated by moves such as circular economy policies starting to be incorporated into the legal system in Europe. This trend will result in manufacturers playing an increasingly large role in remanufacturing work consisting of collecting used parts and turning them back into products. Specifically, the need for stable supplies of remanufactured parts is expected to become more widespread among the countries and regions of the world than at present. Since remanufactured part sales involve more than just sales of cheap parts, an increase in the remanufactured parts supply will result in a corresponding increase in the number of used parts that must be collected from countries and regions around the world. But the worldwide infrastructure needed for reliable parts collection is currently still inadequate. A centralized management system to keep track of how many uncollected parts exist in each country and region will need to be created in the future. To continue providing remanufacturing in a stable manner, remanufacturers will also have to ensure that their products remain appealing to customers as well as using resource recycling and environmental preservation as selling points. Hitachi Construction Machinery wants to work on measures designed with the customer’s needs in mind, namely-cutting manufacturing costs to enable low-cost remanufactured parts supply, ensuring the same quality as new parts, and making each remanufactured part available right away whenever needed.

The remanufacturing work discussed in this article consists of collecting used parts from construction machinery operating on sites, reworking them into parts with the same performance as new parts, and selling the reworked parts. There is only so much that a single company can do to provide remanufacturing on a global scale while keeping it competitive amid the new paradigm of the circular economy. By drawing on Hitachi’s technologies, expertise, and supply chain, the company will continue to provide remanufacturing in the years ahead, approaching it as a far-ranging business encompassing a diverse set of elements.

1)
Hitachi Construction Machinery Topics, Global Development of Parts Remanufacturing Business Wins Award of the Director-General of the Industrial Science and Technology Policy and Environment Bureau at the “Awards for Resources Recirculation Technologies and Systems,” (Oct. 2018) in Japanese.