Since 2010, Hitachi has been using the Japanese boy idols “ARASHI” in their home appliance advertising campaigns primarily using traditional mass media such as TV commercials, newspapers, and magazines. However, in recent years, the places where customers, mainly young people, view ads has shifted rapidly from conventional media to digital fields such as personal computers and smartphones. For this reason, it was necessary to review its advertising methods and places where they come in contact with customers. So, Hitachi Global Life Solutions, Inc. developed an original virtual character (virtual YouTuber: VTuber) that uses YouTube, which has the largest number of viewers and social impact in the digital field. The company plans to disseminate information through this new form of communication centering on younger people. Through this initiative, the character “Shirokaden Hakushaku” was born. 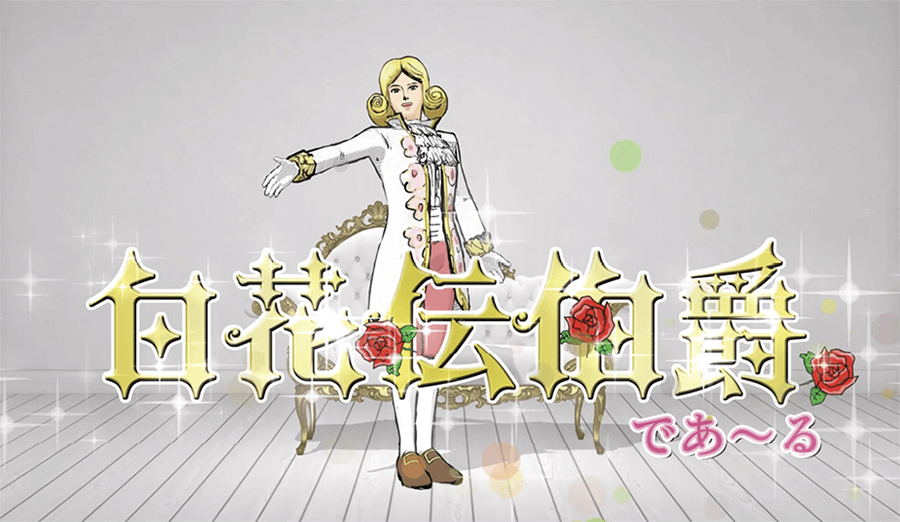 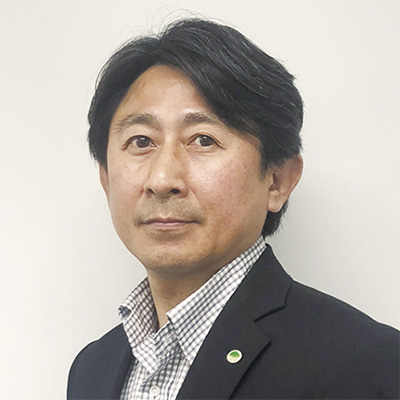 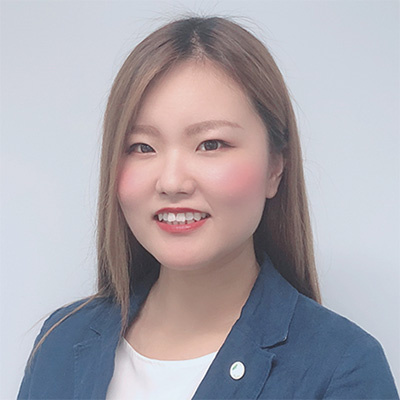 In developing the character, a young advertisement staff member in his/her twenties called a “digital native” who uses YouTube*1 on a daily basis was involved. First, prototypes for about 30 characters based on animals, yuru-charas (mascot), and humans were created. Then the character was chosen among the prototypes based on the following conditions.

Fulfilling all of these conditions, “Shirokaden Hakushaku” was chosen. “Shirokaden Hakushaku” is the character’s nickname, “Hakushaku” means “earl.” The design at the time of selection was a hand-drawn illustration of a young man in a white coat, and Hitachi Global Life Solutions, Inc. (Hitachi GLS) was planning to change it to a realistic design after the selection, but it received opinions that the hand-drawn design would be unique, so it decided to use the hand-drawn design as is (see Figure 1). At this time, Hitachi GLS came up with the idea of changing the character to a realistic design once 1 million channel subscribers are achieved. 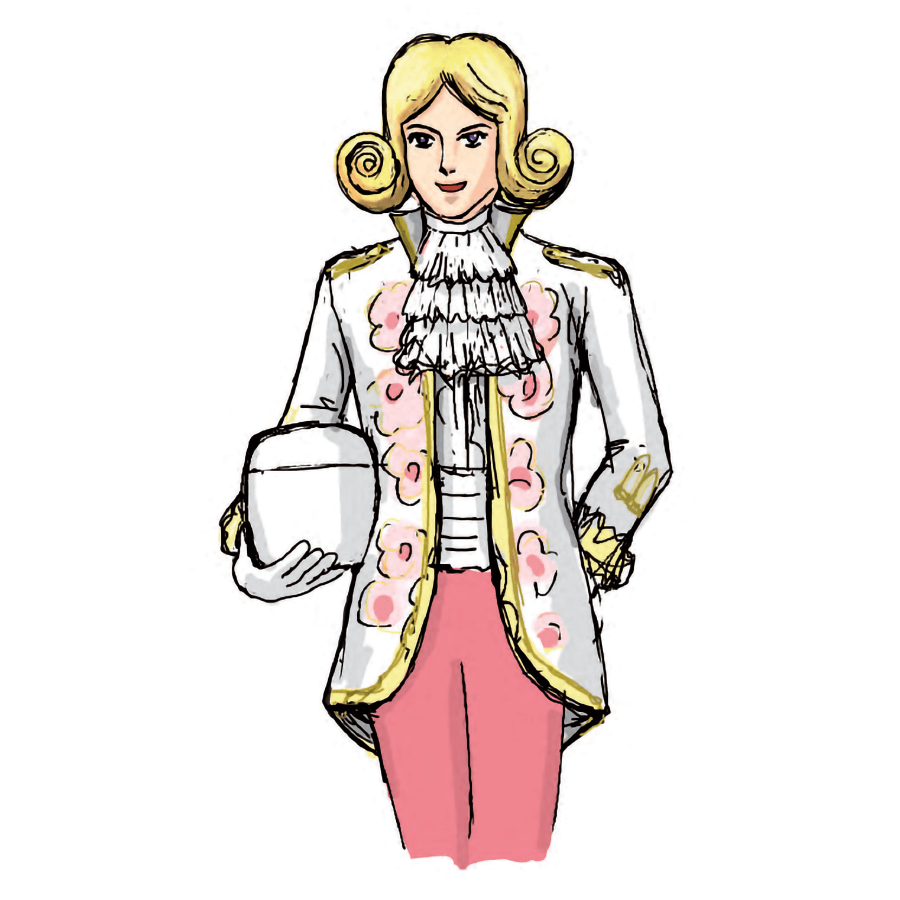 The rough draft was supposed to be redrawn into a realistic design, but the unique hand-drawn features were incorporated, and the final design was made up substantially from the hand-drawn design.

1.2 Deciding on the “Person Inside” (Performer) 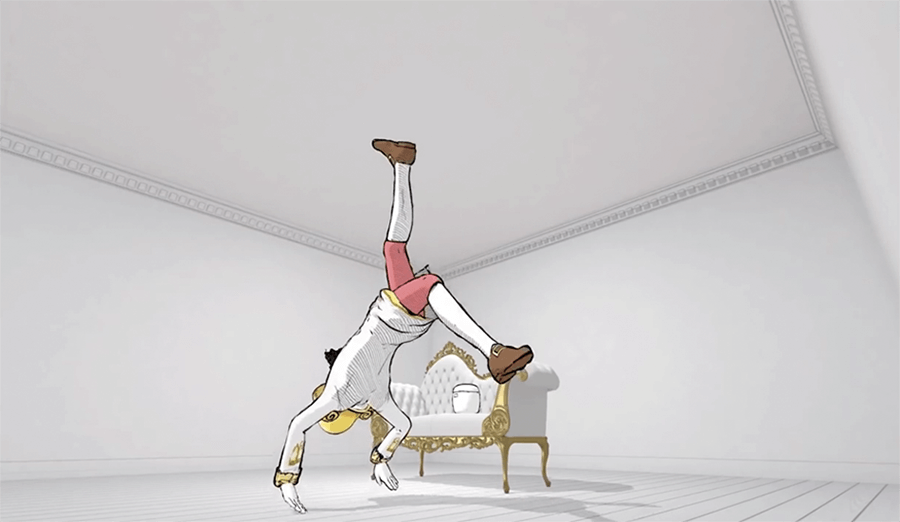 Virtual YouTubers require a “person inside” (performer) to capture the movements and facial expressions of real humans using motion capture technology and then apply them to two-dimensional and three-dimensional (3D) computer-generated characters used for vlogging. In order to find the appropriate person to fit the appearance of the previously chosen “Hakushaku” character, Hitachi GLS conducted an audition with several candidates. For the audition, it evaluated how well the candidates could express the set phrase of “Kadeeeen!” (“home appliances”) and acting ability while using home appliances. As a result, it found a performer/actor to play the “person inside.” The person selected was somebody very athletic and for that reason, acrobatic moves like handsprings were later added to the persona of Hakushaku (see Figure 2).

This section introduces the activities of Hakushaku since he made his debut as a virtual YouTuber on April 17, 2019.

In the memorable first vlog episode, Hakushaku talks about his background and how he became an official virtual YouTuber. He explains that he is a hand-drawn character and he calls for people to subscribe to his channel since he will change into a realistic character if the channel reaches 1 million subscribers. As a Twitter*2 account was created the previous week and announcements about the debut were disseminated in advance, the number of views on the day of the debut, which is usually said to be about 100 views, reached about 3,500 views. In addition, 1,156 people subscribed to the channel as well, making Hakushaku’s debut a pretty big success. There were also many retweets, and the hand-drawn design was regarded highly. Hitachi’s plan went exactly as it had hoped and Hakushaku gradually accepted his own appearance (see Figure 3).

In his memorable debut video, Shirokaden Hakushaku calls for people to subscribe to his channel so he can obtain over 1 million subscribers.

This episode was designed to capitalize on the attractive voice of Hakushaku. Utilizing realistic 3D audio recorded with a special binaural microphone, Hakushaku talks to the viewers as if he is whispering in their ears, from the left and right. After this episode was released, the number of subscribers increased, particularly among women, who now represent 64% of all subscribers (as of July 2019). By the way, the “person inside” (performer) of Hakushaku had not been revealed up to this point (see Figure 4).

In this episode, Hakushaku whispers into the ears of the listeners from the left and right. After this episode was released, the number of subscribers trended upward.
ASMR: autonomous sensory meridian response

This episode was designed to test whether Hakushaku, as Hitachi’s official virtual YouTuber, could answer questions relating to home appliances. Hakushaku was able to correctly answer questions such as the name of a Hitachi vacuum cleaner function and the position of the “smaller amount button” on a rice cooker, but he struggled on truly esoteric questions such as the name of the song and composer of the melody that plays when turning off the washing machine. With this episode, Hitachi was able to portray to viewers the image of Hakushaku as someone people can relate to, which is what they wanted. In addition to answering the quiz, which had a mixture of hard and easy questions, Hakushaku served his role well as the official virtual YouTuber of Hitachi by introducing refrigerators and microwave ovens (see Figure 5). 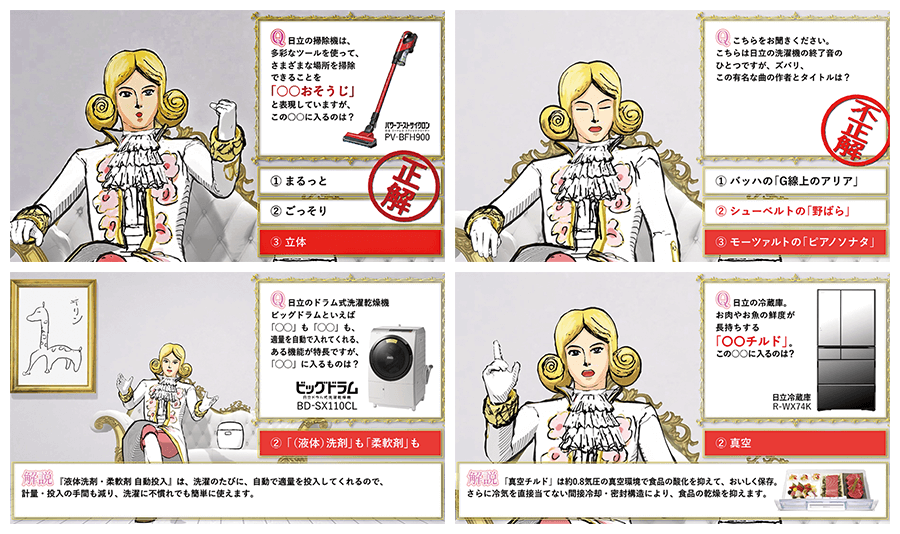 Four months have passed since the debut (August 2019) and the number of subscribers has progressed as planned, reaching 5,200. A virtual YouTuber is a form of next-generation communication that differs from traditional mass advertising and one-sided advertising. It allows viewers to enjoy advertisements together and can reduce the distance between companies and consumers. In addition, it is considered to have the potential to expand the advertising industry before the fifth-generation era arrives.

In the future, Hitachi GLS will continue trying to gain more channel subscribers and improve the popularity of Hitachi brands among young people by releasing attractive videos such as collaboration projects with other virtual YouTubers, Hitachi GLS company office visits, singing episodes, etc. The company hopes people will look forward to the activities of Hakushaku from here on.