In Japan, AC has been the dominant means of providing grid connections. Now, however, the installation of HVDC systems is increasing at a rapid pace around the world because the economical justifiability for using HVDC to strengthen grid connections has been demonstrated. This article describes the current state of the HVDC market focusing on VSC HVDC. 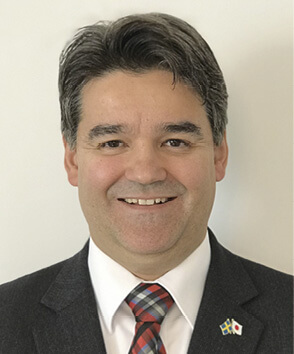 In the past, comparisons of alternating current (AC) with high-voltage direct current (HVDC) transmission as a means of providing grid connections have tended to opt for the AC option. Especially in Japan, HVDC has been seen as a last resort option only under special conditions, such as frequency conversion or transmission by subsea cable.

Now, however, the installation of HVDC systems is increasing at a rapid pace around the world, including in Europe, North and South America, and China etc., and the trend is accelerating (see Figure 1). From 2020 to 2025, the HVDC market is predicted to have a compound average growth rate (CAGR) of around 11%, more than three times faster than predicted growth in global gross domestic product (GDP).

Along with the increase in renewable energy capacity, growth of cross-regional electricity trading, and rising demand for a more reliable electricity supply, another factor behind this is that the economical justifiability for using HVDC to strengthen grid connections has been demonstrated by actual HVDC projects, as well as the cost-benefit analysis (CBA) conducted by entso-e*1. Rapid technical progress in voltage source converter-type HVDC (VSC HVDC) has also contributed significantly to this outcome. The maturing of VSC HVDC technology offers a variety of benefits to power grids that have made HVDC an effective option for strengthening grid connections.

This article describes the current state of the HVDC market with a particular focus on VSC HVDC.

Present and Future of the VSC HVDC Market

As of 2019, a global total of 39 VSC HVDC systems had been commissioned over the approximately 20 years since the first project commenced commercial operation in 1999. Cumulative capacity had exceeded 20 GW by 2019 and is expected to pass 30 GW during 2020 (see Figure 2).

In particular, cumulative HVDC capacity has grown rapidly due to the steady stream of new VSC HVDC systems with capacities of several hundred MW up to about 1 GW that have entered service since around 2014 when multi-level converter technology became widely applied to HVDC projects. This trend is set to continue beyond 2020, with an anticipated 35 GW or more of new capacity to come on line between 2020 and 2028. This is roughly double the new capacity added in the decade from 2010 to 2019.

A notable change in recent years has been that, whereas HVDC connections in the past tended to be used to connect different power grids, in many cases by subsea cables, there have been a growing number of cases recently where HVDC is installed within a single synchronous grid—where the AC option was usually chosen in the past—or where HVDC systems have been built to operate in parallel with existing AC grids. These facts show how HVDC can solve a variety of challenges in grids, and also in the growing number of cases where HVDC has a competitive edge over AC options.

In other words, rather than only being used for a limited range of applications where special conditions apply, as in the past, HVDC has become a widely used option for a more diverse range of situations.

One of the reasons why VSC HVDC has seen such a dramatic expansion in use over recent years is that it offers benefits for the stabilization of existing AC grids.

There are potential risks of a variety of instabilities in AC grids, such as voltage or frequency instabilities, power swings, and transients. A variety of measures are adopted to prevent these from happening or to suppress them quickly when they do, including placing operational limits on transmission capacity or installing phase-modifying equipment, etc. Furthermore, many places, especially sites suitable for large renewable energy projects, are prone to instability due to vulnerabilities in existing local grids and a lack of short circuit capacity, meaning that greater penetration of renewables often requires additional measures to be taken to address these instabilities.

VSC HVDC doesn’t just provide a connection for the transmission of electric power, it can also help maintain or improve stability in existing AC grids, with an increasing number of instances where active use is made of this capability.

*2
Re-energizing a grid to restart it after an outage

One of the factors behind increasing use of HVDC is the way the technology for VSC HVDC has advanced and matured over the past 20 years. VSC HVDC can now provide capacities up to 3 or 4 GW. This means it can meet most application needs. Technological progress is also reducing the required land area and the electrical losses of AC/DC converter stations, thereby improving the overall economics of HVDC (see Figure 6).

VSC HVDC has a major role to play in the increasing penetration of renewable energy around the world while also helping to improve grid stability.

In Japan, meanwhile, given the significant potential for wind power in Hokkaido and along the Japan Sea coast of Tohoku, and the fact that photovoltaic and other forms of generation have in some places already been forced to adopt output curtailment, the installation of increasing amounts of renewable energy capacity will create a need in the near future to transmit this energy to big demand areas.

VSC HVDC offers an effective solution to these challenges, having the ability not only to transmit renewable energy to demand areas, but also to deliver a variety of benefits to the grid.