Research and Development of Annealing- and Gate-based Quantum Computers 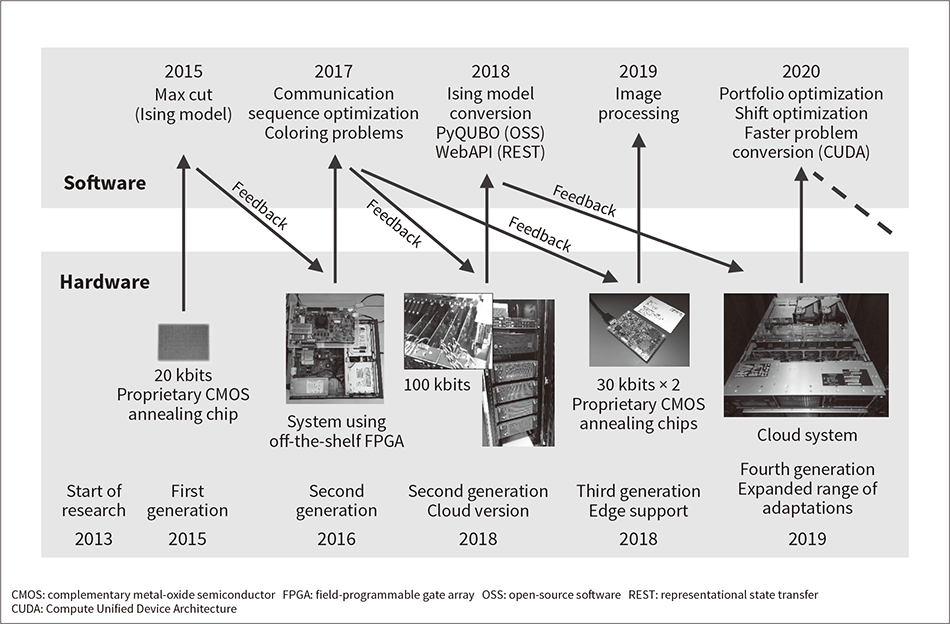 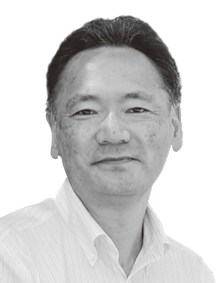 Quantum computers are starting to be seen as a very promising cutting-edge technology rivaling artificial intelligence (AI). Quantum computers have the potential to bring the world a “zero to one” change, but what do they mean for the proprietary hardware development in Hitachi’s Social Innovation Business? Many of today’s trendsetting IT companies have recently started shifting their value chains away from horizontal specialization and toward vertical integration. While services are at the center of this trend, hardware’s role as a delivery box or method for bringing the services of these companies to their customers also makes it key in building advantageous customer relationships. Investment in proprietary hardware development is being directed to both edge and cloud applications, perhaps due in part to the commoditization of services, solutions, and applications. Companies are showing a strong commitment to focusing only on customer satisfaction level. They are bridging the barriers between hardware, software and services, and even the barriers between industries. Existing companies and intermediaries are facing a digital disruption as a result. While trendsetting IT companies still have some ground to cover in the development of quantum computers, research and development (R&D) rooted in customer satisfaction level is now underway.

These trends serve to reaffirm the idea that the role of the new computer development work in Hitachi’s Social Innovation Business is to develop products useful for providing better solutions to customers. Therefore, the quantum computers being developed by Hitachi should be compared to existing classical computers currently providing solutions instead of to the quantum computers of competitors.

As described above, Hitachi sees the role of its computer development work as creating products that are useful for providing better solutions to customers. Being able to handle large-scale or other problems unsolvable with today’s classical computers is the objective of quantum computer development. Barriers such as computational explosion make efficient computation of many of today’s problems impossible in practice when they are expanded to large-scale problems. These problems are handled by computing approximations over a manageable range, or are solved by reducing the scale of the problem and using the reduced-scale solution as a proxy for the solution actually being sought. Hitachi’s annealing-based quantum computer and gate-based quantum computer initiatives are each described separately below.

R&D on new computers useful for providing better solutions to customers started with the inception of a new-generation computing project at Hitachi Central Research Laboratory (as it was then known) in July 2011. In May of the same year, Canadian quantum computing company D-Wave Systems Inc. had announced D-Wave*1 One, calling it the world’s first commercial quantum computer. As the news spread rapidly worldwide, it also became clear that the product differed from the textbook definition of a quantum computer. It was an annealing-based quantum computer, a type specialized for a particular type of problem (combination optimization problems). Its short quantum coherence life*2 also resulted in many commenters criticizing it for failing to increase speed using quantum computations. Meanwhile, Hitachi felt that even without the use of quantum effects, there might be a better way to solve combination optimization problems than with classical computers. In 2013, the company started R&D on a complementary metal-oxide semiconductor (CMOS) annealing machine. These devices are known today as quantum-inspired computers. Hitachi played a key role in pioneering them.

Figure 1 shows the flow of development done on the CMOS annealing machine to date. Software/hardware co-design (tick-tock development model) is the key to developing equipment useful for providing better solutions to customers. Customer operations can be plugged into a model that can be solved by the CMOS annealing machine, or operations that the CMOS annealing machine can apply can be found. However, these approaches become substitutes for existing solutions when the customer operations are existing operations, which makes market entry difficult. Similarly, even bringing a problem’s solution time down from 1 second to 0.01 second (for example) will not result in major benefits from the new performance value or in customers eager to install CMOS annealing machines since the existing performance value was still good enough. An effective method for overcoming this state of equilibrium is to perform several repeated cycles of concrete proof of concept (PoC) and proof of value (PoV) demonstrations using the new hardware, followed by feedback of the results to develop the next hardware and software and the applications using them. To accomplish this objective, Hitachi’s system engineers play an active role in CMOS annealing machine development. They have worked with customers to run PoCs and actual demonstration tests of non-life insurance portfolio optimization(1). The spread of COVID-19 has resulted in close contact being avoided as research activities continue at the Central Research Laboratory. So, researchers working with CMOS annealing have worked on production in shifts, tailoring working hours accordingly when demonstrating application benefits. These activities led to the release of a work shift optimization solution being announced in 2020(2).

*1
D-Wave is a registered trademark of D-Wave Systems Inc.
*2
The amount of time that the coherence state (a type of quantum effect) can continue being maintained.

Illustrated here are the obstacles facing the creation of general-purpose quantum computers as set forth in 2019 by John Preskill, Professor of Theoretical Physics at the California Institute of Technology.

Hitachi has developed basic array technology that merges fundamental quantum physics with large-scale semiconductor memory control technology to control a large number of silicon quantum dots arranged into a two-dimensional state on a semiconductor chip. A demonstration of its operation showed that “quantum dots” serving as boxes enclosing single electrons can be formed in a two-dimensional array state at the desired positions. The technology was also shown to improve the operation voltage margin by an order of magnitude relative to the previous structure, helping pave the way to large-scale stable operation of quantum dots. 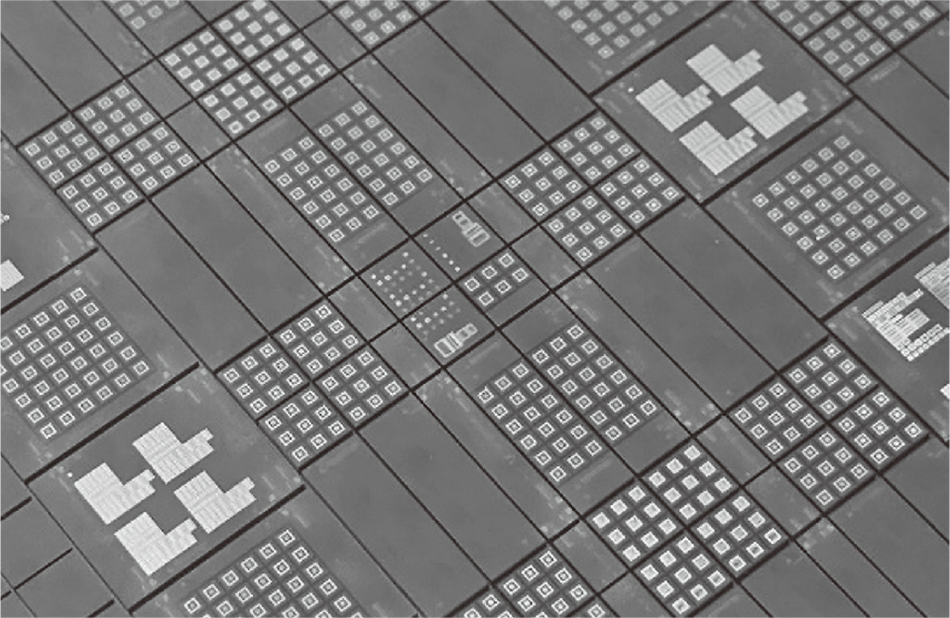 Figure 2 shows the obstacles facing the development of quantum computers as outlined in 2018 by John Preskill, Professor of Theoretical Physics at the California Institute of Technology. The first obstacle is known as quantum supremacy, which requires that quantum computers surpass the performance of classical computers for certain algorithms irrespective of usefulness. This obstacle was overcome by Google LLC in 2019(3). While this achievement represents an important R&D milestone, the developed quantum computer’s value to industry and consumers is still unknown. The next of Preskill’s obstacles is known as quantum advantage, which requires that quantum computers surpass the performance of classical computers in an algorithm useful to industry or society. So far, no-one has overcome this obstacle. Overcoming the next obstacle to create the type of general-purpose quantum computer defined in textbooks could take many years. Meanwhile, what is known is that a type of quantum computer useful to industry and society could exist even before reaching that stage. This type is known as a noisy intermediate-scale quantum (NISQ) computer, which is a computer that excels at simulating quantum mechanical behaviors and handling high-dimensional data. It is expected to help speed up machine learning and assist the design of materials such as drugs and catalysts using multibody problems and other quantum chemistry computations closely related to quantum mechanics.

If the goal is to create equipment useful for providing better solutions to customers, then an NISQ device would certainly be the quantum computer to target. However, improvements to both the quality and quantity of quantum computers pose challenges for their creation. Hitachi has previously conducted fundamental physics research on silicon quantum bit elements at the Hitachi Cambridge Laboratory in the UK. This work has resulted in achievements such as highly accurate reading of spin states when reading quantum states(4). Competitors usually focus on improving quantum bit element completeness, adopting a bottom-up approach that prioritizes quality by progressively increasing the number of quantum bits to two, three, and more. While devices with over 50 quantum bits have been developed using superconducting quantum bits, creating an NISQ device that can overcome the obstacle of quantum advantage by extending this approach would clearly be difficult.

Hitachi adopted a major change in approach in FY 2018 when it decided on a top-down method diametrically opposed to the conventional method. The new approach aims to create a quantum computer designed to prioritize quantity from the outset by making maximally effective use of the outstanding integrability of silicon semiconductor technology that makes it possible to integrate a large number of elements having uniform properties. Quality is subsequently improved by researching methods of detecting and correcting surface symbol and other errors, and developing various technologies (two-dimensional quantum bit arrays also made possible by the high integrability of silicon, ultra-low temperature CMOS circuits/packaging systems, hot silicon quantum bits, and calibration/digital correction). In 2020, Hitachi used this top-down method to prototype the basic structure of a quantum bit array enabling the formation of 64 quantum bits(5). The prototype demonstrated that a quantum dot storing a single electron can be stably formed at a desired position in the array by using technologies such as narrow-pitch quantum bit/connection-control MOS formation made possible by a self-alignment process, and high-stability quantum bit formation using silicon on insulator (SOI) and intrinsic channels. Figure 3 shows an overview of the basic technologies used in the silicon quantum bit array. Figure 4 shows the chip used to prototype the basic structure of the quantum bit array. Hitachi is planning to use this array structure to work on demonstrating quantum bit operations, and to step up the pace of development on a silicon quantum computer enabling large-scale integration.

In 2020, Hitachi started R&D on a silicon quantum computer as part of the Moonshot Research and Development Program launched by Japan’s Cabinet Office. The company is also taking part in the IBM Q Network*3 project through the Quantum Innovation Initiative Consortium (QIIC) being promoted by the University of Tokyo and Keio University, and has started joint research on quantum algorithms using the IBM Q quantum computer developed by International Business Machines Corporation (IBM). Having set its sights on quickly overcoming the obstacle of quantum advantage, Hitachi is planning to continue work that bridges the barriers between hardware, software, and services.

*3
A group dedicated to refining quantum computing. Member organizations can use the IBM Q quantum computer via the cloud, and access quantum technology assets owned by IBM.

Some of Hitachi’s CMOS annealing machine achievements were obtained as the result of contracted work (JPNP16007) from the New Energy and Industrial Technology Development Organization (NEDO).