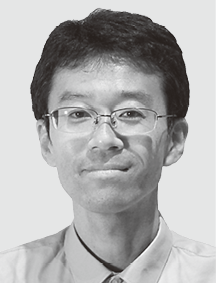 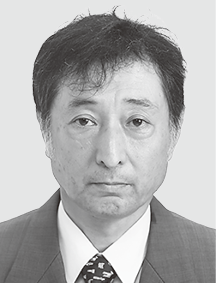 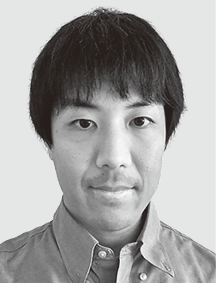 Today, climate change is causing severe water shortages worldwide. By 2050, it is predicted that the global population will have risen to approximately 9.7 billion people, roughly half of whom will be exposed to water shortages(1). In response to this, Goal 6 of the United Nations Sustainable Development Goals (SDGs) aims to “Ensure availability and sustainable management of water and sanitation for all”(2). Of the planet’s water resources, clean water that can be used by humans makes up only 0.5% of the total. Clean water is a recyclable natural resource, and its efficient use is vital not only to address water shortages, but also to address other social problems such as resolving conflicts over water, addressing poverty, and improving living environments(1), (2).

Currently, the water leakage ratio in various cities and countries around the world varies greatly from about 3% in Tokyo and Fukuoka City, to over 50% in certain cities(3)-(6). The main causes of water leakages include the corrosion of water pipes and the deterioration pipe joints due to pressure. These problems occur more frequently for aging pipes installed a long time ago. When a water leakage occurs, a vibration sound is emitted from the leaking location. This sound is propagated into the surrounding area while being attenuated via a medium such as the water in the pipe or the pipe walls(7). The conventional method for inspecting water pipes involves an experienced maintenance worker patrolling the pipes and determining whether the vibration sound is present using a listening stick. Since water pipes must be patrolled over a long distance, in many regions, inspections can only be performed once every several years, making it difficult to prevent water leakages in advance(8).

This system visualizes the condition of underground water pipes, which was not previously possible. This is a part of the digital transformation (DX) of water pipe maintenance, shifting from patrol inspections by experienced workers using listening sticks, to the discovery and repair of water leakages via permanent monitoring. The shift from time-based maintenance (TBM) based on the number of years since installation and the experience of expert workers to condition-based maintenance (CBM) based on data will increase the service life of water pipes, optimize repair planning, and reduce maintenance costs. Such measures enable water supply infrastructure to be used more efficiently and help realize sustainable urban life.

Compared to the highly sensitive vibration sensors used in in-vehicle units or smartphones, or for special applications such as resource exploration, the developed sensor achieves both low noise density and relatively low sensor power. 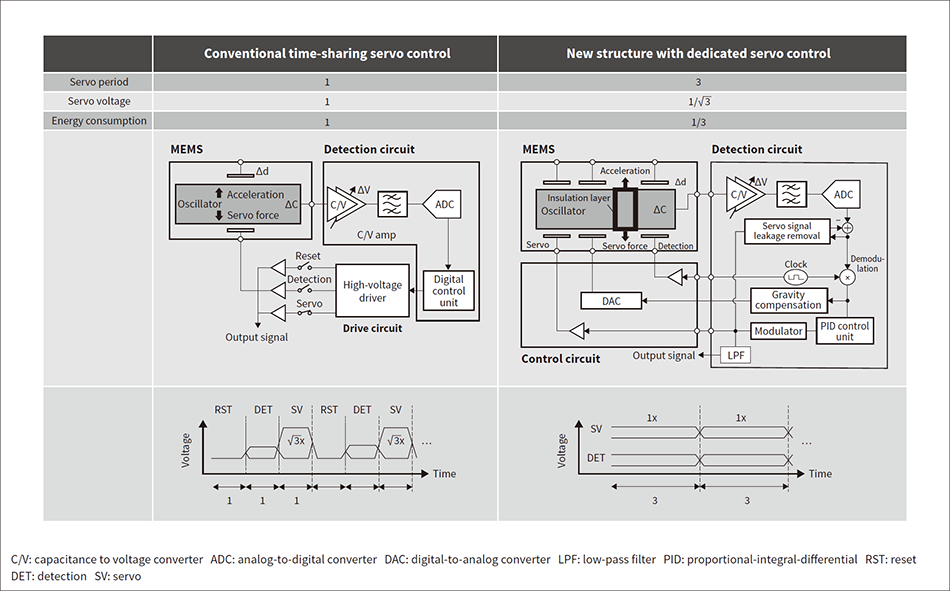 With multiple electrodes, servo control and detection control can be performed simultaneously, reducing the servo signal voltage and energy consumption.

To perform remote monitoring using water leakage detection sensor terminals permanently installed on water control valves that do not have a power supply, the sensors must have batteries, and these must operate for a long time. Conventional high-accuracy MEMS vibration sensors perform time-sharing control that is split between vibration detection control and servo control to return the movement of the oscillator to its original state (see Figure 3). In this method, energy consumption is an issue because a high servo charge is applied to the oscillator in a short period of time.

In response, Hitachi developed a new MEMS structure with multiple electrodes to separate the detection signals from the servo signals. This enabled vibration detection and servo control to be performed simultaneously, reducing the power required for servo control to a third of the previous level. Sensor energy consumption was reduced to 17 mW, delivering battery operation for five years and enabling long-term water pipe monitoring.

Figure 4 shows an overview of the ultra-sensitive vibration sensor using the newly developed MEMS structure. The sensor is comprised of three integrated circuits (ICs): the MEMS, control circuit IC, and detection circuit IC. When exposed to vibration, the MEMS weight moves and the distance to the electrode (Δd) changes, which changes the MEMS capacity value (ΔC). The vibration is measured by converting this capacity value change into a voltage signal (ΔV). Then, servo control is used to return the MEMS to the stationary state.

Figure 4 also shows the main causes of noise density. Figure 4 (a) shows the MEMS mechanical noise that is generated when the MEMS weight moves and gas makes contact with the weight surface. Through-holes with different diameters are formed on the top and bottom surfaces of the weight, allowing the gas to escape and reducing resistance by about half. Figure 4 (b) shows MEM’s structural high-frequency noise, which is removed by adding a filter function to the modulator. Figure 4 (c) shows the servo signal leakage noise that occurs when the servo control signal leaks into the detection signal due to the MEMS structure. This issue is resolved by installing a new servo signal leakage removal circuit to replicate the leakage noise from the servo control signal, and then removing the replicated leakage noise component from the output signal of the analog-to-digital converter (ADC) that has both the detected vibration component and the leakage noise component.

Simply achieving a sensor noise density of 22 ng/√Hz does not necessarily mean that the sensor can detect water leakages. In urban life, a huge variety of environmental vibrations are caused by the activities of society, such as the movement of people, water used in homes, and the transformers at power plants or factories. Hitachi developed a water leakage detection algorithm that can judge whether water leakage vibration is present from measured vibration that is a mix of complex environmental and water leakage vibrations. This developed technology enables leakages to be detected without stopping the activities of urban society.

Demonstrations over the last few years have confirmed that the algorithm does not react to various environmental vibrations such as normally used water, sewage, railway cars, or human movement, and that these vibrations are classified as “No possibility of water leakage.” Furthermore, high detection accuracy can be achieved even in locations where patrol inspections by people is difficult, such as main roads with heavy traffic or near railroad crossings.

From June to December 2020, 14 underground water leakages were detected in areas prone to leaking and in noisy areas close to main roads under the jurisdiction of the Kumamoto City Waterworks and Sewerage Bureau. Figure 6 shows photographs from the demonstrations at this time.

Currently, Hitachi is conducting demonstrations with multiple governmental agencies and partner companies in Japan aiming toward the future deployment of this water leakage detection service, as well as the development of measurement technology to meet new needs that became apparent in the demonstrations and the promotion of more efficient maintenance for water supply infrastructure.

Hitachi also plans to expand the technology to many developed countries that suffer from the problem of aging pipes and to emerging countries that have high water leakage rates. The aim is to contribute to more efficient water pipe operations and maintenance by reducing the water leakage rate, cutting maintenance costs, and other measures. Emerging countries in particular are experiencing dramatic changes such as rapid urbanization, growing populations, and changes in the structure of their industries. Following these trends, Hitachi will contribute not only this water leakage detection service, but will also take a more comprehensive viewpoint that encompasses areas such as payment collection and social infrastructure facilities such as desalination plants and advanced sewage processing. These new systems will support the DX of social infrastructure and infrastructure operations and maintenance based on measurement technology with the goal of achieving sustainable urban life. 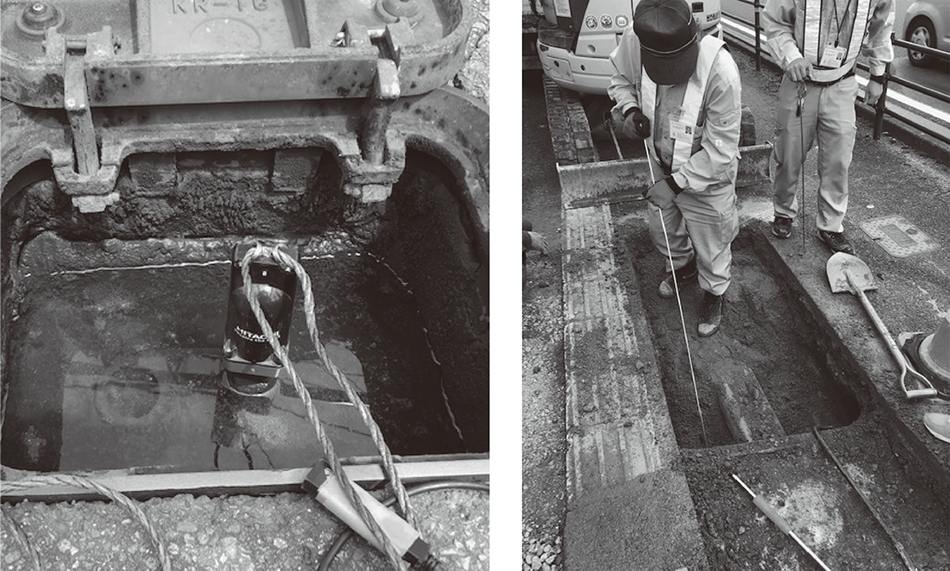 In a demonstration of the water leakage detection service at the Kumamoto City Waterworks and Sewerage Bureau, 14 water leakages were discovered.

This article has described a remote monitoring type of water leakage detection service that is aimed at improving the efficient utilization of water resources, as many regions around the world face water shortages.

Previously, water supply infrastructure could not be visualized, but a new service has been launched that enables such visualization using the measurement technologies of highly sensitive vibration sensors and a water leakage detection algorithm. The system built from IoT communication and cloud technology enables remote monitoring to discover water leakages. Currently, a social infrastructure maintenance showcase is operating at the Kokubunji site of the Hitachi, Ltd. Research & Development Group to promote the development of technology. In parallel, Hitachi is conducting collaborative creation with a wide range of partners both in Japan and overseas, such as governmental agencies, public utilities, ministries, engineering, procurement and construction (EPC) entities, and maintenance vendors. Their shared aim is to perform the DX of social infrastructure operations and maintenance using measurement technology to promote utility as a service (UaaS) as a means of contributing to the realization of sustainable urban life.