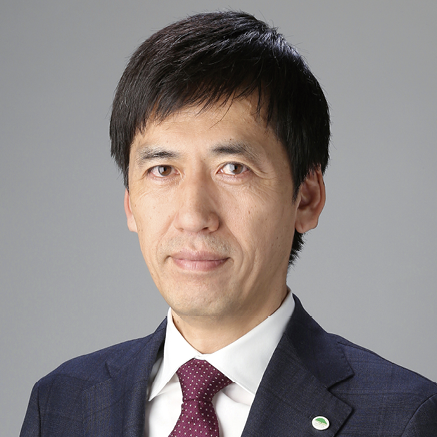 People and infectious diseases have a long history together. The first recorded epidemic occurred around 3,000 BC. The establishment of fixed settlements in the Mesopotamian region of the Middle East that accompanied the shift from a hunter-gatherer to an agrarian lifestyle and that led to people living in close contact with others as well as with livestock resulted in the increased spread of measles, already an endemic disease. Measles infections, which had previously been passed on sporadically between neighboring communities, began to spread worldwide as trade with distant places expanded. The disease has established a symbiotic relationship with people, having spread to all corners of the Earth over a period of millennia, along the way contributing to the decline of ancient Greek civilization and devastating the peoples of the New World.

Infectious disease has also brought changes to people’s lifestyles and to public institutions. In the case of the Black Death (bubonic plague) that spread through Europe during the Middle Ages, for example, trading vessels visiting from the east carried the disease back to their home ports where it subsequently ran rampant. While roughly one-third of Europe’s population fell victim to the disease, it is also said that the resulting shrinkage in the workforce drove up wages and this in turn raised people’s standard of living. Communities of peasants, seen as mere chattels of their estates, began to enjoy greater mobility, diminishing the power of the estates’ feudal masters and of the church. This trend expanded in the monetary economy that was accelerated by the inflow of cheap silver from the New World, and led to the emergence of the sovereign nations that became the foundations of modern Europe.

The transmission of infection is rapid in the bustling modern world of travel across countries and regions. The COVID-19 outbreak that started at the end of 2019 quickly spread around the world, becoming a pandemic just two months later. Nations have placed restrictions on people’s movements that include city-wide lockdowns and other rules against leaving the home. The result has been an economic downturn concentrated in service industries in particular. Restrictions on essential services have placed a sudden drag on purchasing behaviors. The pandemic can also be thought of as imposing a supply-shock recession (supply shock). In contrast to a demand-shock recession that comes about from people’s own reluctance to spend, supply shocks have a direct impact on people’s attitudes.

Just as the spread of infection has been extremely rapid, it is anticipated that, mediated by this supply shock, COVID-19 will also bring rapid changes to our lifestyles and public institutions. Although not a pandemic, the oil shock of the 1970s provides a past example of how a supply shock changes how people live. That period saw a rapid increase in the consumer price index brought about by the steep rise in the price of oil. As the economy went into recession, the world was reminded of the finite nature of its resources and concern spread about the limits of growth, including worsening environmental problems and economic disparities. This led to vigorous debate around the world on how to overcome societal challenges. Public awareness of energy and resource efficiency grew and countries everywhere pushed ahead with the introduction of environmental laws governing products and services, including the regulation of vehicle exhaust emissions.

However, this was followed by an acceleration in the movement and exchange of people, goods, and services across borders, and the global economy continued to expand, with emerging nations and regional development serving as the engines of growth. Industrialization and commercialization picked up pace around the world with a focus on efficiency and profitability, as if the limits of growth had been forgotten about amid all this expansion. I believe that the current pandemic serves as a reminder to us all of the importance of creating a sustainable society.

Societal Changes in the Post-pandemic World 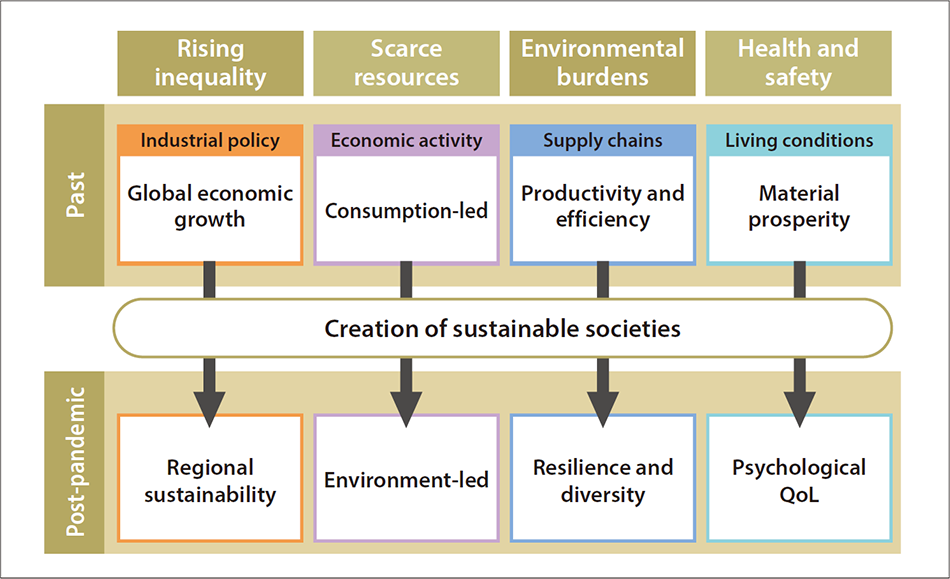 The spread of the pandemic is reminding us of “forgotten” societal challenges that include increases in economic inequality, the finite nature of global resources, the burden placed on the environment by the Earth’s limited ability to absorb carbon dioxide (CO2), and the maintenance of health and safety. Along with bringing changes to people’s lifestyles, this also marks the arrival of an era in which companies will increasingly be called on to contribute to creating a sustainable society.

Our business activities extend globally as we pursue economic and other forms of efficiency. In the post-pandemic world, however, a recognition of excessive focus on immediate returns (short-termism) is building momentum behind taking the long view on the reform of public institutions and the rebuilding of infrastructure (long-termism).

Hitachi operates its Social Innovation Business globally in the five sectors of Energy, Industry, Mobility, Smart Life, and IT. Along with the economics of its business operations, Hitachi is pursuing innovation in each of these sectors in ways that achieve balance with the social objectives of resolving long-term societal and environmental challenges. The following challenges, for example, take the form of trade-offs and are of particular importance with regard to how social infrastructure, corporate supply chains, and living conditions will change in the post-pandemic world.

How can infrastructure be designed for safety and peace-of-mind while also reducing the load on the environment and achieving operational efficiencies at a time when new entrants to industries such as mobility, energy, and financial services are making essential infrastructure services more diverse, with greater decentralization in the areas where individuals and companies live and engage in commercial activity? How can public institutions and technology be used to improve end user access to infrastructure services amid growing demand for cutting infrastructure costs in order to sustain corporate profitability and household finances?

Digital technology is accelerating the pace at which commercial and financial transactions are becoming more frequent and fine-grained, as well as being conducted in real time. And the establishment of regionally diversified supply chains is intended to eliminate the excessive dependence that development, procurement, and production activities have on particular regions. How then can the on-demand delivery of products and services be achieved when supply chains are becoming more diversified in terms of time and location? Similarly, in global corporate supply chains that are becoming more regionally diversified, how can progress be made on governance, on enhancing the ability to deal with compliance risk, and on adapting to the circular economy?

(3) Living conditions: Greater use of remote work and community engagement

How can we create an environment in which people can engage with one another socially and psychologically despite greater physical distancing and measures by local government and companies, to create more diverse workplace environments including working from home, shortened working hours, and crowd sourcing? At a time when promotion of tracking the activities of individuals for reasons of public health and social security and authorizing access in emergencies to healthcare information are topics of increasingly active debate, how can we combine greater public safety with reduced privacy risks?

While the progress of civilization gave rise to infectious diseases, it also encouraged the advance of technology. Once people made the transition to an agrarian lifestyle and started living in fixed settlements, it led to the emergence of city states. As populations continued to grow, dramatic increases were made in agricultural productivity through the spread of livestock farming, the use of implements to improve agricultural practice, and irrigation. Rising levels of surplus production spurred an expansion in trade and led to the invention of writing as a means of trade accounting and production management.

Technological innovation is intimately related to people’s survival instinct. Behind the advances in the technologies of steel and irrigation that began in Asia around the 10th Century were rapid rises in the inflow of people and natural population increases in coastal China, India, and the Middle East. Technological innovations in the fields of agricultural implements and weapons, earthworks, and the use of hydro power were also needed, both as a response to different ethnic groups increasingly butting up against one another and, in coastal, woodland, and desert regions where expanding the area under cultivation was unfeasible, as a means of increasing the production of food and other essentials and maintaining their standard of living. The intensification of competition between countries and the cooling of the European climate during the Little Ice Age were underlying causes of the Industrial Revolution of the 18th and 19th Centuries.

The spread of the pandemic is also likely to trigger people’s survival instinct. There are rising expectations for the emergence of innovative technologies that are in step with the major changes happening in people’s lifestyles and living conditions. Given the reminders of resource scarcity, our worsening environmental problems, and the preservation of health and safety, both natural and social science research into creating a better social environment that considers the civilizational context and social practices that shape people’s attitudes to consumption are important. I believe that life science is growing in importance in the broad sense that it addresses how humans live and their lifestyle behaviors. I also believe that there will be more call than ever in the future for research and development that combines science and technology with psychology and the study of social behavior, undertaken through advanced social experiments.

The regional diversity of technological innovation is also spreading more widely, I believe. In the Middle Ages, industrial technologies only served their purpose when established as human skills. You can think of it as technology and people being so closely intertwined that they were inseparable. However, with the mechanization of industry that occurred since the Industrial Revolution, this bond between technology and people has been broken as machines and systems have taken over as the means by which technology is replicated. Now, with modern advances in digitalization, the bond between technology and machines and systems is likewise being broken by the greater ease with which technology can be replicated in virtual environments. We are seeing an acceleration in the network-mediated allocation and exchange of “soft” resources associated with industrial technology, skills, and knowledge in ways that transcend distance. Along with this acceleration, we are seeing a growth in activity around the world involving work on technological innovations with diverse backgrounds that are rooted in the social environment and customs of different countries or regions. I believe we are entering an era in which companies will have a strong need to establish multi-regional and open research and development networks in order to grasp newly emerging technological innovations.