In order to achieve carbon neutrality by 2050, it is important to address the energy sector, which accounts for more than 80% of greenhouse gas emissions. To do this, nuclear power generation has become an option, and power companies are working to restart operations with safety as the top priority. As of March 2022, there are 33 nuclear power plants in Japan, excluding those that have been decommissioned. Ten of them have begun operations to restart. Meanwhile, 24 nuclear power plants are currently in the process of being decommissioned*1.

In this context, Hitachi Plant Construction is dismantling turbines as part of the decommissioning of Units 1 and 2 of the Hamaoka Nuclear Power Station operated by Chubu Electric Power Co., Inc, which were shut down in January 2009. Large equipment such as turbines are difficult to remove as they are, so they must be cut into pieces that are easy to remove from the building. However, this is the first time that Chubu Electric Power has decommissioned a plant, and at first, they were uncertain of what method to use to cut up the large equipment.

It was then that Hitachi Plant Construction, which had been involved in the construction and periodic inspection of Chubu Electric Power's nuclear power plants, was approached by the customer to assist in the dismantling of the equipment.

We asked Toshio Oohira, who currently works as the construction manager of the inspection work site, about the details of the proposal from Hitachi Plant Construction.
"For cutting large equipment such as turbines, we proposed a method using a large band saw, which had already been used at the Hamaoka Nuclear Power Station for the change out and scrapping of large equipment. A band saw is generally a device for cutting metal using a band saw blade, but the large band saw is a fireless cutting technology developed by Hitachi Plant Construction."

In the dismantling work of nuclear power plants, safe and efficient demolition is required to prevent exposure to radiation, spread of contamination by radioactive materials, and the outbreak of fires.
The large band saw we proposed can be operated remotely, thus avoiding the risk of worker exposure. Also, unlike other cutting methods, there is no risk of fire, since electricity is used to drive the motor to run the cutting saw.
In addition, this band saw cutting method allows work without the need for full-face masks, which are required for gas or plasma cutting methods, thereby eliminating the risk to workers of oxygen deficiency or heat stroke, making the work environment safer, and also providing advantages in terms of work efficiency.
Moreover, gas cutting is generally used for dismantling equipment, but there are concerns that radioactive materials melted by the torch could get into the metal being cut, potentially increasing the amount of radioactive waste.
Ultimately, Hitachi's large band saw cutting method was chosen for the Hamaoka Nuclear Power Station because of its superior safety and work efficiency in this work environment.

Hitachi Plant Construction developed a large band saw in 1994. Since then, we have acquired numerous patents for our fireless cutting technology and large band saws, and have accumulated extensive technology and expertise. Furthermore, this equipment itself has features that are not available from other manufacturers.
"One advantage is the ability to accommodate large, unique sizes. Equipment from other manufacturers typically have a cutting capacity of 2m square or less, but our largest large band saw has a cutting capacity of 8m width by 4m height. In other words, even when cutting large equipment, it is possible to fit them in the machine's pocket, so to speak. In addition, the machine can cut horizontally or vertically, the size of the machine can be changed according to the material to be cut and the conditions of the work area, and the machine is extremely lightweight." (Mr. Oohira)
Furthermore, in terms of weight, for example, when cutting a 2m square object, equipment from other manufacturers can weigh 30-40t, whereas Hitachi's large band saw weighs 8.5-4.5t, which is considerably lighter than other manufacturers. This proves to be very effective in terms of on-site maneuverability and installation area selection.

The first stage of decommissioning, from FY2009 to FY2015, began with preparations for dismantling work, including removal of fuel stored in the spent fuel pool and an assessment of the contamination levels. The second stage from 2015 to 2022 saw the start of dismantling of turbines and other equipment around the reactor, as well as the decontamination of the inside of the reactor.

Hitachi Plant Construction began dismantling work in the fall of 2017 and began cutting the turbine and generator in February 2018. The cutting work was performed remotely using a controller to ensure adequate safety while monitoring the cutting status and the surrounding area.

Sophisticated handling achieved that is required to apply the clearance system

The large band saws also demonstrated their ability to meet the challenges unique to the dismantling and decommissioning of nuclear power plants. There is an issue of waste disposal after dismantling. The debris generated during dismantling work can be radioactive to varying degrees. There has been a clearance system established that allows demolition debris to "not be required to be treated as contaminated by radioactive materials" when the government recognizes that the radioactivity concentration is below a certain level (clearance level: 0.01 millisieverts*2 per year) and has no adverse effect on human health. By applying the clearance system, waste from decommissioning can be recycled into useful materials.

In the second stage of decommissioning, work is performed from turbines and other areas around the reactor where radioactivity levels are relatively low. Chubu Electric Power realized that this clearance system could be used for demolition debris such as steel after the turbines and other components had been cut out.

However, the demolition site also presented some difficulties.
"Nuclear reactors and other electricity generating equipment are not originally designed to be demolished. Therefore, dismantling is actually much more difficult than constructing them. In addition, the currently prescribed cutting requirement size for equipment dismantled with complex geometries must be kept to a small size and weight, which has sometimes posed unexpected difficulties!" (Mr. Oohira)

Nevertheless, the advantages of the utilizing the Hitachi large band saws were also useful in terms of storage and management of dismantled products: such as the fact that there is no disposal method that involves melting the material with a liquid and disposing of it, that the cut surface is clean and easy to organize and arrange after dismantling, and that low-speed cutting is possible with little thermal effect on the material.
Chubu Electric Power obtained clearance approval for approximately 7,700 tons of demolition debris for the first half of the second stage in March 2019, underwent a review of safety regulations, and plans to apply for clearance confirmation for another 4,000 tons.

In this dismantling work, there were many interactions with the customer, and while we received a wide variety of inquiries, we also received suggestions from the customer in the course of our discussions, making this a highly interactive worksite experience for both parties.
"When we received inquiries, there were some problems that we could not solve solely on site, but we dealt with them promptly and provided solutions in cooperation with our Construction Engineering Sector. We believe that we were able to deepen our collaboration with our customers by using our on-site knowledge to delve deeper into problems that would otherwise have been difficult to deal with, and by proposing and discussing various solutions. I believe that this has helped to further enhance their trust in our company." (Mr. Oohira)

Interacting with our customer in this manner also led to us accumulating techniques and expertise in dismantling work for nuclear power plant decommissioning.

In the third stage, which will begin in 2023, the reactor body and other reactor areas with higher radioactivity levels will be dismantled. Hitachi Plant Construction, in cooperation with Hitachi-GE Nuclear Energy, intends to make use of the techniques and expertise acquired through the second stage of the project in this third stage as well.

"Based on the knowledge gained through this new initiative, we would like to contribute to the nuclear energy business of the entire Hitachi Group by sharing the technical expertise and knowledge that Hitachi has cultivated over the years. There are also many nuclear power stations in Japan that are scheduled to begin decommissioning in the future. Starting with participation in the third stage of decommissioning at the Hamaoka Nuclear Power Station, we would like to apply our technical expertise to these power plants as well." (Mr. Oohira)

Furthermore, in October 2021, in collaboration with Chubu Electric Power, we developed a new cutting and separating method and separating equipment to reduce the amount of radioactive waste. We will continue to work on the decommissioning of nuclear power plants by methodically accommodating the requests from our customers.
Hitachi Plant Construction is also working with Hitachi-GE Nuclear Energy on operations to restart plants. We are committed to contribute to society by providing the value of safety and security.

*1 See Nuclear Regulation Authority website.
*2 Sourced from materials by the Federation of Electric Power Companies of Japan.
https://www.fepc.or.jp/nuclear/haishisochi/clearance/safety/index.html
Lower than the natural radiation exposure per capita (per year) of 2.1 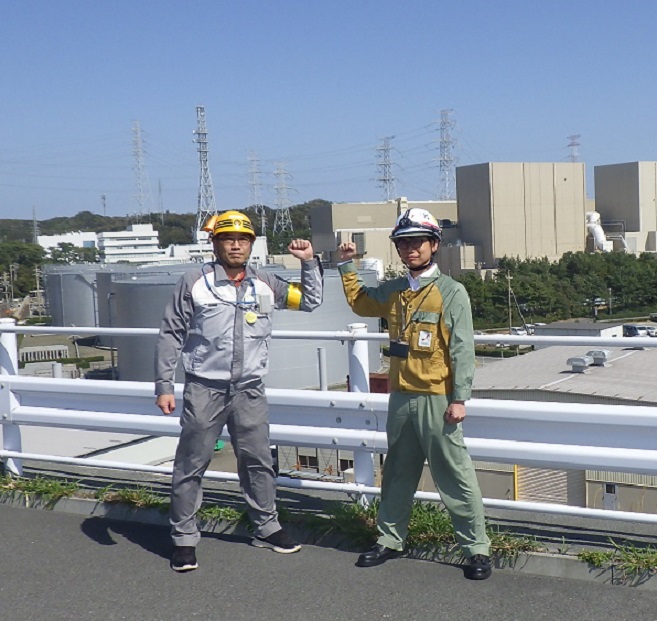