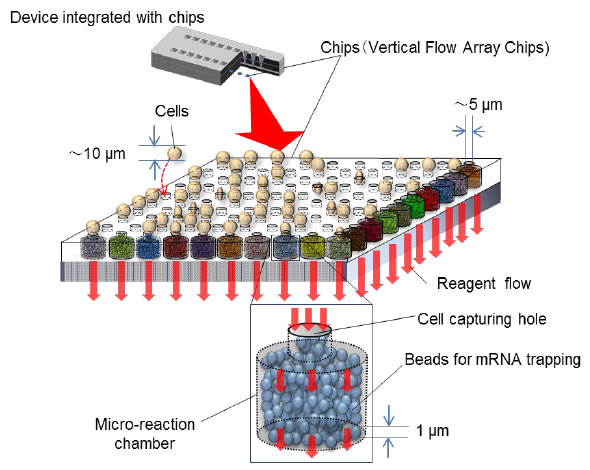 Hitachi, Ltd. announced the development of a compact 1-mm square chip that can efficiently analyze small amounts of various genetic material, specifically mRNA, expressed from DNA with high precision. The chip is able to precisely extract and analyze the various types of mRNA which only exist in minute quantities at any one time - 15 molecules per cell in a maximum sample of 100 cells.

In general, a few hundred to thousands of cell analyses are required to accurately characterize biological tissue. A demonstration experiment confirmed that the genetic material of 2000 cells could be simultaneously analyzed with high precision using a prototype device on which these chips are arranged in parallel. The results indicated that the characteristics of entire tissue, such as cancer, as well as those of individual cells, could be understood at the same time. This result will contribute to accelerating the elucidation of disease mechanisms as well as the development of treatment methods.