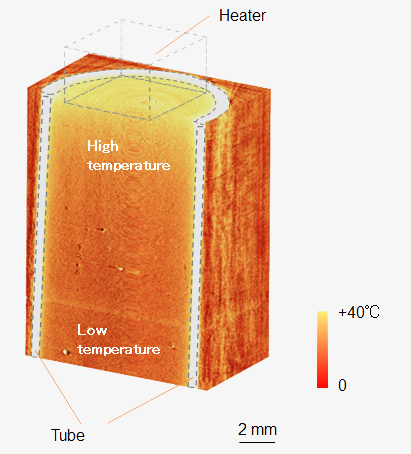 Calorific power of electric power devices and battery goes on increasing by high-density integration and miniaturization, and therefore optimum thermal design is essential to ensure the safety and reliability of devices. Accurate thermal observation inside the devices is required for the optimization of design. However, conventional temperature measurement methods such as infrared thermography can detect only the surface temperature of objects because they use infrared light, and therefore the inside temperature was only estimated by numerical simulation.
X-ray computed tomography (CT), which detects the density of sample as image contrast, is widely used for non-destructive three-dimensional observation inside object in various fields such as medical and industrial applications. Therefore, it is expected that temperature can be detected by slight density changes caused by thermal expansion of sample, and we have been developing a novel X-ray thermography based on the principle since 2016.

In 2017, two-dimensional time-resolved thermal distribution (dynamic thermal flow) of heated water in a cubic cell was successfully observed by utilizing high-sensitive phase-contrast X-ray imaging*2 method using X-ray interferometer developed by Hitachi.*3 In addition, thermal distribution of metallic sample such as aluminum plate was also successfully obtained.*4 To perform three-dimensional thermal observation, we developed a three-dimensional thermal observation system consisting of inner tube with heater, rotational table for inner tube, and outer cubic cell, and added to the phase-contrast X-ray imaging system dedicated in the beamline BL14C of the Photon Factory in KEK. Demonstrative three-dimensional thermal distribution of the water during heating in the inner tube was successfully obtained for the first time in the world.

Hitachi will continue to improve the safety and reliability of electrical devices such as power semiconductor devices and battery by optimization of thermal design and development of advanced thermal control by applying the developed method.

The results were published in the 23th August 2018 issue of Scientific Reports.*5

Electron density of object changes with increasing of temperatures by thermal expansion. However, the changes are very small (<10-5/K), and cannot be detected by using conventional X-ray computed tomography (CT). We applied high-sensitive X-ray interferometry which detects phase-shift caused by sample using X-ray interferometer*6, and made three-dimensional thermal observation possible. The temperature resolution was attained to 2 degree owing to the high sensitivity (<mg/cm3) of the interferometry.

Three-dimensional thermal observation required an apparatus enabling rotation of the sample over 180 degrees in thermal stable condition. We developed a three-dimensional thermal observation system consisting of inner tube with heater, rotational table for inner tube, and outer cubic cell. The outer cell was made from copper and aluminum, and mounted on a huge heat sink to keep the temperature constant. The inner tube was made of polypropylene, and has a small heater to keep the temperature of water in the tube constant. The tube was attached to the rotational table and rotated inside the outer cell to perform CT measurement.

3. Technology for shorten the measurement period

By optimizing the X-ray energy and concentrating the X-ray beam to the sample, the measurement period for three-dimensional observation was shorten to 50 min.

Thermal three-dimensional distribution of water filled in the tube was successfully obtained using the system (Fig. 1). The obtained image shows the temperature in the upper region near the heater is at its highest, decreasing as the distance from the heater increases. In addition, the temperature is almost the same value in the centre and at the edge. The temperature resolution calculated from the standard deviation in a background area is about 2 degrees.

Time-resolved thermal distribution of water during heating was obtained with 1.3 second interval, and the distribution and shape of high-temperature region were coincided with those of calculation. By switching on the heater, the temperature near the heater increased gradually, and a high temperature region expands to the upper area as columnar shape. After reaching the top surface of water, the hot region is spread horizontally (Fig. 3). The highest temperature recorded near the heater was 40 degrees, which coincides with that obtained from conventional infrared thermography. 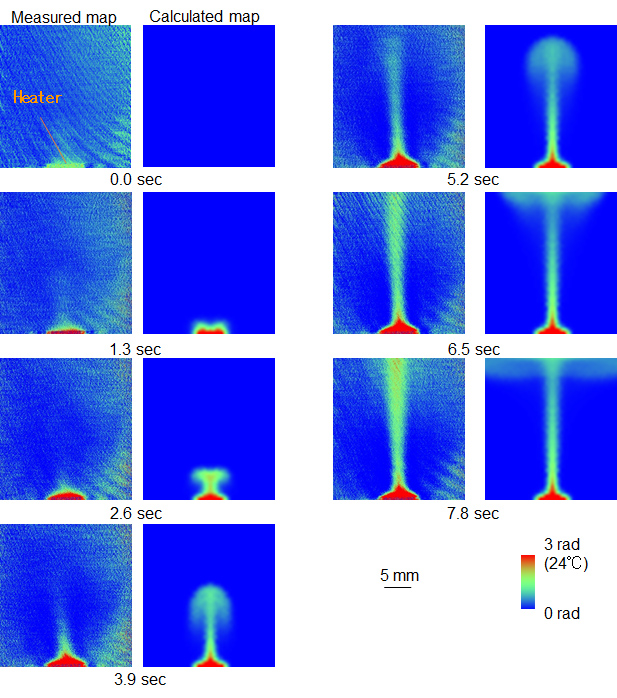 *1
Power device: power semiconductor device used as a switching and converter.
*2
Phase-contrast X-ray imaging: High-sensitive imaging method using X-ray phase-shift caused by passing the sample as image contrast. The sensitivity is about 1000 times higher than that of conventional CT for light elements in hard X-ray energy region, and it enables to perform detailed observation of biomedical and organic material mainly composed light elements.
*3
Yoneyama, A. and Hyodo, K., Feasibility study of X-ray thermography using phase-contrast X-ray imaging in International Conference on X-ray Optics and Applications 2017 (XOPT2017) p8-21 (2017)
*4
Yoneyama, A. and Hyodo, K. Feasibility study of X-ray thermography using X-ray interferometricimaging in The 13th International Conference on Synchrotron Radiation Instrumentation (SRI 2018) PC1-05 (2018)
*5
www.nature.com/articles/s41598-018-30443-4
*6
X-ray interferometer: An interferometer made of perfect silicon and has three-wafer function as optical device for dividing, reflecting, and recombining the incident X-ray to generate interference X-ray. X-ray interferometry using the interferometer for detection of phase-shift is a kind of phase-contrast X-ray imaging, and has the highest sensitivity among other phase-sensitive method.