Hitachi, Ltd., through co-creation with Obayashi Corporation (“Obayashi”), has demonstrated that a solution combining office space design and IoT can change the mindset of working individuals and thereby bring about workstyle reform. This initiative utilized IoT technologies, taking an office utilization support application (“app”) prototyped by Hitachi using Lumada. The app was equipped with a recommendations table, that proposed new ways of working in the new office building designed by Obayashi, in order for employees working at Kyōsō-no-Mori*1 to put new workstyles for value creation into practice. As a result of the PoC (Proof of Concept), employees were found to have made changes in their mindset in selecting office areas in line with operations, and also changes in behavior, such as engaging in greater communication with more people. Hitachi will increase the versatility of the app’s system architecture to develop solutions for customers working to realize workstyles that represent their organizational vision through office space design .

Approach taken to resolving the issues

(1)
Workstyle mindset change: Verified that 67% adopted the habit of thinking about which office workspaces to use before starting work
(2)
Behavioral change: Observed a 30% increase in the number of people with whom a person engaged in communication, and an 86% increase in the number of areas occupied. The workstyle changed to one where information was shared with a wider range of people while using the different office spaces according to the work being performed

Details of the approaches to resolving issues

1. Quantitative measurement of communication and concentration rate in office spaces

Using “Human Big Data / Cloud Services” that includes ID card-type sensors, a survey was conducted on behavior and mindset with accelerometers to detect employees’ physical movement, infrared transmission to detect face-to-face communication, and office space occupied. Based on previous research on physical movements and rhythms, whether communication was active and interactive, and whether one was in a state of concentration, etc. were determined. A quantitative assessment on the state of use, quality of communication and desk work in each area of the office was made based on these measurements.

The results of the survey on behavior and mindset by area showed that, only a specific area near one’s seat was being used even after the office relocation. We assumed that a gap existed between the conventional thinking that “work is to be done at one’s seat” and the expected new workstyle in Kyōsō-tō to utilize various areas flexibly in line with operations. In order to resolve this gap, we prototyped a Lumada-based app that would support greater and more flexible utilization of the office, encourage employees to positively draw out the potential of Kyōsō-tō and put new ways of working into practice. The app proposed “recommended actions” in each area of the office. Users earned higher points when they acted on the recommendations from the app and visited various areas in the office and communicated with different people. Employees can thus enjoy trying new ways of working through this gamified app, with feedback to recommendations based on measured sensor data. The “recommended actions” were prepared in a set form, based on the measured results of the post-relocation survey, with Obayashi members who designed Kyōsō-to. These were incorporated into the app as a recommendations table. The app was developed with Hitachi’s existing technologies, incorporating the recommendations table developed through co-creation with Obayashi. 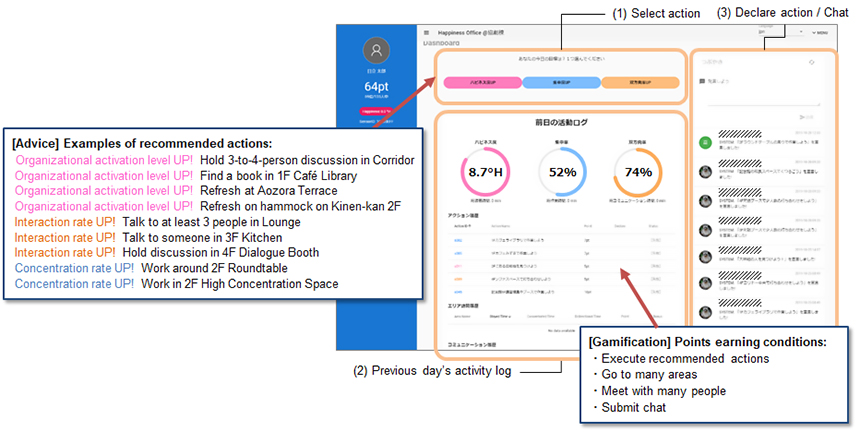 3. Flow of operation at Kyōsō-no-Mori, and system architecture of the app in PoC

Working together since the decision was made to construct the new building, Hitachi and Obayashi conducted a series of discussions and surveys on how to change the employee mindset and behavior in terms of ways of working to realize the vision of Kyōsō-no-Mori, as illustrated in “Flow of operation” on the right side of Figure 3. “Human Big Data / Cloud Services” sensor measurements and questionnaires were conducted in the pre- and post-relocation behavior and mindset surveys, followed by implementation of an intervention experiment for changing behavior and mindset using the Kyōsō-no-Mori utilization recommendations app, prototyped by Hitachi based on Lumada. The system architecture of the prototyped app is as illustrated on the left side of Figure 3, with a recommendations table (recommended actions) for Kyōsō-tō. 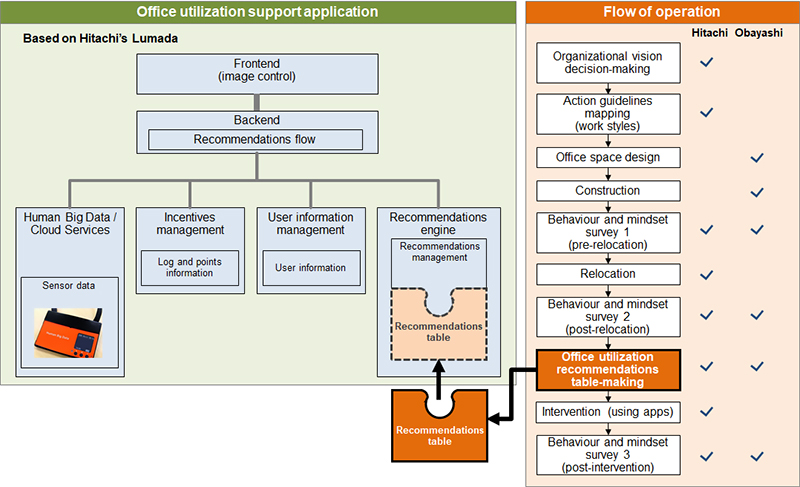 4. Video introduction of this initiative

The changes in employee’s behavior, before and after use of the intervention app, are introduced with the measured sensor data, in this video. 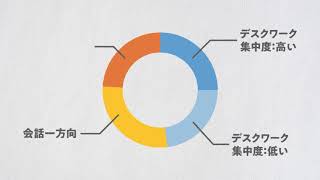