Hitachi has developed a 1.1-m-diameter magnesium diboride (MgB2) superconducting magnet that can rapidly generate a magnetic field space as required for magnetic resonance imaging (MRI) examinations and has verified that MR imaging of the head region can begin within 10 minutes from a zero-field state compared with 1 to 2 hours using conventional equipment. An MgB2 superconducting magnet can be cooled simply by applying power to a refrigerator without the use of liquid helium, a scarce resource, and equipping MRI with this magnet provides a new method of operation in which a magnetic field is generated only for imaging and turned off at all other times. Conventional magnets generally do not turn off the magnetic field other than for equipment maintenance and therefore require strict magnetic-field risk management at all times. The developed magnet, in contrast, does not require such risk management except during imaging. Additionally, since it can generate the required magnetic field within 10 minutes, it can be applied to “intraoperative MRI” in which MRI is performed several times during surgery. In the above ways, the MgB2 superconducting magnet is expected to support doctors in their work and to contribute to enhanced medical services for patients. Going forward, Hitachi aims to use this magnet to improve the usability of existing MRI systems and other types of equipment applying superconductivity and reduce the consumption of liquid helium and power. Hitachi seeks to reduce environmental load by promoting the application of this magnet to other fields including environmental technology, transportation, and industry. 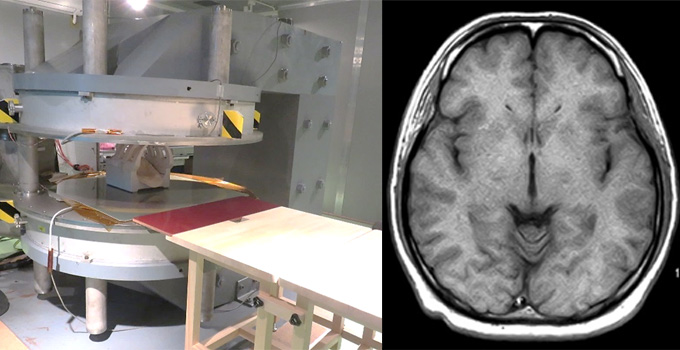 Fig. 1 External view of MgB2 superconducting magnet and a cross-sectional image of a head

Hitachi presented a portion of this technology at The 33rd International Symposium on Superconductivity held at the National Institute of Advanced Industrial Science and Technology (AIST), December 1 - 3, 2020.

A superconductor generates no heat since electrical resistance is zero for a fixed current, but for a fluctuating current, it does generate heat for factors other than electrical resistance and generates more heat with more fluctuation. In other words, coil temperature rises as current rapidly increases and decreases preventing the superconducting state from being maintained. This is the reason why it takes time to generate a magnetic field in conventional MRI magnets. Compared with niobium titanium (NbTi) used in conventional MRI, MgB2 can be used at high temperatures. This makes liquid helium unnecessary and enables a design with a large difference between operating temperature and critical temperature (the limiting temperature at which the superconducting state can be maintained). An MgB2 magnet can generate a magnetic field rapidly by taking advantage of this feature.

An MRI magnet must be able to continuously generate a stable magnetic field space that is sufficiently large for imaging of the human body. This, in turn, requires a large superconducting coil with a diameter of 1 m or greater. Additionally, if the diameter of a superconductor that includes superconducting wire is large, the magnetic field will fluctuate due to the effects of internal, locally generated circulating currents making MR imaging difficult. It is therefore necessary to make the wire as thin as possible.

While MgB2 can be obtained by heating a mixture of magnesium and boron powders, it is a ceramic having hard and brittle properties. Using MgB2 as a wire therefore requires that it be protected by covering it with an appropriate metal, but understanding the amount of thermal deformation of MgB2 wire—a compound material—is difficult. Thermal deformation in the case of a large-diameter coil occurs in units of mm, and the superconductor within the wire is thin, so there is an even greater risk of degraded wire performance.

It was verified that this technology enables current to flow without degradation in wire performance in a 1.1-m-diameter MgB2 coil that had experienced thermal deformation. This coil uses MgB2 wire having 10 thin superconductors. It was also verified that the MgB2 magnet could be maintained sufficiently below the critical temperature despite generating a magnetic field faster than conventional equipment and that a stable magnetic field for MR imaging could be generated within 10 minutes in an imaging space with a diameter of 200 mm sufficient for body imaging.

Fig. 3 Side cross section of MgB2 magnet and test results when rapidly generating a magnetic field

These effects can be used to enable new ways of using MRI. It could be applied, for example, to “intraoperative MRI” that performs MR imaging several times during surgery, a practice that has recently been adopted for brain tumor surgery. Conventional MRI is constantly generating a magnetic field, and a magnetic field in a range exceeding 5 Gauss (0.5 mT) corresponds to a controlled area in which standard surgical equipment and instruments cannot be brought in. Doing so raises the possibility that such equipment or instruments will be pulled in by the magnetic field resulting in a major accident, a situation that would require strict risk management even during surgery. With the developed magnet, a magnetic field need be generated only during imaging, which means no controlled area during surgery thereby easing the burden on doctors and nurses. In addition, since the magnetic field may be turned off other than during imaging, an operating room installing MRI equipment may be used as an ordinary operating room and no magnetic-field risk management would be necessary such as during cleaning or other maintenance work. Mobile MRI can also be considered as a new way of using MRI since the developed magnet is easy to transport in a state with no magnetic field and enables a magnetic field to be generated quickly on-site.