Hitachi has opened a demonstration site for a stand-alone nanogrid*1 (Fig.1) at the Kitamura-akagawa mining facility in partnership with Iwamizawa City, Hokkaido as a local stand-alone energy system enabling local production and consumption in Iwamizawa City to both low-carbon local industry and strengthen disaster prevention functions. Hitachi started proof-of-concept testing at this demonstration site on November 9, 2021 in cooperation with local companies and farmers. In addition to solar power generation, this nanogrid energy system will generate power through a multi-fuel engine*2 using the methane gas produced by natural hot springs as well as crop residue thrown out by farmers and other cheap unused resources to run electric farming machinery and recharge crop spraying drones. These innovations will contribute to low-carbon agriculture. The stand-alone nanogrid can supply emergency power to evacuation shelters, even in large-scale blackouts caused by disasters or other calamities. Hitachi Hokudai Lab takes advantage of the mathematical optimization technologies developed thus far in cooperation with Hokkaido University in the operation of this energy system. In the future, Hitachi will contribute to decarbonization and the realization of a Green Society through cooperative partnerships using the Hitachi Hokudai Lab and other industry-academic-government sites as collaboration bases.
Hitachi held an opening ceremony for the demonstration site jointly with Hokkaido University and Iwamizawa City on November 9, 2021.

Stand-alone energy systems enabling local production and consumption are more important than ever since Japan committed to carbon neutrality by 2050 last year. Each region can effectively use the energy produced locally, even in disasters, while these local energy systems can expand the use of renewable energy. In particular, small-scale stand-alone nanogrids are expected to be adopted more than traditional microgrids*3 in Hokkaido due to a further decline in population and the dispersion between areas with power demand and areas suitable for renewable energy power generation. However, solar and wind power face obstacles due to factors such as large fluctuations in the power supply, the need for a certain size of grid to provide a stable supply of electricity, and high implementation costs. Therefore, Hitachi has configured an energy system that is able to operate independently from the electricity grid as a small-scale nanogrid. Furthermore, taking full advantage of the mathematical optimization technologies developed jointly by the Hitachi Hokudai Lab and Hokkaido University, a power operation model has been developed that can provide power earnings forecasts according to power fluctuations as well as a guide on the implementation of optimal energy systems suitable for actual local needs.
The stand-alone regional energy system enabling local production and consumption developed for this demonstration site consists of the technologies below.

The power sources for the stand-alone nanogrid developed for this site consists of not only solar panels but also a multi-fuel engine for highly efficient power generation via AI-controlled combustion using low-concentration ethanol, which can be manufactured from food and crop residue, and other inexpensive unused resources as well as methane gas produced by natural hot springs (Fig.2). By using the power generated by this energy system to recharge the batteries of electric farming machinery and crop spraying drones, the nanogrid helps use local unused resources and accelerates the adoption of renewable energy. This system also achieves stand-alone operation which does not rely on the existing electricity grid by optimizing the control of power generated by the multi-fuel energy in real time according to fluctuations in the power generated by solar panels due to weather and other such conditions. The nanogrid also contributes to stronger disaster prevention functions from supporting daily agricultural low-carbon to supplying emergency power to evacuation shelters from an energy system independent of the electricity grid during disasters and other calamities.

We will construct a multi-nanogrid network in the future to configure an energy system that accommodates the power generated from several facilities using electric vehicles (EVs) and other such means of transport. This use of multiple nanogrids is expected to improve power earnings and provide stable power management equivalent to that of large-scale grids. To achieve this type of system, we must optimize the control of power for the entire system by taking into account factors such as variations in the power generated by the solar panels caused by changes in weather and other conditions as well as fluctuations in the power demand on each farm. Therefore, we developed simulation technology for interconnected nanogrids to forecast power earnings when configuring this energy system (Fig.3). This technology creates a model of an energy system where multiple nanogrids are linked with each other so that each nanogrid works in tandem with one another to generate power according to weather changes, demand fluctuations, and other varying circumstances. This enables the forecasting of short- to long-term power earnings by calculating a practical plan for EVs to charge and discharge power.
The simulation technology modeled weather conditions for Iwamizawa City using data about sunny days over the last ten years and used daily job reports of the farms to configure a power demand model of 15 farms (150 ha of farmland) when transitioning to electric farming machinery. As a result of forecasting the daily power earnings realized by building three nanogrids in the city at the same scale as the current demonstration site and creating a model to accommodate the surplus power between each nanogrid using three EVs, we have confirmed that the energy system would reduce the dependency on the existing electricity grid to no more than 10% of the power consumption on 15 farms. This simulation technology will make it possible to evaluate the short- to long-term impact of setting up municipal energy systems enabling local production and consumption and contribute to the decarbonization of the local region. 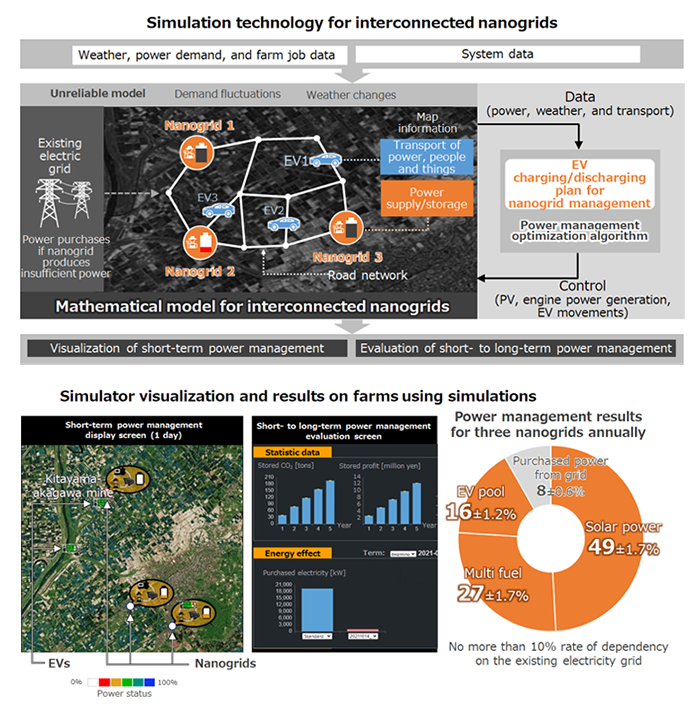 Some of these results include the results obtained from the F/S survey conducted by the Challenge Field Hokkaido as a NEXt University-Society Open Innovation Initiative of the Ministry of Economy, Trade and Industry.

*1
A stand-alone nanogrid is an energy system that is smaller than a microgrid. A nanogrid can manage power at a regional level.
*2
Development of AI Technology for Power Generation Engines Using Self Learning to Adapt Combustion Control Methods According to the Type and Mix of Fuel (May 10, 2018 News Release) (Japanese Only)
*3
A microgrid is a power system that supplies power loads from distributed power sources.