The increase of labor costs due to the expansion of the e-commerce market is a serious problem in logistics warehouses. In these warehouses, order picking accounts for about 55% of the labor costs. To reduce the order picking cost, automated guided vehicle (AGV) picking systems have been developed (Fig. 1) [1]. AGVs transport the entire shelves including the required items (inventory shelves) or shipping boxes (sorting shelves) to a picking station (PS) at which a picker works. The picker picks the ordered items from the inventory shelves and sorts them into the shipping boxes in the sorting shelves without walking around the warehouse, which improves the productivity of his picking activity. The AGV picking systems scale the throughput easily by changing the number of AGVs, shelves, and PSs. In conventional systems, the sorting shelves are fixed or are transported only after the completion of the sorting work of the shelves. These systems lack shelf-transport task scheduling flexibility. 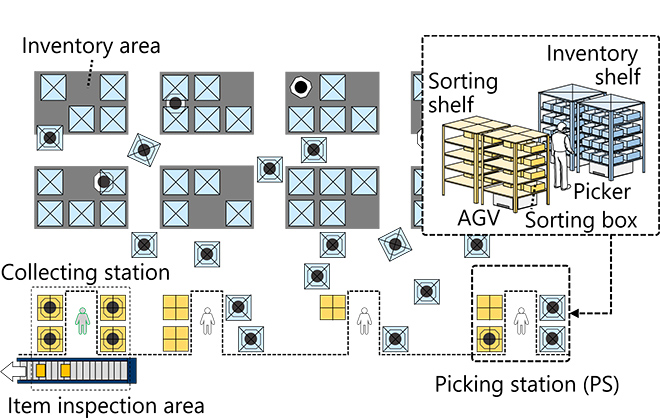 Figure 1. Schematic view of AGV picking system. A panel enclosed in a dashed line represents configurations of PSs in the system.

We proposed a new AGV picking system, "ShelfMigrant system" (Fig. 2). The ShelfMigrant system can reduce transportation time by transporting both the inventory shelf and sorting shelf (PS2 in Fig. 2) when there is distance between those shelves (PS1 in Fig. 2), for example. Thus, the tasks may become flexible but complex because the system needs to consider the states of shelves, AGVs and picker’s waiting time. Therefore, the ShelfMigrant system requires an intelligent real-time scheduling method to handle complex transport tasks and decide which inventory shelf and sorting shelf are to be transported, to which PS, by which AGVs, and at which time. 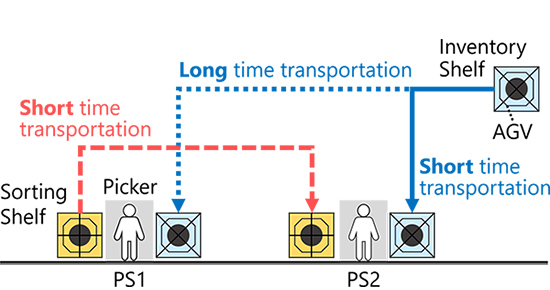 In a recent study, we applied a real-time holonic scheduling method [2] to select the best combination of them. Holonic scheduling is a scheduling method for holonic systems. The holonic system, which was originally developed for flexible manufacturing systems, has been used in a wide range of domains. A holon, which is a combination of "holos (whole)" and "-on (particle or part)" in Greek, is defined as an autonomous and cooperative module of a system. A holon consists of an information processing part and often a physical processing part. The information processing part includes the holon's own information, a calculation unit to evaluate holons and often make decisions cooperatively among holons, and a communication unit to exchange information with other holons. In holonic scheduling, a coordination holon (a computing unit that achieves coordination among holons) selects a combination of task holons (orders containing information about the production and transportation) and resource holons (production and material handling resources) based on the effectiveness values of the combinations. The effectiveness value is an indicator of the state of a holon. Each holon sends its effectiveness value to the coordination holon. The coordination holon selects the best combination of task holons and resource holons based on the effectiveness values of the combinations. In our proposed system, pickers, PSs, AGVs, and shelves are resource holons, transportation tasks that include several picking orders are task holons, and a control unit is a coordination holon. The real-time holonic scheduling can select the combination of the inventory shelf, sorting shelf, and AGVs that is expected to minimize transportation time and reduce the waiting time of the picker at a PS. 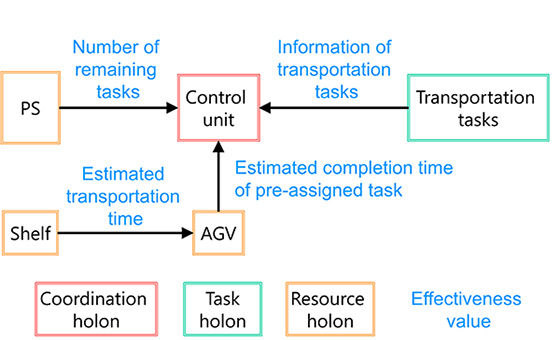 Figure 3. Holonic building blocks and their relations in proposed system. Each building block represents a holon, and annotations of arrows represent effectiveness values that holons at arrow's tail send to holons at its head.

We used an AGV picking system simulator to evaluate the productivity of the proposed system and that of the conventional method that transports sorting shelves only after finishing the sorting work. The results show that the larger the working area and the higher mixed and lower-volume the picking orders are, the more efficiently the proposed method solves scheduling problems. 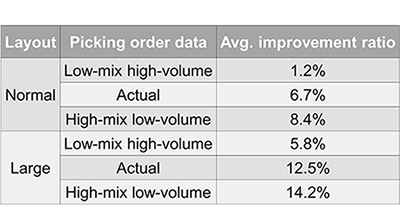