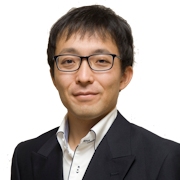 One of methods to protect an object from friction, heat or electric current is "film fabrication," which coats its surface with other materials.

Typical methods to fabricate ceramic films require substrates and ceramic raw materials to be heated. In contrast, the aerosol deposition method (ADM) can form films without such heating, as it impacts ceramic particles on the substrate under room temperature.

In order to apply this method to actual products, Hitachi has been engaged in the research of technologies to reduce its cost.

Applying the new technology to products

In what areas are ceramic films used?

NAOEAn example is a cutting tool. A ceramic film is generally used for protecting a substrate that is subject to friction. It is also applied to products used in a high-temperature environment, such as gas turbines. By employing materials that do not conduct heat easily, the ceramic film can prevent the heat of gas combustion from damaging turbines. Other than such uses, and for much smaller things, it is used for insulation of electronic devices.

How are the films fabricated? 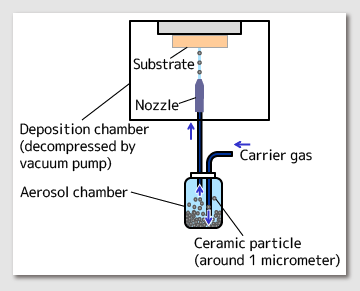 Does the different mechanism of this method have any advantages?

NAOECompared with conventional methods to fabricate ceramic films, ADM has the advantage that films can be formed at room temperature. As mentioned earlier, conventional methods require substrate and ceramic raw materials to be heated. The heat can damage the substrate and makes it difficult to use their original properties. In contrast, ADM can fabricate films on the substrate without causing any damage by heat, as it just impacts the ceramic powders, the raw materials of the film, onto the substrates at room temperature.

ADM is a relatively new method for film fabrication, as its development made progress in the 2000s. Although applications and characteristics had been studied eagerly by other researchers, a "technology for reducing costs", which was really needed to apply the method to actual products, had not been developed. That was why we decided to work on research for the technology to reduce cost of ADM.

When talking about reducing cost, it suggests eliminating waste, doesn't it?

NAOEIn ADM, some particles impacted onto the substrates become films. However, others are scattered around and wasted. The more easily the particles become films, the lower costs can be realized by reducing the waste.

Crushing particles to select the materials

What do you mean when you say that particles that are "crushed easily" are prone to become films? 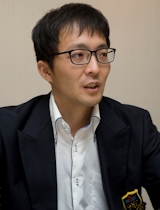 If you magnify and observe the films fabricated by ADM, you can see that particles have been deformed. The particles were "crushed" when they were impacted onto the substrates. This gave us an idea that being "crushed easily" may be correlated with film fabrication. Thus, we decided to compress particles produced in different ways and measure how easily they were crushed.

At that time, a researcher who was involved in a different research subject in the same department was to conduct tests to compress particles. She kindly invited me to join the tests, so I asked her to compress my particles as well.

What were the results you obtained from crushing the particles? 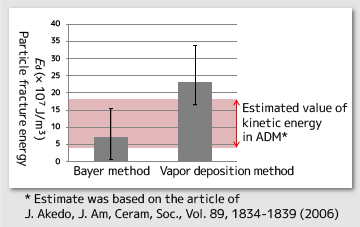 The graph shows the fracture energy of particles produced by respective methods. It is easier to understand if you not only compare the Bayer method and the vapor deposition method but also check the estimated values of kinetic energy in ADM, which represent the power applied to the particles when they are impacted onto the substrates. The fracture energy of the particles produced by the Bayer method lies in the red band zone, which shows the scope of the kinetic energy in ADM. This means that, as the particles are easily crushed, they are crushed properly by the force applied when they are impacted onto the substrates and then become films.

On the other hand, you see that the fracture energy of particles produced by the vapor deposition method is higher than the kinetic energy in ADM. This means that particles produced by the vapor deposition method are hardly crushed and the force applied when they are impacted onto the substrates is not strong enough for them to be crushed. These results clearly told us that, in order to form films efficiently, we had better select "easily crushed" particles that require smaller amounts of fracture energy.

Can you tell us about the research on the other subject of your findings? 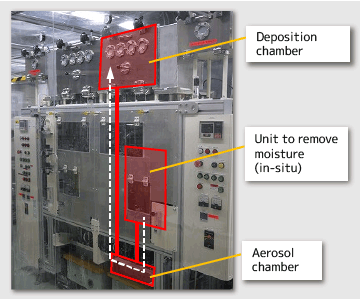 Thus, the pre-treatment and management of particles are important in ADM.
If you use ceramic particles without any treatment, they sometimes become films and sometimes don't. So we had conducted the pre-treatment to remove the moisture of the particles. However, even though moisture is fully removed in advance, the particles will again contain moisture if they are exposed to the air to be set into the equipment.
In developing the new equipment, we focused on the process for removing moisture of the particles and directly forming films without exposing them to the air. The developed equipment can enhance the film properties and the efficiency of forming films.

What did you find difficult in this research?

NAOEIt is difficult to develop ceramic films that meet all requirements of a practical application. For example, how strong they are? How do they break when repeatedly heating and cooling them? How much do they conduct heat? Of course, cost is one of the points to be checked. Even though a film shows a excellent property, it can't be applied when other properties are inferior.

What you do for a certain purpose may turn out to be useful and productive for other purposes as well. I really realized that negative data could contribute to progress of research by thinking the cause positively. This is the delight and fun of research.

Looking for the process that takes advantage of the materials' characteristics

Is it true that you have made other elaborations with the developed equipment?

NAOEYou are right. As I mentioned earlier, in ADM, the impacted particles are scattered around unless they are attached to the substrates. As a matter of fact, this equipment has a mechanism in which the scattered particles are impacted again. The mechanism has further enhanced the efficiency of film fabrication by using particles repeatedly. Other than this, we paid attention to the shapes and numbers, and intervals of nozzles. We also conducted cost analyses considering the technology is applied to actual products. Therefore, I believe the specifications satisfy practical use.

What do you think are issues that remain to be tackled with regard to ADM?

NAOELooking ahead, developing materials themselves will become an important issue. In the latest development, we found a way to select particles that are prone to become films. However, I feel that we may be able to produce particles that are more suitable to ADM on our own. For example, we may produce particles with a certain size alone, or we may composite particles composed of several materials. If we master the development of the materials, we should be able to achieve higher quality and lower costs.

Finally, can you tell us about your attitude and devotion to research? 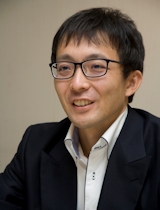 NAOELet me reflect back a bit. When I was a student, I studied fundamental characteristics of materials such as metal and ceramic. I began to study ADM only after I joined Hitachi. More recently, while I continue research on ADM, I am mainly engaged in research of the production processes of lithium ion batteries. At school, materials themselves were the subject of my research. After I started working at this company, I have been studying processes of how products should be manufactured using the materials.

Through the research of ADM, I strongly felt that, no matter how good materials were, processes handling them were important to make the most of the materials. I want to continue to research such processes.