Hitachi started its research of vehicle measurement, prompted by the surfacing idea of manufacturing railway vehicles at a local plant outside Japan—producing components in Japan and sending them to the overseas plant for assembly. The railway car body measurement technology, developed over three years by researchers placing top priority on "how it can be readily used at the front lines of manufacturing," will greatly change the production scenes of railway vehicles inside and outside Japan.

What initially triggered this research on technology to measure railway vehicles?

TSUTSUMIThe size of the entire railway market is said to be approximately 200 billion U.S. dollars per year, as railway infrastructures are being replaced in advanced countries and new infrastructures are being developed in emerging countries. Given such a large market, Hitachi has proactively conducted overseas expansion of its railway vehicle business, and an idea of trains for the U.K. market in the company's local plant surfaced a little before we started this research.

Up to that time, the company produced railway vehicles at its Kasado Works in Kudamatsu City, Yamaguchi Prefecture. The new plan was for a shift to a global production system. The company would manufacture what are called "body structures," or empty, box-shaped bodies of vehicles, at the Kasado Works, and ship them to local plants outside Japan, where the body structures are assembled with other components to become completed vehicles. As far as the vehicles are fully manufactured at the Kasado Works, some changes in the shape of the body structures can be addressed, because skilled engineers can make adjustments to manufacture components. However, if the vehicles are assembled at an overseas plant, we must eliminate such adjustment operations. In other words, we have to create body structures that require no adjustment. This was the challenge that triggered the start of the research for vehicle measurement. 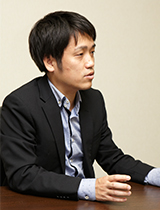 KASAIConventionally, when manufacturing railway cars, we measured the dimensions by using tape measures and rulers, and recorded the results on paper. This method was believed to suffice at the manufacturing site, as the vehicles were actually produced that way. At the same time, there were opinions seeking better ways to manufacture the products. Nowadays, with the advancement in the digitization of information, we can make products by linking a variety of data with each other. So we decided to change the method to measure the dimensions, from an "analog" method using tape measures and rulers to a method using digital measurement instruments.

Was it a major change to switch from analog to digital, or from two dimensions to three dimensions?

TSUTSUMIThat's right, it was. In the past, whenever we ran into trouble, we took out huge paper volumes of filed materials and checked the contents. But it took a day or two just to find the relevant materials from among the files, entering the recorded data onto the spreadsheet software and making graphs. Now, we accumulate data in digital format so that we can refer it at any time and utilize it as much as possible. This is what is aimed at with the railway car body measurement technology that we have developed. So we not only produced innovation in the measurement method but also conducted research and development of electronic systems for inspection sheets and the schemes for utilizing accumulated data. 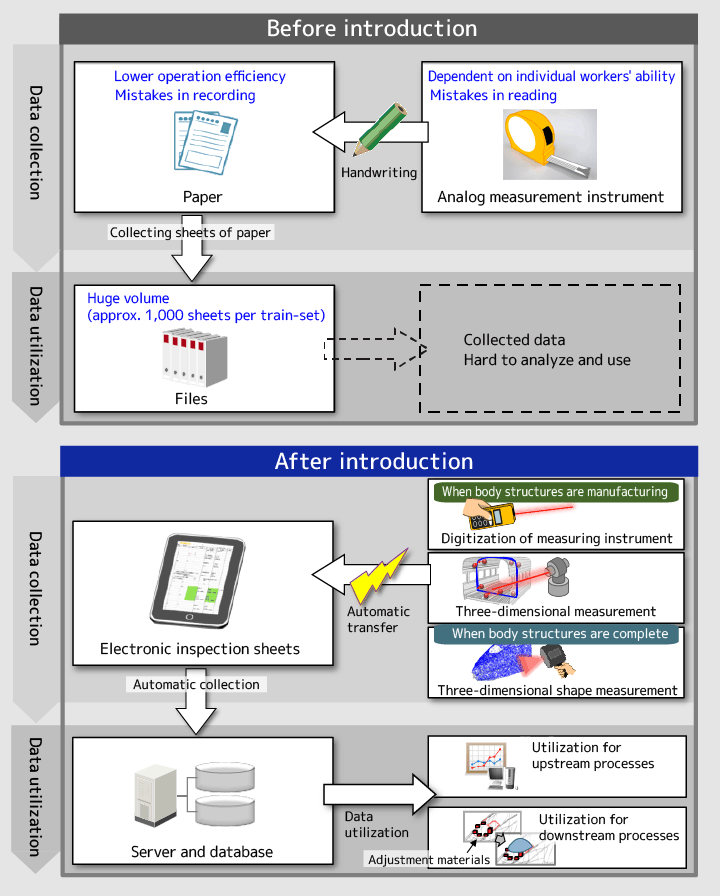 How are railway vehicles manufactured?

TSUTSUMILet me explain it briefly. The first process is "manufacturing of components" in which components are produced or procured. Next is the "welding" process, where the components are welded to create six blocks called the "end panels" in the front and rear, "side panels" on the right and left, the "roof" and "underframe." These blocks are welded together to form a hexahedral body structure. In the "assembly" process that follows, interior fittings like window glass and seats are assembled, electronic devices and other equipment are installed under the floor, and painting is conducted. Through these processes, the vehicles are completed and transferred on to the "inspection and shipping" process.

KASAIOf these processes, the three-dimensional measurement is conducted during the welding process, where deformation is apt to occur to the products' shape due to the heat from welding. For blocks that only comprise planes, you can make inspections after welding by using rulers, etc. However, for the blocks comprised of curved lines and curved surfaces, or uniquely shaped matters such as the lead vehicle of the Shinkansen bullet train, it is very difficult to measure to confirm if they are ideally shaped. That's why we introduced three-dimensional measurement using laser trackers.

What were the areas of elaboration in introducing three-dimensional measurement?

KASAIIn essence, three-dimensional measurement instruments such as laser trackers have complicated mechanism, and their operation is no simple task. Thus, dedicated operators are needed for measurement. On the actual manufacturing sites, however, workers engaged in welding or those who do not usually operate computers may have to make measurements. Due to this, we endeavored to make sure that anybody could operate the new measurement system easily and without making mistakes while they are engaged in their ordinary operations.

With the newly developed system, those who make measurements operate it in accordance with the voiced guidance that the system provides. The computer screen indicates whether measurement is performed properly using figures and colors as well as sound. Thus, they can perform measurements even without looking at the computer screen.

TSUTSUMIThree-dimensional measurement instrument can measure coordinate data, but the on-site workers require the actual dimensions. The new system has a function to automatically calculate the dimensions from the measured coordinate data, so that the figures can be immediately checked on-site.

What changes are evident in operations when the workers grasp accurate dimensions?

KASAIIn the case of the Shinkansen bullet train, for example, the glass facing the driver's seat has a curved surface, and the round areas in front, called "round end panels," are deformed as there are many welded parts. Conventionally, glass was mounted on the window frame of the round end panels and somehow fitted in through repeated adjustments. However, once you have the accurate dimensions, you no longer need to mount the glass and make adjustments because you know how much the window frame has been deformed through welding and where and how many millimeters adjustments to the frames are needed to fit the glass.

Is it correct that if adjustments become simpler, production efficiency is increased? 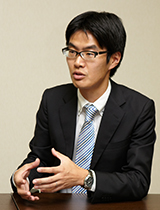 TSUTSUMIExactly. One of the operations where efficiency is improved is the work to place the floor boards in the Shinkansen bullet trains.

Under the floor of the Shinkansen bullet train, you see some pillars that make space for setting cables and pipes. On these pillars, some 20 floor boards are placed over a span of 25 meters. We have to place the floor boards that are exactly the same level as adjoining floor boards, but the height of the pillars are not even because of the welding. Then, we use several thin, sheet-shaped "adjustment materials" to adjust the height.

Earlier, we often had to repeatedly prepare the adjustment materials, and cut them to a necessary length and then place them. Since the boards are large, this was tough work.
Furthermore, when you look at a train car from the side, you notice that it is arch-shaped with the center rising. If you only need to place the floors straight, it would be easy to make adjustments. However, to make a beautiful arch-shaped curve requires extremely high skills and techniques.

By introducing a three-dimensional measurement system, the dispersion in the height of the pillars can be seen using the three-dimensional coordinate data measured in advance. In addition, by calculating the floor height based on the ceiling arch, the system can automatically calculate the adjustment volume required for making beautiful arch-shaped floors. This indicates the number and thickness of the plates of adjustment materials that are needed. Moreover, the system automatically prepares "assembly instructions" that show which adjustment materials must be installed where. This reduces the time required for adjustments.

KASAIMaking adjustments by matching actual objects is called "gauging" in the sense that the actual objects are gauged to proper dimensions or criteria. For that matter, we refer to the newly developed technology as "virtual gauging" because the system assembles products virtually using data measured in three dimensions.

TSUTSUMIOn-site people use the word "adjustment-free" for easier understanding of the technology, such as "adjustment-free assembly." They also call it "one-shot installation."

What was the most emphasized aspect in researching vehicle measurement and developing the system?

KASAII strongly emphasized the idea of "a system that can be used on-site in ordinary operations." Researchers think of some methods or ways to achieve certain tasks or functions, and often verify them at laboratories. However, I emphasize the idea that the system we have designed should be actually used at the front line of manufacturing to manufacture the railway vehicles. This is also what I work hard on to achieve.

TSUTSUMIWe belong to the Center for Technology Innovation - Production Engineering, and the Center is characterized by the fact that the researchers work all the way through to final applications at the manufacturing site. Sometimes we meet opposition from the on-site people. However, we try not to persuade them, but let them fully understand and willingly accept our offerings. To do so, we must have a deep knowledge of the manufacturing sites. So we were stationed at the Kasado Works for about three years.

Connecting design people and on-site people, and bridging Japan and the world

What is the feedback since the system has actually been used on-site?

TSUTSUMIInternally, we were honored by the company with the encouragement award called the Monozukuri Technology Award. What's more, it is the most pleasing to see the system actually in operation at the manufacturing sites.

What are your perspectives on the three-dimensional measurement technology?

KASAIAs I am currently working to change the scheme of creating products on the manufacturing site, I believe that the three-dimensional measurement data can be utilized for designing, and the way of manufacturing may be changed from the designing stage.

TSUTSUMIWhen the three-dimensional measurement data is accumulated, we can understand what distortions have occurred due to welding, and the degree to which there is dispersion in the dimensions. If we can reflect the distortions and dispersion in the designing stage, instructions from the design people on how to manufacture the products should become more appropriate. I want to be in a position to serve as a bridge between the on-site and design people.

In addition, I hope to support manufacturing at our overseas plants. I believe that, by using the three-dimensional measurement system that anyone can easily conduct operations without making mistakes, and high-quality vehicles can be produced efficiently at overseas plants.

KASAIIn conducting the research of the three-dimensional measuring system, we focused on "how we should proceed" under a strategy elaborated on by the topside people. That is of course rewarding. In the future, however, I hope to first work on creating a strategy for changing things to certain ways. I want to be a person who can elaborate on the strategy and propose ideas for doing something by getting others involved.

TSUTSUMIIn conducting research, it is often the case that we work on a certain theme by digging in to it deeply. But I have experienced a variety of themes such as designing, manufacturing and inspecting for businesses other than railways, and now think that we should "look over the entire processes." Taking advantage of the experience of getting in touch with multiple subjects, I want to be a researcher that can objectively oversee the whole picture, and hope to create themes that require such a perspective.