Discerning the "Chemistry" of Metals to Develop a Thermoelectric Conversion Module

Thermoelectric conversion, which generates electricity from heat, is receiving increasing attention as eco-friendly technology that makes use of waste heat. Hitachi, Ltd. has developed a thermoelectric conversion module that can function in the high temperature zone (300 to 600 degrees Celsius), which had earlier been difficult to create for general applications. The Company has achieved higher reliability and power generation efficiency of the module by elaborating on the joints and the electrode structure while discerning the "chemistry" of metals.

What is "thermoelectric conversion" about?

FUJIWARA"Thermoelectric conversion" is not heard that often, and you may have an impression that it is hard to understand. But its mechanism is fairly simple. To generate electric current, you only have to apply the temperature gradient to both ends of a substance called the "thermoelectric conversion material." Then electric current flows from the hot side to the cold side in the case of materials called "p-type," and from the cold side to the hot side in what are called "n-type" materials. However, if you use only the elemental substance of a thermoelectric conversion material, the generated electricity is rather small and cannot be used as electrical power for general applications. In order to make it usable, you must find the optimal materials and create a "module" to efficiently extract the electricity.

Can you describe the thermoelectric conversion module developed in your latest research?

TOHEIWe started developing the module in 2011, with a focus placed on the temperature zone of around 300 to 600 degrees Celsius. Modules applicable to this temperature zone are expected to be used in incinerators and automobile mufflers. For automobiles, the electric power obtained from the heat of the mufflers may be used for electrical components such as instrument panel lights so that the fuel efficiency is improved.
However, it is rather hard to create practical products applicable to high temperature zones. In thermoelectric conversion, the higher the heating temperature becomes, the larger electric power is generated. But if the heating temperature is too high, not only can the thermoelectric conversion materials can be damaged but also the electrode joints can crack or melt. Moreover, because stress by heat is applied to the module many times, we must structure the product by taking into account its durability.

What are the differences between the joint method you developed and the conventional method? 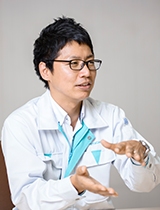 TOHEIThe biggest difference is the fact that we adopted "aluminum" as the joint material. Conventionally, it was a common practice to use silver brazing alloy for the joints when creating modules that function in high temperature zones. However, silver, the major ingredient of silver brazing alloy, is expensive and costly. Also problematic was the fact that, because melting point of the silver brazing alloy is high at about 780 degrees Celsius, certain thermoelectric conversion materials that are jointed become damaged after being jointed. These problems can be solved by using aluminum. Aluminum is not only inexpensive but also melts at 660 degrees Celsius, lower than silver brazing alloy by as much as 120 degrees Celsius.
Nevertheless, just because aluminum's melting point is lower than silver brazing alloy, it posed concerns with regards to its heatproof property. If the heatproof property is lowered, we cannot use the module at high temperatures. This leads to a smaller output of power generation than when using silver brazing alloy. To address this problem, we need to ensure that the metallic layers generated at the joint surface can withstand high temperatures. In fact, metals have a characteristic that, when they react with other metals to become compounds, they may not melt at the temperature at which they should normally melt, depending on the conditions. In our latest research, we considered how we could take advantage of this characteristic.

That is amazing that metals do not melt at their normal melting points when they become compounds!

FUJIWARAThat is indeed what is interesting with metals! As a variety of research activities have been conducted over a long time, a summarized output of the research results has become available, which explains that so-and-so combinations of metals should create so-and-so conditions. It is called the "state diagram." Simply put, it is like a divination sheet to check the "chemistry" of metals with each other. Using the diagram, you can forecast what would result when mixing three types of metals, to say nothing of the chemistry of elemental substances. But be careful, you might make a mess of things if you add too many metals. In our actual research work, we first built hypotheses by using this state diagram and then made verifications through experiments.

TOHEIIt took us a lot of time to find the appropriate conditions. However, we were finally able to make thermoelectric conversion materials, aluminum and electrodes react in an ideal manner, and successfully formed compounds that will not melt at less than 850 degrees Celsius or so at the joint sections. What is more, we obtained a new finding as a byproduct, which pleased us a lot. 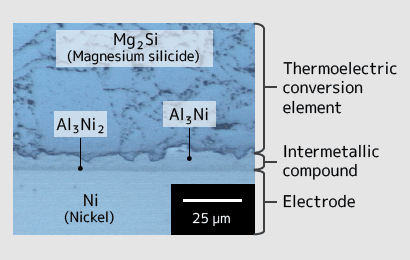 TOHEITo tell you the truth, when we made experiments for the joints, we once mistakenly set a temperature that was lower than the aluminum's melting point. We had no intention at all to make an experiment at that temperature. However, when we picked out the processed sample, we found that the aluminum had melted. We were surprised, as this was quite unexpected. We checked the state diagram again, and learned that aluminum may melt at even lower temperatures. Due to this finding, we were able to make a joint at a temperature lower than originally planned, which further reduced the damage when they were made into a module. It often happens that, when we conduct experiments, things don't go as hypothesized. Reflecting on this instance, however, it turned out to be a favorable outcome for us.

What else have you elaborated on?

TOHEIWe elaborated on how to create the electrodes. Normally, electrodes are made of a single material. But we prepared hybrid electrodes for the module we have developed, in which we combined two materials in accordance with the p-type and n-type thermoelectric conversion materials that we used. The reason why we adopted such a format is because there is a large difference in the coefficient of thermal expansion of the two thermoelectric conversion materials we used to enhance power generation efficiency. 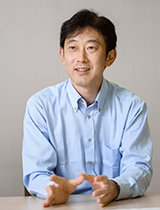 FUJIWARAWhen there is a difference in the coefficient of thermal expansion, the degree of expansion and contraction differs when higher temperatures are applied. This generates a gap. For example, if we combine two materials, one of which extends by 10 millimeters and the other one by only 5 millimeters when the temperature is raised by one degree, then a gap of 5 millimeters will arise. This gap becomes increasingly larger when the temperature is raised, and creates a force called thermal stress. Because of this, a large thermal stress is loaded on the materials to break them. In our latest research and development, we initially used an electrode made of molybdenum (Mo) alone. However, when magnesium silicide (Mg2Si), an n-type thermoelectric conversion material, was jointed to the electrode, the Mg2Si element broke into pieces. This was caused by the fact that the coefficient of thermal expansion of the Mo electrode, which is almost the same with that of silicon germanium (Si-Ge), a p-type thermoelectric conversion material, is significantly different from that of the Mg2Si element. So we reinvestigated the materials, joint method, joint processes and other factors while thinking about how we should reduce the thermal stress.

TOHEIFor modules like ours that are used in high temperature zones, how to solve the problem of thermal stress is an important issue. It is a very difficult subject to tackle, but we were able to address this issue by creating hybrid electrodes that are tuned to the coefficent of thermal expansion of the respective thermoelectric conversion materials. This enabled us to achieve a module with a power generation output that is as much as 20% higher than when Si-Ge elements were used as the sole thermoelectric conversion material.

TOHEIWe presented the research results at several scientific societies, and were honored with the 2013 Excellent Research Award by the Micro-Welding Research Committee of the Japan Welding Society. We are very grateful for these acknowledgements.

Working to commercialize the product as soon as possible

How are you going to take advantage of the results of this research and development?

TOHEIGoing forward, we must investigate the issue of "systematization," such as where to install the module and how to extract and utilize electricity. Different considerations are also needed depending on the use environment, such as in incinerators and automobiles. So we need to make up a system by taking into account the environment in which it is to be utilized. However, systematization is a big subject, and we alone cannot do the job. I think we will have to cooperate with other research divisions and business divisions.

TOHEIAs was the case in our latest research, we sometimes make new findings from our failures. So I wish to continue my efforts in research and development by testing a variety of methods without having a fear of failure. Even if we fail, we may find something new from the failure. I must be sure not to miss it.

FUJIWARAMy strongest wish is to commercialize the results we have achieved in the research. I guess there will still be many hurdles that must be overcome before commercializing the product, but I want to present it to the world as soon as possible by cooperating with people around me. Well, this is my mission, rather than a dream. On top of this, not only on this subject but also for any other research theme, I wish to advance my research and development work at a speed that matches social trends. This is the attitude I have kept and will continue to hold to going forward.