SINCE the introduction of a negative interest rate policy, Japanese banks and other financial institutions have been facing a downturn in their revenues due to lower lending rates and investment yields, with many predicted to declare losses or lower profits for the fiscal year ending in March 2017.

Faced with this business environment, many financial institutions have adopted the use of financial technology (FinTech) as their immediate strategy, while boosting non-interest income and the use of information technology (IT) for operational efficiencies. 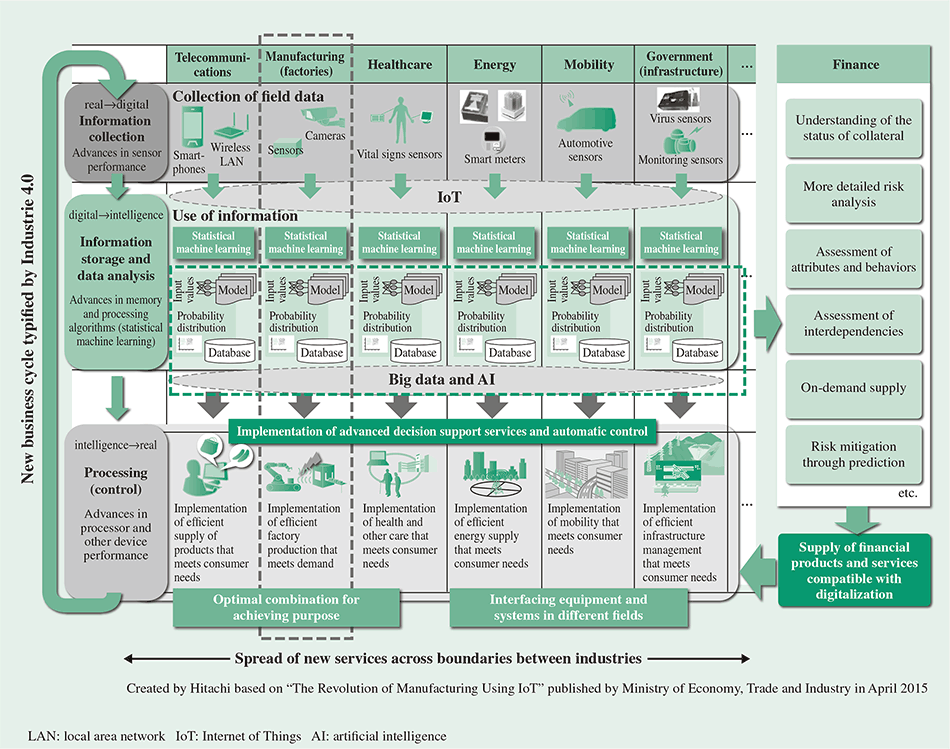 ENVIRONMENT SURROUNDING FINANCIAL INSTITUTIONS AND THE RISE OF FINTECH

SINCE the introduction of a negative interest rate policy, Japanese banks and other financial institutions have been facing a downturn in their revenues due to lower lending rates and investment yields, with many predicted to declare losses or lower profits for the fiscal year ending in March 2017.

Faced with this business environment, many financial institutions have adopted the use of financial technology (FinTech) as their immediate strategy, while boosting non-interest income and the use of information technology (IT) for operational efficiencies.

The term “FinTech” has in the past been mainly used to refer to startup companies, especially those that use IT to provide new financial services, and this trend has often been seen as a threat to the business of existing financial institutions because of the way it takes over (unbundles) certain functions of finance.

Despite this, along with the spread of open APIs(a), the new phenomenon of “rebundling” has also started to emerge with the aim of providing greater convenience by collaborating and coordinating with financial institutions.

Moreover, financial institutions have also started to make moves toward actively working with FinTech startups that have sophisticated technology or services in order to take advantage of their respective strengths, with the aim of delivering highly convenient financial services.

(a) Open API
An abbreviation of “application programming interface,” an API is a mechanism for using programs that are shared by different software to be consolidated in the form of components that can be called from applications. Because the use of APIs avoids the need to develop similar functions from scratch, it increases the speed and reduces the cost of development. Open APIs are APIs that are made available for use by third parties. Their advantages include encouraging the creation of new services that incorporate functions from the company's systems.

ADVANCES IN DIGITALIZATION AND ITS USE IN FINANCE

Meanwhile, advances in new digital technologies such as the Internet of Things (IoT), big data, and artificial intelligence (AI) are leading society and the economy with unprecedented speed.

The digital innovations in industry highlighted by Germany's Industrie 4.0(b) are spreading through a variety of fields, in a trend called “digitalization.” Japan has come up with its own concept, Society 5.0(c), which broadly recognizes this digitalization as a way to resolve societal challenges.

Business cycles (ecosystems) in which new value is created by linking many different things together, representing them as data, and collecting and analyzing the resulting large quantities of data (big data), have seen initiatives being launched for implementation in a wide range of fields along with advances in IoT technology (see Fig. 1).

As the lifeblood of the economy, finance also needs to deal with the new ecosystems that digitalization will produce.

Fig. 1—Advances in Digitalization and Its Use in Finance.

Digitalization is advancing through technological innovations such as the IoT, big data, and AI. It creates new value by representing many different things in the form of data, and by linking and combining them.

(b) Industrie 4.0
A high-tech strategy of the German government that anticipates the fourth industrial revolution. It aims to make all aspects of wide-scale industrial processes smarter and more standardized, including logistics, through the use of information technology (IT), including machine-to-machine (M2M), big data analytics, and the integration of industrial and business systems.
(c) Society 5.0
A series of measures aimed at creating a “super smart society” that can deal with the diverse needs of the public in an efficient and detailed manner through a sophisticated combination of cyberspace and the real world (physical space). The naming describes a new type of society that will be led by innovations in science and technology, following on from hunter-gatherer, pastoral-agrarian, industrial, and information.

This raises the question of what role the FinTech developments taking place in finance will play amid this overall trend toward digitalization.

The FinTech startups that have begun utilizing digital technology in financial services to supply greater convenience and efficiencies from the customer's perspective can be thought of as the pioneers of digitalization in finance.

There has been renewed awareness of the importance of the financial system to society since the global financial crisis (Lehman shock), even if in the negative sense of it having come so close to collapse, and the resultant tightening of expanded global financial regulation has forced the business of financial institutions back to a more traditional and prudent approach.

The FinTech startups that have emerged to fill this gap have expanded their businesses by winning over users. However, as they reach a certain business scale and establish a role for themselves as financial services, it is anticipated that they will find a place for themselves coexisting with or complementing the financial system made up of the existing financial institutions.

Meanwhile, these existing financial institutions are themselves taking active steps to adopt new digital technologies and are seeking to apply them in boosting their own operational efficiency and improving service.

Blockchain(d), for example, is seen as the technology that will have huge impact on the financial system and operational efficiencies. The organizations that underpin the international financial system, such as the international consortiums of major financial institutions and the Society for Worldwide Interbank Financial Telecommunication (SWIFT), are looking at applications and undertaking trials in which the technology will provide a basis for next-generation systems.

In this way, the emergence of FinTech startups and the digital initiatives of the existing financial institutions by this can be thought of as the start of genuine innovation in finance in an era of digitalization that uses digital technology to connect consumers, industry, and society (see Fig. 2).

Fig. 2—Advances in FinTech and Digitalization.

While FinTech startups from outside the finance industry have attracted interest as providers of financial services, in the process of ushering in innovations in financial business, the trend toward digitalization is also drawing in existing financial institutions, industry, government, and consumers.

(d) Blockchain
A distributed database system that serves as the basis of a virtual currency. Blockchain works by combining transaction records (deposits and withdrawals) for a certain time period together with the solution of a computational problem (which users compete to provide) into a single “block” that is sent to all users for them to keep. The name blockchain comes from the way the blocks are chained together in chronological order. The impossibility of going back and changing transaction details provides the irreversibility and prevention of duplication of transactions that is essential to a virtual currency. These attributes are also anticipated to make blockchain suitable for use in other fields.

Hitachi anticipates that the financial innovations made possible by digital technology will evolve through the following three stages.

Stage 3 is expected to involve the emergence of various service platforms, with digitalization spreading to all areas of society, and with finance, too, being required to incorporate digitalization into its products and services.

At the present time, Hitachi believes that stage 1 is in progress and that financial institutions have begun initiatives aimed at stage 2.

While the efficient and convenient financial services provided by FinTech startups are underpinned by their characteristic easy-to-use and attractive user interfaces and functions, and by a fast delivery cycle, it is also true that they do not necessarily provide all of the financial services that users want.

Recent examples can be found of seamless financial services between existing financial institutions and FinTech startups, which is achieved by linking them together via open APIs.

From the perspective of the financial institutions, these open APIs are used not only to support FinTech, but also to provide an interface for coordinating their own financial services, within their financial group and with partner companies, or with customers and others.

In the future, it is expected that progress will be made on establishing API ecosystems that provide links between businesses, with studies on issues like the standardization of interface specifications, the establishment of user authentication techniques, and security (see Fig. 3). 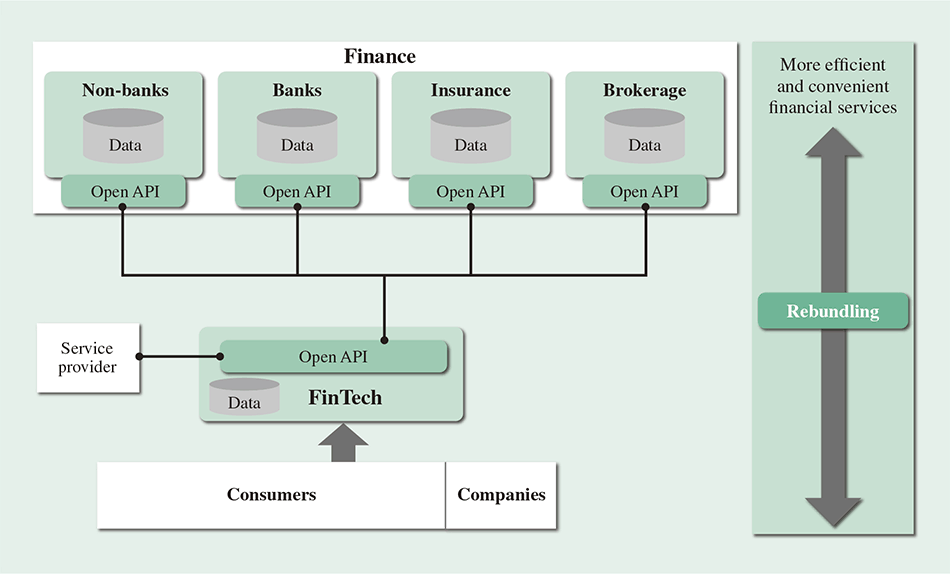 Trials involving the application of AI in finance extend from things like supporting call center operations and reducing reception workloads, to marketing analyses and fraud detection combined with big data analytics. The trials also extend to activities more closely associated with finance, such as the analysis of financial markets and investment portfolios.

Furthermore, the use of digital devices in financial services is also transforming the role of financial institution branches, not only by significantly improving the convenience of mobile banking, but also by driving major changes in how branches and automated teller machines (ATMs) are used by eliminating the need to carry cash cards and credit cards.

In the case of blockchain, studies and trials are being undertaken that involve a variety of different use cases, and while obstacles to the technology's entering widespread use in finance are being uncovered, it has come to be recognized as the technology with the greatest potential for making fundamental efficiency improvements and cost savings at financial institutions and in market systems.

Along with the progress in payment systems, the anticipated benefits of the technology include cutting costs across the financial sector and speeding up settlement services by improving the efficiency both of internal procedures at financial institutions and of the financial system as a whole (see Fig. 4). 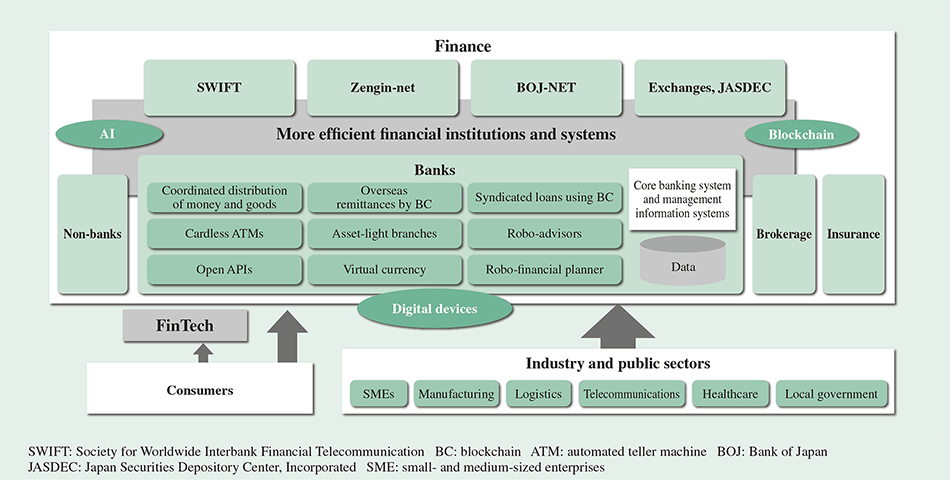 Having industry and the public sector become fully engaged with advances in the IoT, big data, AI, and other digital technologies will likely lead to numerous innovations, including new practices in the value chain from industrial workplaces to distribution and retailing; innovations in mobility; smarter healthcare, education, and government; and efficiency gains in industries like agriculture and tourism.

In the industrial sector in particular, while numerous industries are working at a global level to maintain international competitiveness, service platforms are required to support the introduction of such measures.

Service platforms provide functions for linking and combining by collecting, storing, and analyzing the large amount of data generated by IoT, and controlling data on transactions between ecosystem participants based on their relationships and dealings.

By using these service platforms, the finance industry has the potential to develop and supply innovative financial services that work with new ecosystems, achieving this linking and combining by sharing digital services and the big data of financial services users.

Moreover, these new financial services also offer the potential to differentiate financial products from those of competitors by combining them with know-how from institutions' own fields of expertise (see Fig. 5).

While it is anticipated that financial and other deregulation, will be needed to achieve this, what will also likely be necessary will be coordinated efforts by the public and private sectors so that the finance industry can achieve its own innovations along with the digital innovations of society and industry. With the expansion of the IoT, accumulation and use of big data, advances in AI, and practical uses for blockchain, platforms are being provided for these functions that enable the development of innovative financial services through mutual links, combinations, and automation.

As considered above, the digitalization that FinTech is bringing to the finance industry is also closely related to changes in industry and society, and represents a major development that presents opportunities for innovation in financial products and businesses themselves.

Hitachi is not only developing and supplying products, services, and solutions that incorporate new digital technologies to support digital financial innovation by its customers who supply financial services, but also helping transform the finance business through collaborative creation with those customers.