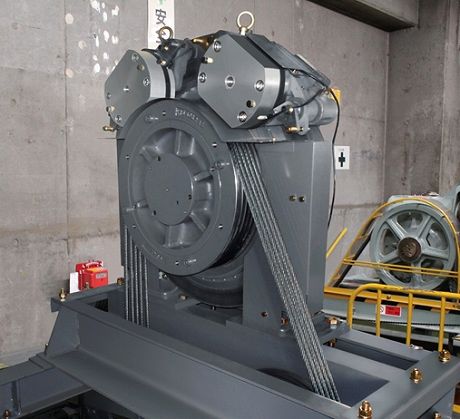 SERVING as the vertical mobility infrastructure of buildings, elevators and escalators remain in service around the clock from the time of delivery, resulting in a high risk of failure due to aging equipment. Ensuring the safety of old elevators and escalators installed over 20 years ago has become an area of public concern since these units no longer meet current regulations for safety or earthquake resistance, and it can be difficult to obtain parts for them.

One of the challenges of elevator and escalator overhauls is to find ways of minimizing the impact the work has on the business hours of office-building tenants, or on the mobility needs of daily users. Raising the money needed for refurbishing elevators and escalators can also be difficult for the owners or management associations of small- and medium-sized buildings.

The primary goal of an elevator or escalator overhaul is to ensure the continued safety and comfort of users. The work involves not only improving quality and safety, but also must consider making improvements in areas such as energy savings and convenience linked to overall building amenity.

This article presents Hitachi's modernization packages for elevators and escalators, which provide solutions to problems encountered by clients who need to overhaul aging elevators. It also discusses the earthquake resistance improvements Hitachi is making to existing escalators, and its three-dimensional (3D) site survey system, which minimizes elevator downtime during the crucial site surveys needed for overhaul work.

The photo shows the new gearless hoist model, which has two independent brakes.

To meet the demand for improved safety, the hoist has—as standard features—two independent brakes (see Fig. 1), and an unintended car movement protection device that meets current safety regulations. If, by some chance, a failure in the drive system or control equipment results in the elevator moving while the door is open, these features can detect the problem immediately and stop the elevator automatically.

The modernization package for compliance with new elevator regulations consists of four options that allow the overhaul work to be apportioned to minimize the amount of continuous downtime. Depending on the type of building, the desired work duration, or the customer's budget, the customers are free to choose from a lineup of options consisting of safety functions (such as automatic landing devices triggered during power failures), LED lighting in cars, and upgraded features for universal access.

Fig. 2—Method Used for Hoistway Lifting in the Modernization Package for Compliance with New Elevator Regulations. 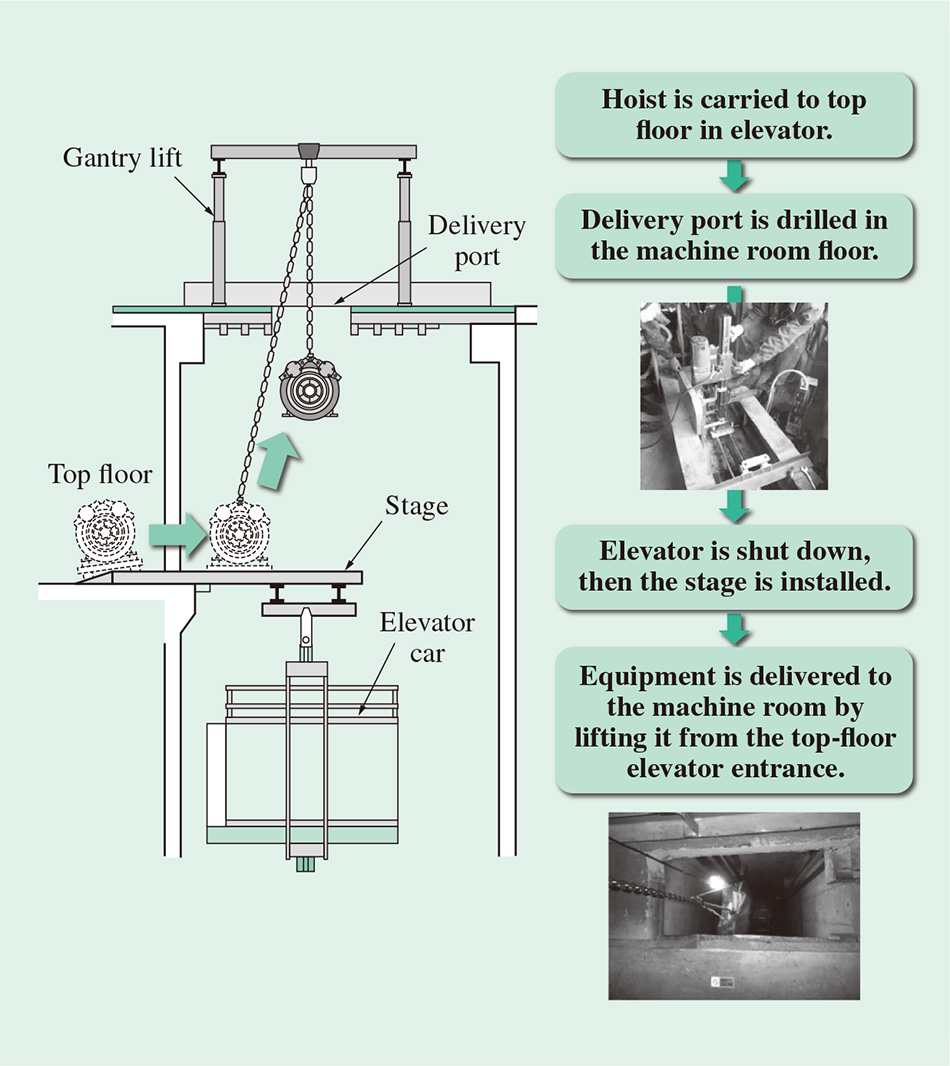 This method enables elevator installers to lift heavy objects under any building conditions.

The overhaul work performed in the modernization package for compliance with new elevator regulations has been designed with a more efficient method of lifting the hoist up to the existing top-floor machine room.

The lifting done to deliver equipment by crane or stairs in the past has been often restricted by the conditions of the building. Hitachi's new hoistway lifting method involves setting up a stage in the top-floor hoistway, and pulling up the hoist from an access port created in the machine room floor (see Fig. 2). This method is not affected by the building conditions, so it enables standardized lift plans and lowers lifting costs. 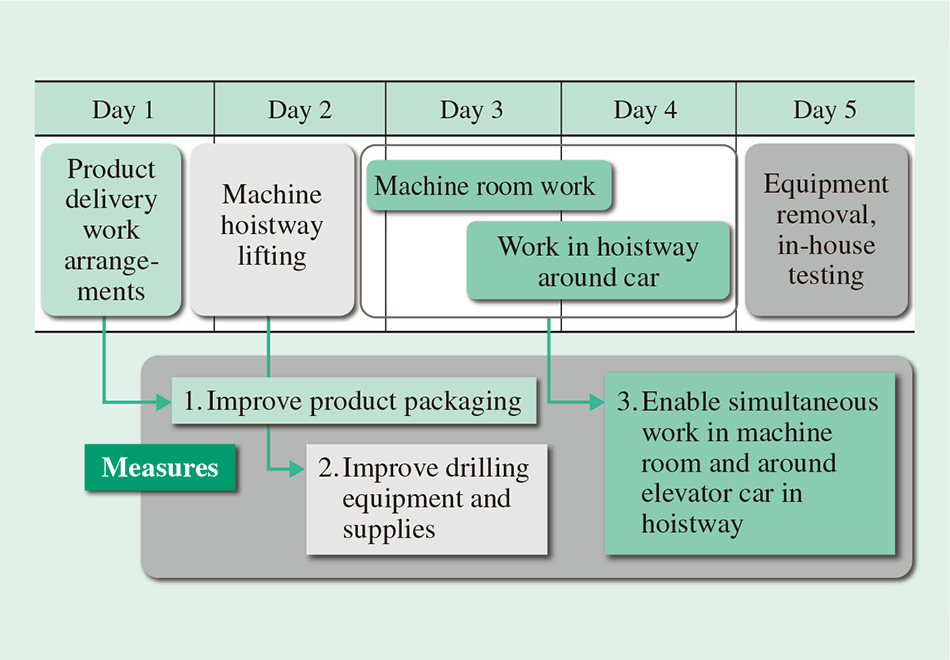 This method reduces the amount of continuous elevator downtime from seven to five days.

The basic option in the modernization package for compliance with new elevator regulations required a standard construction period with seven days of continuous downtime. This long period of downtime created a problem whereby single-elevator tenant-occupied office buildings generated clusters of work requests targeting extended holidays, such as the New Year and Golden Week holidays, which made it impossible to set construction periods at the earliest possible convenience. Many apartment building management associations and lodging facilities also wanted to have their elevators remain in service on weekends.

Hitachi responded by adopting a new work method that reduced the period of continuous downtime to five days. Work time was significantly reduced by increasing the work team from three members to four, and by eliminating waste and overburden from the work procedures. The following three measures also contributed to achieving this (see Fig. 3):

Overhauls of aging escalators have been lagging due to obstacles such as securing delivery routes during building business hours and extended periods of downtime.

The control modernization package's greatest benefit is the improvement in drive efficiency it gains by executing a rapid, partial overhaul that upgrades the operation control equipment to an inverter control system, and replaces the worm reduction gearbox with a helical reduction gearbox in the drive equipment.

The control modernization package also has an eco-mode operation function that reduces energy consumption by 13 to 20% compared with before. It works by inferring user numbers from inverter load information and imperceptibly reducing the escalator's speed (from 30 to 25 m/min) when the number of users is low.

1. Soft stop function
When an emergency stop is triggered by a safety device, the escalator stops by inverter-controlled constant deceleration instead of stopping instantly.
2. Variable speed operation system
This system provides a key switch that can reduce the operation speed from 30 to 20 m/min to enable safer use by the elderly.

Night-only Work Method that Does Not Hinder Business Hours The work schedule keeps escalators in service during the business hours of commercial building tenants.

About 70% of escalators are installed in commercial facilities, where equipment shutdowns during daytime business hours are a hindrance to business.

Hitachi's night-only work method is designed to meet the needs of these customers. Overhaul work is done at night after businesses have closed and before they open the following morning, enabling escalator use during business hours (see Fig. 4). Safety devices are upgraded by Day 3, the control panel is replaced on Day 4 (at night), and a special temporary tool used to drive the escalator with the new inverter control panel and existing drive mechanism is installed by Day 5 (during the day).

This work method has been well-received by commercial facility customers. Nearly all customers choose the night-only work method option to prevent hindrances during business hours.

The Building Standards Law Enforcement Order concerning measures to prevent escalators from falling became effective in April 2014. As a result, an increasing number of building owners began planning to retroactively upgrade existing facilities and add antiseismic reinforcement as part of their expansion or remodeling work. The new regulations call for an increase in the overlap allowance of existing escalators, which requires work on building beams. Minimizing the time and scope of this work is the goal for commercial buildings.

This structure is installed by excavating part of the building floor around the existing escalator's landing to expose the top surface of the escalator frame, and then bolting extension beams to the frame (see Fig. 5).

This structure is also installed by excavating part of the building floor around the existing escalator's landing to expose the top surface of the escalator frame. An extension plate is then bolted to the frame (see Fig. 6).

It is an effective method when a shutter or wall near the escalator's entrance makes it impossible to accommodate the user traffic flow when using the extension beam structure. 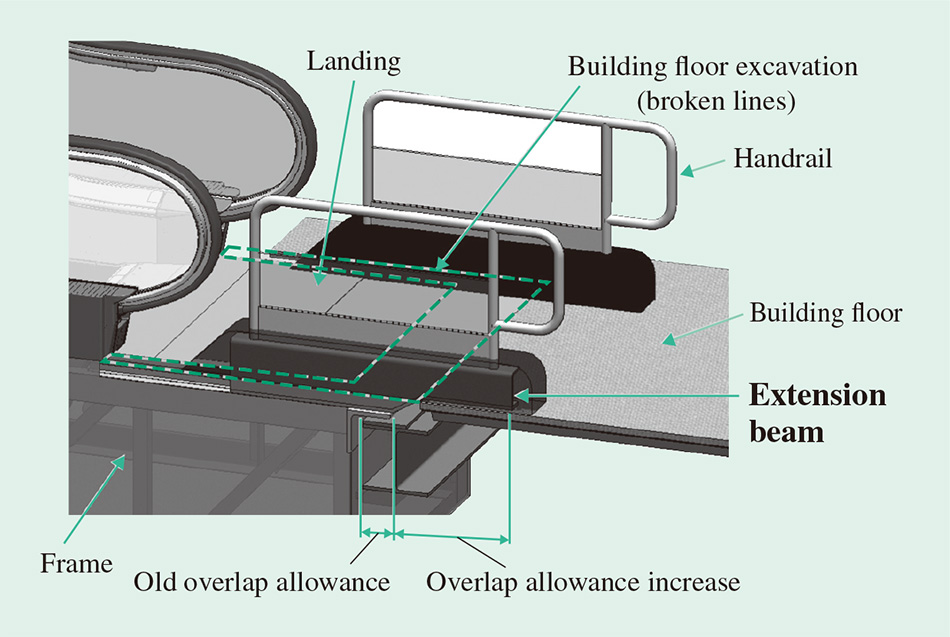 The figure shows how the extension beams are bolted to the escalator’s frame to increase the overlap allowance. 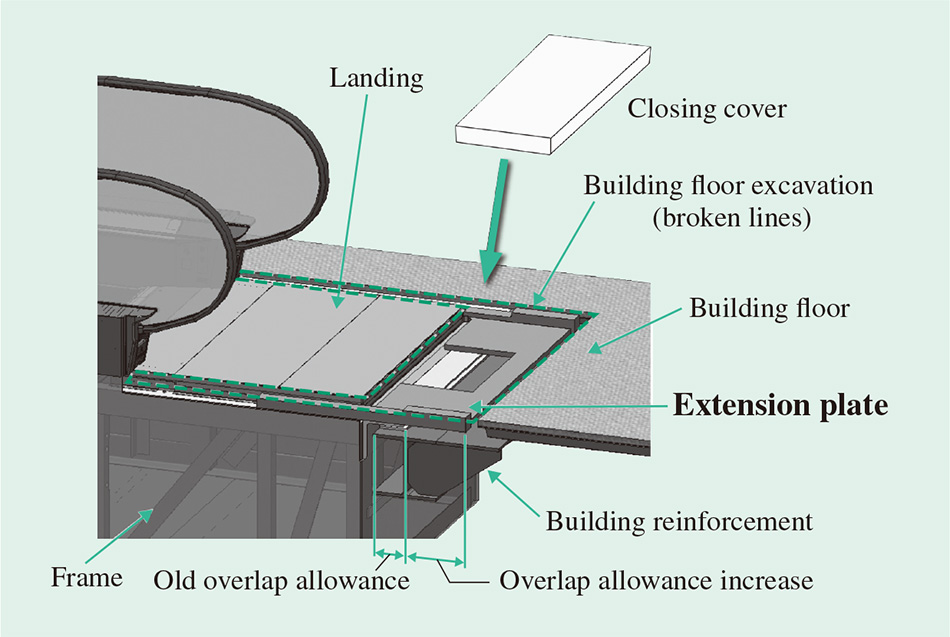 The figure shows how an extension plate is bolted to the escalator’s frame to increase the overlap allowance. Hitachi’s 3D site survey system automatically recognizes walls and other structures in the hoistway from 3D measurement data. The coordinates of each position are used to automatically output a table showing the dimensions of the measurement locations needed for the site survey.

Hitachi has created a site survey system that uses a 3D measuring instrument to survey the site of an existing building when modernizing elevators(4).

Hoistway dimensions were previously measured manually one at a time by specialist engineers, whereas a 3D measuring instrument can measure the entire interior of a hoistway in a single operation, reducing the time needed for measurement.

Hitachi's 3D site survey system uses proprietary technology to automatically recognize structures from the 3D data generated by the measuring instrument. The positions of wall surfaces, rails, and access points are identified, and the dimensions are automatically calculated. This data is used to automatically create drawings used to plan the fitting (see Fig. 7).

The surveyed data is centrally managed by a dedicated server, and the data analysis work is all done by a single specialist department to improve work efficiency.

While previous site surveys for standard elevators took about 90 minutes, Hitachi's 3D site survey system can reduce the time needed to about 30 minutes. Since it has also automated processes ranging from checking the site survey dimensions to creating the study drawings, it has greatly reduced the lead time needed for design or work estimates from 4 hours to 30 minutes or less.

Hitachi intends to continue to provide safe and comfortable environments for all building users through its elevator and escalator modernization packages.