R&D of Elevator for Large Skyscrapers

R&D of Elevator for Large Skyscrapers

Completed in 1968, the Kasumigaseki Building in Tokyo pioneered skyscraper construction in Japan. Hitachi supplied the building with Japan’s fastest elevator at the time, which had a speed of 300 m/min. Hitachi constructed a research tower for the project, and used it to begin developing ultra-high-speed elevators. In 1993, Hitachi set a world speed record with the development of an elevator that had a speed of 810 m/min, and it has continued to develop some of the world’s most cutting-edge elevators to the present day. Continuing Hitachi’s unbroken tradition of pioneering elevator technology, the latest research tower was completed in 2010, and was used to develop an ultra-high-speed elevator (1,200 m/min) in 2016. This article presents the history of Hitachi’s elevator R&D work. 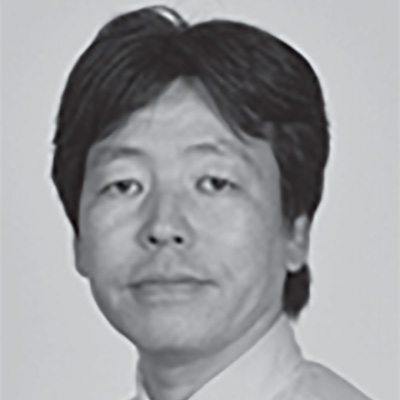 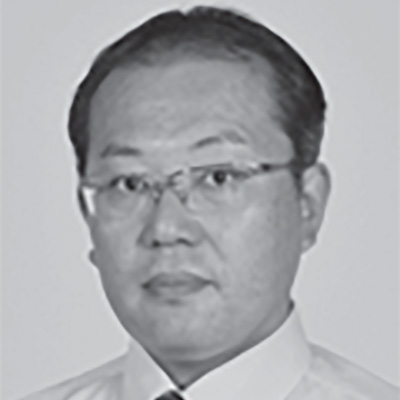 AFTER some adjustment work, the ultra-high-speed elevator that Hitachi, Ltd. supplied for the Guangzhou CTF Finance Centre (a mixed-use skyscraper in Guangzhou, China) finally reached its rated speed of 1,200 m/min (72 km/h) in May 2016(1). Setting a new world speed record for elevators*1, the elevator embodies the cutting-edge technology development ambitions that have been passed down through Hitachi's elevator development work.

START OF THE ULTRA-HIGH-SPEED ERA

The old research tower is 90 m tall and was completed in 1967. It is still used for elevator development.

The construction of skyscrapers in Japan became possible after a 1963 amendment to the Building Standards Act eased the height restrictions on buildings. At the same time, the new skyscrapers were accompanied by demands for speed and capacity improvements in elevators, which serve as the mobility infrastructure within buildings, leading to the beginning of ultra-high-speed elevator development.

Developing high-speed elevators that are suitable for use in skyscrapers required the construction of special elevator research towers of adequate height. Hitachi built its first research tower (hereafter, “old research tower”) when it won an order to deliver elevators for Japan's first skyscraper, the Kasumigaseki Building (see Fig. 1)(2).

The Kasumigaseki Building's developers were looking for elevators that were capable of traveling at a speed of 300 m/min, double the domestic speed record at the time, which was 150 m/min. To meet this requirement, Hitachi made extensive use of the old research tower to overcome a large number of challenges, such as developing speed control technology for precise motor control, emergency stop equipment for safe emergency shutdowns, noise and vibration reduction measures for ride comfort, and group control technology for efficient control of multiple elevators(3), (4). The beginning of Japan's skyscraper era also marked the beginning of a rivalry among elevator manufacturers who competed to create ever faster models.

Rise in Concern for Energy-saving

After the Kasumigaseki Building project, Hitachi continued to set new elevator speed records. In 1974, it delivered an ultra-high-speed elevator with a speed of 540 m/min (the world record at the time) for the Shinjuku Sumitomo Building.

But as the two oil crises of the 1970s turned public attention in the world toward saving energy, elevator manufacturers also changed course to focus more on this area and less on speed. Hitachi started developing elevators with dramatically lower energy consumption. Elevator drive systems were switched from DC motors to induction motors and given inverters, while microcontrollers took over as the control systems (see Fig. 2)(3). In 1991, Hitachi delivered an ultra-high-speed (540 m/min) inverter-controlled elevator for the Tokyo Metropolitan Government Buildings. By that point in time, all Hitachi elevators had become inverter-driven models designed to save energy. 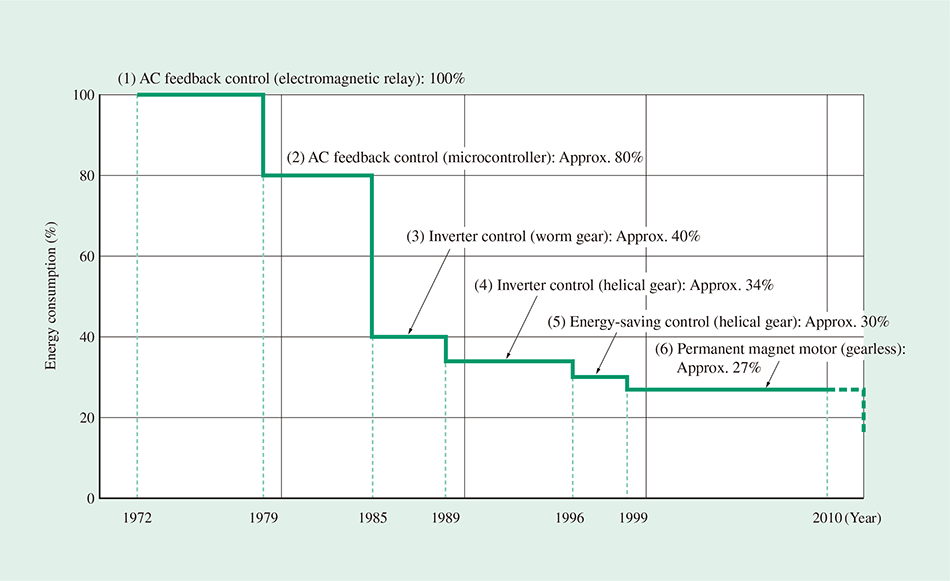 The chart shows the improvements made in energy consumption to Hitachi’s low- and medium-speed elevators.

Introduction of Simulations and Testing Equipment

Another trend of this era was the rapid rise of computer-driven simulation technology (known as computer-aided engineering, CAE). By enabling computer representation of various real-world physical phenomena, the new technology provided an alternative to collecting test data by testing physical elevators. It became possible to obtain test data by using CAE analysis together with component testing equipment that reproduces some of the functions of the actual elevator.

Without CAE, for example, testing an elevator for a skyscraper that is over 500 m (100 stories) tall requires a research tower of nearly the same height, and an elevator that is capable of speeds of over 540 m/min. But, since the old research tower was not tall enough to test elevators of this speed, Hitachi needed to use CAE analysis to simulate various test conditions such as speed that were not supported by the existing physical equipment. CAE made it possible to use computer analysis to study a wide range of areas such as strength, drive control, noise, and vibration. Individual functions such as motor speed control, braking, and emergency braking could be checked using component testing equipment to research and develop each new elevator model.

This new technology enabled Hitachi to develop next-generation ultra-high-speed elevators in preparation for new skyscrapers of 100 stories or more. In 1993, it developed an elevator with a speed of 810 m/min(5). Fig. 3 shows the main component testing equipment used in its development, which enabled the following drive control milestones: 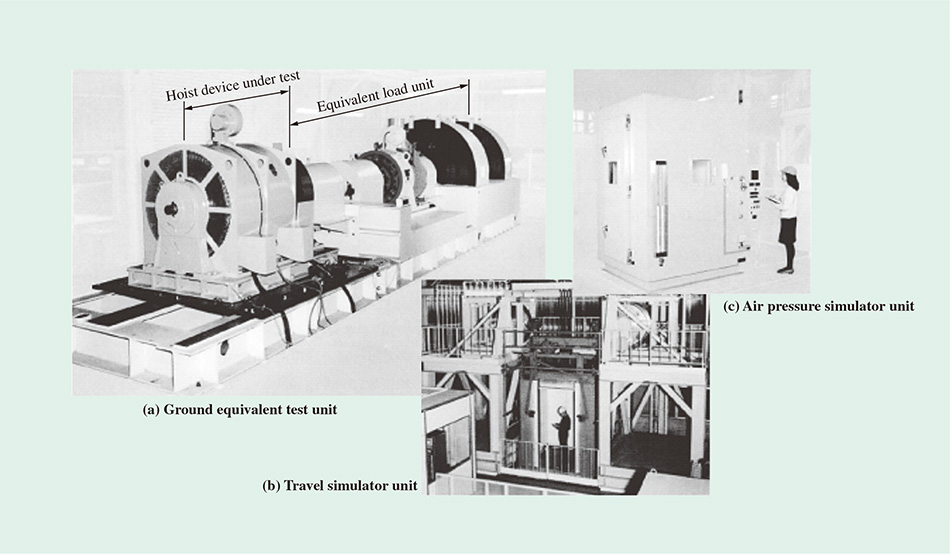 Photo (a) shows the ground equivalent test unit that was used to couple the load equipment directly to the hoist shaft, and to drive the hoist with a drive control inverter. It drove the hoist at the rated elevator speed (development target speed) to enable checking of the speed control and brake performance. Photo (b) shows a suspended elevator car with guide equipment mounted on the left and right of it, and a travel simulator with a disk installed instead of a guide rail. The disk was driven by a motor to simulate elevator travel conditions. Rocking the disk to reproduce car vibration caused by guide rail bending enabled study of technology for improving ride comfort. Photo (c) shows an air pressure simulator used to research the ear blockage (or pressure) sensations riders experience due to air pressure differences in the building when traveling long vertical distances at high speed.

Fig. 4—Exterior and Interior of the New Elevator Research Tower. 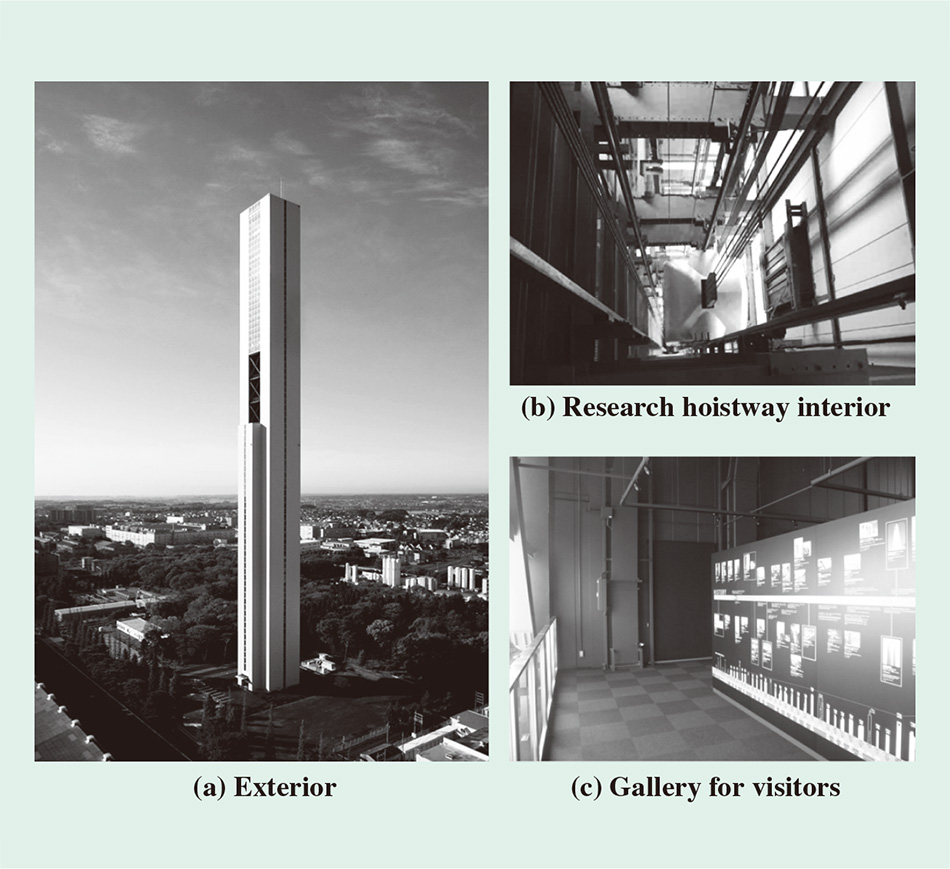 Photo (a) shows the exterior of the new 213 m tall research tower, and photos (b) and (c) show the interior. The tower contains nine hoistways for use in research. Completed in April 2010, it was struck by the Great East Japan Earthquake less than a year later but escaped damage because it was designed to withstand the seismic energy received.

The start of the 2000s saw rapid economic growth in Asian and Middle Eastern countries that created massive markets for ultra-high-speed elevators(6). Ongoing skyscraper construction booms, particularly in the markets of the Middle East and China, have started a second era of elevator speed competition among manufacturers.

In response to plans for skyscrapers of over 1,000 m tall and the release of elevators with speeds exceeding 1,000 m/min, Hitachi built a new elevator research tower in 2010 to boost its competitiveness in the global market (see Fig. 4)(7). Testing an elevator's emergency stop equipment (one item of safety equipment) requires a drop distance proportional to the target travel speed, so the need for more height was the primary motivation for building the new research tower.

Another reason for its construction was to minimize the differences between the physical test conditions and the CAE analysis conditions to enable research on unachieved speeds and loads. For example, when attempting to accurately predict elevator car noise and vibration values for an ultra-high travel speed of 1,000 m/min using CAE analysis, being able to measure source test data for speeds such as 600 m/min and 800 m/min enables a smaller degree of error than measuring data for a speed of 360 m/min. 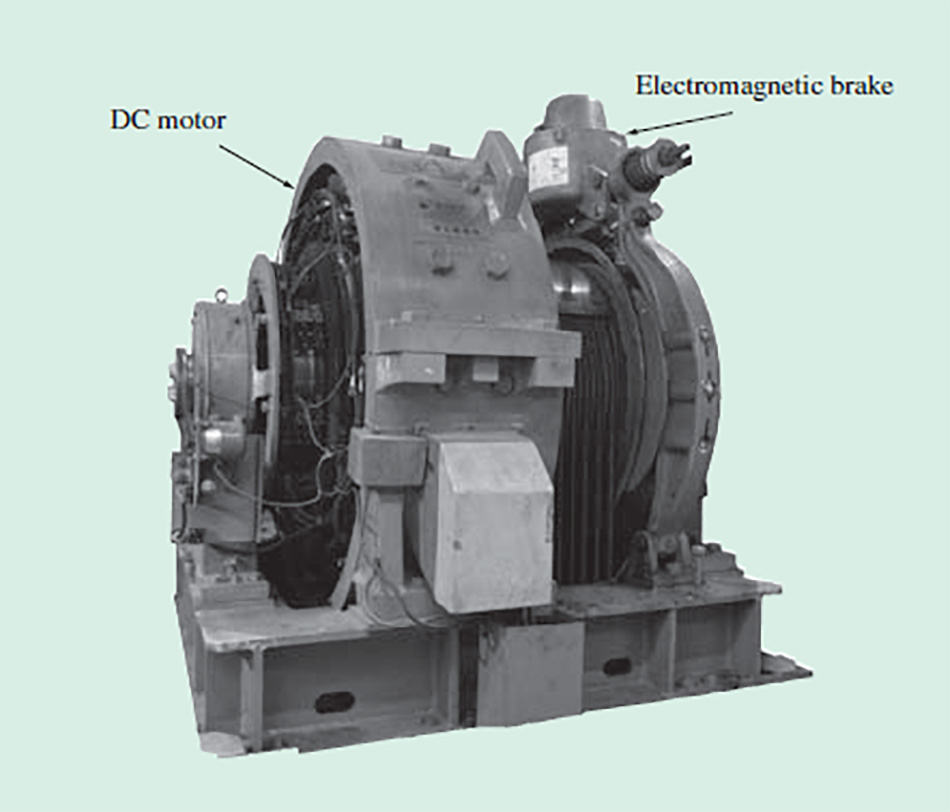 The photo shows a gearless hoist that combines a DC motor with an electromagnetic brake. The hoist weighs about 9 metric tons and has a rated output of 60 kW.

This article has looked at the history of Hitachi's R&D work on ultra-high-speed elevators, focusing on testing equipment.

When the Kasumigaseki Building's elevators were modernized recently, the first of its 300-m/min elevator hoists (in service for about 50 years) was exhibited in the new research tower (see Fig. 5). As a piece of Hitachi's roughly 50-year history of ultra-high-speed elevator R&D, the hard toil embodied by this veteran hoist made for a deeply moving exhibit.

Hitachi will continue to overcome challenges and work on R&D designed to produce the best elevators in the world.

The authors would like to express their heartfelt appreciation to Mitsui Fudosan Co., Ltd. for its assistance with the exhibit of the Kasumigaseki Building elevator hoist.