Reviewing the compliance of Japanese boiling water reactors (BWRs) with new regulatory standards involves reviewing the reactor installation license (or its amendment), the construction plans and the operational safety program in relation to standards which have been strengthened in light of the lessons learned from the Fukushima Daiichi nuclear disaster. For the BWRs that are currently undergoing a review of their installation license (or its amendment), measures to ensure compliance with the new regulatory standards and improve safety are being implemented at a quick pace. Those consist mainly of countermeasures against natural disasters, such as reinforced earthquake protection for facilities of high safety importance, measures for dealing with major accidents, such as the installation of the filtered containment venting facility, and countermeasures against terrorist attacks, such as aircraft impact protection. The Hitachi Group has been involved in this process at every stage, from new technological development to design and construction, committing thorough efforts for implementing the measures against such broad variety of severe accidents.

Out of a total of ten reactors that have applied for reactor licenses with the Hitachi Group’s support, six are currently in the process of having their licenses or their amendments reviewed. This figure includes the No. 6 and No. 7 reactors at Tokyo Electric Power Company Holdings’ Kashiwazaki-Kariwa Nuclear Power Station. Hitachi will continue providing utmost support for the safety screening of BWRs and helping further improve nuclear power plants’ safety through the development of safe technology. 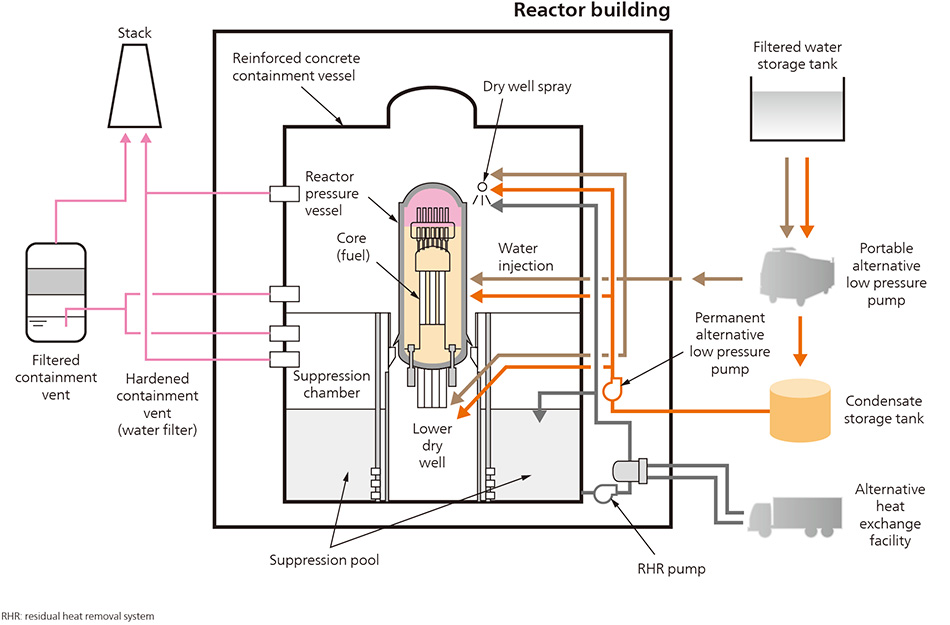 2. Involvement in the Construction of New Nuclear Power Stations in the UK

Moves to rebuild new nuclear power stations to replace aging facilities are picking up pace in the UK. Hitachi, Ltd. acquired the UK nuclear energy supplier, Horizon Nuclear Power, Ltd., in November 2012, and formulated a plan to build two or three 1,300 MW reactors at each of the two sites, Wylfa Newydd and Oldbury, in the UK. Commercial operation at Wylfa Newydd will commence within the first half of the 2020s. The licensing process, known as the Generic Design Assessment (GDA), for the UK advanced boiling water reactor (ABWR) is currently in the fourth and final stage and is scheduled for completion in December 2017.

As part of its strategy to enhance its presence for engineering, procurement and construction (EPC), Hitachi established Hitachi Nuclear Energy Europe, Ltd. (HNE) in January 2016. In May 2016, the Menter Newydd consortium consisting of HNE, JGC Corporation (UK), Ltd., and Bechtel Management Company, Ltd. was appointed as Horizon’s supplier. Hitachi will cooperate with each of these companies in the execution of the engineering work to ensure the successful completion of the project.