Demand for better real-world fuel economy has created high expectations for systems such as eco-drive that control the engine and transmission in response to driving conditions. Hitachi is developing integrated powertrain control systems that improve real-world fuel economy through optimum control of the powertrain, using the external sensing technology of autonomous driving and driver assistance systems to anticipate the conditions in front of the vehicle. 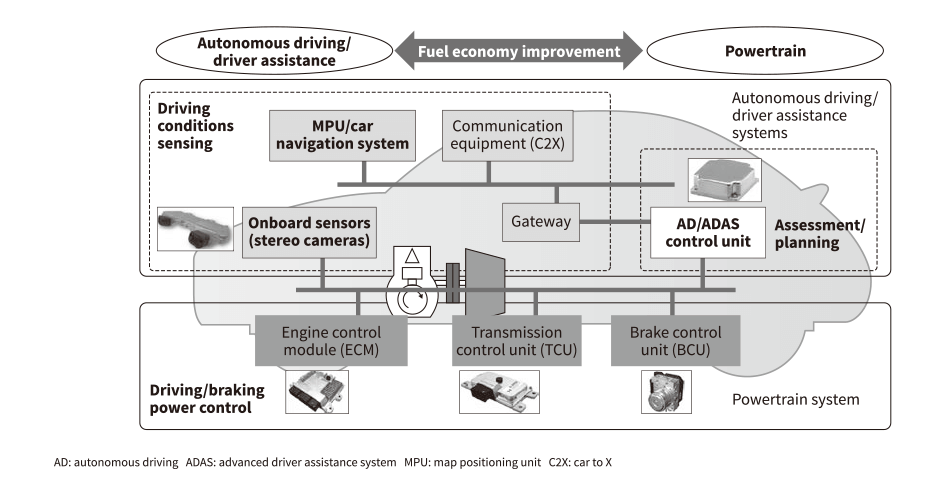 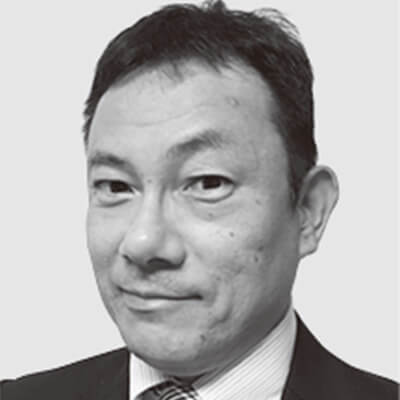 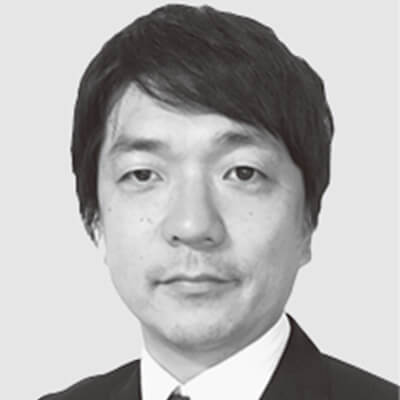 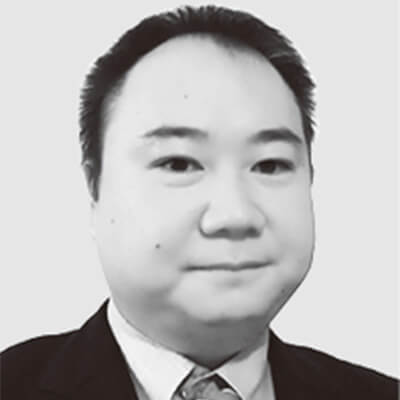 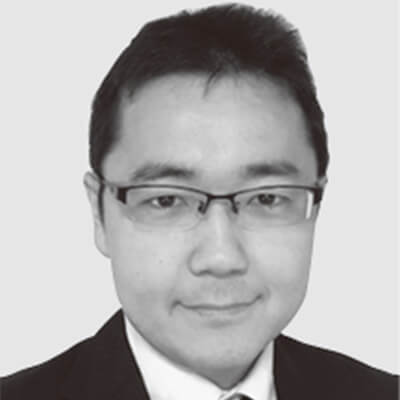 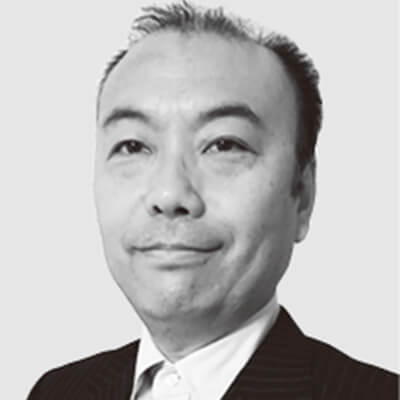 Environmentally motivated calls to lower vehicle CO2 emissions are creating increasing demand for technologies that improve real-world fuel economy. Better real-world fuel economy can be achieved by increasing the efficiency of the powertrain (composed of the engine and transmission), as well as vehicle control methods such as eco-drive, which change powertrain operation in response to driving conditions(1), (2). Accurately identifying the driving conditions is a key requirement for achieving these control methods. Technologies designed to ensure safety and comfort by reducing traffic accidents and driver fatigue are also being developed to enable autonomous driving and advanced driver assistance systems with features such as collision avoidance, vehicle-following, and lane departure prevention. The driving conditions sensing technologies needed to ensure safe and comfortable driving judgements are being developed for driver assistance and autonomous driving systems.

This article presents the systems and technologies Hitachi Automotive Systems has developed to improve real-world fuel economy by using powertrain technologies that control vehicle operation directly, and integrating them with autonomous driving/driver assistance technologies that anticipate/assess the conditions in front of the vehicle. A specific example of a developed system is also provided.

This section looks at the system Hitachi Automotive Systems is proposing to improve real-world fuel economy by integrating autonomous driving/driver assistance technologies with powertrain control. It presents the configuration of this system and the technologies behind it, and summarizes how the system controls the vehicle to improve fuel economy.

Figure 1 shows the configuration of the integrated system. The system is composed of an autonomous driving/advanced driver assistance system designed for safety and comfort, along with a powertrain system that provides optimum vehicle control in response to the driving conditions sensed by the autonomous driving/advanced driver assistance system and a set driving plan. The two systems are integrated to optimize the vehicle's operation in response to the driving conditions, improving fuel economy.

As shown in the diagram, the autonomous driving/advanced driver assistance system is composed of a part for sensing the driving conditions that senses the conditions around the vehicle, and a part for judgement and planning that sets the driving plan in response to the sensed information. The key components used for sensing the driving conditions and for judgement and planning are onboard sensors, a high-precision vehicle position detector, communication equipment, and an autonomous driving/advanced driver assistance control unit. The core components Hitachi Automotive Systems has developed are the onboard sensors, map positioning unit (MPU), and autonomous driving/advanced driver assistance system (AD/ADAS) control unit. The onboard sensors are devices such as stereo cameras and millimeter wave radar that sense the driving conditions by sensing the preceding vehicle and acquiring multiple items of information such as relative speed and relative distance. The MPU is a high-precision vehicle position detector that acquires high-precision vehicle position information and detailed road information. The AD/ADAS control unit provides control applications such as vehicle-following, lane keep control, and auto lane change.

The powertrain system is composed of the engine and transmission, which control the vehicle's drive/braking power. The core components Hitachi Automotive Systems has developed and released are the engine control module (ECM), transmission control unit (TCU), and brake control unit (BCU). The ECM is composed of parts and control units that provide high-precision control of the engine. The TCU controls the transmission's gear ratio and clutch, while the BCU controls the deceleration at the same time. These components have been used to develop a high-efficiency powertrain system that improves fuel economy.

Figure 2 provides an overview of the integrated functions for improving fuel economy (the main topic of this article). Better fuel economy has been achieved by using the driving conditions sensing results provided by autonomous driving/driver assistance technologies to create a driving plan for low fuel consumption, and using the plan to control the operation of the powertrain (engine and transmission).

The integrated system senses the driving conditions by using stereo cameras and other onboard sensors employed for autonomous driving/driver assistance to acquire information about the preceding vehicle (such as relative distance and relative speed); using the MPU to acquire road information (such as road gradient and maximum speed); and using the communication equipment to acquire information about upcoming traffic conditions and the like. The system then uses the information acquired about the conditions in front of the vehicle to formulate a driving plan for reducing fuel consumption. The plan incorporates settings to reducing unnecessary acceleration/deceleration or settings for optimum vehicle speed determined by analyzing the vehicle's speed/position relative to the preceding vehicle and relative to the road information. The plan also includes elements such as a vehicle operation pattern enabled by a coasting function (sailing-stop) that actively stops the engine and releases the clutch. Real-world fuel economy is improved by making a judgment about the vehicle's current driving situation and automatically providing energy-saving operation according to that situation.

In Scene 3, fuel consumption is reduced by releasing the accelerator pedal earlier. In Scene 4, fuel consumption is reduced by reducing unneeded acceleration/deceleration by vehicle control according to the traffic flow/traffic density ahead. So, better real-world fuel economy can be achieved by providing energy-saving vehicle operation according to individual driving situations. In other words, it should be possible to achieve a system that improves real-world fuel economy by combining the driving conditions sensing technologies of autonomous driving/advanced driver assistance systems with powertrain control that enables low-energy operation.

Example of the Developed System

This section describes a specific example of a system developed by Hitachi Automotive Systems that integrates a cruise function with a powertrain control (sailing-stop) function(3), (4). The cruise function uses stereo cameras to sense the preceding vehicle and execute control such as vehicle-following, while the powertrain control function shuts off the engine during vehicle operation to reduce fuel consumption.

Configuration and Control of the Developed System

Figure 4 summarizes the configuration and control blocks of the developed system. The system acquires information about the conditions in front of the vehicle by using stereo cameras to acquire the vehicle's distance/speed relative to the preceding vehicle, and by using maps to acquire gradient, maximum speed, and distance information. Speed control and vehicle-following control are used to perform automatic acceleration/deceleration control for operations such as maintaining speed and vehicle-following. The system controls the vehicle to keep its speed within the set range (when executing speed control), or keep its following distance within the set range (when executing vehicle-following control). 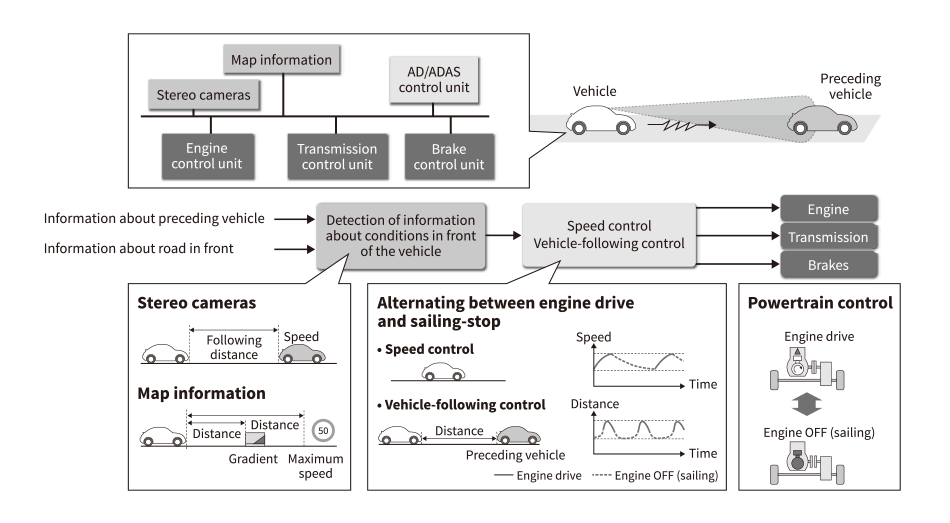 The system controls the vehicle to keep it within the set speed and following distance ranges by alternating between engine drive and sailing-stop. It uses stereo cameras to acquire the distance/speed relative to the preceding vehicle, and uses map information to acquire gradient, maximum speed, and distance information.

Verification of the Developed System's Effect on Fuel Economy 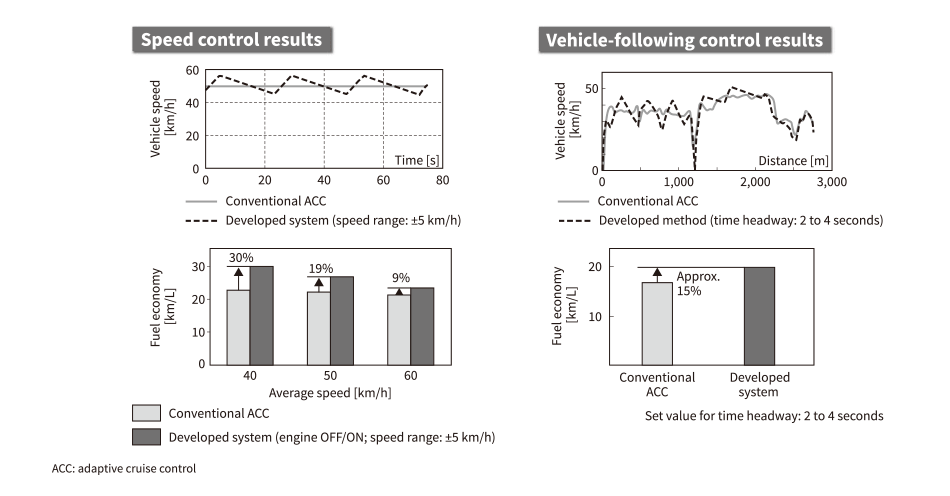 The diagrams on the left compare the results obtained when maintaining a constant vehicle speed using conventional adaptive cruise control (ACC), and when maintaining the same average speed using the developed system. The speed range is set to ±5 km/h in the developed system. This system has speed fluctuation, but better fuel economy than the conventional ACC function.

This article has looked at systems for improving real-world fuel economy and the technologies behind them. These systems work by using external sensing technology to anticipate the conditions in front of the vehicle and to control the powertrain. A specific example of a system developed by Hitachi Automotive Systems was also presented, and its effect on fuel economy was described to show its effectiveness.

Hitachi Automotive Systems will continue to develop driver assistance systems incorporating elements that balance safety, comfort, the environment, and time. We will contribute to the realization of a prosperous society by creating new value for “humans, vehicles, and society”.