1. Visualization of Data Relationships for Analysis of Railway Operations

The railway industry has a growing demand for utilizing data to improve operational efficiency and service, such as the maintenance of track and rolling stock or increasing the frequency of train services. Accordingly, Hitachi has developed a technology for the visualization of data relationships in the analysis of railway operations that can combine data from different business systems to perform cross-functional analyses.

In the past, business system data was collected within individual departments, meaning that interdepartmental analysis required the selection of the required data from the large numbers of data items held by other departments. This made analysis difficult because they would not know what the different data meant unless the person doing the work was familiar with all the relevant activities. In response, Hitachi has developed a relationship visualization technique to simplify data analyses that span different activities. The technique assists with the understanding of data by using metadata, value sets, and so on to identify the relationships between data, presenting them as a network graph showing where meanings are the same or strongly correlated, for example.

In the future, Hitachi intends to help make transportation services more efficient and sophisticated by supplying products that incorporate this technique.

1. Visualization of data relationships for analysis of railway operations

2. Overview of wireless signalling system for railways with ring topology

Railway signalling systems have been used to ensure train safety since before the advent of wireless communications. Used to control the intervals between trains and their movements, these systems have, for the most part, adopted a star architecture in which a central controller located in the equipment room at a railway station controls a large number of wayside devices. However, by having the onboard devices in trains exchange information and maintain their own safety autonomously, it should be possible to eliminate the central controller and thereby significantly reduce lifecycle costs.

Accordingly, Hitachi has designed a signalling system that allows trains to run on any sections of track they can use safely while avoiding those sections being occupied by other trains. It does so by taking advantage of the rapid advances in wireless communication over recent years to share information about train movements between the onboard devices in trains and the point machines at stations. Specifically, the system works by combining safety information that includes the sections of track being used by each train and the lock status of each point machine in a single message packet, and circulating that information around all of the other onboard devices and point machines for which it is relevant. The results of the safety analysis of train interval and routing control using this ring-based message-passing by using safety analytical techniques such as fault tree analysis (FTA) and failure mode and effect analysis (FMEA) were assessed by the Railway Technical Research Institute and there was no evident safety problem found with this approach to system safety assurance.

In the future, Hitachi intends to implement this technology for railway operators in Japan and elsewhere in the form of signalling systems that use less equipment while still allowing flexible railway operations.

3. Identification and Tracking of Individuals for Public Safety

While large numbers of security cameras are being installed in a variety of locations amid rising demand for safety and security in Japan and elsewhere, monitoring of the resulting footage is still largely done by human beings. As future increases in the number of security cameras will only add to the burden on human staff, there is a need for the use of video analysis techniques to reduce the workload.

In response, Hitachi has developed a technique that uses artificial intelligence (AI) to identify more than 100 different attributes of individuals, including their gender, age group, type and color of clothing, and carried items, in roughly 1/40th of the calculation time required previously, and another that uses full-body images to identify an individual in large amounts of video footage with approximately three times the search accuracy of previous methods.

This technology can reduce the workload associated with checking surveillance camera footage by performing rapid searches of surveillance video covering a wide area, with the ability to identify individuals who match characteristics obtained from eyewitness accounts, and by tracking the detailed movements of individuals even when using images that do not show their face, such as those captured from behind or at a distance.

In the future, Hitachi intends to contribute to public safety and security by incorporating the technology into crime-prevention systems that assist with the protection and monitoring of public places.

3. Technology for identification and tracking of individuals for public safety and how it is used 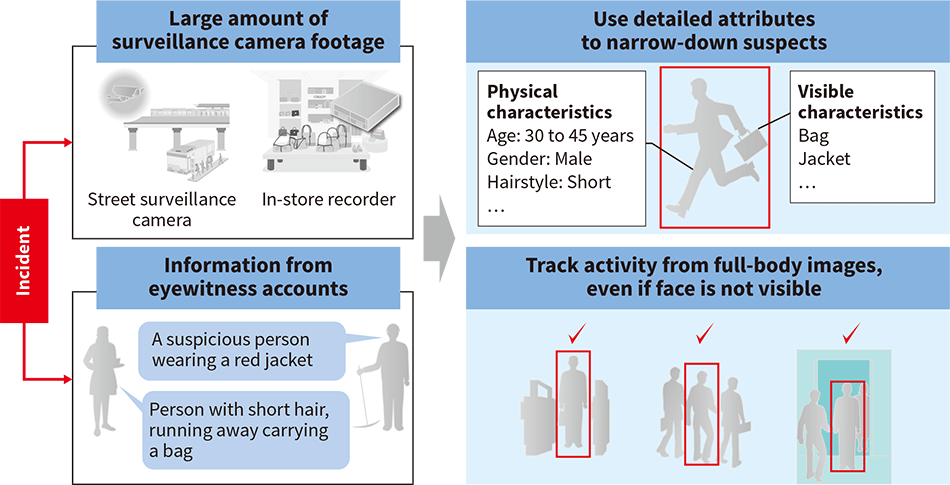 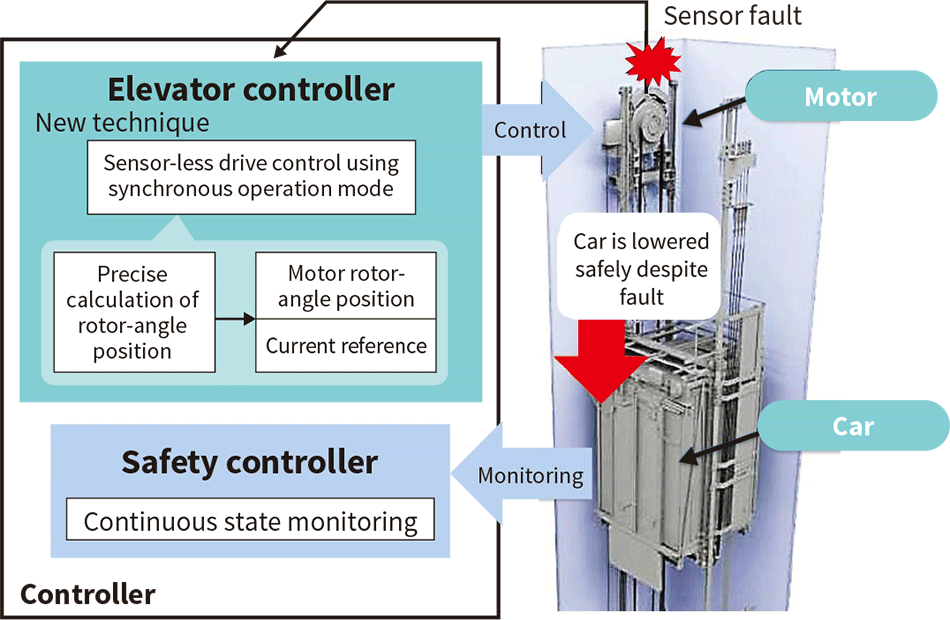 Elevators have become vertical transportation systems in buildings and an essential part of the infrastructure in urban life, especially in the cities of Asia where high-rise buildings are increasingly being built. Consequently, recovery time needs to become shorter when any faults occur in elevators. Hitachi has developed an advanced sensor-less drive control technique that automates some of the recovery procedures that were previously implemented manually; as a result, recovery time is decreased when any faults occur in the sensors on the motor in elevators.

The new technique is able to continue driving the motor by using synchronous operation mode and estimating the rotor-angle position of the motor in the case of faults in these sensors. The proposed system also uses a precise electronic safety system featuring microcomputer control to perform continuous state monitoring of parameters such as car position and speed. By using both the sensor-less drive control technique and the state monitoring by the electronic safety system, the elevator car operation can be quickly and safely recovered in case of faults.

In the future, Hitachi plans to further improve service by continuing to develop this control technique. The technological development of fully autonomous driving is accelerating: Level 3 (Conditional Automation) systems have already passed to the industrialization phase and Level 4 (High Automation) systems will be commercially available soon. However, automated and manually-driven vehicles will continue to co-exist for a while after 2030.

Hitachi Europe has developed technologies for cooperative autonomous driving under the EU project “AutoNet2030”. Since the goal of the project is to achieve cooperation among vehicles and communication is the core technology, Hitachi developed an extension of the Vehicle-to-Vehicle (V2V) communication protocols for cooperative autonomous driving and a High Definition e-Horizon component that combines data from maps and sensors (including V2V) and provides them in an efficient way to the vehicle controlling algorithm. A demonstration was performed during the final project event in October 2016 on a test course in Sweden, in which a V2V-enabled manually-driven vehicle from an adjacent lane joined a cooperatively-driven convoy, composed of an automated passenger car and an automated truck, and then departed smoothly. Hitachi, which also provided the automated passenger car, intends to work on standardizing the developed technology and on its early implementation.

Countries around the world are tightening regulations aimed at reducing emissions of carbon dioxide, nitrogen oxides, and other pollutants, bringing rising demand for electric and other vehicles with superior environmental performance. Hitachi has now developed an automotive inverter for electric vehicles (EVs) and plug-in hybrid electric vehicles (PHEVs) that has twice the power density of previous models.

As inverters require small size and high output, improving the heat dissipation performance of their power modules is vital. To achieve this, Hitachi has developed a power module (the module in which the power semiconductors are mounted) that features direct water cooling of the heat dissipating fins on both its sides. By increasing cooling performance by 35% over the previous model with fins on only one side, this enables the inverter to have a higher power density.

In the future, Hitachi intends to continue improving the performance of its inverters to reduce the load on the environment through vehicle electrification. 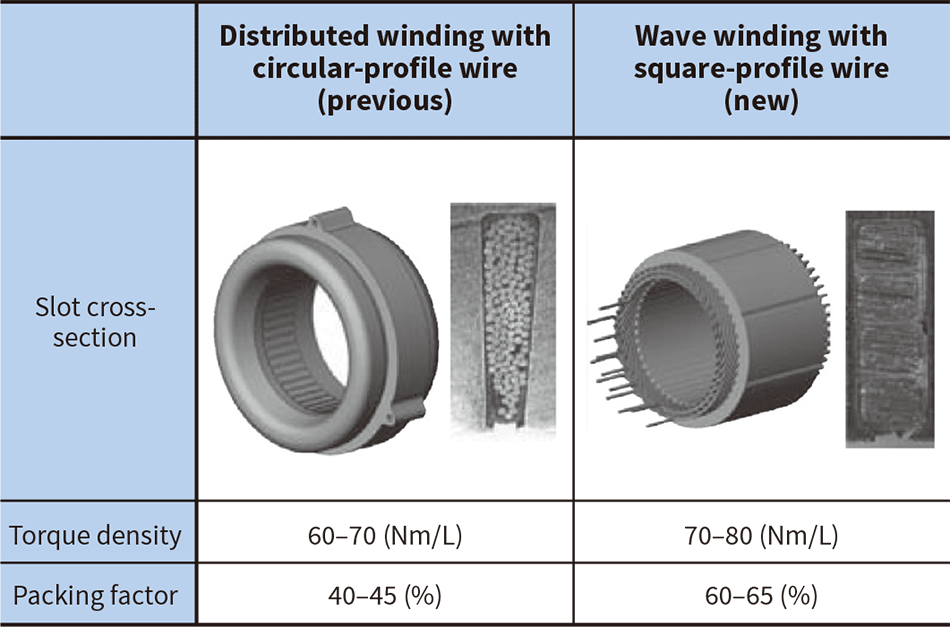 Interest in vehicle electrification has grown amid the current trend toward tighter regulations on vehicle fuel efficiency and emissions in response to global environmental problems. Hitachi is working on the development of synchronous motors with interior permanent magnets and a high ratio of output torque to size in order to provide vehicle traction motors with small size, light weight, high output, and high efficiency. Because of the wide variety of output, torque, dimensional, and other motor requirements, this has involved the development of a standard traction motor for electric vehicles that can be adapted to satisfy a variety of different specifications.

The stator winding on the standard motor uses wave winding with square-profile wire to achieve small size and high torque density. Compared to the distributed winding with circular-profile wire used previously, the use of square wire improved the packing factor (cross-sectional area of wire/cross-sectional area of slot) by approximately 20%, and the output torque density (output torque/stator core volume) of the motor by approximately 15%.

To satisfy tighter environmental regulations, Hitachi intends to continue helping meet the demands of electric vehicles by developing the next generation of standard motor technologies.

As applications such as automated driving become more sophisticated, how to go about developing automotive control systems in accordance with safety requirements is stipulated by international standards.

The challenges with past safety requirements included the need for specialists to spend time checking for omissions in the case of vague requirements expressed in natural language, and, in the case of new safety requirements, for time to be spent on their documentation and verification. To overcome these challenges, Hitachi has worked in partnership with the Aoki Laboratory at the Japan Advanced Institute of Science and Technology to use logical expressions to eliminate vague wording and to develop the following techniques.

When these techniques were utilized for the safety requirements of electric power steering, the length of the requirements text was reduced by 30% compared to the previous specification written in natural language and the time taken for verification was reduced to 1/10th. The efficacy of these techniques for use with the International Organization for Standardization (ISO) 26262 standard for functional safety have been verified by a third-party testing agency. Through the wider adoption of these techniques, Hitachi intends to contribute to the accelerating progress of the automotive industry by enhancing the safety and reliability of automotive control systems. 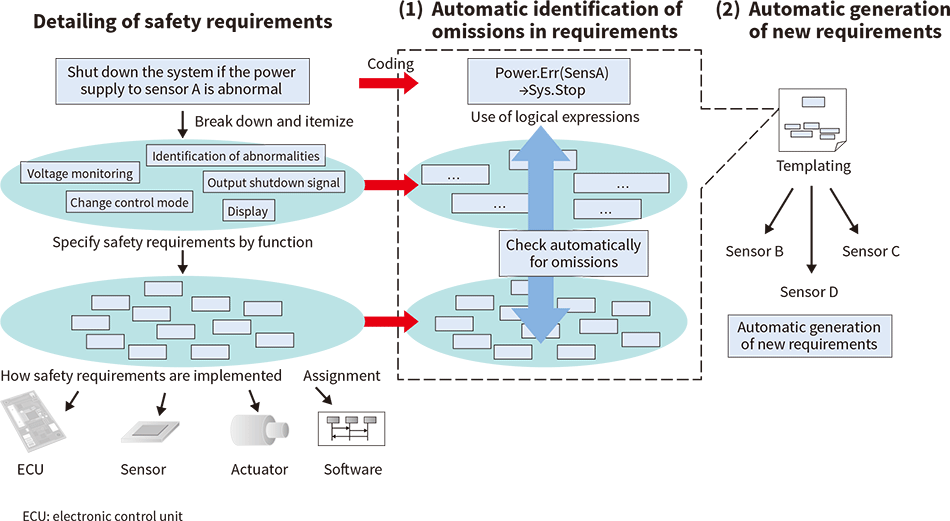