In response to the societal challenges that come with rising energy consumption, including the depletion of fossil fuels and global warming due to carbon dioxide (CO2) emissions, Hitachi has developed a thermoelectric conversion module that can recover energy from previously unused heat sources such as factory waste heat or vehicle exhaust heat ranging from low temperatures of less than 200°C up to 500°C.

Hitachi has succeeded in giving a thin film with a nanocomposite structure made of manganese silicide (MnSi1.7) and silicon (Si) the low thermal conductivity (1 W/km or less) needed to provide the material performance for electrical conversion with efficiencies of 5% or more for medium to high-temperature waste heat at 500°C. It has also succeeded in synthesizing the material in bulk with a nanocomposite structure, the form in which it is used in the thermoelectric conversion module*.

In the future, Hitachi hopes to obtain electric power from the waste heat of vehicles and engines by improving material performance and developing highly reliable thermoelectric conversion modules that can withstand high temperatures.

*
This work was supported by Future Pioneering Program “Research and Development of Thermal Management and Technology” commissioned by New Energy and Industrial Technology Development Organization (NEDO) and TherMAT. 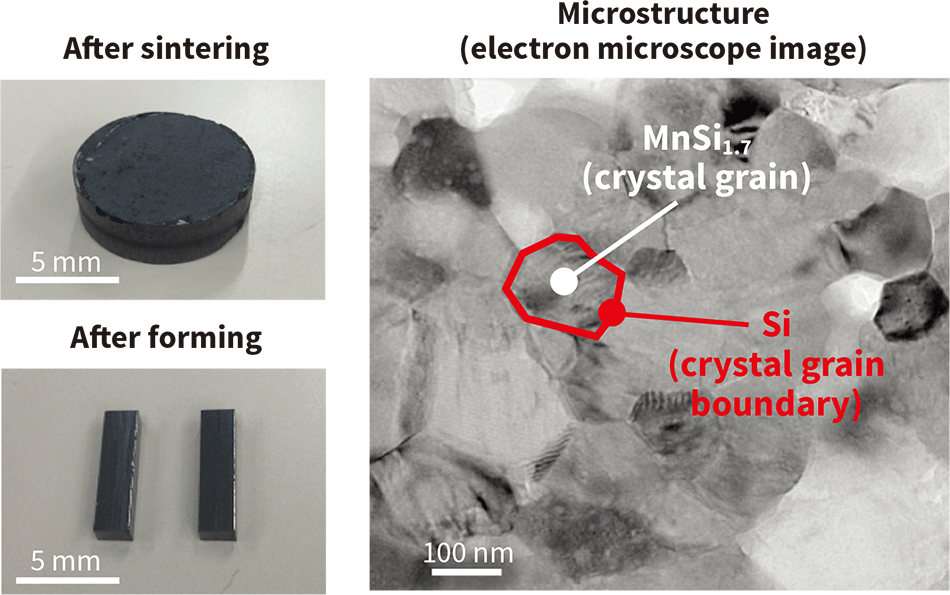 Hitachi Cambridge Laboratory is researching antiferromagnetic spintronics against a background of interest in spintronics as a revolutionary next-generation device technology with low power consumption.

Because the theoretical upper limit on frequency for antiferromagnets is in the terahertz (THz) range, which is higher than the gigahertz (GHz) range of ferromagnets, they have potential uses for building devices capable of very high speeds. Joint research with the Czech Academy of Sciences, the University of Nottingham, and others has succeeded in demonstrating multi-level switching of electrical pulses. Specifically, electrical resistance was successfully alternated between reproducible states with multiple levels by applying three consecutive 50-ms electrical pulses in a copper-manganese-arsenic (CuMnAs) device alternately in two directions.

Future work will aim to achieve high-speed multi-level switching for use as non-volatile programmable synapses for artificial neural networks. Research and development will also proceed in areas such as new sensing devices that utilize the high speed of antiferromagnets.

To facilitate the early detection of cancer by increasing the proportion of people screened, Hitachi is working on developing core technologies for next-generation cancer screening techniques that are easy to use on everyone.

The latest development is a system that uses nematodes (roundworms) to screen for cancer by taking advantage of an attribute of the worms whereby they are attracted to the smell of urine from cancer patients and repelled by that of healthy people (chemotaxis). The system automates each step of the screening process, with automatic dispensing, image acquisition, and image analysis. It uses the brightness of light (luminance) as the basis for estimating the number of worms, eliminating the need to perform a visual count, which was how the data was acquired in the past. A quality assurance technique has also been established to ensure comprehensive cancer screening coverage, using the level of worm movement obtained by continuous automatic image acquisition and analysis as an indicator.

In the future, Hitachi intends to contribute to the early detection of cancer through the practical implementation of nematode-based cancer screening, utilizing open innovation and undertaking joint research and development with Hirotsu Bio Science Inc. 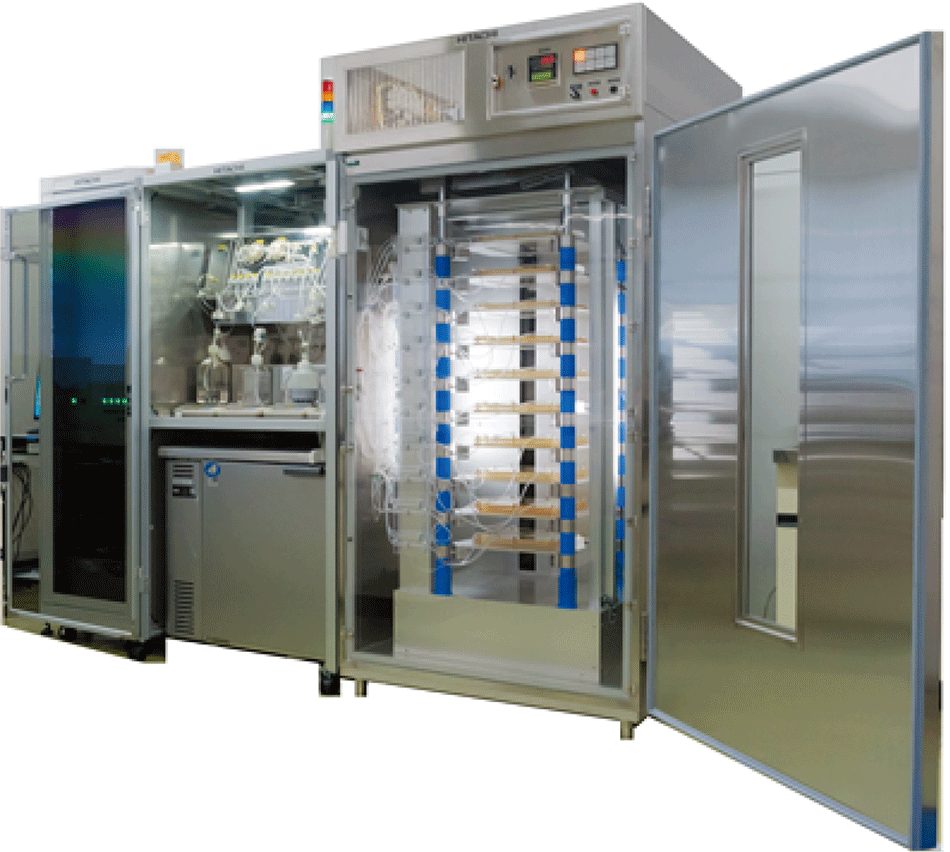 Regenerative medicine is a new form of therapy based on the use of human tissue and other cells, and is recognized for its potential to provide cures for conditions that have been difficult to treat in the past. For this purpose, Hitachi has developed closed-system automated cell culture equipment that can produce cells safely and with high quality and quantity.

The equipment can culture cells suitable for medical use thanks to its use of a fully closed system of fluid supply tubes and culture vessels that provide excellent sterility. It is capable of culturing more than 109 cells at a time using up to ten culture vessels in parallel, each of which has a 500-cm2 culture area. Developed for use as general-purpose equipment that is suitable for use with a wide range of adherent cells (cells that grow on the culture surface), testing has also verified its ability to culture induced pluripotent stem (iPS) cells in large quantities. The equipment can also be used for the initial differentiation process of producing iPS cell-derived neural progenitor cells, opening up the potential for the high-volume production of cells for regenerative medicine. Deliveries of the equipment to pharmaceutical companies commenced in 2017.

*
Part of this research was supported by the “Project Focused on Developing Key Evaluation Technology: Evaluation for Industrialization in the Field of Regenerative Medicine” of the Japan Agency for Medical Research and Development (AMED).

The latest work involves using simulations to design optimal parameters for device size, inter-device capacitance, etc., and using the IDQD structure to build a prototype two-qubit circuit in collaboration with the Tokyo Institute of Technology and others. The work succeeded in observing, at 4.2 K, the quantum interaction due to the change in current for a single electron transistor (SET) sensor in the stability diagram.

Future work will include optimizing the device structure and utilizing the technology for quantum device control and multi-qubit prototypes.

As Hitachi's Social Innovation Business will require the optimization of infrastructure systems in the future, technology for solving combinatorial optimization problems will become crucial.

For the efficient handling of combinatorial optimization problems, Hitachi has proposed using a CMOS Ising computer, which works on a new computing principle. An Ising computer is able to handle combinatorial optimization problems efficiently by using what is known as an Ising model, a simulated replication of the behavior of magnetic materials. A first-generation prototype with a 20,000-bit chip was fabricated using a 65-nm process and its operation was confirmed. A second-generation prototype was then built using a field-programmable gate array (FPGA) of programmable circuit elements, and work proceeded on, not only the hardware, but also the software techniques that would be needed for the practical implementation of a CMOS Ising computer. A graph embedding technique was developed to provide a simple way to embed complex real-world problems into a regular hardware structure, and its ability to execute optimization problems on the Ising computer with faster speed than past techniques was demonstrated. Hitachi is working on a technology that proposes strategies and explains the grounds for them using newspaper articles and white papers. To develop strategies based on evidential information is essential for companies and public institutions. The goal of this research is to achieve an artificial intelligence (AI) that can debate strategies with humans.

To propose strategies, the computer needs to interpret the meaning contained in text data from diverse sources and, from them, automatically collect and classify evidential information such as the reasons behind solutions or their counterexamples. Accordingly, Hitachi developed the following techniques and verified their effectiveness.

When provided with topics of discussion that required decisions to be made based on complex considerations, a prototype system that incorporated these techniques was able to present arguments for and against (Agree/Disagree) solutions by using collated sentences about the pros and cons of a solution from a variety of different viewpoints.

In the future, Hitachi plans not only to enhance natural language interpretation techniques for understanding the content of written text, but also to develop techniques for drawing on a mix of knowledge from written sources to generate new strategies and to assess their suitability by collating the advantages and disadvantages, the costs versus the benefits, and so on.

Along with advances in the Internet of Things (IoT), social infrastructure systems such as those for electric power, transportation, and distribution have become increasingly large and complex over recent years. In the case of regional power system infrastructure, for example, which is made up of a large number of power plants and substations, the current practice is to use centralized control systems in which a control center handles the aggregation and calculation of data such as electric power generation capacity and sends out instructions to individual sites about how to transmit and distribute power. However, as operation becomes more complex due to the wider adoption of smart grids (next-generation power transmission networks) and the introduction of electricity market liberalization, the use of centralized control systems for system-wide optimization will impose very large computational loads, potentially making real-time performance impractical.

Hitachi has been looking at the collective behavior of animals as a way of resolving this problem. Each individual in a flock of birds or a shoal of fish, for example, determines its direction and speed through interactions (collision avoidance, alignment, and aggregation) between itself and its neighbors. Through the ongoing repetition of these interactions, animals are able to retain an orderly and regimented formation, with the ability to change direction as a single entity and to exhibit coordinated group behavior. That is, through each individual's interactions with its neighbors, this collective behavior of animals gives a group the appearance of acting like a single entity despite lacking any leader (analogous to the control center in a social infrastructure system) keeping track of the overall situation of the group.

Taking note of this, Hitachi has developed a decentralized cooperative system made up of a large number of sub-systems that draws on the same principles of interaction as between animals engaged in collective behavior, without the need for a leader. The overall decentralized cooperative system corresponds to a flock, shoal, or herd of animals, while each sub-system corresponds to an individual bird, fish, or other animal. Whereas a centralized control system has a control center to aggregate all of the data in a single location and handle the calculations needed for system-wide optimization, the process of optimization in a decentralized cooperative system is distributed across the individual sub-systems. Each sub-system exchanges the necessary data with its neighbors such that system-wide optimization is achieved through the ongoing repetition of this process (see Figure 8.1). This significantly reduces the communication overhead associated with centralized data collection and the computational load of optimization, enabling real-time performance to be maintained even as the number of devices being controlled increases or in the event of unexpected changes in circumstances.

The system works by executing algorithms on the sub-systems that perform the following repetitive operations.

To test the effectiveness of the system, Hitachi has built a simulator that replicates a large group of factories, each of which is equipped with a production management system. Based on the exchange of data on production efficiency between the interconnected factories, the production management systems generate production plans by exchanging requests such that production is increased at sites where efficiency is high and reduced at sites where efficiency is low. The number of factories in the simulation was varied between 16 and 1,024 and their collective profitability was determined. The results indicated that the profitability would be the same as that achieved using centralized control. When a prototype environment simulating 16 factories was created, the amount of electric power supplied to the factories varied, and the resulting changes in profitability were measured, it was found that profitability equivalent to that of centralized control could be achieved 50-times faster (see Figure 8.2). This flexibility to handle the addition and removal of sub-systems and to adapt quickly to changes in circumstances means that the decentralized cooperative system also has potential applications in areas like supply chains and distribution systems as well as in production management systems.

In the future, Hitachi plans to contribute to the realization of Society 5.0 by further developing this technology, including through the use of AI and open innovation, so as to build social infrastructure systems that are able to operate autonomously and in harmony with humans and the environment. 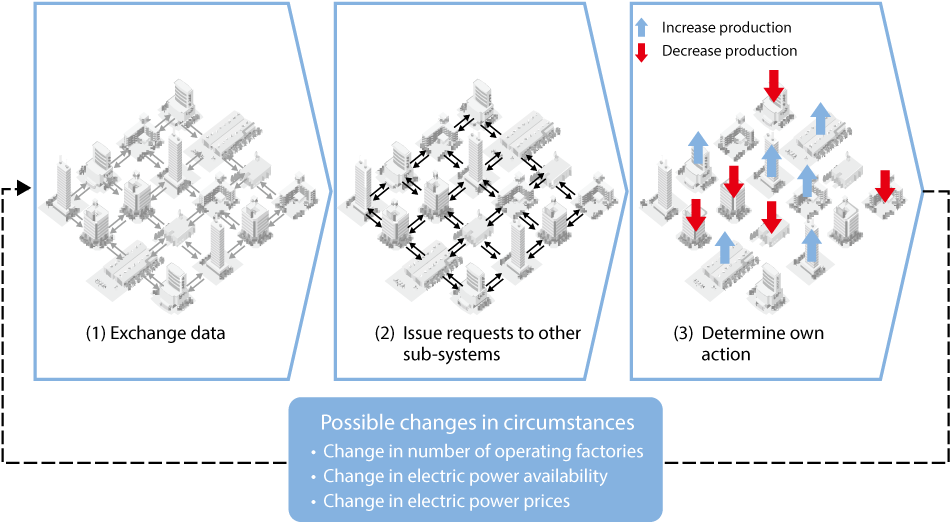 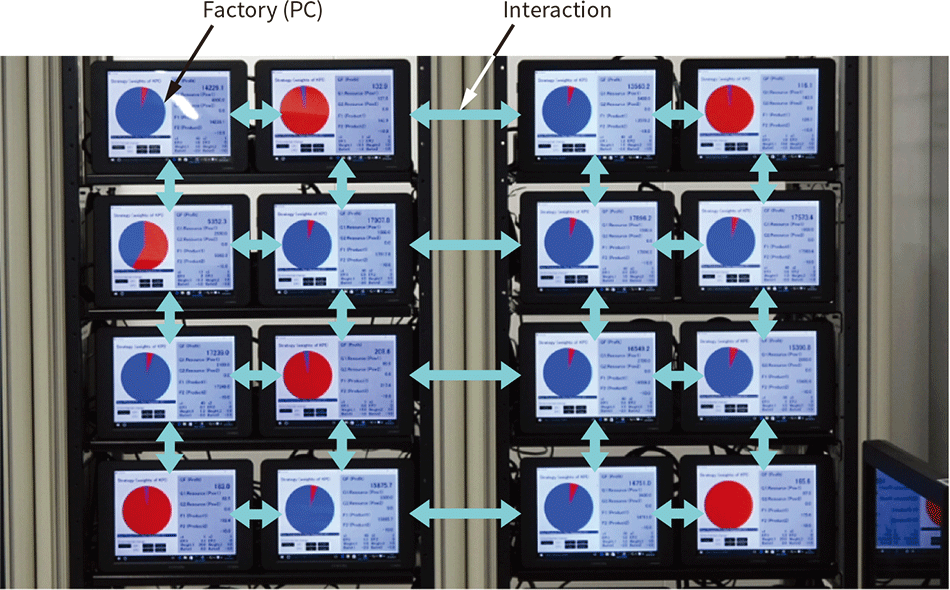