Compared to other modes of transportation such as cars and aircraft, railway systems impose a low load on the environment. Furthermore, the traction systems used in rolling stock are achieving higher levels of performance and they are being made more efficient, smaller, lighter, and reliable through improvements in motor efficiency and advances in power devices, the core technology of power electronics. Hitachi is building energy-efficient traction systems based on use of lithium batteries, motors designed for lower harmonic losses, and compact inverters that use low-loss power devices made from the new material of silicon carbide. Through these developments, Hitachi is expanding its global operations to supply railway systems with excellent environmental, comfort, and safety performance while also satisfying demands from railway operators for energy efficiency. 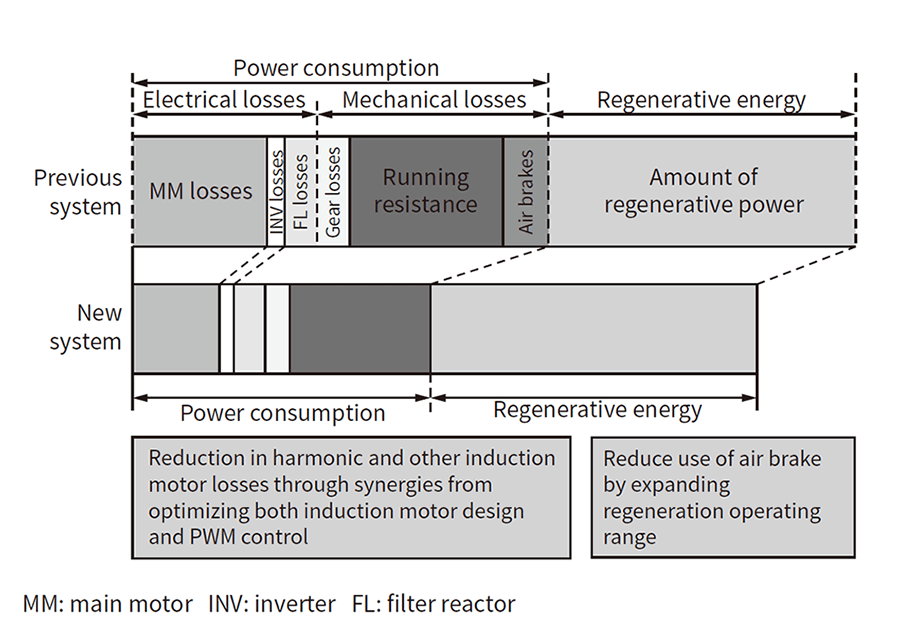 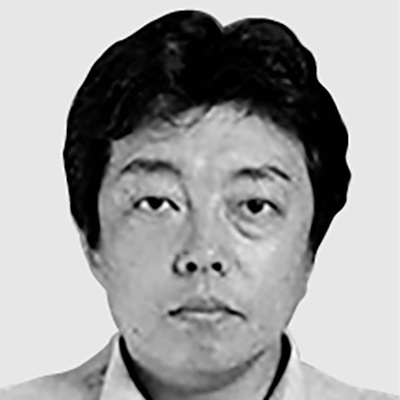 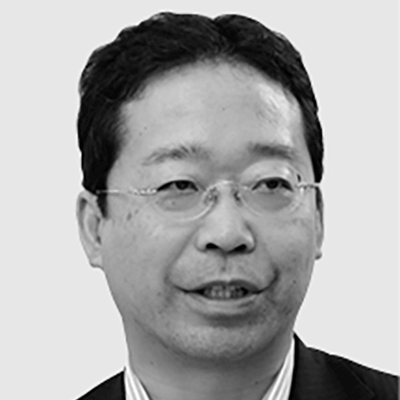 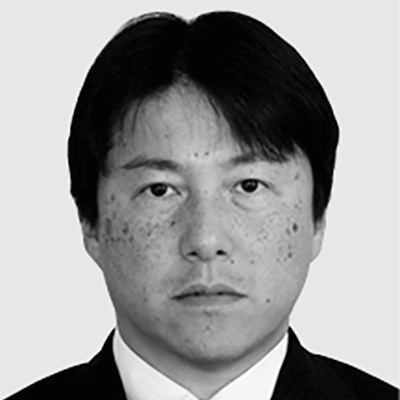 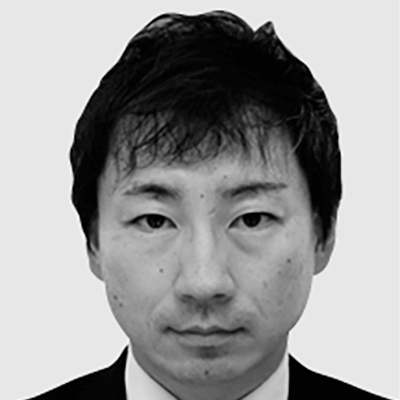 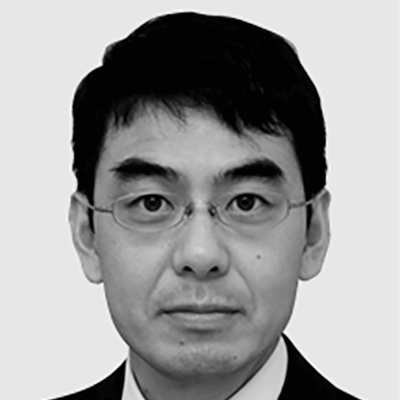 Awareness of the need for environmental protection is growing internationally, with a step up in demand for energy efficiency measures such as the switch to electric drive to help prevent global warming by cutting carbon dioxide (CO2) emissions and to minimize atmospheric pollution from the exhaust gases of internal combustion engines. This is why railways have taken on such an important role, their efficiency being considerably higher than other forms of transportation such as cars or aircraft(1).

The traction systems used in rolling stock are achieving higher levels of performance and are being made more efficient, smaller, lighter, and reliable through the use of systems based on lithium batteries, improvements in induction motor efficiency and advances in power devices, the core technology of power electronics.

This article describes technologies for addressing these issues by making traction systems smaller and lighter and by making them more energy-efficient.

Table 1 lists technologies for making inverters more energy-efficient and for making them smaller and lighter. Similarly, Figure 1 shows how power consumption can be reduced.

To make traction systems more energy-efficient, per-vehicle rolling stock power consumption can be significantly reduced by expanding the range of operation over which regeneration can be performed to minimize use of air brakes. Likewise, the high losses of induction motors mean that power consumption can also be reduced by focusing on these losses to optimize both induction motor design and pulse width modulation (PWM) control. Another important measure is to capture regenerative energy in a battery for reuse when the train is under acceleration. The adoption of more energy-efficient operating patterns (train speed profiles) also has an important part to play.

Meanwhile, low-loss power devices are vital for making inverters and other traction systems smaller, with growing use of such devices made from the new material of silicon carbide (SiC) rather than the silicon (Si) substrates used in the past. Smaller size and lighter weight are also being achieved by developing ways to improve the cooling efficiency of power devices and by reducing the component count in inverters(2). 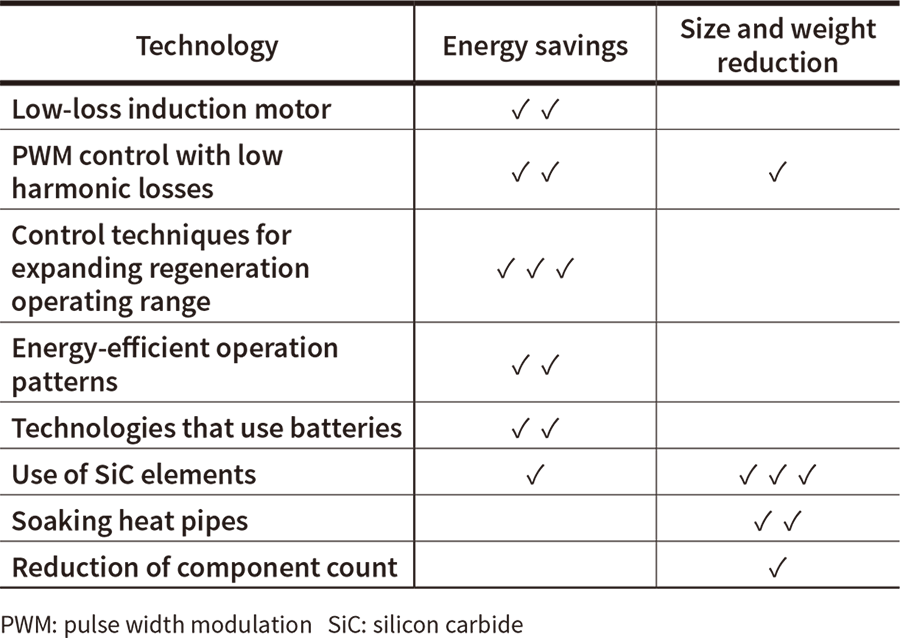 The table indicates the relative contribution of different technologies for making inverters more energy-efficient and for making them smaller and lighter.

Highly efficient traction systems are being developed using PWM control together with induction motors with reduced harmonic losses that are capable of regeneration over a wider operating range. 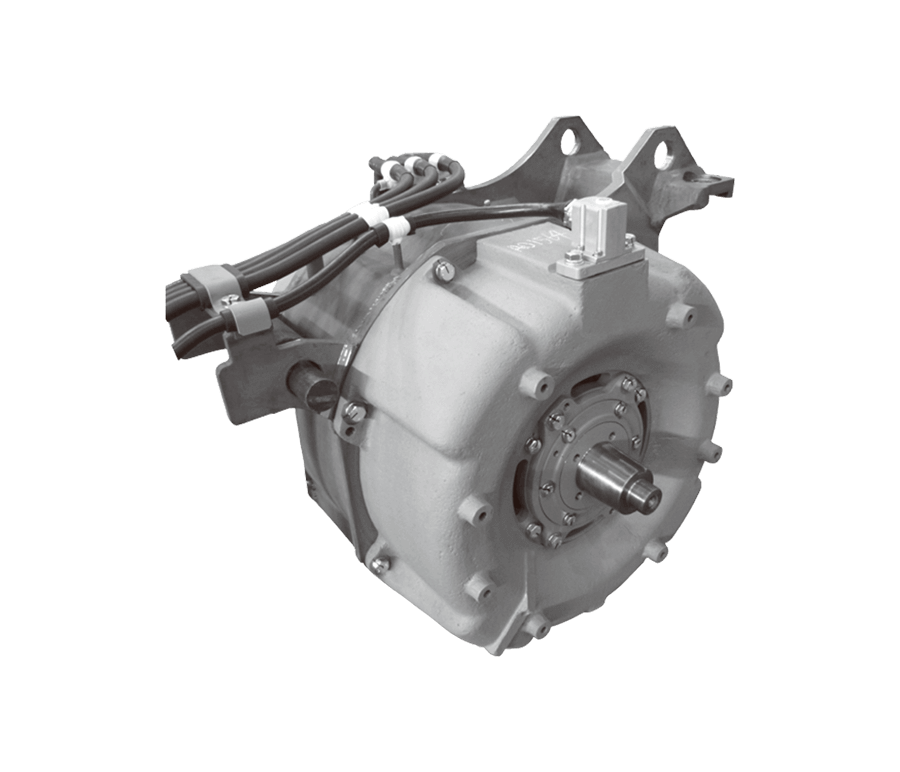 The motor achieves a commercial efficiency of 97% through changes to the insulator and optimization of the gap, rotor conductor, and stator winding layout.

Along with induction motors, greater use is also being made of permanent magnet synchronous motors as a way to improve the efficiency of rolling stock traction drive. In terms of rolling stock systems, depending on operating conditions, some railway lines suit the former type of motor and some the latter. It is also the case that further efficiency improvements are needed in induction motors for reasons of system configuration and ease-of-maintenance.

The losses in an induction motor can be split into copper losses, iron losses, mechanical losses, and stray load losses, which include harmonic losses. Copper and iron losses depend on the fundamental (sine wave) component of the drive waveform and mechanical losses on mechanical factors when the motor is running. Harmonic losses, in turn, are made up of losses associated with the design of the induction motor and those associated with the inverter voltage waveform. Past measures for improving the efficiency of induction motors have focused on copper and iron losses. In addition to these existing measures, changes to the insulator and optimization of the gap, rotor conductor, and stator winding layout mean that the new system achieves a commercial efficiency of 97% with lower losses during inverter drive operation (see Figure 2)(3), (4).

3.2 Technologies that Use Batteries 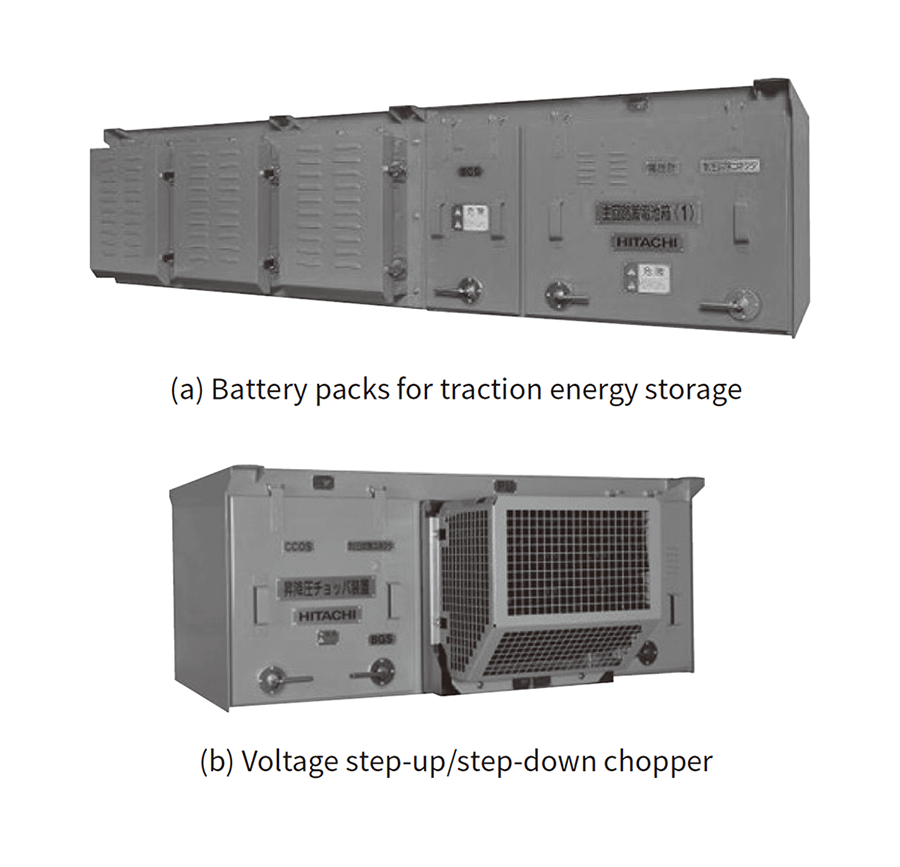 The system is made up of battery packs for traction energy storage that contain rechargeable lithium batteries and a chopper for stepping the voltage up or down that is used to control battery charging and discharging. It is used in tandem with a variable-voltage, variable-frequency (VVVF) inverter controller to capture regenerative power and supply it back for use as traction power.

One way to use batteries to store energy for rolling stock traction that has already been commercialized by Hitachi is the series-hybrid traction system. This works by combining batteries with a diesel engine to reduce fuel consumption(5), (6). Two other functions that use battery control in traction systems are those for regenerative energy capture and for enabling regeneration at higher speeds. Hitachi has extended the use of these to highly efficient regeneration systems for making better use of electric power(7)-(9).

Hitachi has now gone on to commercialize an onboard energy storage system that has been supplied to the 5000 series rolling stock of Keio Corporation. The system is made up of battery packs for traction energy storage that contain rechargeable lithium batteries and a chopper for stepping the voltage up or down that is used to control battery charging and discharging. It is used in tandem with a variable-voltage, variable-frequency (VVVF) inverter controller to capture regenerative power and supply it back for use as traction power. Figure 3 (a) shows a photograph of the battery packs and Figure 3 (b) shows a photograph of the chopper.

In regenerative power storage mode, the onboard energy storage system charges the batteries to prevent voltage rises on the overhead wires if braking occurs when there is insufficient load for the regenerated electric power.

In onboard B-CHOP (regenerative power absorbing equipment) mode, the onboard energy storage system on a train that is coasting or stopped absorbs the excess power if the voltage on the overhead wires rises above a certain level by using it to charge its batteries. Along with maintaining voltage stability on the overhead wires, this also provides a load for regenerative power from other rolling stock operating on the same power feeding system.

In emergency power supply mode, the power from the batteries is supplied to the VVVF inverter controller to enable the rolling stock to continue at a slow speed. This provides the ability to travel short distances while the supply of power to the rolling stock from the overhead wires is interrupted, such as during a power outage.

The development work included identifying the optimal values for the regenerative power storage and onboard B-CHOP modes based on the voltage of the overhead wires as well as evaluation and verification of the per-vehicle savings achieved. Similarly, the operation of emergency power supply mode was verified first by a trial at the depot using an arriving train, and then by a test run on the Keio Line where it crosses the Tama River. This demonstrated that the train was able to move off the bridge under battery power without any power supplied from the overhead wires. In the field of power devices, the 4.5-kV gate-turn-off (GTO) thyristors with a Si substrate that first emerged in the mid-1980s were followed by insulated-gate bipolar transistors (IGBTs) able to operate with voltages in excess of 2 kV, with Hitachi commercializing the world's first IGBT inverter for use on the Hibiya Line of Tokyo Metro(11).

Recent years, meanwhile, have seen progress on the development of low-loss power devices that use the new material of SiC. A feature of SiC is that its higher breakdown field strength means that elements can be made only one-10th as thick as those using Si. A consequence of this is that, in theory, the resistance during conduction can be made at least two orders of magnitude less.

Approximately 90% of electrified track in Japan uses 1.5-kV overhead wires. Hitachi lead the world by embarking on the development of a 3.3-kV SiC Schottky barrier diode (SBD) for railway applications(12)-(14). Inverter losses were also reduced by 35% by commercializing hybrid modules that combined these SiC-SBDs with enhanced IGBTs and by using a soft-gate technique to reduce IGBT losses(15)-(17).

Hitachi also led the world by releasing its “next High-power-density Dual” (nHPD2) full-SiC modules with a 2-in-1 configuration (elements for upper and lower arms housed in the same package) and high output density, using SiC metal-oxide-semiconductor field-effect transistors (MOSFETs) as the switching elements(18) (see Figure 4). The size of the 2-in-1 modules is 140 mm × 100 mm. This helps increase the mounting density of the inverter by reducing the mounting footprint of the inverter elements by approximately 50% compared to previous modules.

Requirements such as battery packs being located under the floor are driving demand for smaller inverters. Along with use of full-SiC modules with high output density, Hitachi has also improved cooling system performance and made peripheral components smaller to help achieve this. As a result, the newly developed inverter is approximately 50% smaller in volume than its predecessor(19) (see Figure 5). 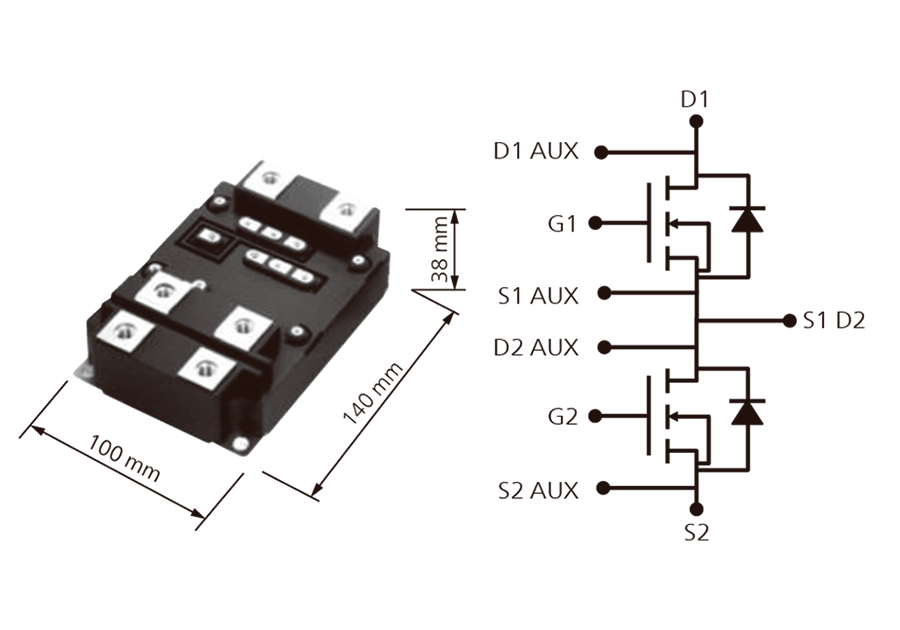 The figure shows a photograph and circuit diagram for the full-SiC module with a high output density that uses SiC metal-oxide-semiconductor field-effect transistors (MOSFETs) and a 2-in-1 configuration in which the elements for the upper and lower arms are housed in the same package. 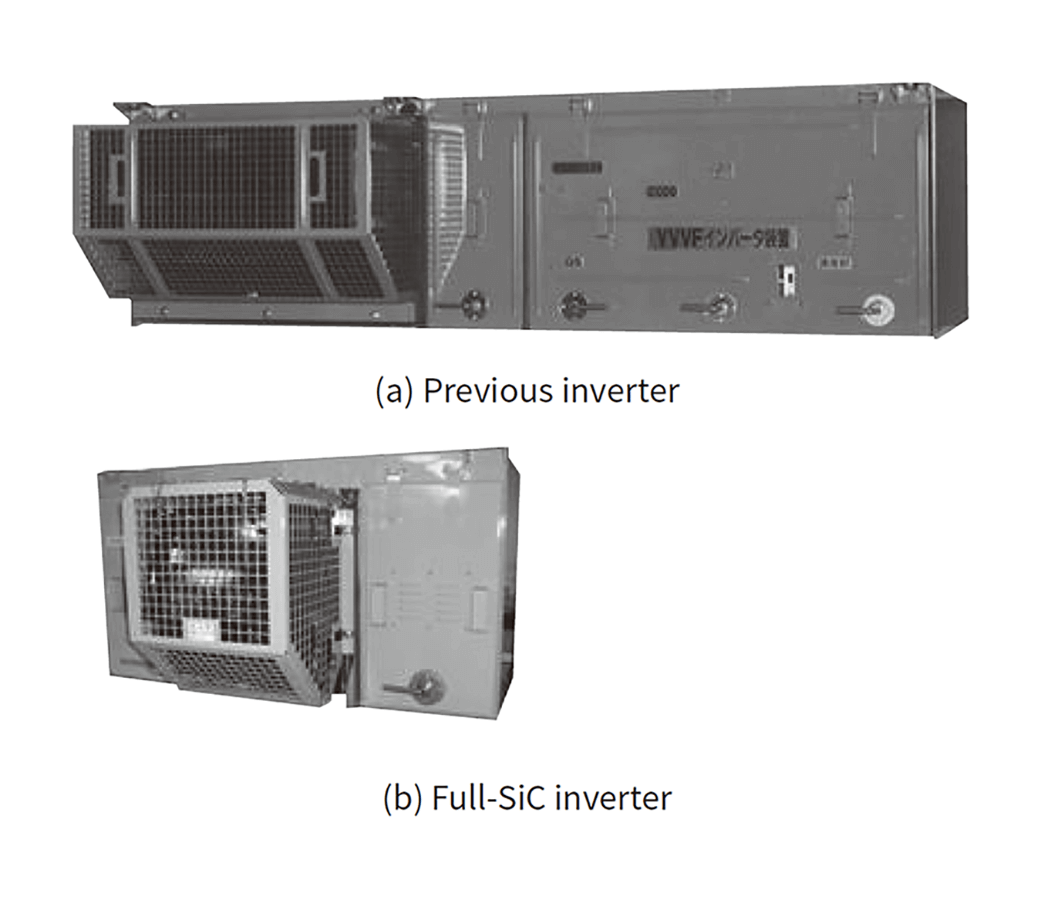 Hitachi used full-SiC modules with high output density, improved the cooling system performance, and made the peripheral components smaller to reduce the volume of the new inverter by approximately 50% compared to its predecessor.

Hitachi has utilized a combination of new technologies to develop energy-efficient traction systems that are small and light, involving advances in specific technologies such as the latest power devices (including those that use SiC), highly efficient induction motors, and systems that utilize batteries, and also the use of precise and sophisticated simulations to analyze in detail the losses that occur in moving trains and their traction systems.

Along with meeting demands for energy efficiency from railway operators, Hitachi intends to continue with further global expansion to supply railway systems with excellent environmental, comfort, and safety performance.