Hitachi-UTokyo Laboratory has published proposals for the electricity systems of the future as part of work toward achieving Society 5.0. There has been widespread public discussion of next-generation energy systems with a role in decarbonization over recent times and the laboratory followed up publication of a first edition of its proposal in April 2018 with continued study on the following two topics. This work was published in a second edition of the proposal*.

The laboratory has formulated a medium- to long-term vision for energy systems with a timeframe that extends beyond 2050, and has studied a number of different future scenarios for systems and policies aimed at achieving this vision. Because of the need to prepare a diverse range of technical options given the degree of uncertainty that surrounds technology development, a common quantitative and qualitative evaluation platform is needed that can be shared by a wide variety of stakeholders. Industry, academia, and government are working together to devise and identify diverse use cases and determine the requirement specifications for analysis tools and standard data while also discussing the extent of publication and disclosure in information and data sharing. 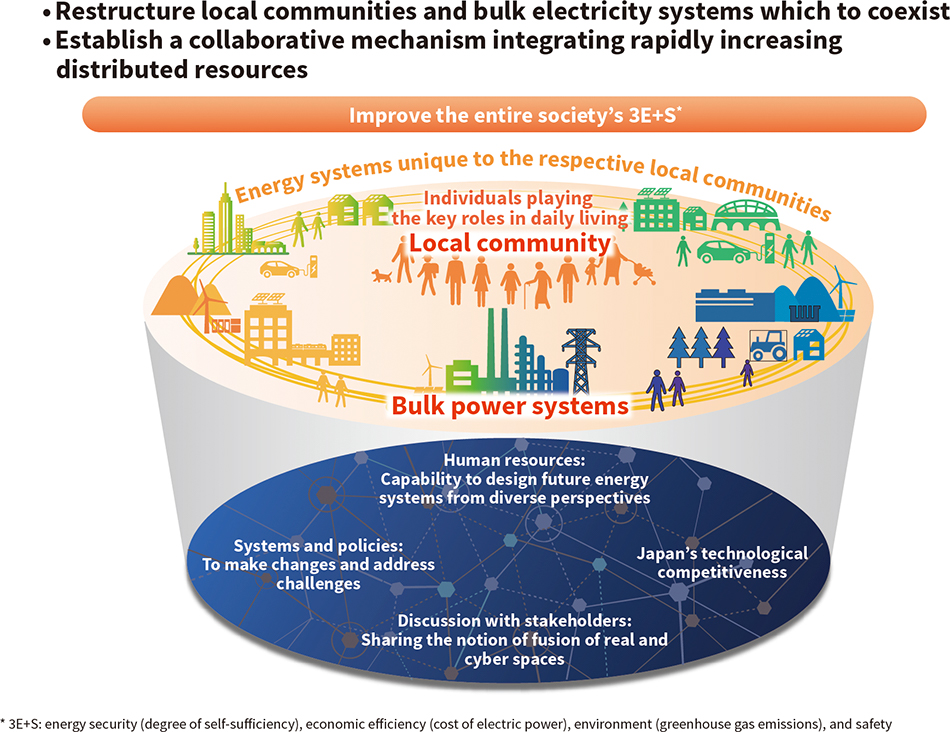 Predictive detection techniques have been proposed in the past for monitoring plant condition by using deviations in the correlations between plant operation data to determine the state of machinery. However, these did not include functions for identifying equipment that has undergone a change or the reasons for this happening. Accordingly, Hitachi has drawn on basic research and the knowledge and expertise it has gained as a builder of nuclear power plants to develop physical models that collate the cause-and-effect relationships between changes in operational data and the effect this has on machinery. By also incorporating previous predictive detection techniques into the models, it is possible to perform all-inclusive analyses that extend from predictive detection to determining the equipment affected and the relevant factors. This enables the provision of new operation and maintenance (O&M) solutions that show whether machinery is operating correctly and provide the information for deciding what to do next when something out of the ordinary happens.

While testing the efficacy of the technique is currently underway, Hitachi also intends to continue work on enhancements to techniques that use physical models for assessing plant condition, contributing to further improvements in the safety of nuclear power plants and also utilizing this work to enhance the efficiency both of power generation and maintenance at these plants.

Such an investigation requires a radiation detector that is able to operate remotely and reliably for long periods of time in confined spaces with high levels of radiation. Therefore, Hitachi developed a small radiation detector that can be installed on the PMORPH*1 robot for investigating inside primary containment vessels and that is equipped with optic fiber and a scintillator that emits light in response to radiation. By detecting the light emitted by the 2-mm diameter scintillator (a garnet crystal) mounted in the sensor unit, the detector has 10,000 times as much radiation-resistance as a conventional silicon semiconductor detector.

The remote measurement technology was applied to an investigation of the primary containment vessel in the Unit 1 at Fukushima Daiichi Nuclear Power Station in March 2017 where it successfully recorded both dose rate data and images*2. The technology will be applied to future melted fuel investigations, thereby contributing to the Fukushima revitalization.

*1 :
The name derives from a combination of primary containment vessel (PCV) and metamorphosis.
*2 :
Developed as a project of the International Research Institute for Nuclear Decommissioning and funded through the Project of Decommissioning and Contaminated Water Management of the Agency for Natural Resources and Energy.