Tabletop SEMs are used to observe microscopic structures on the surfaces of materials in a wide range of industries, including materials and biotechnology. Benefiting from the convenience of not having to use sample preparation methods such as metal deposition that are typically required for electron microscopy, they have also found widespread use in biomedical applications that in the past have largely used optical microscopes. This article describes work aimed at utilizing tabletop SEMs in clinical and other healthcare applications, including a study of how they can be used in renal biopsies and an example application in testing the drug susceptibility of bacteria. 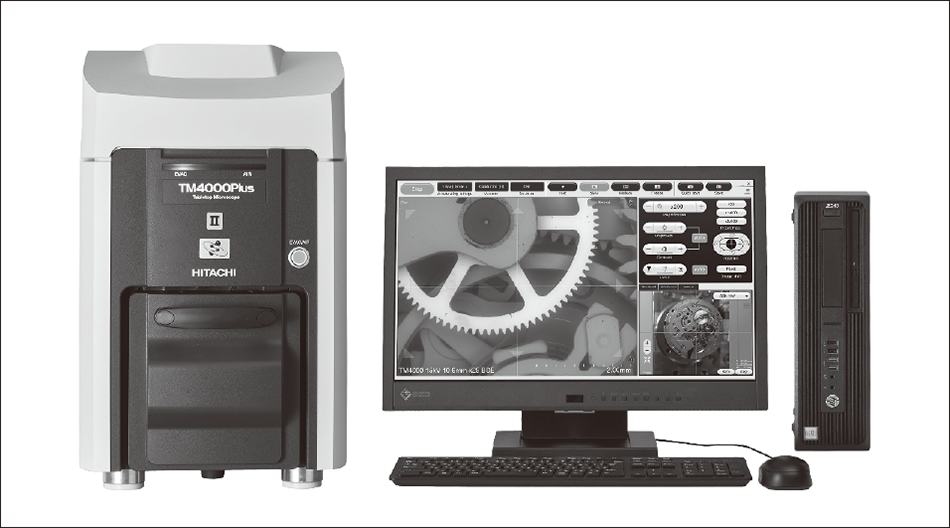 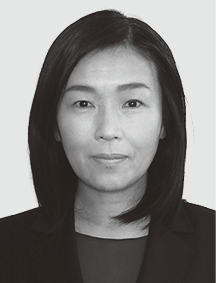 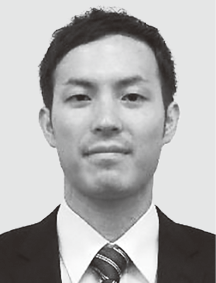 The observation of tissue morphology has been part of the practice of pathology for more than 100 years, with optical microscopes playing an important role in this work.

Samples of a size that can be observed under a microscope using transmitted light are made close to transparent to allow more light to shine through. For this purpose, they are stained with special dyes to highlight differences in color. Advances in dyeing have been underpinning pathology for many years. As it is the green wavelengths of light around 500 nm that are easiest to see with the naked eye, the lower limit for observation using conventional optical microscopy is around several hundred nanometers. Viewing anything smaller than this requires an electron microscope.

Scanning electron microscopes (SEMs) and transmission electron microscopes (TEMs) are in widespread use across a range of industries as instruments to observe the microstructural features of materials. Electron microscopes work by exposing the sample to an electron beam and forming an image from the number of electrons emitted by the material. While this means they produce a grayscale image, because they are capable of resolutions in the range of 1 to 10 nm, or even smaller, they are widely used in applications that require finer detail.

This article describes the features of a tabletop SEM developed for use with the sort of samples that would more normally be observed using an optical microscope. It also presents research pursuing the potential of the microscope for the tissue observation of renal biopsies and testing the drug susceptibility of bacteria so that greater use can be made of electron microscopes in medical practice and other healthcare applications.

Exposing a sample to a negatively charged electron beam causes the sample itself to become charged. The more the electron beam is directed at this charged sample surface, the more it is deflected, preventing the signal from reaching the detector. This distinctive property of electron microscopes is why it is common practice to coat samples with metal. As well as the work involved in doing this, the problem is that it requires a dedicated metal deposition system in addition to the electron microscope.

In response, Hitachi High-Tech Corporation has developed an SEM that is able to be installed on a tabletop and does not require metal deposition or any of the other pretreatments commonly used in electron microscopy (see Figure 1). The control of the vacuum evacuation system in the tabletop SEM allows a minute quantity of air to enter the sample chamber, maintaining the atmosphere above the sample at a pressure of between several pascals and several tens of pascals. The need for metal deposition or other such techniques is avoided because the air at this pressure is able to reduce the charge buildup on the sample surface(1). Being both compact and simple, the new instrument is also finding increasing use in applications where electron microscopes have not been used in the past, including biomedical uses and quality inspection in parts manufacturing.

Use for Tissue Observation of Renal Biopsies 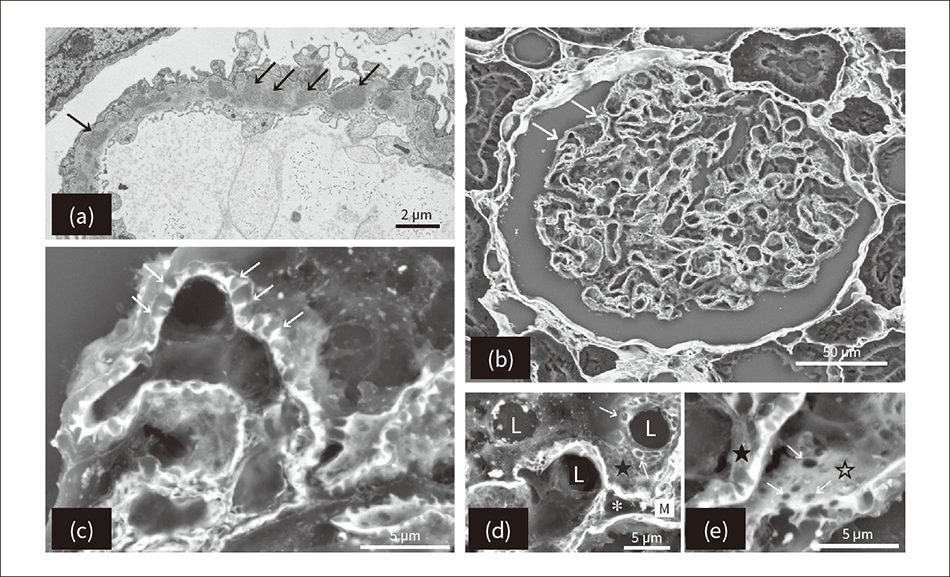 The procedure for a renal biopsy involves using a needle to collect a tissue sample from the kidney that can be observed under an optical microscope. More recently, it has also included analysis under an electron microscope as well as fluorescent antibody testing to obtain immune response information based on the deposition pattern, if any, formed by immunoglobulins or complement that function as an antibody. Nowadays, these three types of information are used in combination for disease identification and prognosis, and to determine a treatment strategy.

Most electron microscopy has been done using TEMs, which requires a high level of knowledge and skill for sample preparation and image assessment. It can also take several weeks to obtain a diagnosis. Moreover, as kidney disease is not always accompanied by lesions occurring uniformly in the organ, it may not be possible to determine whether a problem exists unless the lesions are to be found and observed. This means that, even when such abnormalities are present, a biopsy may be deemed normal if none happen to be visible in the small region of tissue covered by the TEM image.

In response, a tissue examination technique has been developed based on the low-vacuum tabletop SEM with the aim of using it for quick and simple testing(2), (3). The low-vacuum SEM is able to view tissue samples prepared on glass slides as they would be for an optical microscope, and to do so at high magnification without the need for special pretreatment such as metal deposition. It can also provide an overview of all parts of the renal biopsy tissue as would also be possible when using an optical microscope. In other words, because they can observe across a wide area in such a way that abnormalities are difficult to miss, low-vacuum SEMs offer considerable benefits.

In this way, the use of a low-vacuum SEM to view the three-dimensional morphology of a renal biopsy specimen prepared for an optical microscope uncovered details of changes in the tissue that previously were not able to be observed.

The images on the left (a) show that, whereas susceptible bacteria exhibit morphological changes 60 minutes after the addition of the antibiotic imipenem (IPM), no such changes are observed for resistant bacteria. The graphs on the right (b) show the relationship between bacteria width and count for the susceptible and resistant bacteria respectively.

Antimicrobial resistance (AMR) is recognized as being one of the most serious health problems facing humanity over the coming decades(5). This means that finding ways to counter the emergence and spread of resistant microorganisms and the development of tests and therapeutic drugs are challenges for all of humanity.

With resistant microorganisms spreading around the world, antimicrobial susceptibility testing (AST) is used as a way to determine whether or not infectious pathogens such as serious bloodstream infections can show susceptibility against candidate antibiotics, and thereby to identify which drugs will work best against different microorganisms(6).

Trace liquid dilution and disk testing are two standard AST methods in current use. Unfortunately, both take about three days to perform, requiring blood culturing to enable detection of the microorganisms in the patient’s blood, isolation and culturing of the infectious pathogen, and AST culturing to detect whether the bacteria will multiply in the presence of the drug. As it is known that delays in treating patients with an appropriate antibiotic will lower their survival rate(7), how to speed up the culturing and other test procedures is a critical issue.

In response to this clinical challenge, Hitachi has worked with Professor Didier Raoult of the Institut Hospitalo-Universitaire Méditerranée Infection (IHU) in France to develop an SEM-AST method that uses a tabletop SEM to determine whether an infectious pathogen is antibiotic-resistant and to select an appropriate drug(8). By observing a bacteria treated with antibiotic at SEM image resolution, the method identifies minute changes in the form of the bacteria that occur immediately after application of the antibiotic. That is, unlike previous methods, it does not need to allow time for bacteria multiplication and only requires a quick administration of the drug to ascertain whether the pathogen is resistant or susceptible to the antibiotic.

The study conducted susceptibility testing for the antibiotic imipenem (IPM) used against the Escherichia coli (E. coli) strain of bacteria. Using strains of E. coli that had already been tested for susceptibility to IPM by conventional methods, 106 to 107 CFU/ml samples were prepared on Mueller-Hinton (MH) broth and administered with a breakpoint concentration [European Committee on Antimicrobial Susceptibility Testing (EUCAST) minimal inhibitory concentration (MIC)] of IPM and then stirred and incubated at 37 °C for 60 minutes. After administration of the IPM, bacteria were smeared onto a glass slide, observed at low-vacuum using a tabletop SEM, and their width measured from the SEM images. The measurement results showed that, whereas the widths of IPM-susceptible bacteria were considerably wider when IPM was present than when it was not, no such change occurred in the width of IPM-resistant bacteria (see Figure 3)(8).

That the resistant bacteria showed no morphological change regardless of whether or not the antibiotic was present indicates that the changes in the susceptible bacteria were due to the antibiotic. It has been reported that IPM acts on the penicillin binding protein in the inner membrane of the bacteria, affecting cell wall synthesis, and causing morphological changes in microstructures inside the bacteria(9).

These results indicate that it is possible to differentiate between IPM-susceptible bacteria and resistant bacteria after a very short 60-minute incubation time by using an SEM to identify morphological changes in the bacteria that interfere with cell wall synthesis.

This article has described the use of SEMs for renal biopsies and drug susceptibility testing, two applications where they have not been used in the past.

While numerous studies involving the observation of biological samples using electron microscopes have been published, the large size of these instruments has limited opportunities for their clinical use. Now however, the availability of an SEM that can be installed on a tabletop and that does not require metal deposition or any of the other pretreatments commonly used in electron microscopy opens up the possibility of their use for the rapid provision of diagnostic information in clinical settings. In the future, Hitachi intends to continue working to make this technology available for use with a wide range of different diseases.

The renal biopsy study presented in this article was conducted with the assistance of Sumire Inaga, Department of Anatomy, Faculty of Medicine, Tottori University. Similarly, the work on bacteria testing received considerable assistance from Professor Didier Raoult of the IHU in France among others. The authors would like to take this opportunity to express their deep gratitude.